We take a closer look at the remaining contenders

We take a closer look at the remaining contenders

This is it. This is your last chance to have your say in our search for the ultimate McLaren driver line-up.

With your help we’ve whittled McLaren’s 16 most successful drivers down to four, and now we need you to vote one more time to determine the #McLarenUltimateTeam.

After analysing 70 years of Formula 1 data, our friends at Automation Anywhere revealed that, statistically, the greatest McLaren driver pairing is Ayrton Senna and Lewis Hamilton, but will you vote the same way?

The four remaining contenders – Lewis Hamilton, Niki Lauda, Kimi Räikkönen and Ayrton Senna – all have rock-solid claims to make it to the final two. And to bring you fully up to speed with their credentials, we’ve put together a preview of the last head-to-head contests in the hope it may just help you decide who to vote for via our Twitter and Instagram channels, as well as the McLaren App. 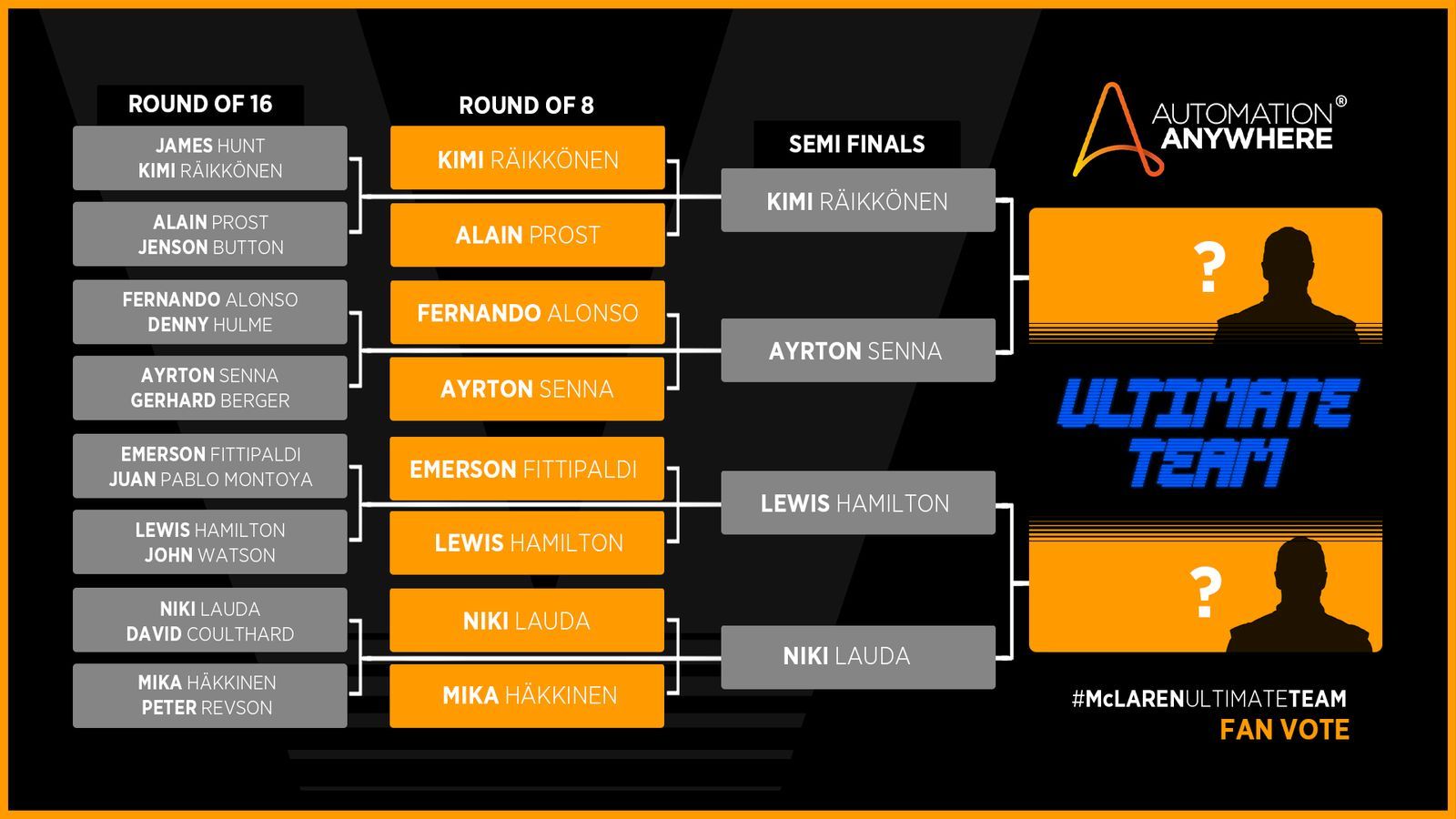 Lewis Hamilton is well on his way to being F1’s most successful driver: six times a world champion; 84 race victories; a world record 88 pole positions and the undoubted potential to burnish those statistics even further over the next few years. Hamilton can do it all: mighty over one lap; excellent in the wet; clinical when making his way through traffic and nerveless in pursuit of victory. Who could possibly stop him being in McLaren’s ultimate line-up? Perhaps the man he considered a mentor…

You will not find a competitor with more heart and courage than Niki Lauda – but for all that he will always, above all, be known as a driver who raced with his head. Niki raced in F1’s golden age and is one of a small cadre of drivers responsible for turning the sport into the global phenomenon it is today. Three times a world champion, his 25 victories span several epochs of F1, racing from the early days of downforce through the ground-effect years and into the savagely-powerful turbo championships. Niki mastered them all.

So, who do you pick? The driver with the most impressive stats of any currently racing – or the man he frequently turned to for advice and guidance? 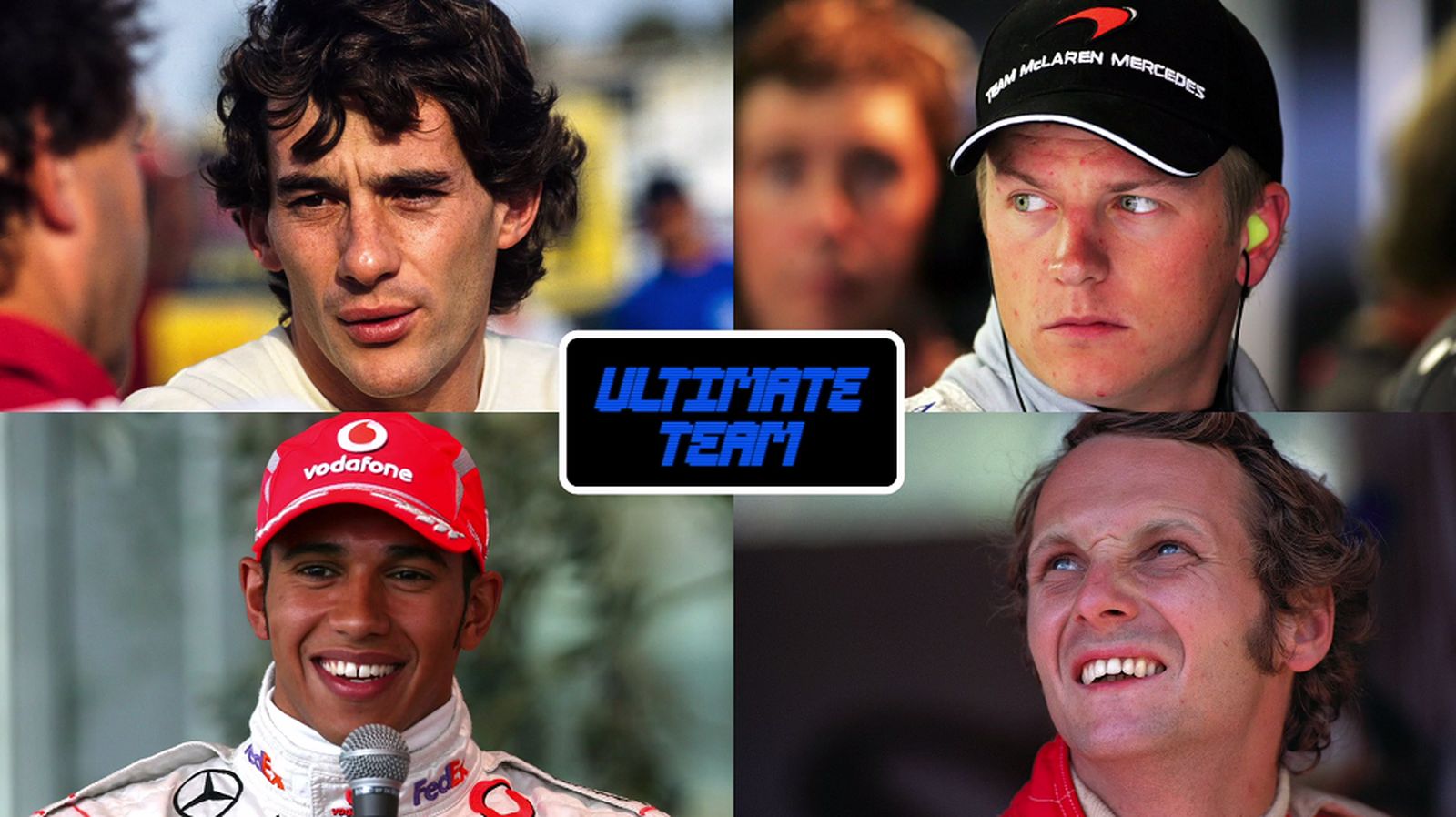 More than a quarter of a century after his untimely death, the superstar status of Ayrton Senna remains a powerful force within the F1 paddock. The Brazilian’s three drivers’ titles with McLaren and his 41 F1 victories barely begin to tell the story.

Senna had all the natural gifts: his mesmerising car control on track was matched by charisma off it. He was in the vanguard of a new breed of driver who took nutrition and fitness seriously, and combined them with mechanical empathy and an uncanny ability to recall set-up options from years before. For many fans, Senna will always be the ultimate driver… but he’s going up against a formidable foe.

Kimi Räikkönen has spent two decades at the top of F1. Later this year, the 2007 drivers’ champion is expected to take the record for the most grand prix starts of any driver. His 21 victories span 16 seasons, making him the only racer to have won grands prix in the V10, V8 and V6 Hybrid eras.

Kimi is a throwback to an earlier age: prepared to turn his hand to any form of motorsport. His most serious diversion was two years in WRC, where he did not look out of place among the best rally drivers in the world – but he’s equally happy to race a snowmobile or a powerboat: the former under the pseudonym ‘James Hunt’, the latter dressed as a gorilla. He’s relaxed enough to called F1 a ‘hobby’ – but a generation of race engineers can attest that it’s a hobby he takes incredibly seriously, with more exacting set-up demands than any other driver.

Polls open for 24 hours only on 21 May, so keep an eye out on our Twitter, Instagram and the McLaren App for your chance to vote.