Welcome to my blog where I hope to share the best experience of my life having attended the Monaco Grand Prix! The opportunity to be the Fan Blogger for Team McLaren added to my excitement as I have loved watching Formula 1 since being a young teen in 2004.

I'm Deejay, known on Twitter as @DJSinghx and I have felt passionate about Formula 1 since first coming across it on TV where I was immediately attracted to the McLaren Mercedes MP4-19B. It naturally made me support the team and Kimi Raikkonen as a driver. Testing at Silverstone in 2005 was the first time I had seen the Formula 1 cars live and my first and only Grand Prix attended prior to Monaco was the British Grand Prix in 2008.

Exiting the station I found myself at Sainte Devote. I couldn't have ended up at a better point to start my track walk! It's true that watching on TV doesn't really give you a realistic perspective at times and I immediately realised this with the steepness of the run up the hill towards Casino Square which was more than I expected! I always wondered if the bump before Mirabeau really required the drivers to avoid it so drastically and finally I could visualise how a Formula 1 car would become unsettled going over it which cleared that question up! Fairmont hairpin was a nice corner to sit at and seemed quite popular which is no surprise considering it being the slowest corner in Formula 1. 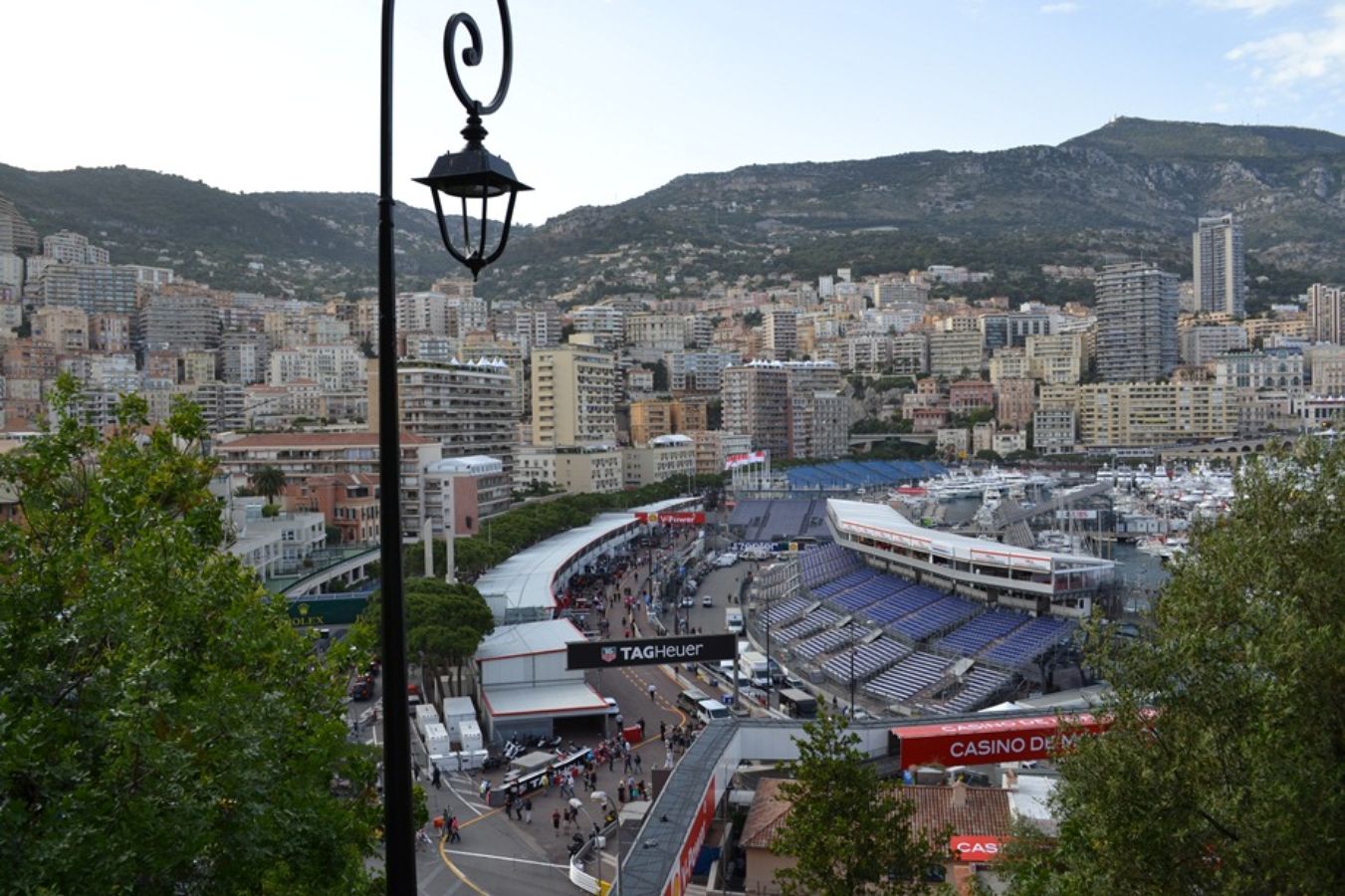 I needed to make my way towards Casino Square where I would watch Free Practice and the circuit organisers pointed me in the right direction with the words "it’s a long way around". I found myself climbing lots of stairs to a view I was slightly scared of looking down from but I finally I made it to the road at the top and could make my way easily to the grandstand. 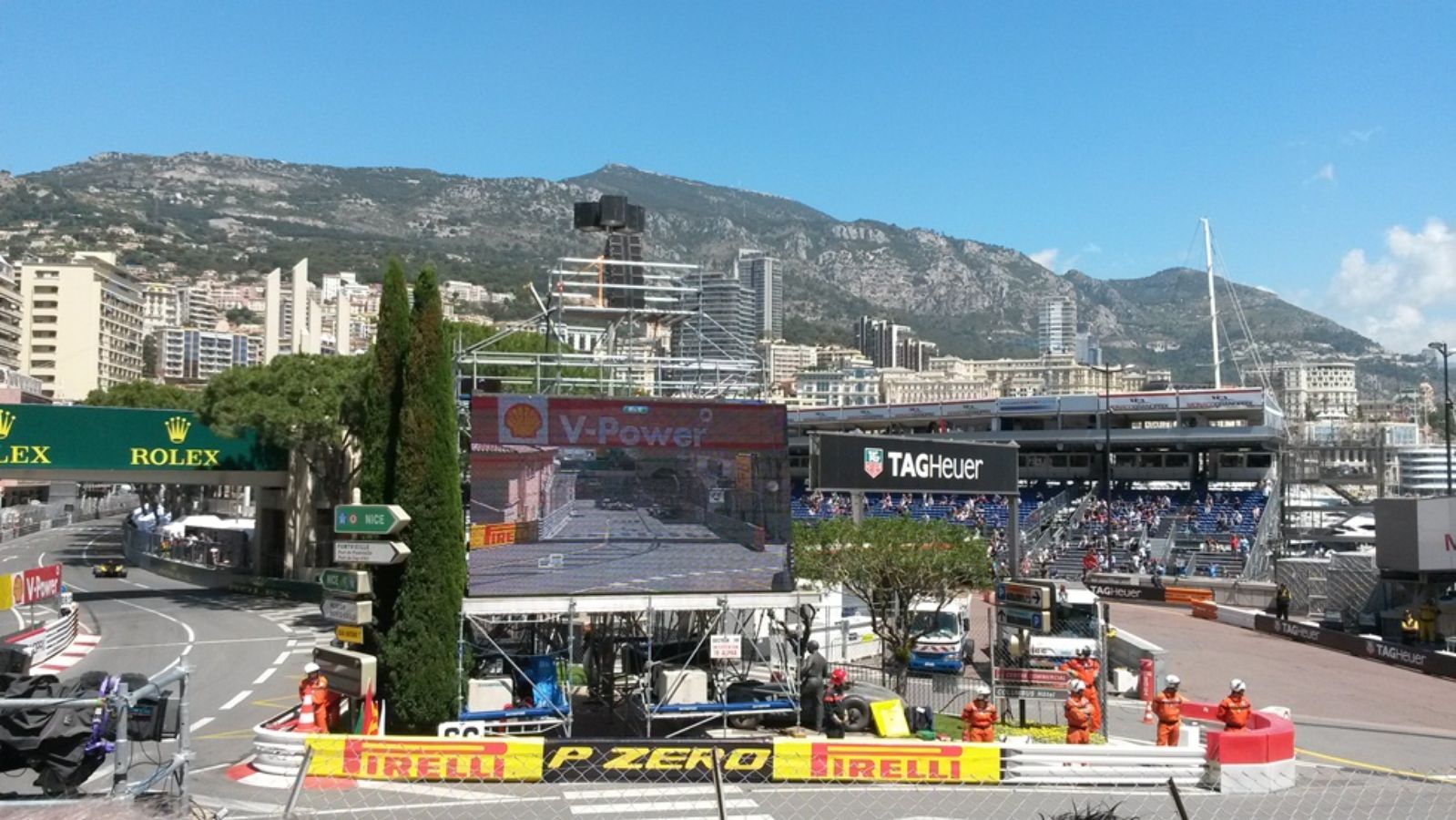 Watching the drivers through Casino Square was impressive. As soon as the session started, lots of drivers were on track. It was interesting to see the different lines taken through the corners and how some hug the left hand barrier for longer with an aggressive turn right whilst others prefer a smoother blend for a change of direction. It was also great to watch the GP2 drivers in their practice session after and I was cheering for McLaren’s reserve driver Stoffel Vandoorne!

Just before FP2, we had hailstones which I was most definitely not expecting in Monaco! It was quite painful but I was happily distracted laughing at a few guys in front of me shouting "ouch" every time they were hit! I wasn't sure where they were from but at least I had experience of this weather living in England!

FP2 started with damp track which allowed us to see the cars on intermediate tyres. To my eyes, the McLaren drivers looked strong through Casino Square in these conditions and both drivers were pushing hard! I had noticed the rear step out at times which was entertaining to watch as a fan! 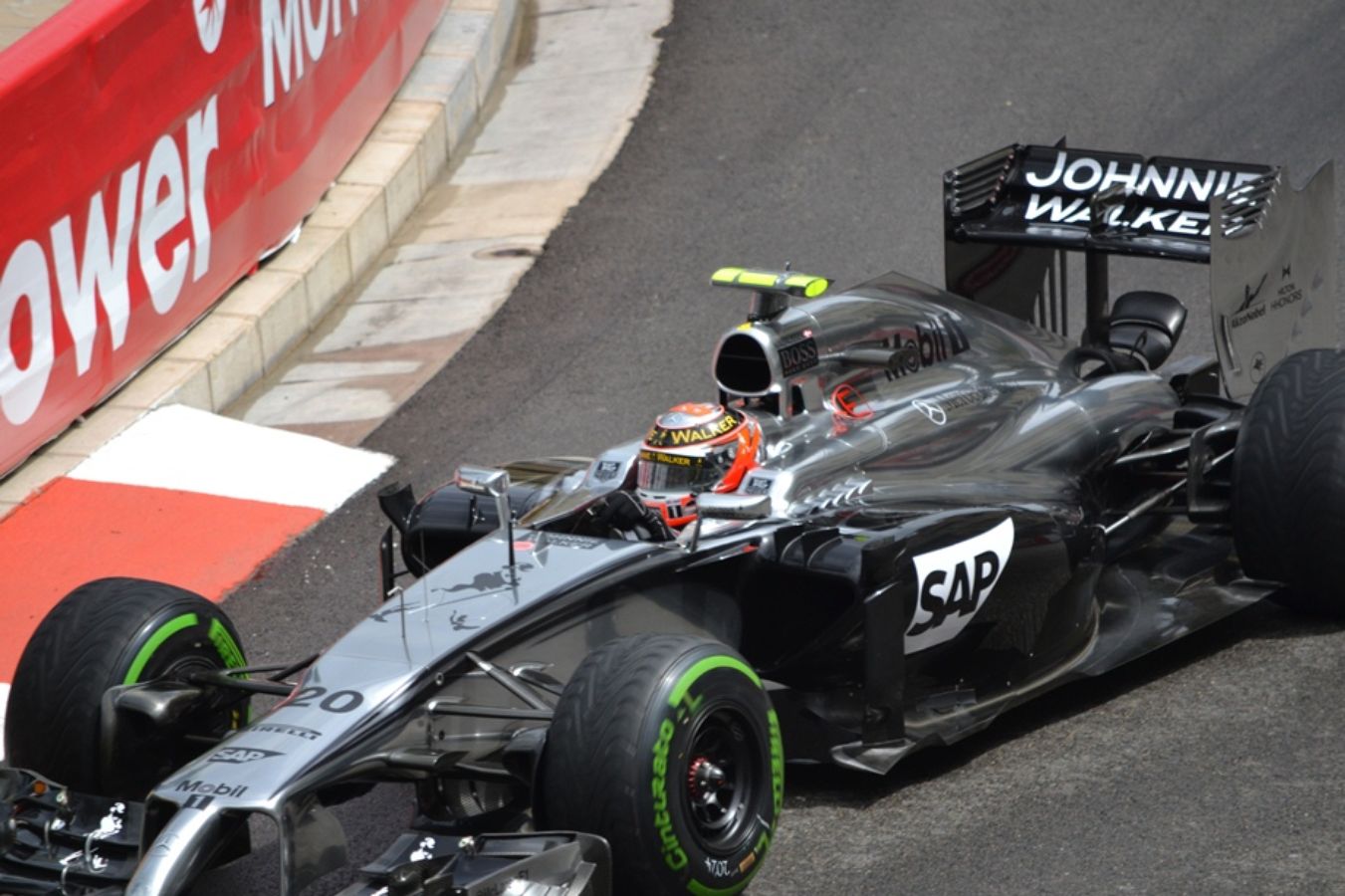 Later I decided to head to the famous Stars N Bars restaurant as I had ordered a ticket to allow me access on Thursday. After a few cocktails I enjoyed a meal whilst admiring items on the wall such as race suits given to the restaurant from sporting legends from various sports. There is also the shell of Mika Hakkinen's MP4-15 fixed to a wall which was very impressive!

The GP2 race was thrilling with overtaking and unfortunately a crash occurring into Anthony Noghes! As a fan of Vandoorne, it was lovely to see him leading for a while!

Straight after GP2, I queued at a gate for the pit lane visit. As soon as I was allowed in, I stood directly in front of the McLaren garage awaiting Jenson Button and Kevin Magnussen. Team McLaren were nice enough to inform me that they would appear around 3pm so it meant waiting for an hour but I knew it would be worth it! 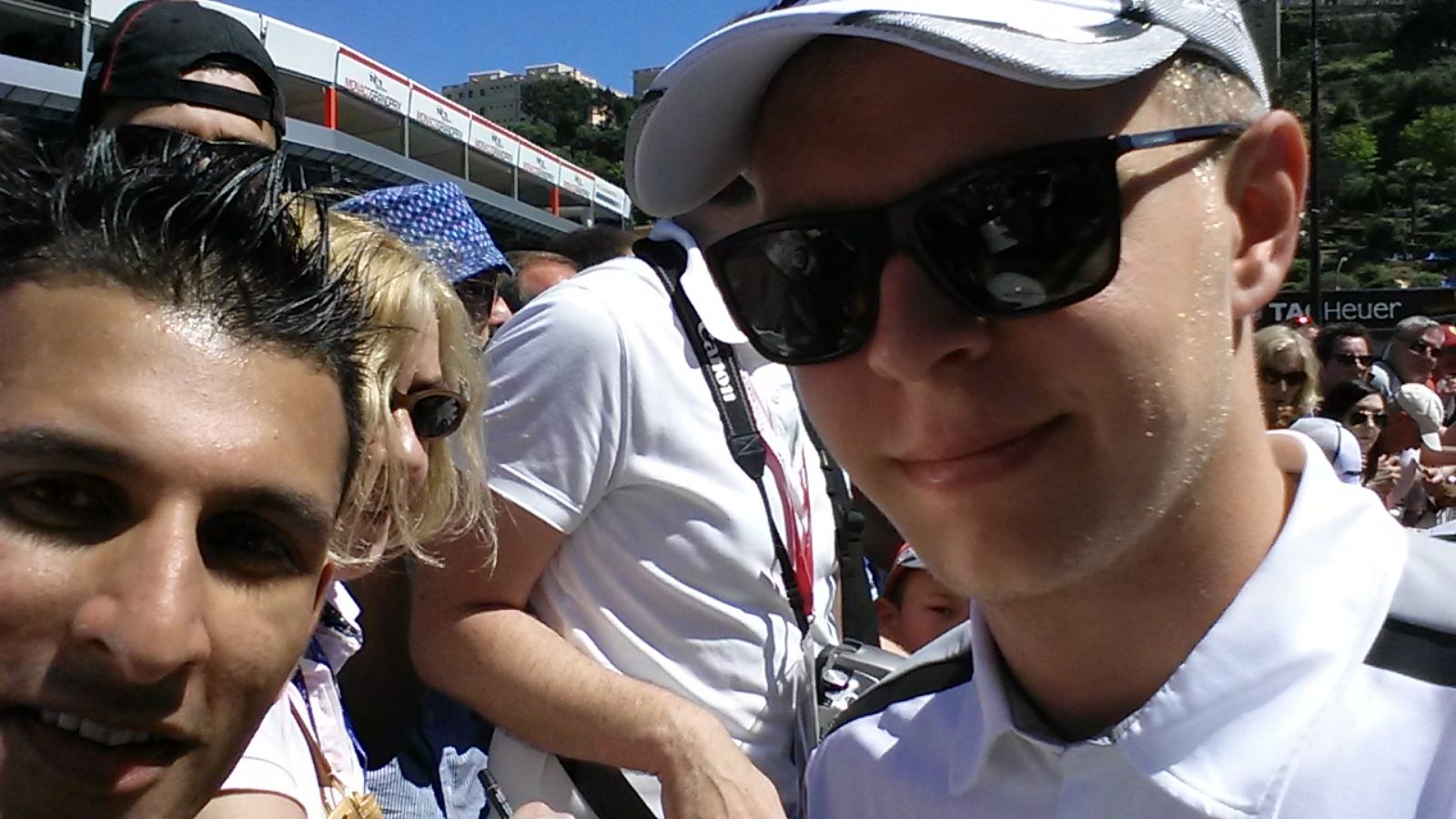 Both drivers were kind enough to autograph my diecast helmet and allowed me take a selfie with them! Admittedly, the pictures didn't come out as good as I would have liked but before this weekend I had never taken any which caught me out! I was also panicking slightly being in the presence of them! 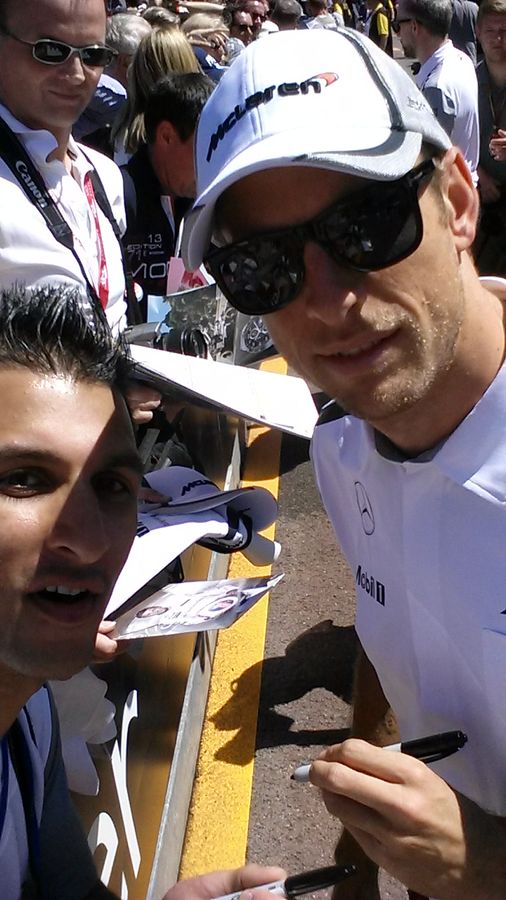 Later I would find other drivers before spending time watching McLaren practicing pit stops before moving onto other teams to take pictures and assess their pit stop skills! McLaren definitely have a nice procedure but I understand how under race conditions it can be slightly more hectic!

It was a gorgeous day and I made my way to the grandstand on the harbour opposite the swimming pool section where I would watch FP3 and Qualifying from. I'd always wanted to watch from here after seeing the cars tackle this section on TV. For me, it is one of the best corners alongside Eau Rouge at Spa and Copse at Silverstone. You could see the drivers being challenged with the fast change of direction and those taking too much speed would have to deal with the rear stepping out a little! 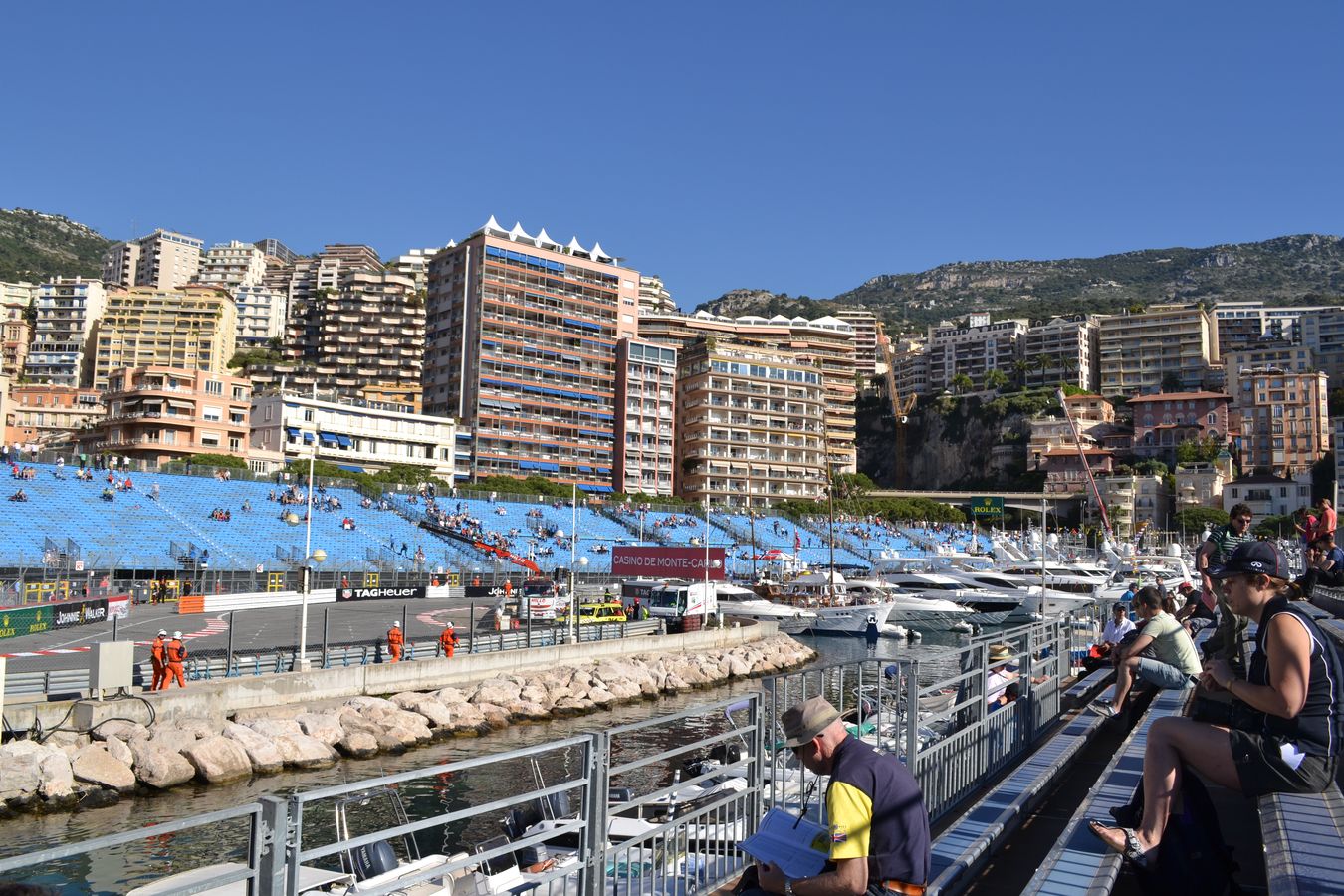 On Sunday I arrived fresh and ready for the Monaco Grand Prix. I had a wonderful position opposite the pits and more specifically, opposite the McLaren team. The view down onto the circuit was great with the cars being very close. The morning started off with the Formula Renault race which got me straight into the mood where I always become nervous yet excited! 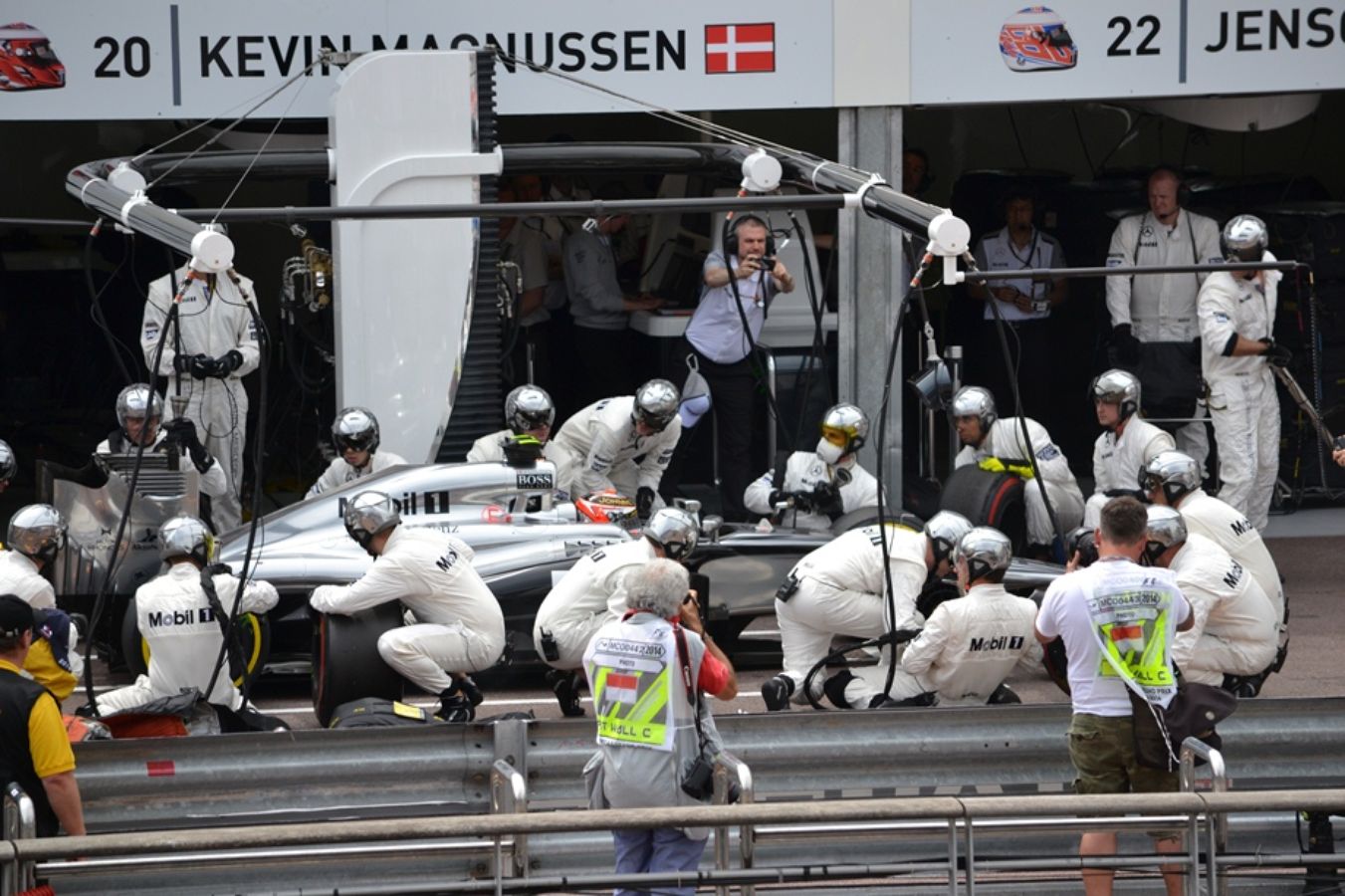 It was then time for Formula 1. The drivers came round on the parade lap and I couldn't help but wave frantically at them! Watching the race was exciting and seeing the teams at work during pit stops was perfect! I could not have chosen a better place to watch the race from. I also had a screen directly in front of me so I could keep track of what was going on elsewhere on circuit! There was a great diversity of race fans sitting in the stand so the atmosphere was electric all the way through. Jenson and Kevin battled hard and fought well to bring their cars home with points in P6 and P10 respectively. 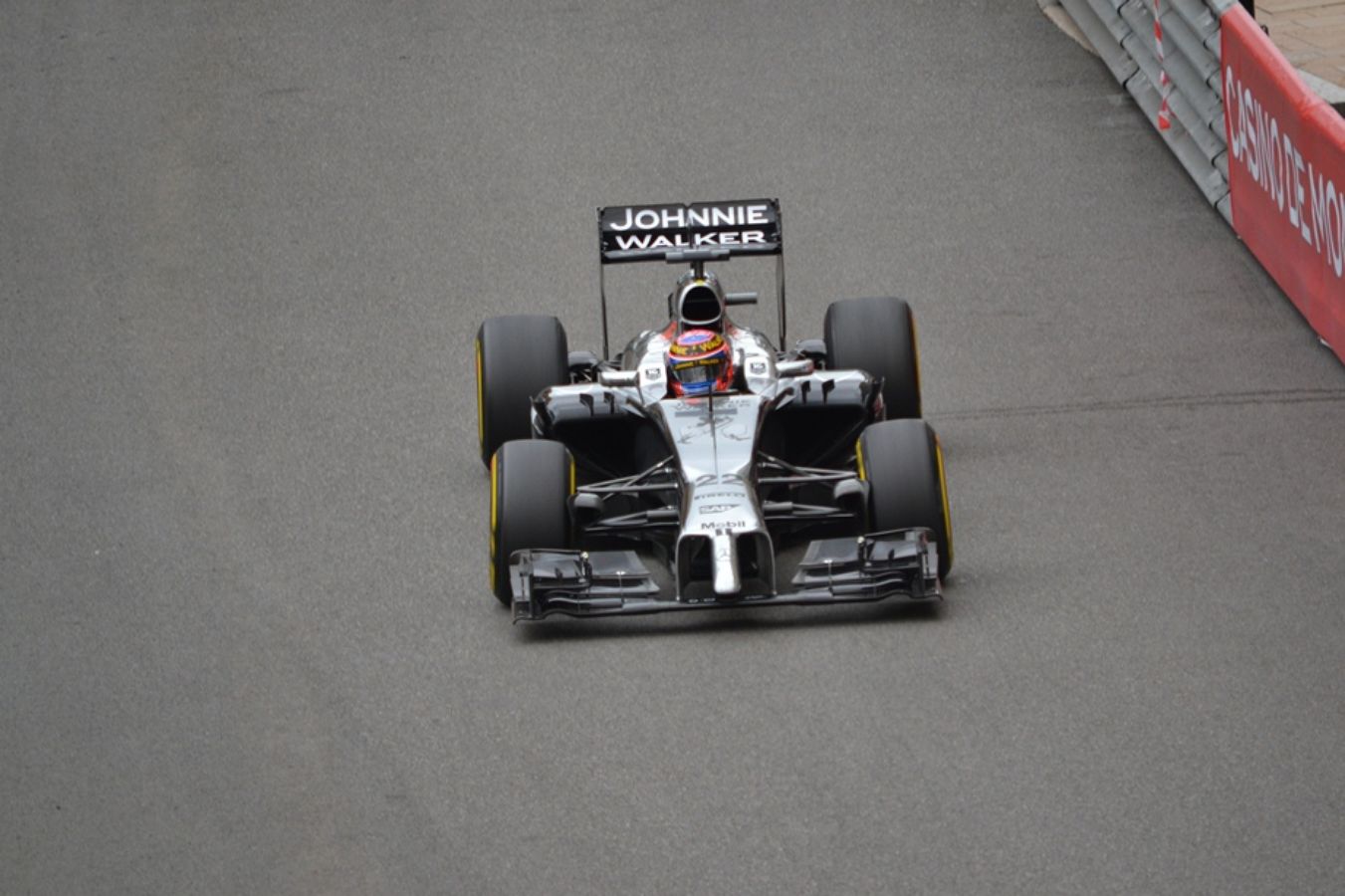 Overall, it was the perfect Grand Prix weekend. Monaco surpassed all my expectations and I couldn't have asked for anything more from my first race abroad! It has been a dream for years to watch this race live so additional moments like meeting the McLaren drivers just made the experience ever sweeter!

The Top Things to do as an F1 Fan Monaco

1. Track walk - You can walk majorly on the road itself during traffic hours for the real experience.

2. Architecture - Admire the buildings on or around the track corners like the Monte Carlo Casino and Hotel de Paris.

3. Rocher - Make the walk up and enjoy the view overlooking the circuit.

4. Drink at La Rascasse - You hear about the mess on the floor during the evening. Witness it yourself!

5. Pit Walk - Visit the pits on the Friday to see drivers, get autographs and watch the teams work on the cars and practice pit stops!

6. Paddock Exit - Stand and wait for drivers for quick pictures. Be prepared for pushing and shoving!

7. Stars 'N' Bars - Eat and drink at the restaurant many stars have attended.

8. Shop - There are many F1 stalls and shops. Head to the ACM shop and buy yourself an item of clothing in association with the Grand Prix you are attending.

I hope you enjoyed reading this blog as much as I enjoyed writing it!

10 Facts You Didn't Know About The MTC 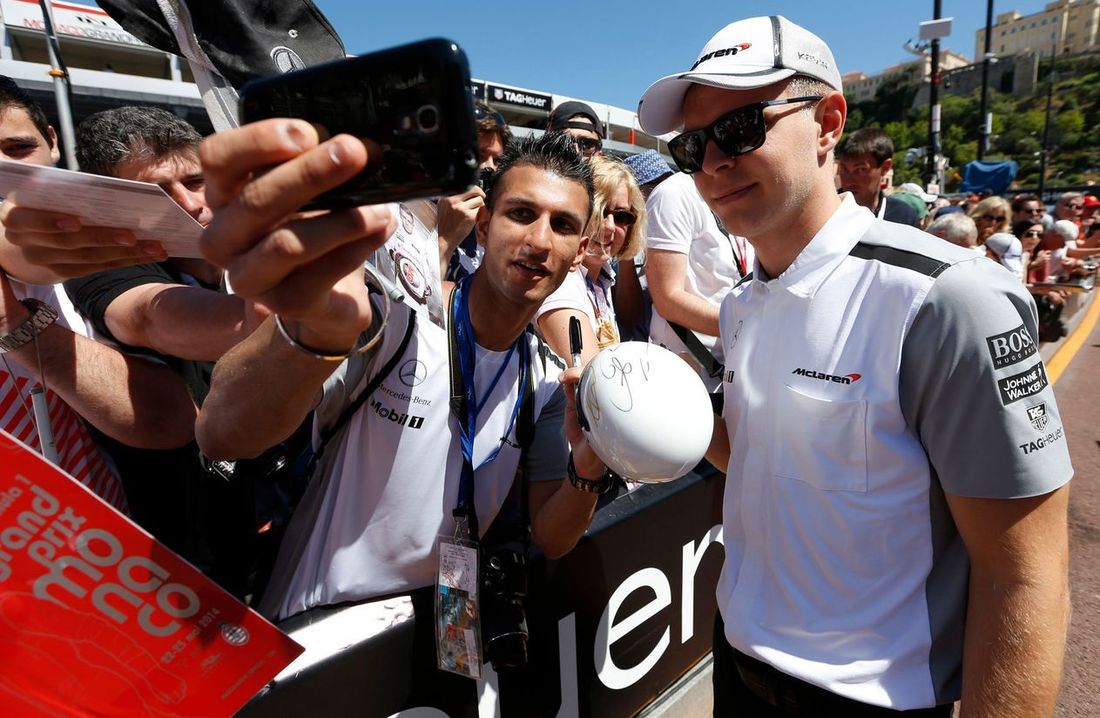