Nicolas Hunziker is a 4th generation fine artist. Unlike the rest of his family however, he only paints cars...fast cars! His evocative painting style together with his passion for Formula 1 makes his partnership with McLaren an obvious one. Kicking off with a colourful 2014 Calendar, we will be releasing a product range featuring eye catching Hunziker designs at https://www.McLarenStore.com and wanted to give McLaren fans an insight into Hunziker himself.

Where did your love of Formula 1 start?

I guess it's a bit in my blood; my granduncle (Prince Bira) contested the first four Formula 1 seasons from 1950 to 1954. There's just something about the no-compromise approach of a single-seater race car that I find very appealing. Cars were born from horse carriages and intended as a transportation tool, a Formula 1 car is completely useless for this purpose. It's designed to do one thing: Get one driver around a track as quickly as possible.

When did you start incorporating the sport into your artwork?

I've only ever painted racing cars, nothing else really interested me as a subject matter. I'm a fourth-generation fine artist but the first one in my family to solely concentrate on racing cars. Even when I was kid I was always doodling cars, all my school books were full of cars. Taking my family history into account I think it was inevitable that I would end up racing and painting racing cars.

Your paintings are reminiscent of Andy Warhol’s pop art style. Bright colours and dynamic images. Where has your style come from and do you make a conscious effort to produce commercial paintings and images over purely artistic indulgence?

The Warhol comparison pops up often but I don't really see it myself. I think art deco advertising posters from the 1930s have had a bigger influence on my artwork. In 1932 my grandfather, Gerold Hunziker, painted one of the most famous Bugatti posters. It's been replicated thousands of times and it is still available for sale today. I have the original draft hanging in my studio: The bold use of colour and the dynamic style have been a great source of inspiration to me.

Obviously, as a commercial fine artist I have to paint images that people want to buy. If it were just up to me I would probably paint Jo Siffert in every other painting or do obscure Formula 1 stuff from the 60s and 70s but I have to be mindful of the commercial aspect. I've had tons of requests to do 'American Metal' but I find it difficult to paint something I don't know much about. For this reason I haven't really ventured into that area. Luckily subject matters such as McLaren, Formula 1, Gulf Racing, Le Mans, Porsche etc. are near and dear to my heart.

Actually it's been fantastic. I use the word 'actually' only because I've worked with large companies before and it hasn't always been easy. Perhaps it's also because McLaren comes from the culture of Formula 1 where you have to react and act quickly. We have accomplished quite a lot in a short time frame and I'm very much looking forward to fruitful collaboration in the future.  Another thing that I noticed was the complete professionalism at every step of the entire organization, even though I have not met Ron Dennis, you can tell that he runs a tight ship. It's also been fun to get an insight into the company, I got to check out the McLaren P1 and got a little tour from the P1 Programme Director.

What approach did you take when creating the new McLaren Hunziker range?

It has really been a collaboration between McLaren and Hunziker. Initially we had discussions about which subject matters were of importance to the history of McLaren. Some of them came from McLaren, some of them came from me. At 50 years, McLaren has a remarkably rich history: Multiple Formula 1 Championships, revolutionized Formula 1 technology in 1980s which is still relevant today, won the Indy 500, dominated Can-Am and on and on it goes. Picking the subject matters hasn't been easy!

As an artist, the colours were of great importance to me as well. Luckily McLaren Papaya, McLaren Rocket Red and McLaren Pewter have given me a great colour palette to work with.

In the video (at the bottom of the page) you paint extremely fast and without any mistakes...was this all one take?

The film is 'one take' in terms of not being able to go back and fix mistakes. There's no time lapse or stop motion. We just film it as I paint. We stop the camera to let the paint dry but everything you see in the final film was actually captured in camera. So if I make a mistake I have to start all over again. Sometimes I get it right in one take, sometimes it takes a couple more. Afterwards the film is sped up. You could actually slow down the film and watch me paint everything in real time. If you did that the film would be about 25 minutes long and quite boring. 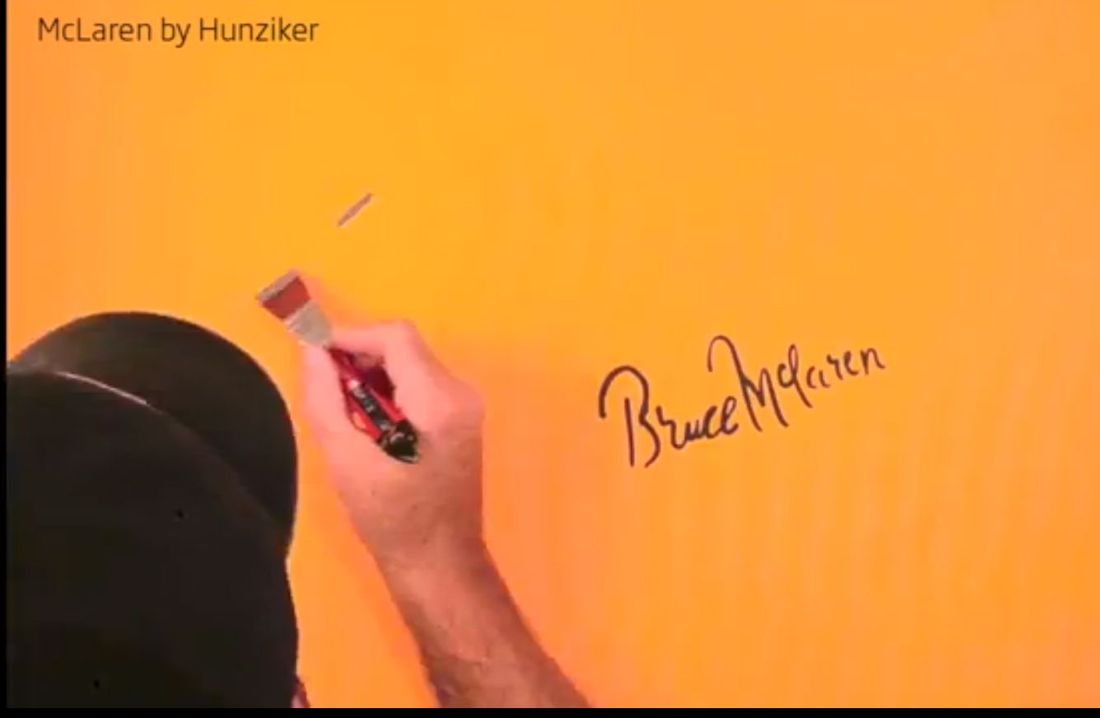