The very first Japanese Grand Prix in 1976 was a significant moment in our history. After a tense and eventful season, James Hunt went into this 16th and final round of the championship just three points behind Ferrari’s Niki Lauda, who was recovering from injuries sustained in an accident at the Nürburgring.

Simply getting to Fuji Speedway was an adventure in itself. Many people had to fly via a complex route that involved Copenhagen and Anchorage, and that was just to get to Tokyo. From there it was another substantial trek into the countryside to arrive at the circuit, which clings to the side of the foothills surrounding the iconic Mount Fuji.

With so much at stake, we prepared for the race carefully. Immediately after the previous round at Watkins Glen, which James won, we shipped one of our M23s to Fuji Speedway for him to test. But the track conditions, as we were to discover, proved changeable. Practice for the grand prix took place amid a flurry of increasingly pessimistic weather reports, and although Mario Andretti ultimately prevailed over James in the battle for pole, with Lauda third, there was some doubt as to whether we would race at all. The dreaded weather front moved in on Saturday night and on Sunday morning the mist was almost impenetrable.

The scheduled start time of 1.30pm came and went with few signs that the rain would abate. When we were finally called to the grid just before 3pm we had to put planks of wood down so that James could walk to his car without getting his feet soaking wet. He said that he didn’t want to race.

But he did. Off the start he took an immediate lead, enjoying (relatively) clear visibility while those behind could see little but spray. After two laps Lauda brought his car into the pits and got out, declaring the conditions too dangerous to continue.

This most unpredictable of grands prix took a new turn when the rain suddenly stopped, the track dried, and the remaining drivers had to contend with managing the degradation of their wet-weather tyres on the rapidly drying surface. Nursing a slowly deflating left-rear tyre, James fell back to third place. Fourth would still be enough to seal the drivers’ title, but it was getting close – and then, with five laps to go, his front-left tyre burst.

Luckily, it did so just before the pit entrance. James emerged in fifth place and literally charged through the final laps, making what proved to be crucial passes of Alan Jones and Clay Regazzoni. He crossed the line in third place, though he had no idea which position he was in. Only after getting official confirmation from the timekeepers could he dare to believe that he had become the World Champion!

Suzuka became the new home of the Japanese Grand Prix in 1987. Alain Prost qualified his MP4/3 on pole but a puncture robbed him of a possible victory; Stefan Johannson was on course for second place in the other MP4/3 but he had to turn down the turbo boost to save fuel in the final laps, losing out to our future star Ayrton Senna, then driving a Lotus.

On this classic driver’s circuit Ayrton quickly established himself as a fan favourite.

In 1988 the Japanese Grand Prix was the penultimate race of the season and, having won all but one of the races so far, Alain and Ayrton were the only ones in contention for the championship. But which of them would lift the ultimate prize?

Ayrton qualified on pole position but when the lights turned green he stalled the car. Alain stormed forward into the lead as the first few rows swerved around Ayrton’s MP4/4, which gently rolled down the slope… capitalising on this precious piece of momentum, Ayrton lifted the clutch and the engine caught. He was on the move again, albeit in 14th place.

What followed was mesmerising. Ayrton claimed back six of those positions before the race was even two laps old. By the fourth lap there were only three drivers ahead of him: Gerhard Berger, Ivan Capelli and Alain, who was beginning to struggle with a gearbox issue. To add further spice to the proceedings it began to rain intermittently and Ayrton revelled in the conditions, easily passing Berger and then reeling in Alain after Capelli went out with an electrical failure.

Ayrton’s opportunity to snatch the lead came at half distance, when Alain was blocked while lapping Andrea de Cesaris. Having moved ahead he reeled off a succession of fast laps, breaking the lap record, before the rain started to fall in earnest. Not only would this great victory prove crucial in the battle for the World Championship, it took Ayrton past the previous record of wins in a single season, jointly held by Alain and the late Jim Clark.

In 1989 the rivalry between Alain and Ayrton boiled over at the Japanese Grand Prix and their cars interlocked as Ayrton tried to overtake at the chicane with seven laps to go. Alain climbed out of his car, believing the World Championship to be settled and their race over, but Ayrton stayed at the wheel of his own MP4/5 and bump-started it as the marshals pushed the cars away. In doing so he short-cut the chicane, which would ultimately prove his undoing.

Ayrton needed to pit for a new front wing, which cost him the lead, but after leaving the pits he chased down new leader Alessandro Nannini, passing him three laps from the chequered flag. It was a spectacular piece of driving, but Ayrton was then disqualified for short-cutting the chicane. Alain may not have finished the race but he was now far enough ahead in the points to be crowned World Champion.

Ayrton was the favourite to win the World Championship in 1991 but the battle was still not over as the F1 circus arrived at Suzuka. Ayrton qualified on pole, with his rival Nigel Mansell in second. At the start, though, it was the other McLaren that took the lead. Gerhard Berger had dutifully backed up Ayrton’s title challenge and this was his day to shine.

The pressure was relieved when Mansell crashed out. Ayrton took the lead and then Gerhard dropped back with a misfire, but the McLaren drivers had agreed before the start that whichever of them led the opening laps should win the race. With the World Championship secure, Ayrton backed off at the last corner and let Gerhard through to a richly deserved victory.

The World Championship had already been decided in 1993 but this removed none of the drama from yet another Prost-Senna battle. Alain, now driving for Williams, had claimed his final title and announced his retirement from racing. Ayrton was competing in his last Japanese Grand Prix for McLaren. Both of them drove this race is if the World Championship was still hanging in the balance.

The rain started during the first round of pitstops but at first it wasn’t wet enough to warrant fitting wet-weather tyres. Running slick tyres on a wet and greasy surface, Ayrton was in his element, chasing Alain down for the lead. The rain intensified and finally the leaders called in for wet tyres. Ayrton emerged first thanks to the quick hands of the McLaren pit crew.

Ayrton and Alain continued to dispute the lead as the rain eased off and the track dried out. It was still hazardous – indeed, some of the hazards were moving, as Ayrton discovered when they came up to lap Eddie Irvine – but the old rivals stayed on track to the end. Ayrton led Alain home, followed by Mika Hakkinen, finishing third in only his second race for McLaren.

Like Ayrton, Mika relished the challenge of Suzuka. In 1995, the first year of our technical partnership with Mercedes, he finished second even though he was still recovering from appendicitis. But it was not until 1998 that he climbed the top step of the podium. With the World Championship depending on the outcome once again, Mika qualified second to Michael Schumacher – but when Schumacher stalled on the grid and had to restart from the back, the pressure was relieved. Schumacher’s team-mate Eddie Irvine had no answer to Mika’s pace and our ‘Fast Finn’ duly delivered our tenth drivers’ title.

A year later Suzuka once again hosted the last race of the season, with Mika arriving four points behind Irvine. But this would be a race between Mika and Michael Schumacher, now back to full strength after breaking his leg earlier in the year. Again Schumacher took pole, pushing Mika into second, but Irvine was fifth and lagging on pace. Mika took the lead at the start and was untouchable for the rest of the afternoon, finishing five seconds ahead of Schumacher and over a minute and a half ahead of Irvine to clinch his second World Championship.

Like Mika, Kimi Raikkonen took several podium finishes for McLaren at Suzuka before notching up his first win there. The 2005 Japanese Grand Prix was an utterly remarkable affair: rain during qualifying left both our drivers well down the field. Kimi started 17th and survived a brief contact with team-mate Juan Pablo Montoya as they tried to avoid the aftermath of a collision between two other cars. He was clearly the quickest driver in the field, picking off his opposition one by one, and finally taking the lead with a stylish pass around the outside of Giancarlo Fisichella into Turn One.

“When I came up behind Fisichella I was thinking which way I should go,” said Kimi. “Of course on the inside it is easier to overtake, but Fisichella went to the inside. So I didn't have much choice but to go round the outside.”

For 2007 the race returned to the redeveloped Fuji Speedway. But while the track had been modernised, the weather was a throwback to 1976. The race started behind the Safety Car – in fact, the Safety Car pilot Bernd Maylander would lead more laps than any other driver in this grand prix – and it reached its scheduled total of 67 laps on the stroke of the two-hour cut-off. Strategy took a back seat to luck and skill. This race was all about survival.

This might have been Lewis Hamilton’s first year in Formula 1 but he drove like a veteran, mastering the slippery track. He was tapped into a spin by Robert Kubica but continued, feeling a vibration in the car but putting it to the back of his mind and concentrating on making it to the finish. This, Lewis’s fourth F1 win, would be the first of many virtuoso displays in perilously wet races where the track conditions vary wildly from one lap to the next. 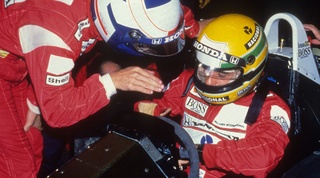