The one man in Formula 1 who knew Ayrton Senna best of all was McLaren CEO Ron Dennis.

Ron signed Ayrton to McLaren in the summer of 1987, and worked closely with him until Senna left the team at the end of 1993.

Together, they racked up three drivers’ championships and 35 grand prix wins. In fact, Ayrton won more than one in three of his races for McLaren, having driven for the team in 96 grands prix.

Ron last spoke candidly about his relationship with Ayrton more than 10 years ago – on the 10th anniversary of Senna’s death; now, he breaks his silence once again in order to commemorate the 20th anniversary of the great Brazilian’s passing. 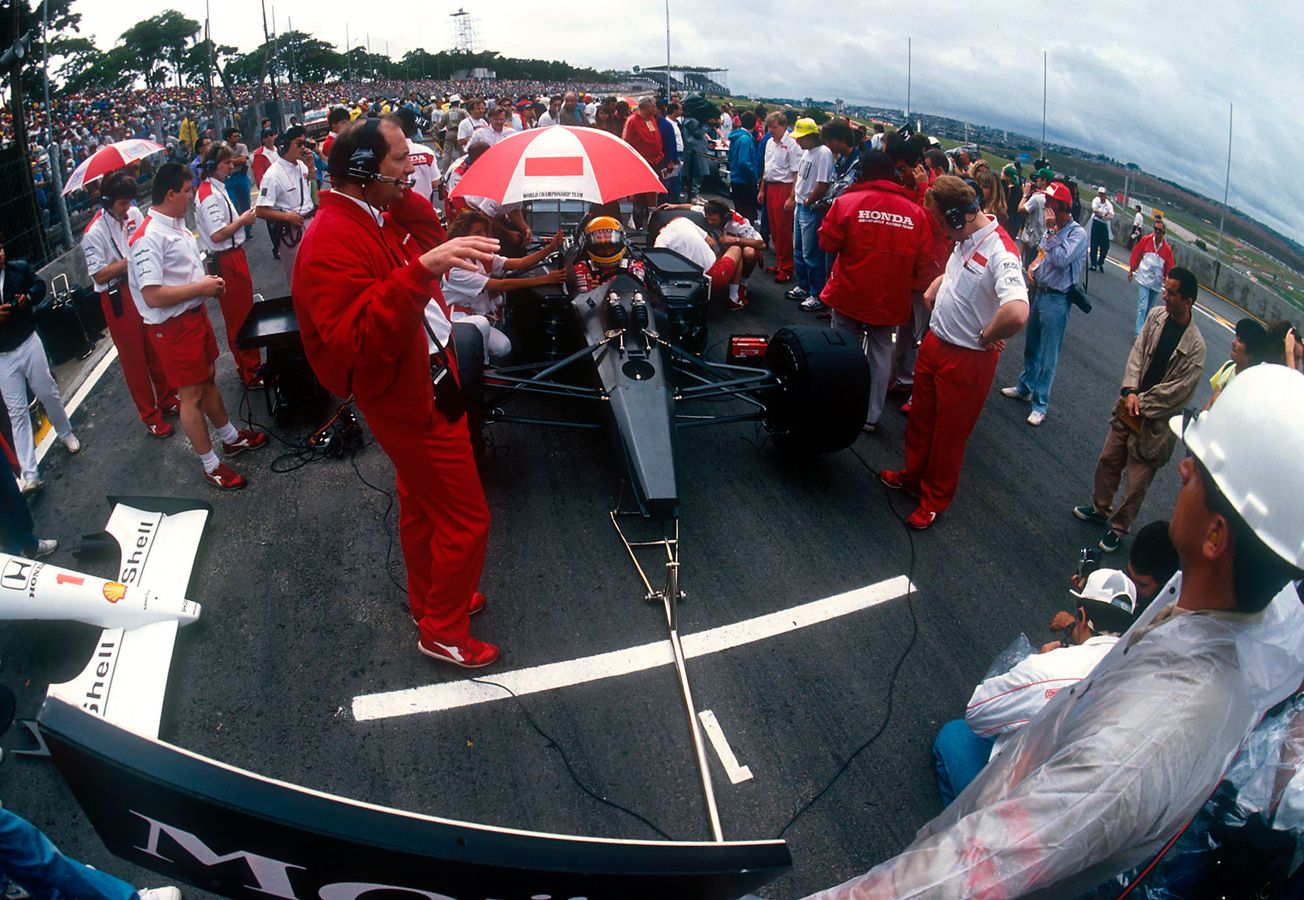 Ron, tell us how you first came to sign Ayrton to McLaren?

"Ayrton put out feelers, he saw the team was competitive. He made it very apparent that he wanted to join the team. It was very clear to us; he was in his third season with Lotus and the Honda engine was becoming more and more attractive – they clearly had domination on their mind.

"He said he wanted to meet. He was living in a rented house in Esher at the time, not far from where we were in Woking, so nearly all the meetings took place at his home.

"As the contractual negotiations neared their conclusion, we started to headbutt on the numbers. There was no way he wasn’t going to drive the car and there was no way we weren’t going to contract him to us – but we could not agree about the money.

"We were arguing over half a million dollars, and I came up with the idea of us flicking a coin to decide. But Ayrton’s English wasn’t so good at the time – so there was a five-minute conversation about the details. I had to draw pictures on a piece of paper. I just wanted to find a way forward.

"So the coin was thrown into the air, spinning. It landed and it went off like a rocket! You could hear it rattling under the curtains, I pulled them back and I won the bet!

"At the time, neither of us twigged that we’d tossed a coin over a three-year contract – so the net result was for $1.5m. That’s often been depicted as a total disrespect for money – it was nothing of the sort, it was the only way to break the log-jam."

What are your memories of that fantastic 1988 season when McLaren won 15 out of 16 races?

"The car was late, very late. It was so late, that, when I was told: ‘Look, we are going to miss the final Imola test,’ I took my jacket off, went downstairs, put a white coat on and told everyone: ‘This car is definitely going to Imola!’

"And within a few hours of me taking control, two or three of the senior guys came along and said they’d got the message! But we were so late, and I think everybody else had been pounding around for two or three days. We had the car ready for the final day’s testing.

"I can’t remember who drove the car first, I think it was Alain – on his third flying lap, he was something like 1.5 seconds quicker than the competition. It was one of those surreal moments – almost like a movie going into slow-motion – everybody was looking at each other and asking themselves how this could be." 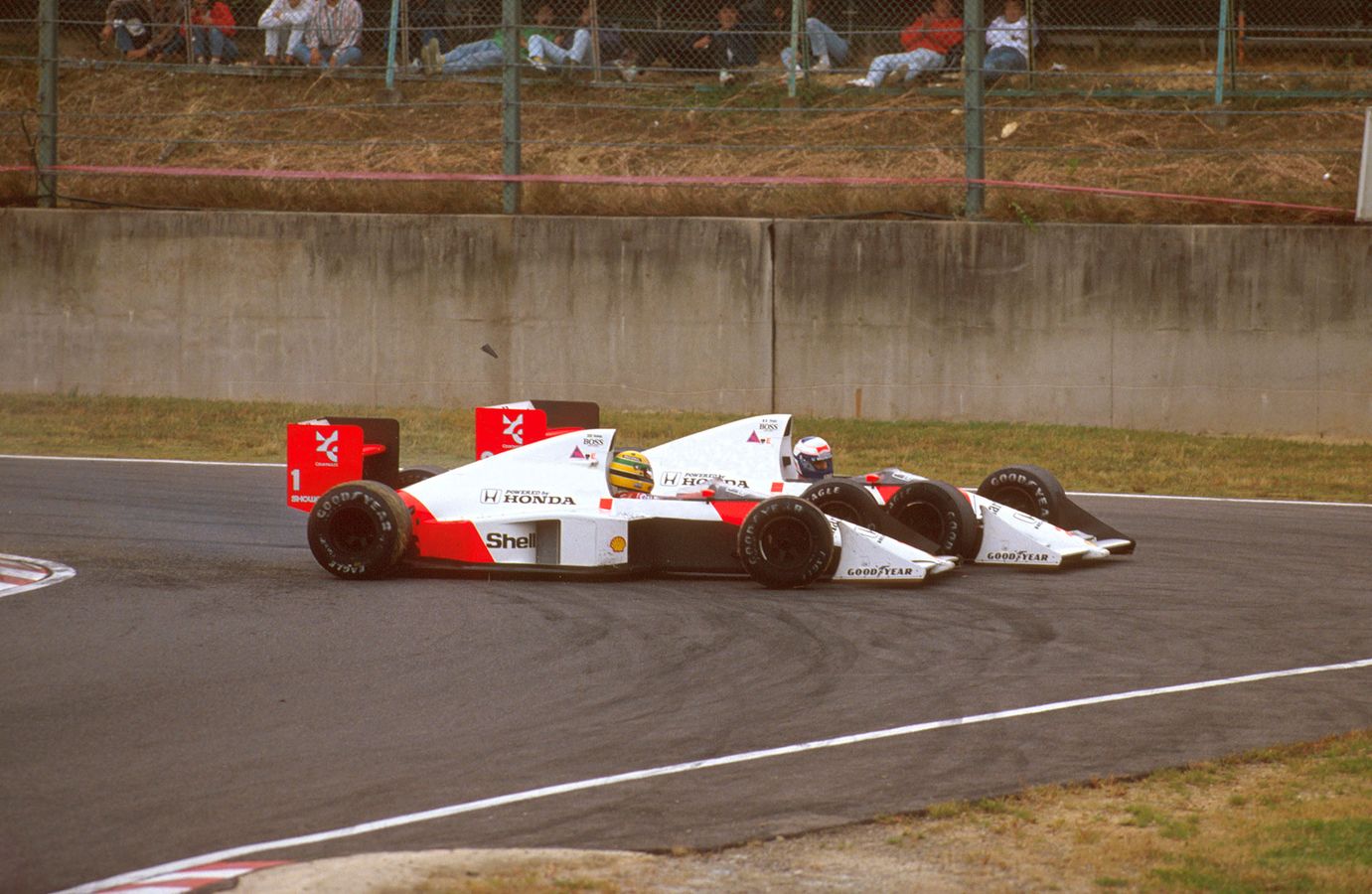 What do you remember about Ayrton’s performance at Monaco in 1988?

"His crash at Portier was the result of a lapse of concentration. We were trying to slow him down but, when you back off in a racing car, you lose concentration; so there was just a lapse, nothing else. He was so angry – he didn’t come back to the pits, he walked away from the circuit and sat in his flat. He didn’t reappear until later that evening, and was massively angry with himself…" 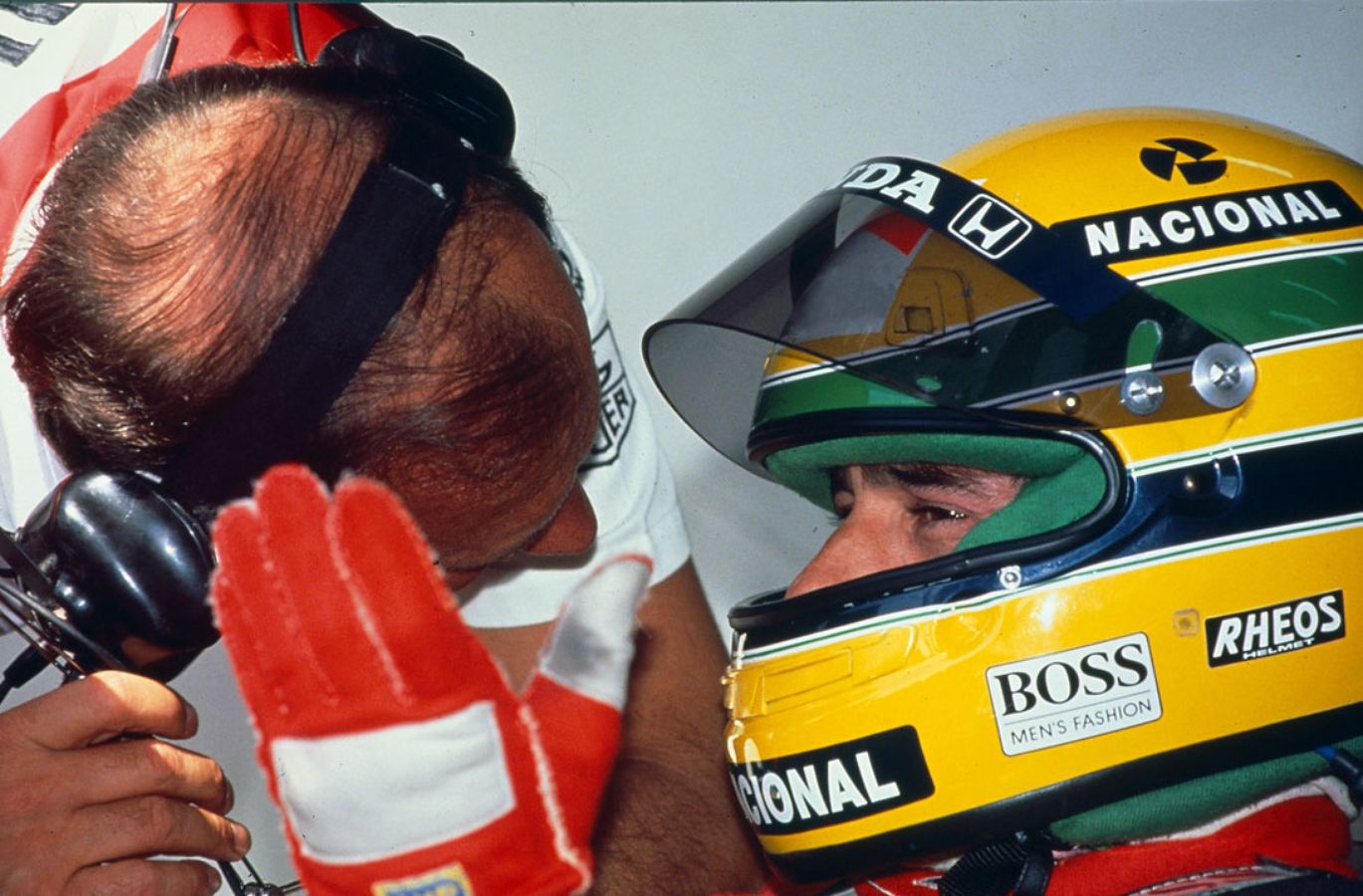 What happened at Imola in 1989, when Alain accused Ayrton of breaking a pre-race agreement?

"They broke each other’s confidence. They were both to blame. They both made commitments to each other several times, that was one that came into the public domain. There was tremendous tension and anger.

"Afterwards, they were testing down at a circuit in Wales, called Pembrey. I flew down there in a helicopter and sat them down in a little combi bus at the side of the track. Now, I am no pussy cat, and my psychology was that I needed them to see me as the bad guy. I felt that if they could be hostile towards me, then they wouldn’t be hostile to each other.

"It was a delicate thing, and not easy to get right. But those two were perfectly matched in deviousness – they played every game: they played their national press, they went to Honda, lots of things." 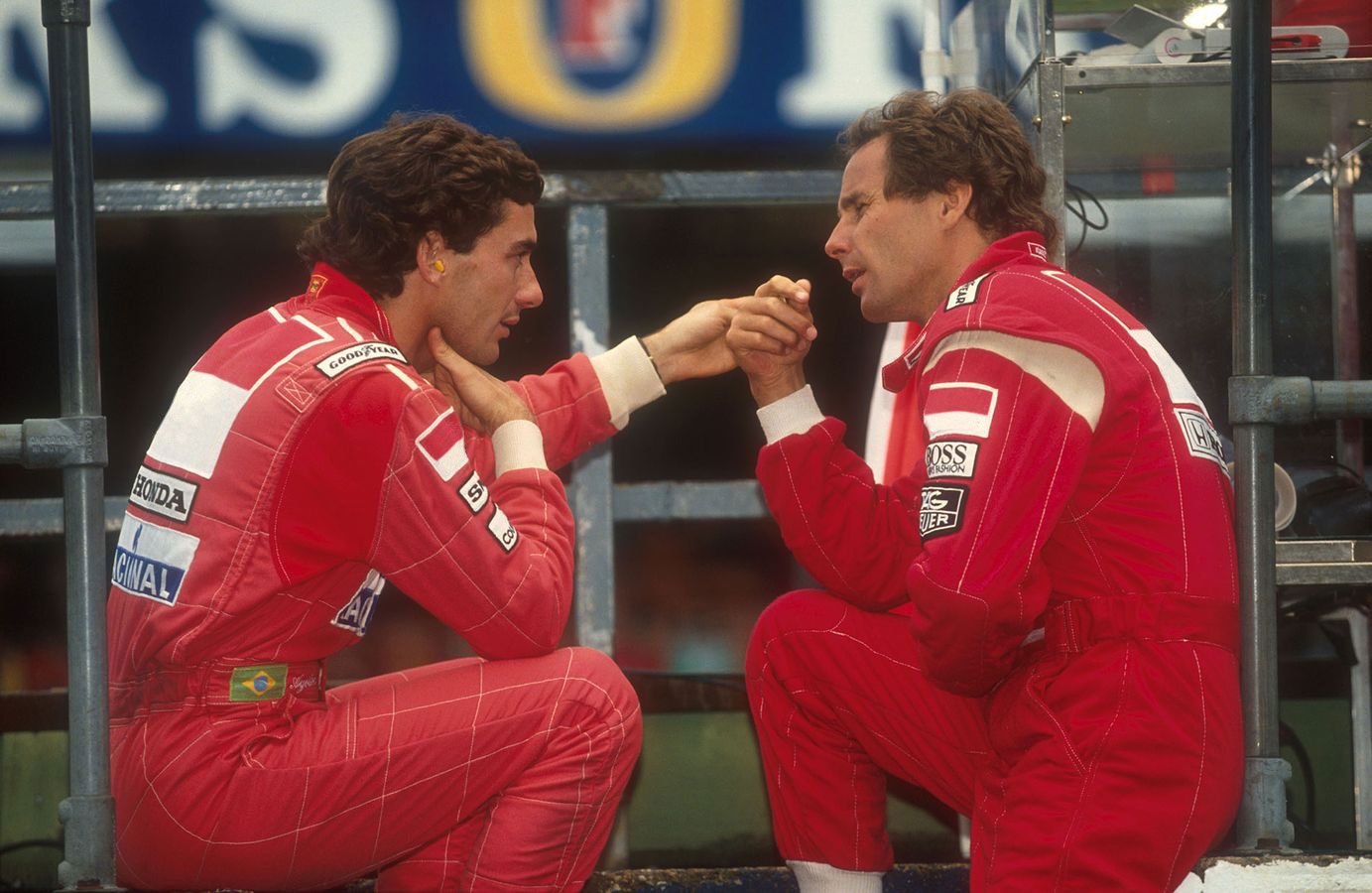 After Alain left, what sort of influence did Gerhard Berger have on Ayrton?

"Gerhard bought humour to the team – he was a massive ice-breaker. He took it to the extreme – Gerhard had no limits, and I mean NO limits. He got to the point where it was positively dangerous: there was one occasion when we were diving in Hamilton, we were at quite a good depth, and Gerhard paddled over and turned my air off! He thought that was hilarious! One that same trip, they threw me into the sea, and then decided to start chumming to see if they could attract sharks! It’s funny now, it wasn’t so funny at the time…!"

What’s your fondest memory of Ayrton?

"He gave me an envelope once, I still have it at home – he had his own personalised stationary, it had his crash helmet on it. The envelope’s been opened, but when he gave it to me it had $10,000 in it – the result of a bet we made that I could not eat a container of chilli in Mexico. Before he could pull the bet back, I wolfed it down.

"That was about the fourth time that he had lost a bet, a big one. And I can remember him giving the envelope of money to me, and saying he was never going to bet ever again, that I’d got him into betting and that it was not a good thing to do!

"That’s a fond memory because getting a smile across Ayrton’s face was not easy, but getting him to part with money was even more difficult!"

"I remember looking at all the traces – the brake and throttle pedal – and you didn’t need to be Einstein to work out what happened. When he came back to the garage, I told him I was disappointed in him. He got it. He didn’t have to say any more. It was one of his rare moments of weakness. I don’t think he was particularly proud of what happened."

Ayrton’s final season with McLaren came in 1993 – what are your memories of some of those fantastic performances with that incredible car, MP4/8?

"At the beginning of the year, I was trying to get him to come over from Brazil, telling him: ‘Don’t worry about the money, come and try the car.’ He was saying, ‘You can’t win with a Ford engine. I don’t’ think I want to drive.’ And our conversations were going back and forth. Eventually, he arrived at Silverstone, got in the car and went out and did one flying lap. Then he came back in – I was about to plug in the intercom when he pulled off his seatbelts and jumped out of the car.

"I wondered what was going on, so we went into the motorhome, and he just said: ‘I get it. This engine is amazing: you lift the throttle and it just keeps on going. We can win with this!’

"That car was one of the best we ever made – no question. It was mind-blowing; it was intelligent – it would know where to change gear; we could reset the suspension eight times in every corner. Ayrton was beyond happy with all the toys he had to play with – it played to his strengths, he lovedscrutinising all the data and optimising the car." 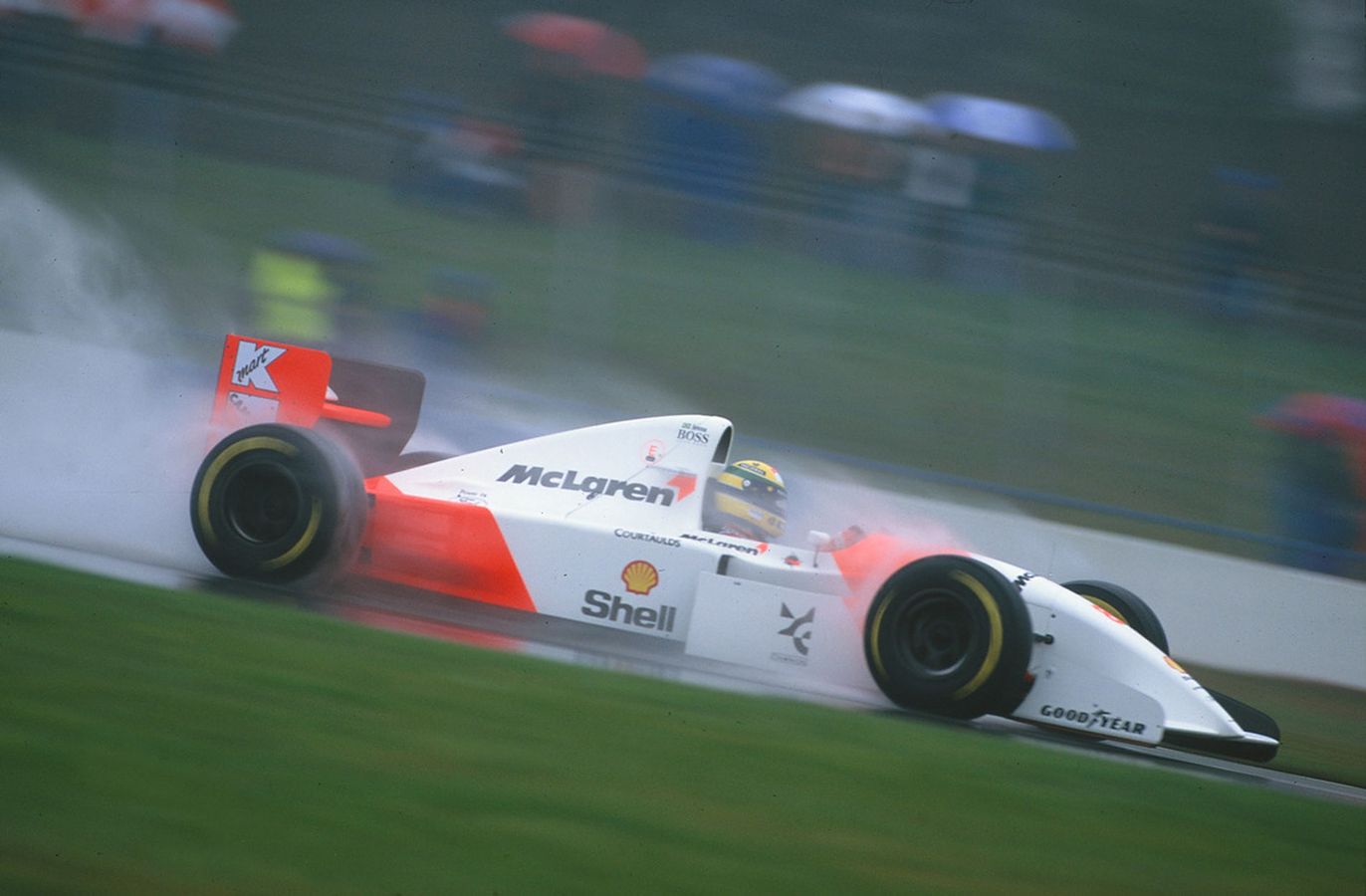 What do you remember about that year’s European Grand Prix at Donington? It was one of Ayrton’s finest ever performances…

"It was the best team-race ever. Ayrton got a lot of the credit, but the team did everything right: we called every pitstop correctly while everyone else got it wrong. So every time we called it right, we moved further ahead, and every time they called it wrong, they fell further back. I remember that race with great fondness – it was phenomenal race, good fun."

What about Ayrton’s last few races – and victories – with McLaren?

"We both arrived at that ultimate race [the 1993 Australian Grand Prix], and I think we both needed a breather from each other. Our relationship was very intense.

“We had people in the team who were all over the place emotionally. I said: ‘For goodness sake, I am trying to get him to stay here – be calm!’

"He was hovering, really hovering. But he was a loyal guy and he told me: ‘Look, I’ve signed a contract and I’ve made a commitment.’

"Even on the night after the race, he was still hovering. I could see Ayrton was wrestling with loyalty - as disastrous as our Peugeot experience was, the moment I told him we had factory engines from Peugeot for 1994, which was after he left, he told me that, if I’d done that deal two months earlier, he would have stayed, because he just could not see a way to win without having a factory engine."

Why do so many people consider Ayrton to be the greatest ever?

"I think it’s because he was so good for the whole time he was on the planet. I can see no positives from the fact that he had an accident and lost his life, but it means that you didn’t see his decline. There are lots of drivers that stay in the sport too long and tarnish their greatness.

"I also think he’s remembered because he was just so unbelievably competitive. He was great, but he had good, human values. He had a few lapses in his life, but he was incredibly principled.

"And he was a good human being."