How Monza got the better of Mika

The McLaren driver tells all about his emotional 1999 Italian GP

How Monza got the better of Mika

The McLaren driver tells all about his emotional 1999 Italian GP

As I think about the Italian Grand Prix I feel a twinge of regret, for I never won at the pista magica. Racing at Monza was always a special experience, because not only were the speeds we achieved there truly incredible, but also, particularly during my years with McLaren, the pressure to succeed was so intense because of our great rivalry with Ferrari. When we went to Monza we wanted to win so, so much; if we could win in Ferrari's back yard, we figured, it would put our fiercest foes under enormous psychological pressure because all of Italy would go crazy with anger.

But, more than that, Monza is somehow a bigger venue than almost any other Grand Prix racetrack. The inimitable Juan Manuel Fangio always said that victory at the famous autodromo was worth two wins anywhere else, and I am not about to contradict the maestro himself.

Equally, when you have an accident at Monza, it is usually a big one, and I consider myself very fortunate to have stepped out of my cars unharmed after more than one of them. During a test once I was at full throttle, on the main straight, when I ran over a bump and my leg knocked the steering wheel's quick-release mechanism. It just came off in my hands and from that moment I was no longer the driver, but a passenger. 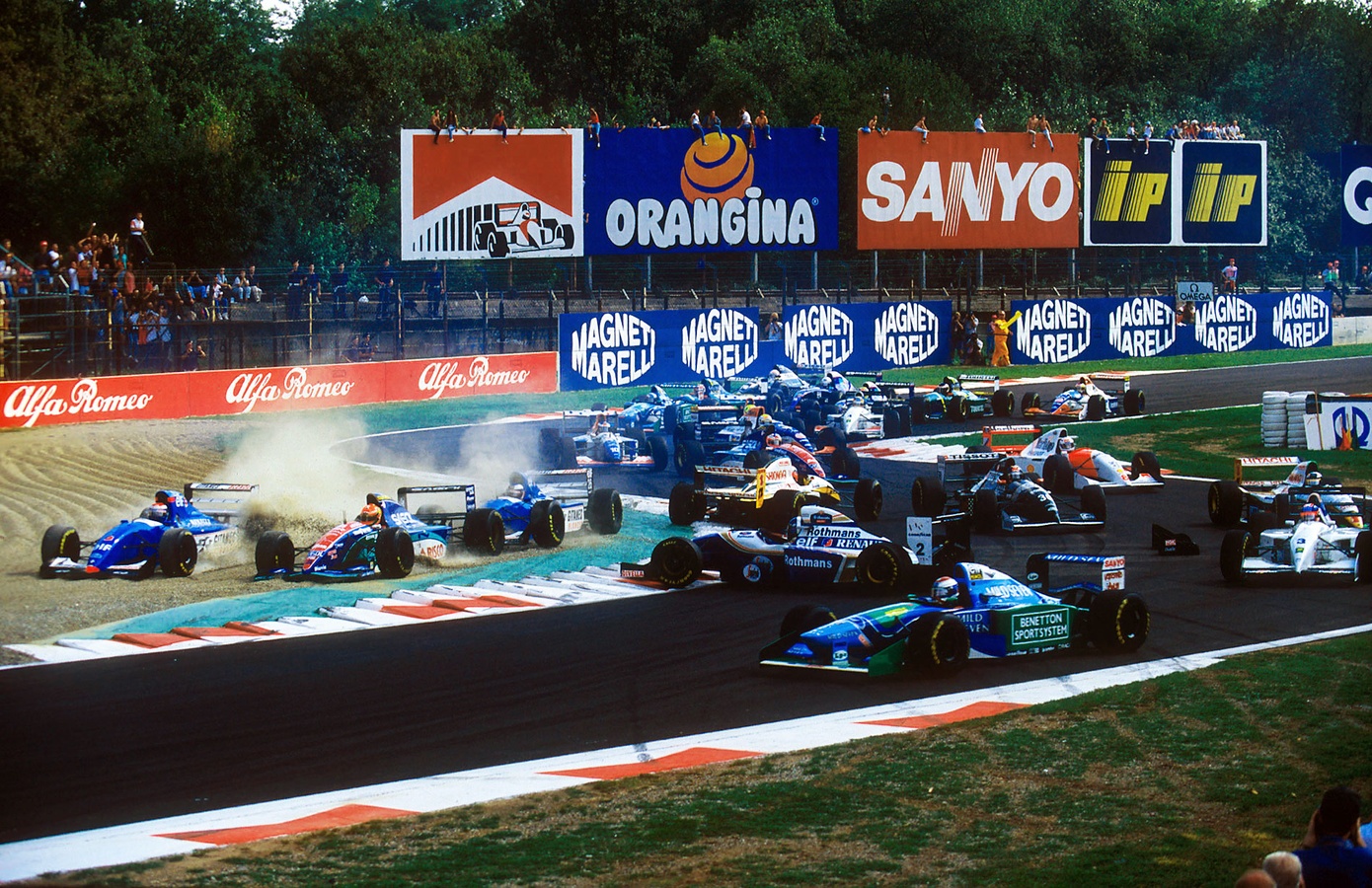 In 1994, my first full year with McLaren, I finished on the podium - some way behind Damon Hill and Gerhard Berger, it must be said - but, given our well-documented Peugeot engine travails that year, we could draw some satisfaction from that. The following year, powered by Mercedes now, we went one better and I finished second - to my old Lotus team-mate Johnny Herbert's Benetton-Renault. As I stood next to Johnny on the podium and looked out at the crowd, I thought that it would not be too long before I would be standing on the top step.

I finished on the podium four times at Monza, but on two other occasions I had a chance of winning and came away with nothing. In 1997 we really pushed on fuel strategy and I was the last of the leading group to pit. If it had worked out I would have shaken out in the lead, but as it happened I ran out of fuel on the way into the pits. 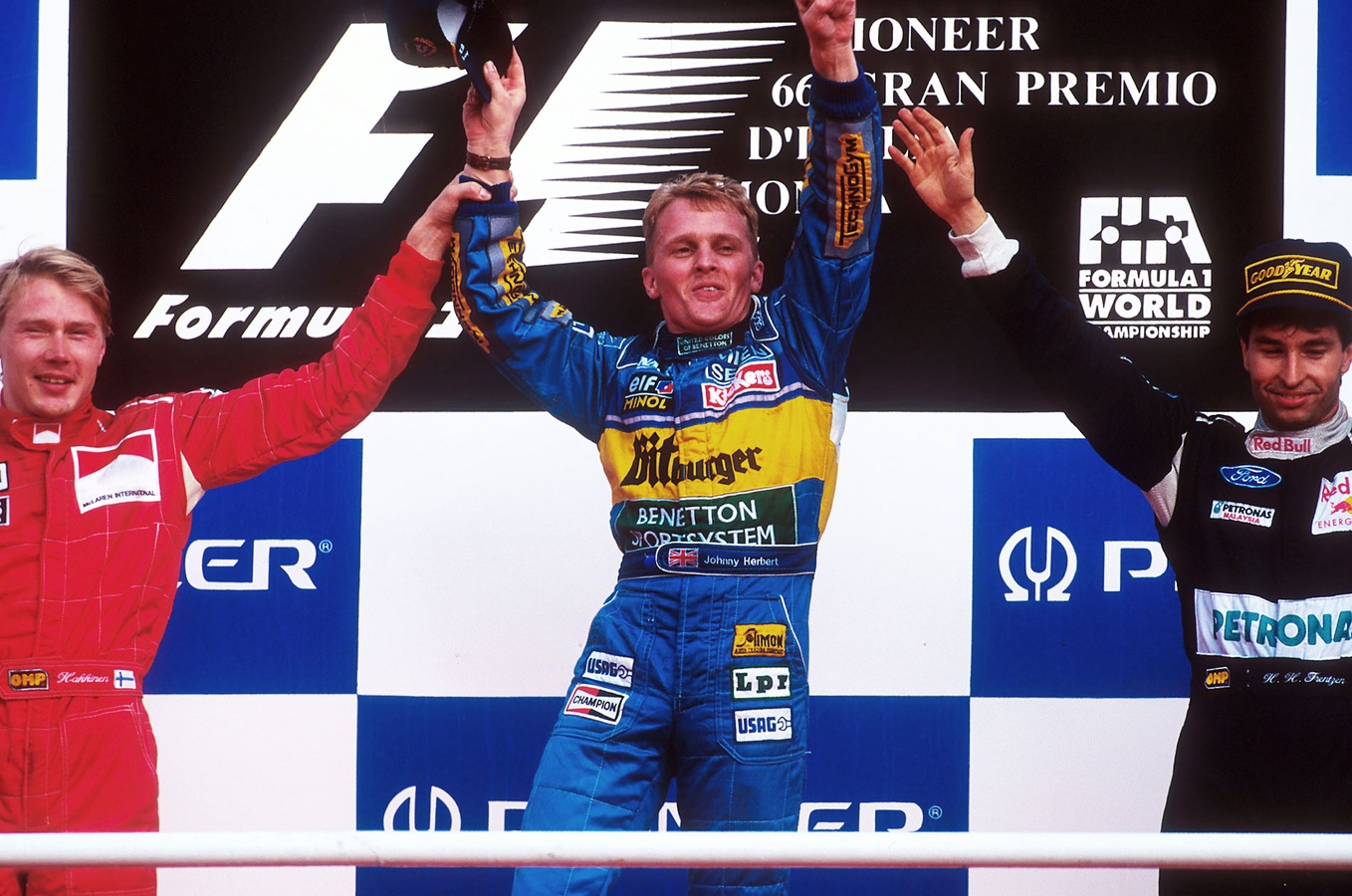 That was frustrating, but sometimes you have to take a calculated risk on strategy to get a decisive advantage over your rivals, and in any case the team had much to celebrate, because my team-mate David Coulthard won.

Not many people know this, but ahead of the 1999 Italian Grand Prix I was suffering from a fever. I was most definitely not at 100 per cent, but somehow I pulled it together to put the car on pole position. A really fast lap of Monza is an almost hypnotic experience: the noise of the crowd blends with the scream of the engine, and, as you come close to 200mph, horizon narrows and the trees, grandstands and old buildings become a blur in your peripheral vision.

Still, I was not fully recovered as I drove to the grid, but I cannot offer that as an excuse for what happened next.

I remember I had a different strategy that day, one which required me to be flat out - 100 per cent, not 95 per cent - from the off. It involved a bit of risk, but sometimes you have to embrace that risk in order to win.

Getting the first chicane at Monza right is always a big challenge, because you are braking from maximum speed down to a pace where it feels like the engine is barely ticking over - all in the space of a few heartbeats. Sometimes the forces make droplets of moisture fly out of your eyes and spatter on your visor. You are using your muscles and being brave, but also technical, changing gear at precisely the right moment and aiming for the optimal trajectory over the kerbs. 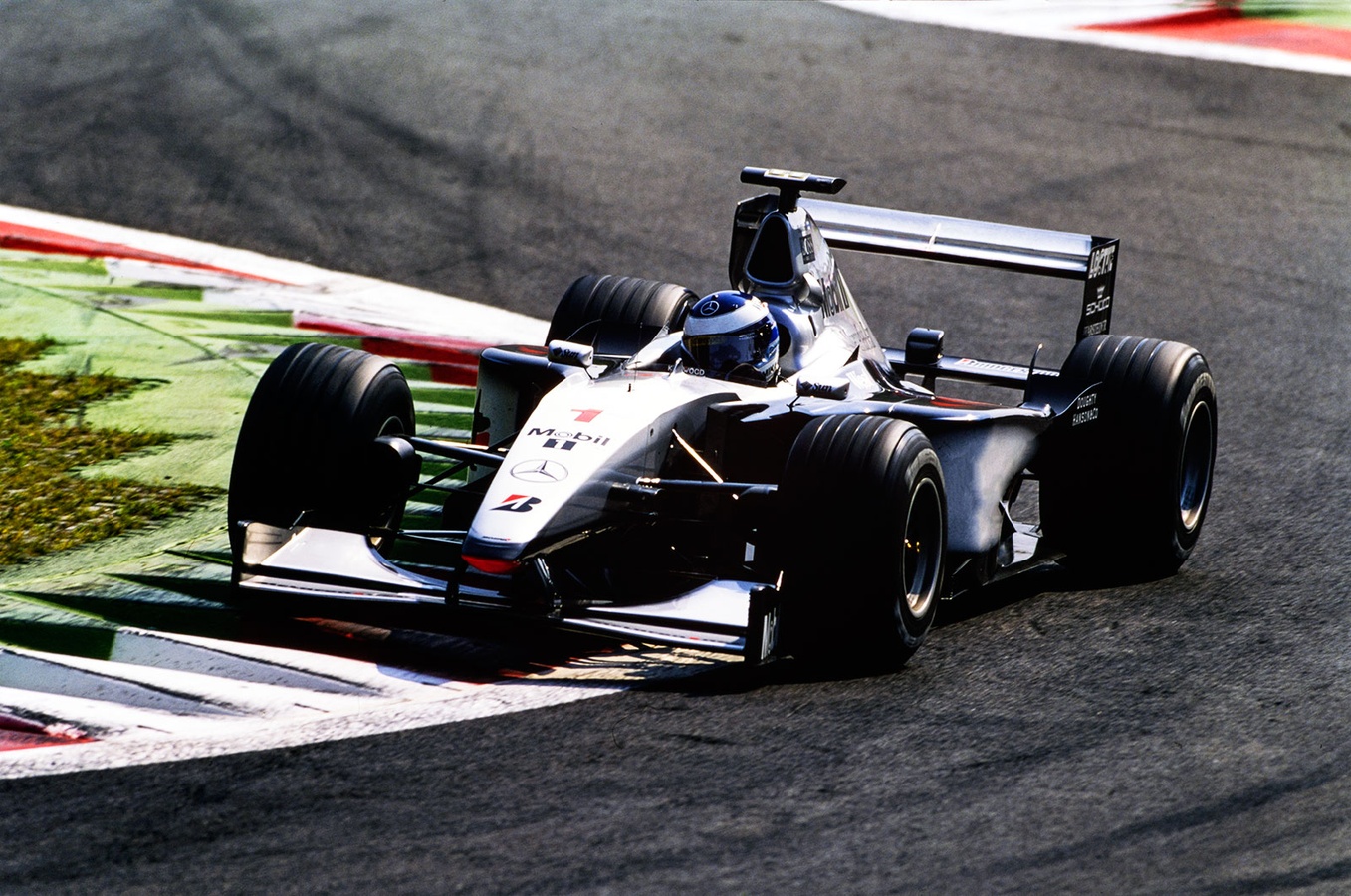 Compounding that challenge, you are running low downforce, so when you turn in to the corner the back end of the car feels flighty. Engineers would suggest locking the diff to add stability, but every set-up choice has consequences elsewhere, and for me that brought too much understeer. So my technique for the corner was to get my foot on the gas on the way in and keep it there. Oh, it felt wrong - your common sense was screaming at you that the car would just go straight on - but actually it worked.

I had done it correctly maybe 30 times during the race, and I was in what commentators like to call "a comfortable lead", when I went down one gear too far and selected first instead of second. I immediately felt the rear wheels lock and I knew there was no time to pull in the clutch or catch the car some other way. I had begun my irreversible journey towards the gravel, and the Monza gravel is deep. 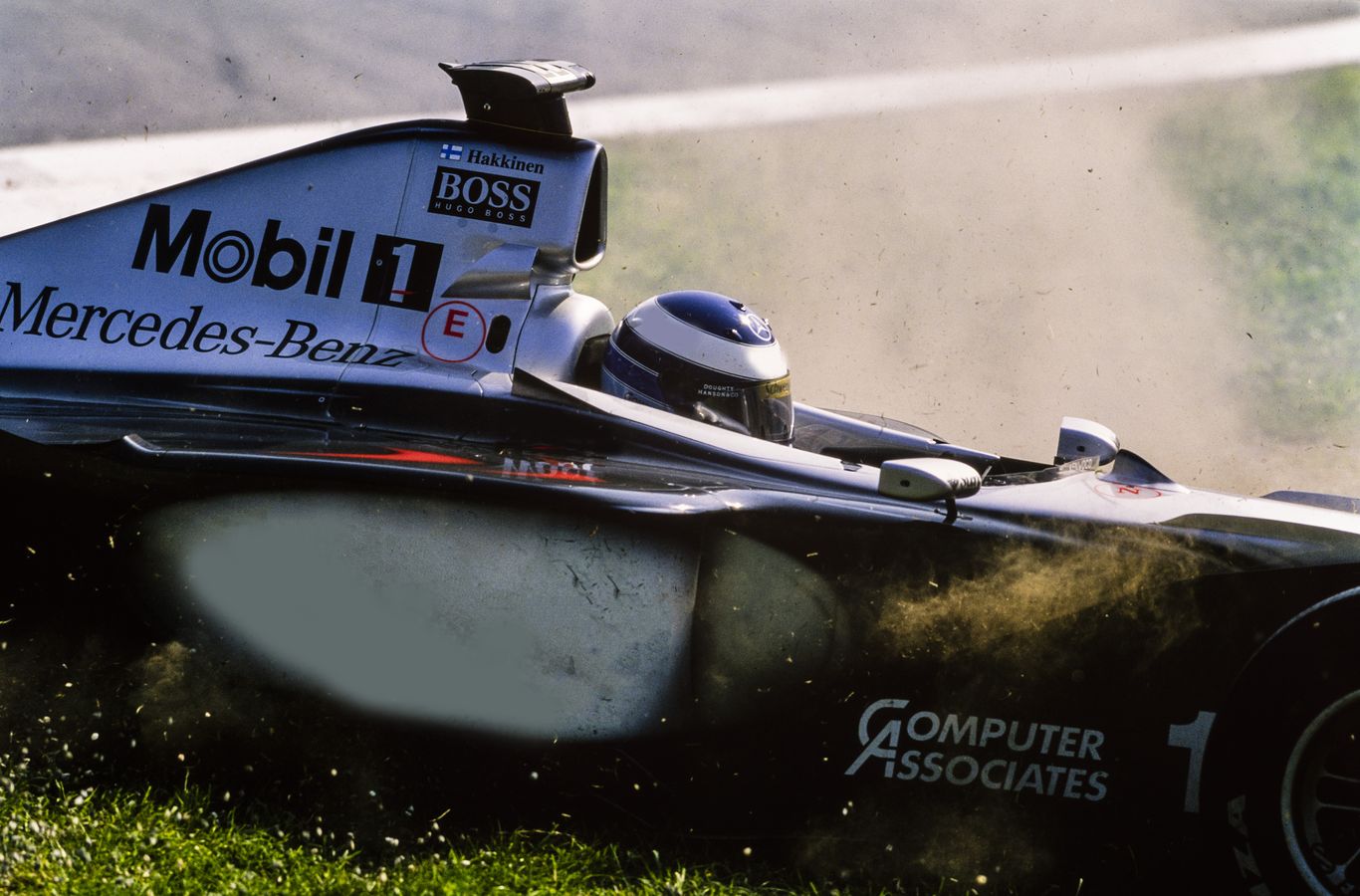 It was over within seconds. My car was buried up to the gearbox; there was no way out.

The emotions came at me in a torrent. I almost stumbled away from the car, heading for the trees, not feeling anger - which is what you usually feel, excoriating yourself after making such a mistake - but instead sadness. In my career I have won at great, historic, evocative circuits such as Monaco, Spa-Francorchamps, Indianapolis, Silverstone and Suzuka, but here at Monza victory had been wrenched from my grasp not by some contrivance of fate but by my own blunder. 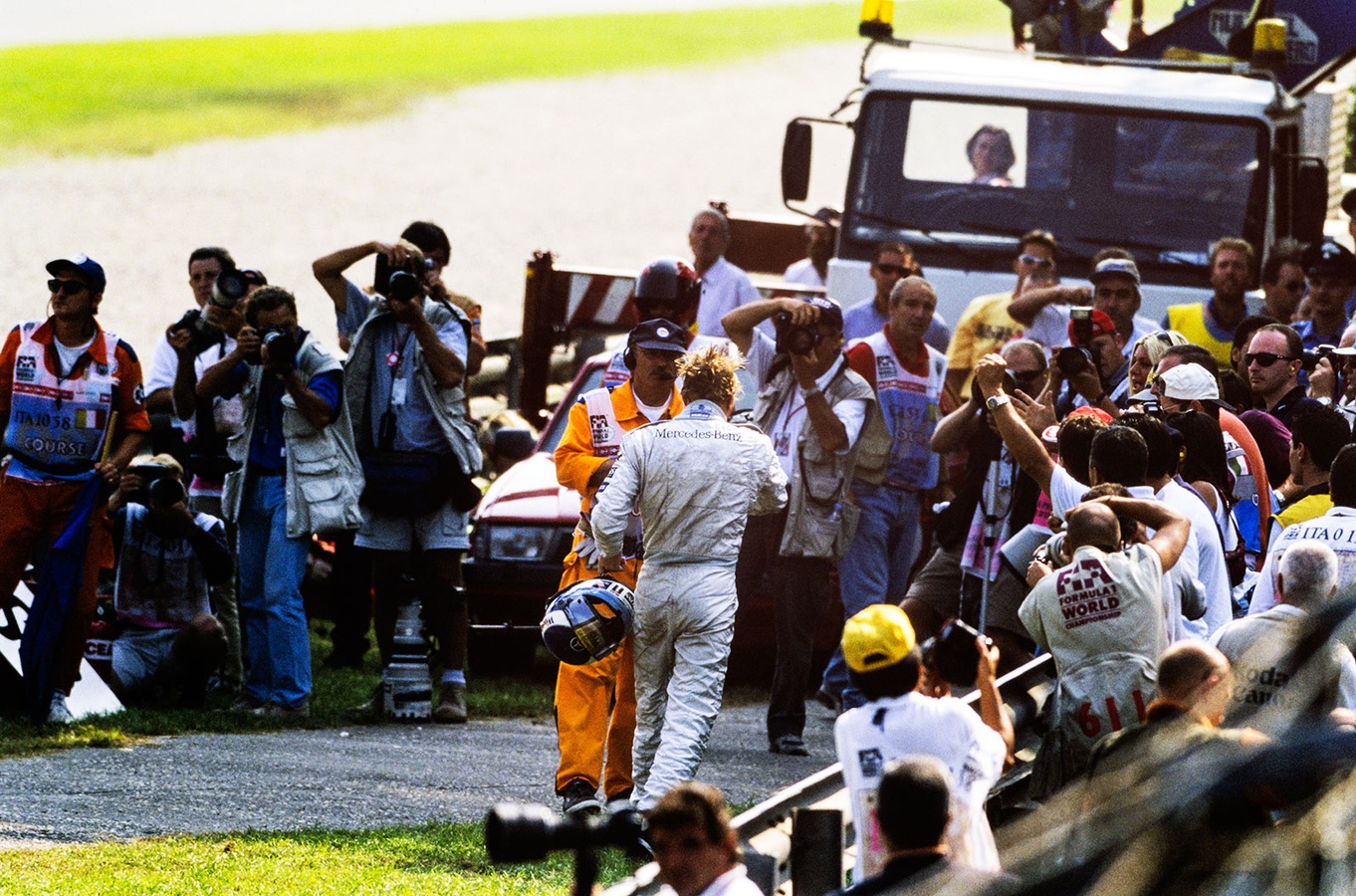 I sat down under a tree to collect my emotions, but it was futile. I cried.

I went on to win the championship that year - thank goodness - but it would always have haunted me if I had not won it because of that mistake. So now it is okay, after a fashion, and I can put that sadness to bed.

But still I dearly wish I could say I had won a Grand Prix at Monza!