Vodafone McLaren Mercedes has been guest-hosting the Sport is GREAT Britain Facebook page this week in the run up to the Santander British Grand Prix, featuring a poll giving you the opportunity to vote for your favourite McLaren British GP moment.

You voted overwhelmingly for Silverstone 2008, when Lewis Hamilton took one of Formula 1’s great wet-weather wins. But what was it that made this race such a cherished memory for so many people, not least Lewis himself? Let’s take a closer look…

Although he had notched up two great wins in Australia and Monaco early in the season, after failing to score in Canada and France Lewis had dropped to fourth in the Drivers’ Championship. Winning the French Grand Prix had put Scuderia Ferrari’s Felipe Massa in the lead, 10 points ahead. A good result at Silverstone would help Lewis regain vital momentum.

“I think that this year's title race is really close - probably even closer than last year's,” said Lewis. “I think consistency is going to be important as we head into the second half of the season, but I'm only 10 points behind Massa and the maths is clear: you can make that up in a single race if all the cards fall in the right way.”

That pressure did not relent in qualifying as Heikki put his MP4-23 on pole position for the first time. With the wind gusting unpredictably across the Northamptonshire speedbowl, the timing of each driver’s qualifying run was crucial. But Lewis would start from fourth on the grid.

“I felt comfortable in the car and the speed was there,” said Lewis. “However, on my first flying lap in Q3 I ran a bit wide at the exit of Priory and went onto the gravel. Obviously I just pushed a little bit too hard and it's a pity that I missed the front row. However, with our strategy and the predicted rain for tomorrow's race everything will be possible.”

While the Silverstone weather is often unpredictable, on Sunday the rain arrived exactly as expected, thoroughly soaking the circuit. This would be a race that demanded courage, skill and a delicacy of touch, as well as a strong start. Lewis began to deliver on those requirements the instant the lights went out, roaring past Kimi Raikkonen and Mark Webber and challenging his team-mate for the lead at the first corner.

A gentle touch of wheels was enough to persuade Lewis to be circumspect, but by lap 5 he was past Heikki and heading off into the distance. Raikkonen also came through, and as the track began to dry out he began to eat into Lewis’s lead, but all that would change at the first pitstops. The Vodafone McLaren Mercedes pit crew quickly fitted a set of scrubbed intermediate tyres, while Raikkonen went on his way with the tyres he had started the race on.

Within a handful of laps another squall of rain lashed the circuit and Raikkonen fell back, losing eight seconds on one lap alone. From then on Lewis would only be headed once, briefly, when he made his second pitstop and BMW’s Nick Heidfeld inherited the lead for a lap.

As his rivals slipped away or spun out of contention, Lewis continued to lap so quickly that alarm bells began to ring on the Vodafone McLaren Mercedes pitwall, and his race engineer gently suggested over the radio that it might be a good idea to slow down.

“He had tremendous grip,” said Martin Whitmarsh. “We were trying to slow him up for most of it, and he was driving within himself but he didn't want to slow up any more, otherwise he feared he'd lose concentration, lose temperature in the tyres.

“But he could have gone a lot quicker if he'd needed to. If you get into that zone that drivers can in these conditions, they can just be so far ahead of the rest of the field.”

To the delight of the home crowd Lewis crossed the finishing line over a minute ahead of second-placed Heidfeld, and a lap ahead of everyone from fourth place down. The result brought him level on three wins apiece with title rival Massa, who struggled with lack of grip throughout the race and finished 13th, two laps down.

“I was in my room preparing for the start and [my brother] Nic came in to see me,” Lewis told reporters after the race. “I told him I was worrying about the race and whether I would be able to get through it without making a mistake.

“He told me not to worry; he told me I was a great wet-weather driver and reminded me of a Cadet kart race I did years ago where I lapped every single one of the karts twice. That made me feel a whole load better and gave me some much-needed additional confidence to go out there and drive as strongly as I did.

“On the last laps I could see the crowd starting to stand up, and I was praying, 'just finish'. You can imagine the emotions going on inside and I wanted to get the car around.”

McLaren Group Executive Chairman Ron Dennis summed up a remarkable Santander British Grand Prix: “Above all it was a magnificent grand prix, full of drama, and it was won by a man who mastered the treacherous conditions faultlessly.” 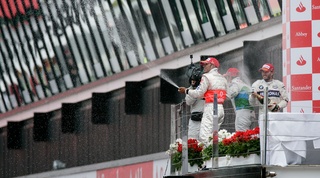