In the final part of our look at the memorable 1976 season we recall the dramatic Japanese GP – a race that saw James Hunt emerge as World Champion.

James Hunt left the United States GP on a high, his second win in a row having put him firmly back in the World Championship fight. All now depended on the final race of the season in Japan.

After celebrating into the early hours with his team at Watkins Glen he headed straight to the Far East rather than back to Europe. The general idea was that he could acclimatise to the country and time difference, have some fun, and even get in in some testing at Fuji.

Inevitably he soon found ways of enjoying himself, and he was certainly in a good mood when he travelled to the track three days before the race weekend started.

“Towards the end of the season, I couldn’t control James,” recalls team manager Alastair Caldwell. “So I let him misbehave. But after we’d won in Canada and the US, we suddenly found ourselves in with a shot and got very serious. We arrived early in Japan and were able to get our body clocks tuned in. Of course, all the other drivers didn’t turn up until Tuesday or Wednesday – and they were jet-lagged and groggy, so we’d already got a little bit of a psychological advantage.” 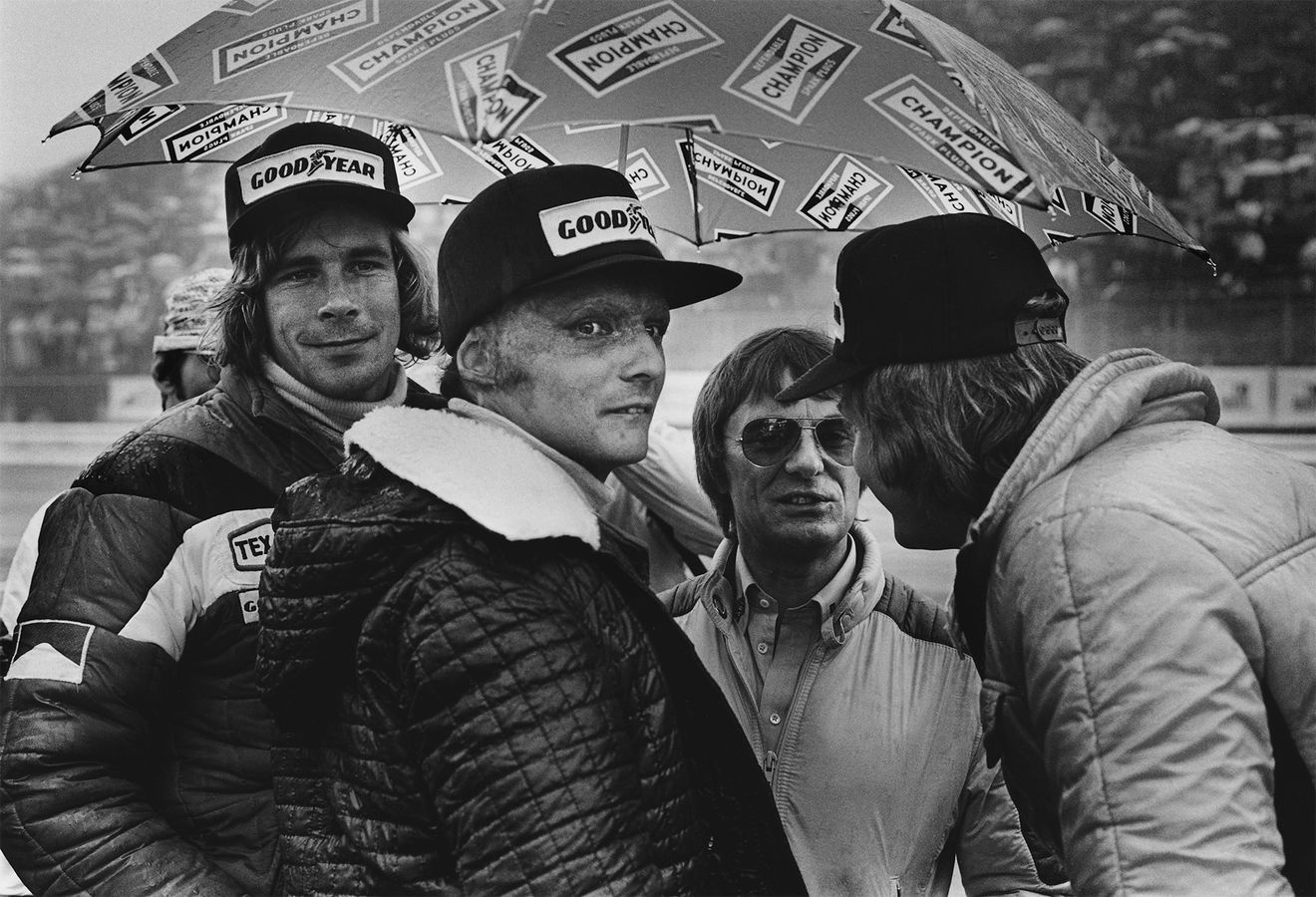 Hunt was one of several F1 drivers who had been to the Japanese track for a demo run in 1974, but he wasn’t really familiar with the place. He didn’t learn much from the test, but it was better than nothing, and gave both the driver and McLaren a head start on the opposition.

“I think that tyre wear will play a very, very important part in the race,” he noted. “It is certainly a very fast circuit and one that should suit the Ferrari. I am undoubtedly doing everything I can to relax. I know and Niki knows that the real pressure is on me. I’ve got to get the points, Niki already has them.”

Meanwhile Lauda was able to put the title fight into perspective: “Of course, I want to win the championship again, but you must remember the Japanese Grand Prix is not the biggest battle I’ve had this year; that was the fight for my life after my accident. I’m just happy to be alive and still racing...”

Friday was sunny and dry, and Mario Andretti set the pace for Lotus, while Lauda and Hunt were fifth and sixth. Andretti maintained his form on Sunday and took pole, and after working on his set-up Hunt jumped up to second, to secure a crucial front-row spot. Lauda was right behind him in third place.

Up to now everything had run to plan, but on Sunday morning the F1 circus woke up to grey skies and heavy rain. The morning warm-up went ahead at 11am, but conditions were impossible, and there were some ashen faces among the drivers after the session. Just a few weeks earlier there had been a debate about safety at the Nurburgring, and this situation was just as heated. 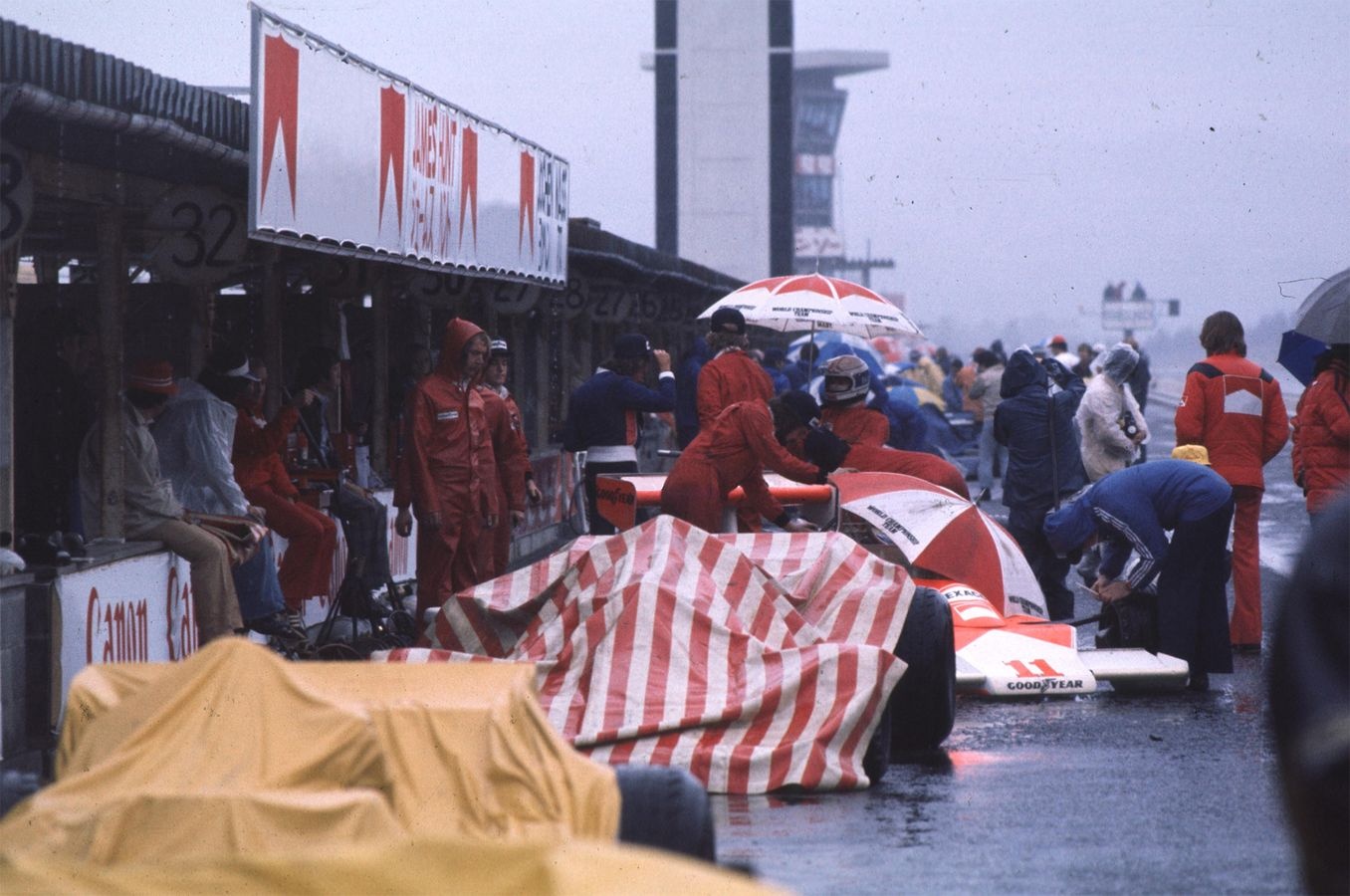 “On Sunday morning, it started raining unbelievably,” Andretti remembers. “Just this torrential rain. It was incredible. There was a drivers’ meeting in the pagoda on Sunday morning – we were trying to delay the start, but there was just no way of reasoning with the organisers.”

As the hours ticked by some 77,000 fans sat patiently in the huge pit straight grandstands and around the track. There was talk of postponing the race until Monday or even the following weekend, but that was soon discounted. There was a suggestion too that the drivers put on some form of demonstration run, but not actually race. At one point Hunt, Lauda and Ronnie Peterson were driven round in an official car for a track inspection, and it was clear that conditions were not getting any better. 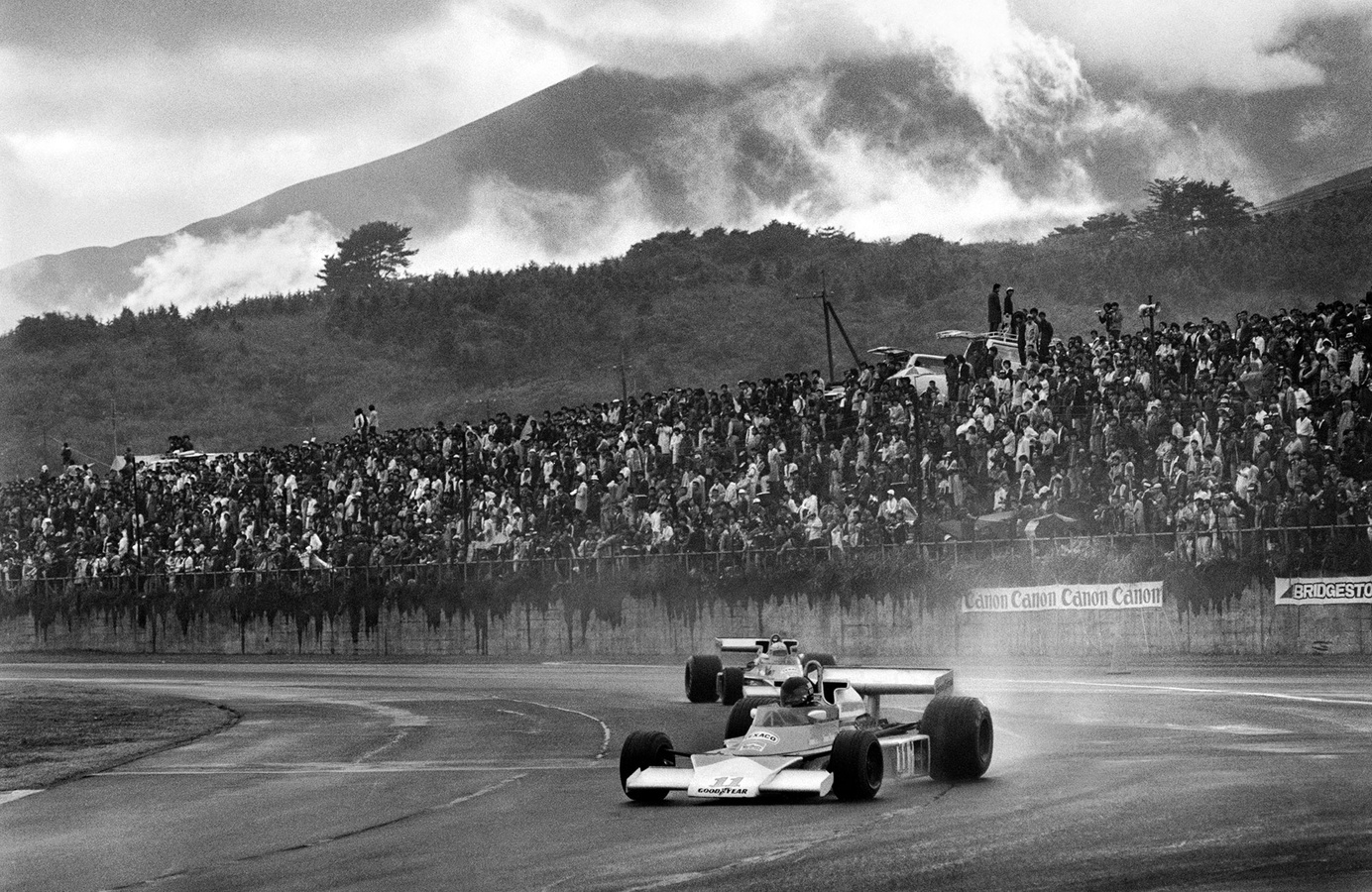 Like many venues of the time, Fuji didn’t have pit garages, and as the scheduled start time approached mechanics moved the cars from the paddock to the pit lane, where they were lined up and covered in tarpaulins. At 1.40pm there was another brief warm-up session, although Lauda and Hunt did not participate. By now the concern was that any lengthy delay to the start time would see the organisers running out of daylight.

Discussions continued until finally the signal was given – the race would go ahead. The drivers climbed into their cockpits, and at the last minute a McLaren team member drilled holes in Hunt’s visor in an attempt to prevent it from misting up.

“James certainly wasn’t relaxed,” team boss Teddy Mater later remembered. “He was very grumpy and worried about the rain. He told me: ‘I’m not going out there. I’m not racing, I’m telling you.’ I didn’t hold him back. But, of course, I knew all along that once he got into the car we wouldn’t be able to stop him. Before a race, James was so nervous he was usually physically ill. He was a difficult animal.”

When the green light flashed on Hunt burst into the lead, ahead of Andretti. Crucially that gave him the advantage of a clear track and unimpeded vision as the field headed towards Turn One, but he was also the first to hit the big puddles. Somehow he made it around the first lap safely in front as the others slipped and slid behind him.

Initially Lauda was down in 10th, and then the race was turned on its head as he pulled into the pits at the end of the second lap. The Ferrari mechanics pounced on the car, asking what was wrong, but after a brief discussion Niki climbed out and walked away. The conditions were too dangerous, he declared, and his thoughts were echoed by Emerson Fittipaldi, Carlos Pace and Larry Perkins, all of whom also pulled out.

The championship was now Hunt’s to lose. As the rain eased off James continued to lead, and he survived a potential drama when Vittorio Brambilla spun off as he tried to overtake. Then his McLaren team-mate Jochen Mass climbed into second, and in effect the German rode shotgun. 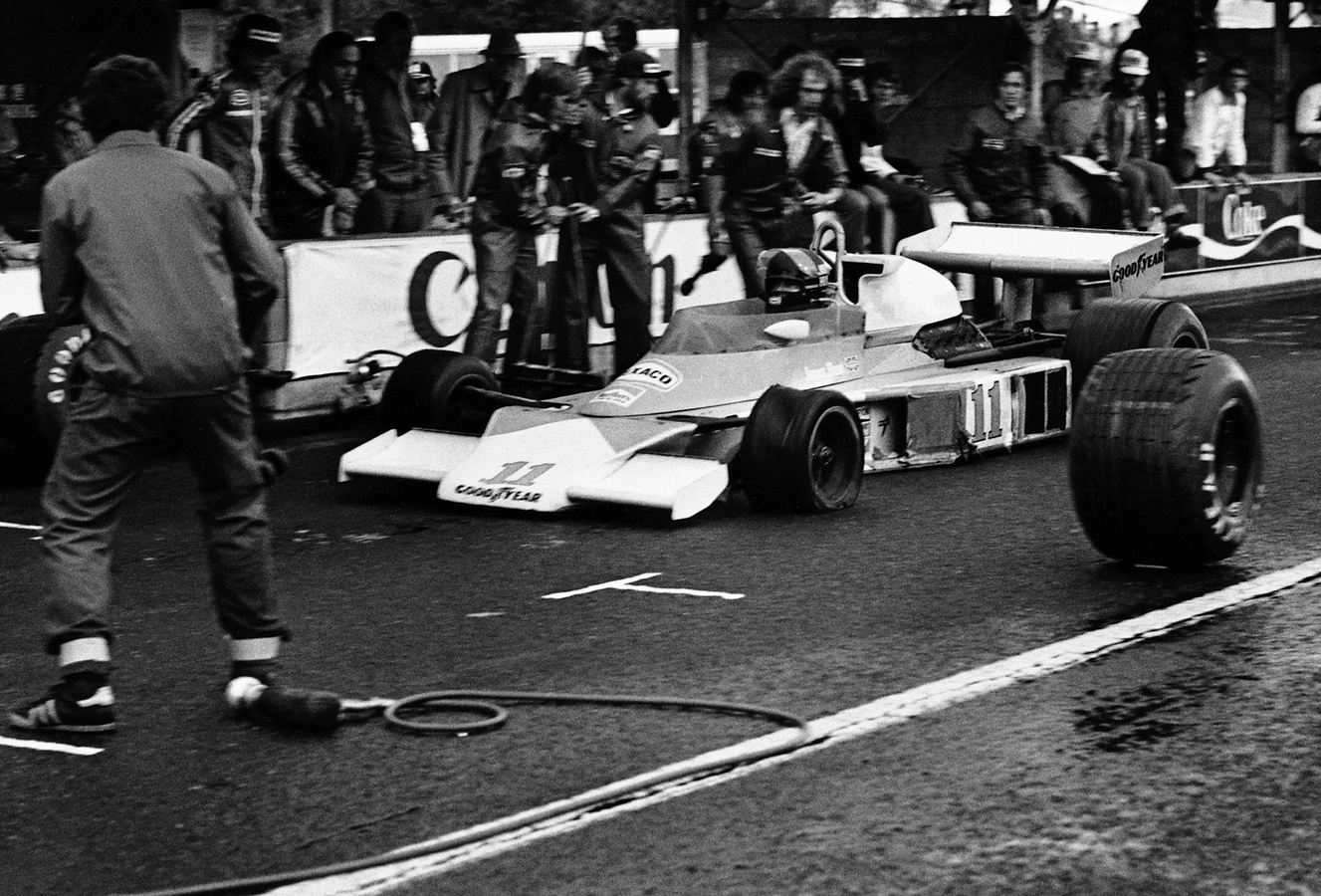 After a while the track dried sufficiently to cause problems for the rain tyres, which were wearing out and overheating. The team signalled Hunt to look for wet patches on the straight, but to the frustration of Caldwell, he didn’t respond.

“We hung out a pit-board with the words ‘cool tyres’ on it,” he recalls. “And Jochen immediately splashed over into the puddles to look after his tyres. But James didn’t respond. He steadfastly drove on the drying line – I was so angry with him.

“We held out another pit board with an arrow pointing to the pits – we would be ready for him if he wanted to stop, but we hung short of holding out an ‘in’ board because we knew it would be his decision.”

Mass eventually spun off, citing a lack of concentration as he was taking it easy and not threatening Hunt up ahead. Struggling with his tyres, James was passed by Patrick Depailler – who was soon forced to pit with his own tyre issues – and then by the flying Andretti, who had conserved his rubber well.

“My tyres were getting worse too,” Andretti remembers. “The final corner, a long-radius, uphill right-hander, was just killing the left-front. But I had to keep pushing and had to search out the wet parts of the track. I could see the tread changing colour and the car was under-steering more and more. It was getting bad but I was gonna ride it out, try and bring it home and still win it.”

Second was still good enough to win the title, but then came a moment of high drama when Hunt’s left front tyre blew, and the decision to pit was made for him. Sparks flew from the bottom of the car as he headed down the pitlane, and after a delay getting it up on the jacks, all four wheels were changed in 27 seconds. 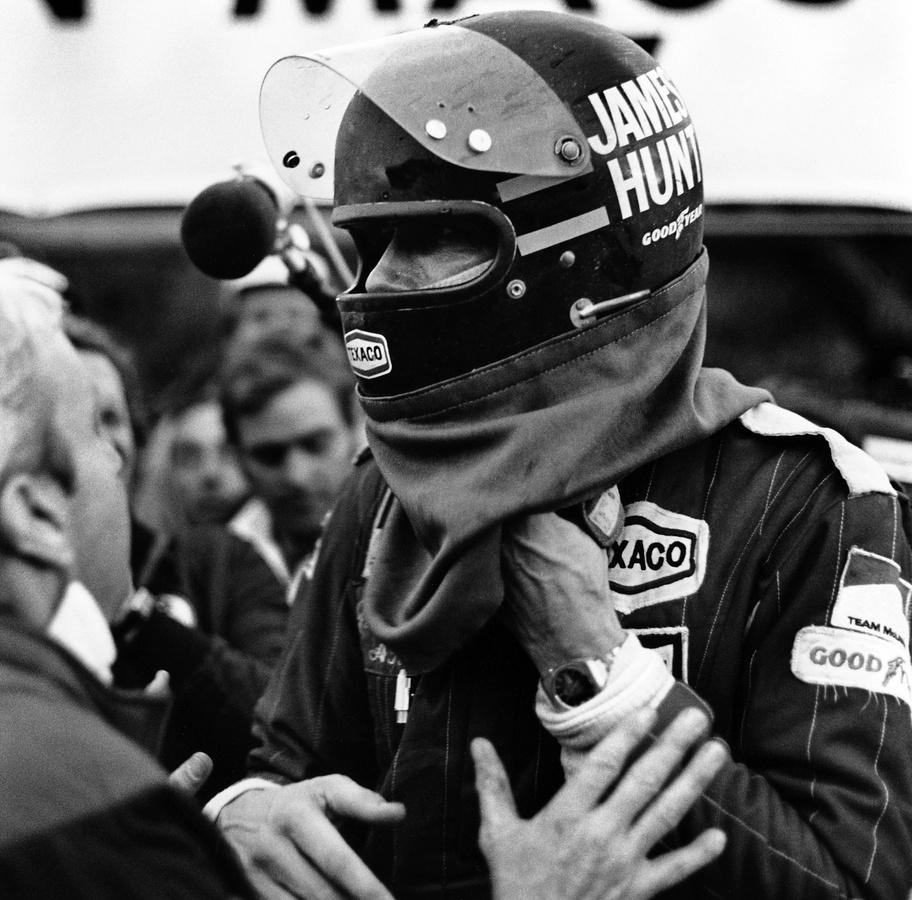 When he returned to the track Hunt didn’t know how many positions he had lost. On his new tyres he began a charge, passing Alan Jones and an unusually helpful Clay Regazzoni, in his last race for Ferrari. All too soon, the chequered flag flew – and he crossed the line in third place, behind winner Andretti and Depailler. He had done just enough to win the title. But when he drove into the pit-lane at the end of the slowing down lap, he didn’t realise that he’d made it – until team boss Mayer successfully convinced him that he was indeed third.

“When he drove back into the pits, he didn’t believe that he’d done enough,” Mayer recalled. “He was shouting at me, saying terrible things. But I kept shouting at him, ‘James, you’ve won!’ He couldn’t hear us. It took him two or three minutes to calm down enough for it to sink in.” 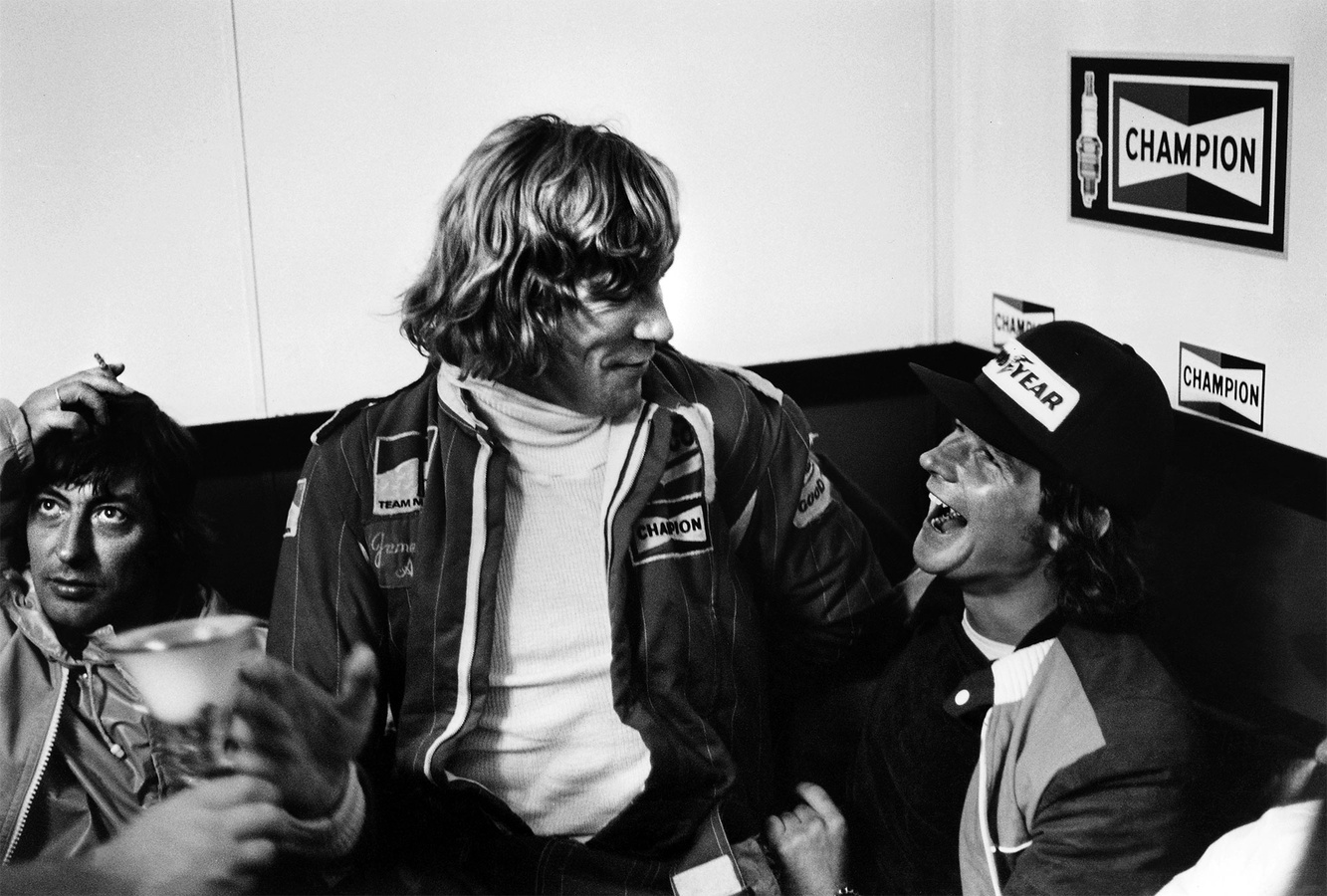 “I was absolutely determined not to think I was World Champion and then be disappointed,” said Hunt. “Because there were 300 good reasons why something should have gone wrong. It was only really when I checked the laps and when the organisers said I was third – and there were no protests in the wind – that I allowed myself to start believing it.

“I mean I still didn’t feel that good when they put me up on third place on the rostrum because I wasn’t sure I wasn’t going to be dragged off there at the last minute. So the championship win came to me slowly.”

When it finally sunk in, the celebrations began. First James had to deal with the inevitable media attention: “It would have been completely impossible for me in Europe, but in Japan and so far from home I knew most of the people I had to deal with after the race, the press regulars who travel the circuits with us, so that made it easier.”

He partied through the night with friends and team members, before the whole gang headed to Tokyo’s Narita Airport for the flight home and to a huge reception in London. James Hunt was World Champion, and a national hero – and his life would never be the same again.