At the end of her rousing show at Baku’s Crystal Hall on the eve of the Azerbaijan Grand Prix, iconic R&B diva Christina Aguilera returned to the stage to encore with one of her biggest, most bombastic hits, ‘Fighter’.

The lyrics read like a self-help manual for those seeking belief and purpose in the face of adversity:

The song brought the curtain down on Aguilera’s storming set, but – in many ways – those exact lyrics were also the curtain-raiser to Fernando Alonso’s phenomenal, attacking performance in the following day’s Azerbaijan Grand Prix.

Despite qualifying mid-grid, Fernando remained sanguine about his chances in Baku, correctly reasoning that sticking around until the end of the race, regardless of grid position, was likely to result in a clutch of points.

If that was his approach going into the race, it didn’t take long for the wheels to fall off – almost literally. On the first lap, at the exit of Turn Two, he was side-swiped by another car, the collision puncturing both right-hand tyres and ripping off sundry bits of bodywork.

By the time he arrived back at the pits, those two punctured tyres were cut to shreds, the car so hard to control that he actually grazed the entry wall as he manhandled his way into the pit-lane.

Over the radio, there was no suggestion that this was a raceable car. “I reached the pitlane thanks to a miracle” said Fernando afterwards. “I didn't have two wheels or front wing or floor or anything. They changed the tyres and they told me the car was heavily damaged, so I thought I wouldn't be able to finish or that I would be very slow.

“But we didn’t park or retire the car, and fought for every tenth, every lap, close to the walls all race long. I think it was the best race of my life.”

It might sound like an exaggerated claim – after all, he ‘only’ finished seventh – but closer scrutiny of the damage to the car – only possible once the dust had settled at the end of a frantic afternoon – showed just how much of a giant-killing performance it had been.

The rear diffuser had been damaged, parts were missing from his right-hand bargeboard, and, most critically, the front floor, which helps channel air beneath the car looked like it had been savaged with a hammer. Fernando proved that the car was drivable, but it was by no means performing to its optimum.

Perhaps even more impressively, Fernando hadn’t even felt the vaguest temptation to get on the radio to the team and complain about the loss of performance or the lack of driveability. He just put his head down and got on with it.

But should we really be all that surprised? After all, the little Spaniard has established his career with a series of brilliant, against-the-odds drives that have moulded him into Formula 1’s most fearless and combative racer.

Let’s take a look at a handful of those fighting achievements. 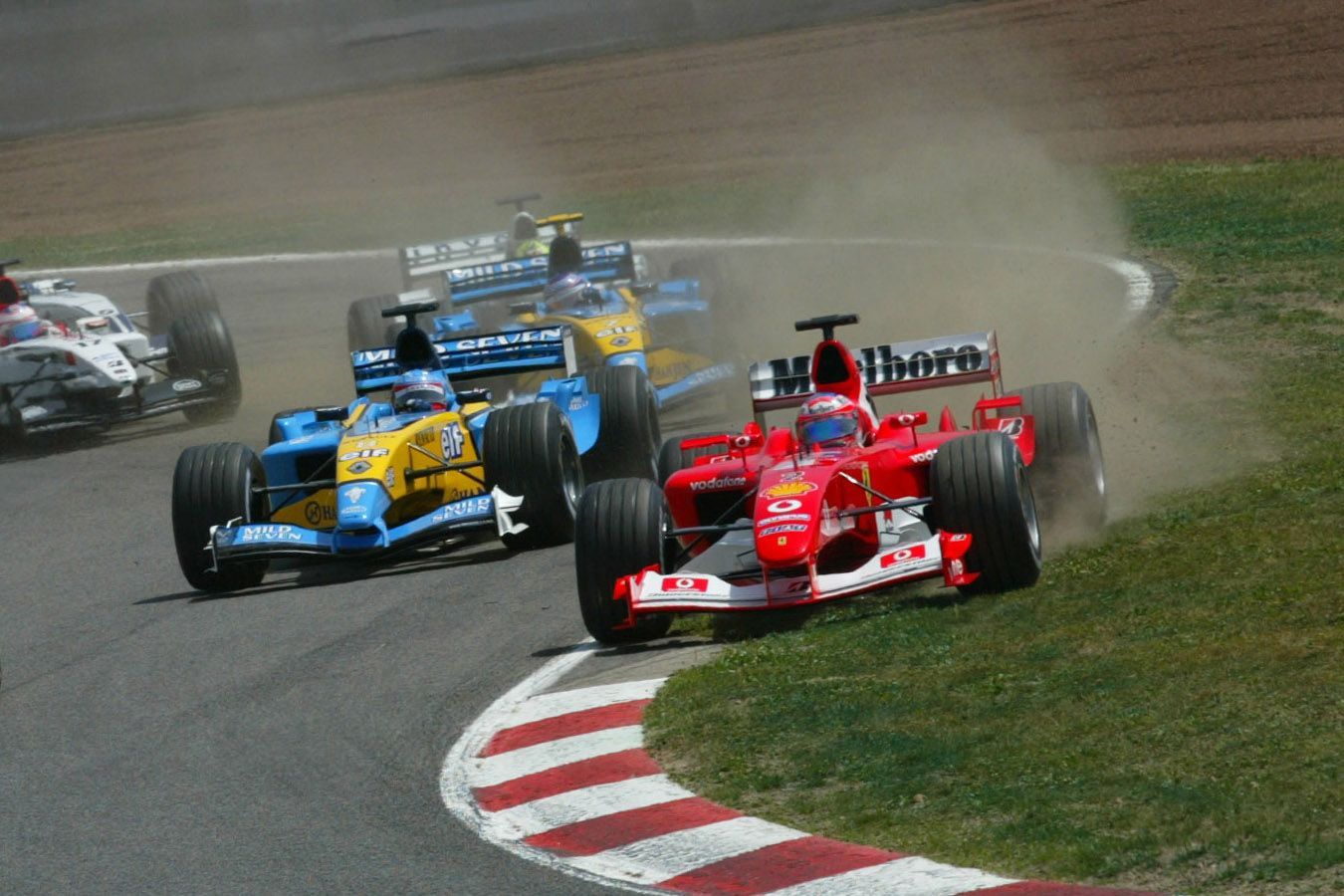 For some drivers, the prospect of racing a car that’s less than capable of winning races is the signal to lose focus. For Fernando, in 2003, it was the spur with which to achieve greatness.

That year’s Renault R23 had already proved itself to be quick, but, at that early stage of the season, was still lacking the outright pace of the frontrunning Ferraris, McLarens and Williams.

Importantly, however, it had already proved to be a versatile and eminently drivable car: Fernando had taken a surprise pole at Malaysia in only the second grand prix of the year, but wasn’t able to hold on to the pacier McLaren and Ferrari during the race.

At his home race in Barcelona, the fifth event of the year, his car still lagged behind the red cars, but Fernando was unwilling to let that hold him back. He drove a mighty race, flat-out for every single lap, resolute in his chase of eventual winner Michael Schumacher.

If Malaysia had shown that Fernando had the pace over a single, flying lap, Barcelona demonstrated that he had the endurance and determination to fight over a whole race distance. Indeed, the world was put on notice.

A few months later, he had won his first race, stealing the record for youngest ever grand prix winner at the time away from no less than Bruce McLaren. 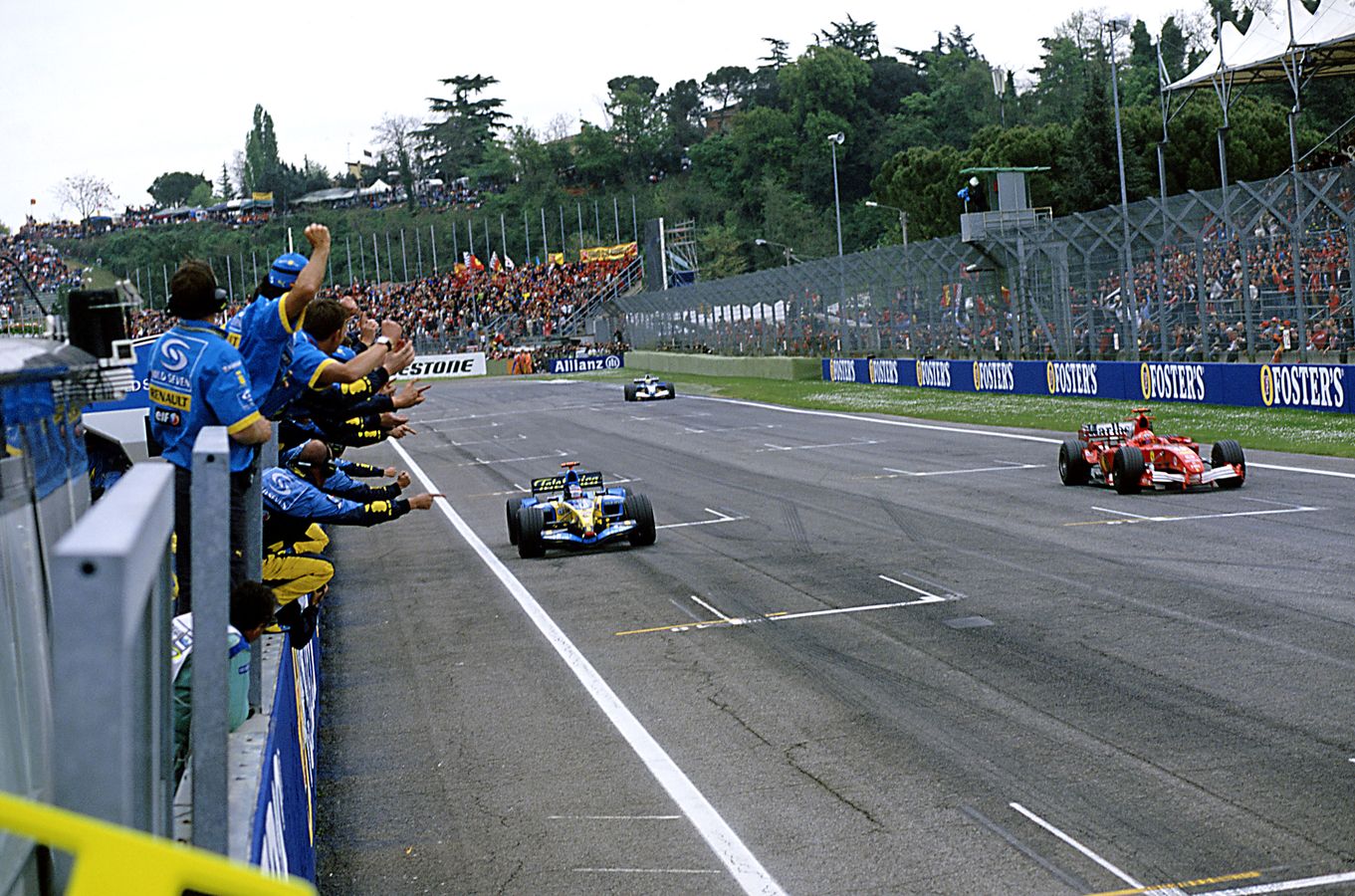 When Michael Schumacher’s red car pulled onto the rear wing of Fernando’s blue and yellow Renault 12 laps from the end of the Imola race, most assumed the Spaniard would simply be another scalp for the German, who had climbed inexorably through the field from an uncharacteristic 13th position on the grid.

But this one was to be different.

Fernando, as he was rapidly proving, was in no mood to play the subjugate. In the slower car (his fastest lap was 1.275s off Schumacher’s best), he poured all his energy into driving an utterly brilliant, defensive race.

It was a masterclass in defensive driving: he carefully positioned his car so that Schumacher couldn’t find a way to nose down the inside on corner entry; he carefully delayed his throttle pick-up so that the German would be unable to gain an advantage along the next straight; and he remained resolutely calm throughout, despite having a six-time world champion impatiently breathing down his neck.

The spontaneous standing ovation that greeted the little Spaniard when he entered the media centre at the end of the race told you that this was the drive of a new F1 superstar.

This was the race where Fernando the world champion-elect made his grand entrance. 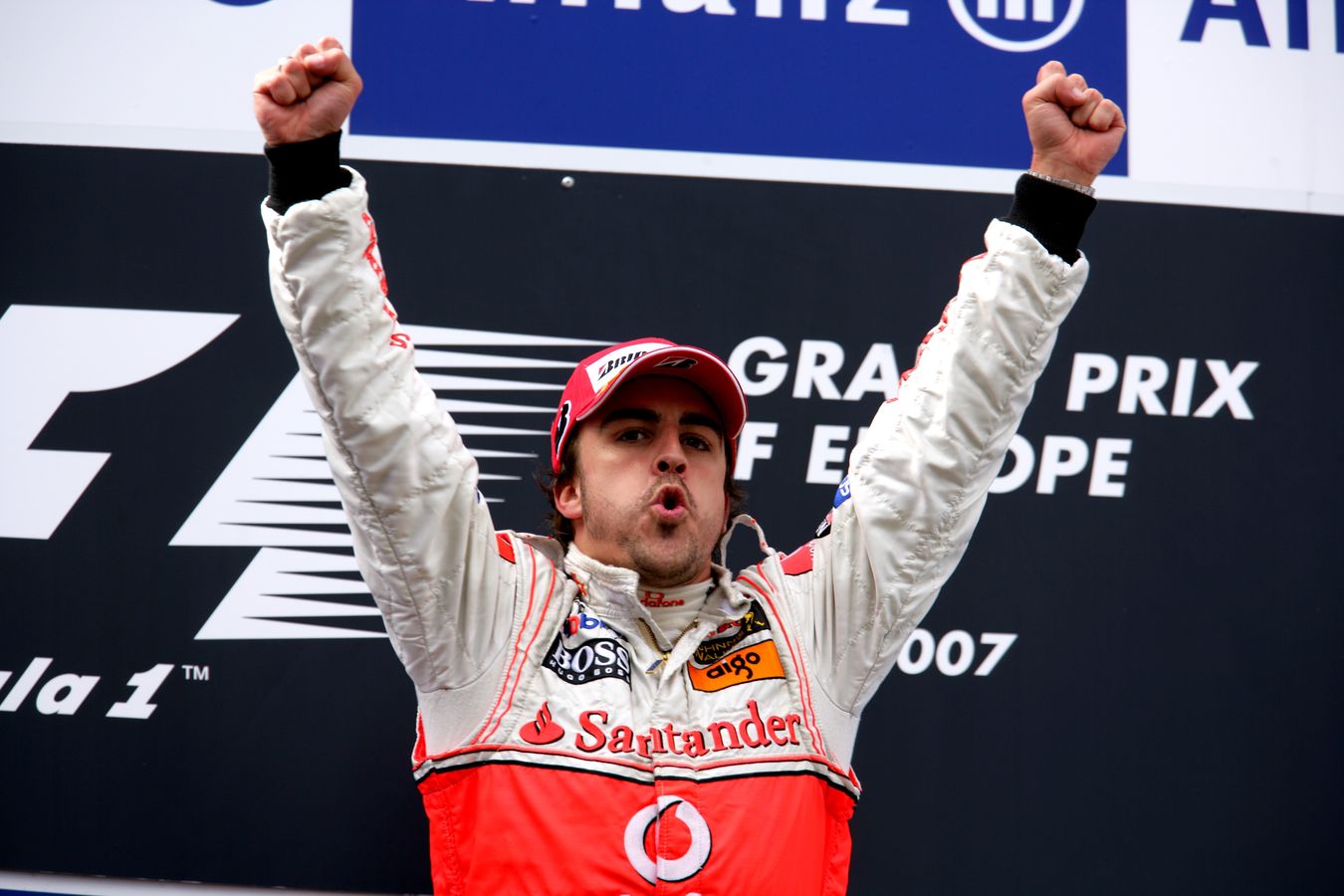 This was another of those races that Fernando needed to win. After a spectacular win in Monte Carlo in the spring, he’d suffered two disillusioned defeats to team-mate Lewis Hamilton, then seen Ferrari’s Kimi Raikkonen carve out two solid wins to pull himself into championship contention.

The European GP, held that year at the Nürburgring, saw Hamilton end his unprecedented run of nine successive rookie podium finishes – thanks to a fearsome rain shower that decimated quarter of the field and left the young Briton fighting to recover from the back.

Fernando had been in the hunt for victory all afternoon, but, after the track had dried out, another late-race shower saw him and rival Felipe Massa scramble to the pits for fresh rubber – and a desperate fight for the win over five frantic laps.

The damp had turned the tables, the McLaren better able to use its rubber at lower temperatures than the Ferrari, and Fernando closed impatiently on the Brazilian. He pounced immediately, the pair clashing wheels as Fernando somewhat inelegantly muscled past to take victory.

It was an opportunistic and uncompromising victory, and also prompted the amusing schoolboy exhange between the two drivers in the post-race ‘cool-down’ room: 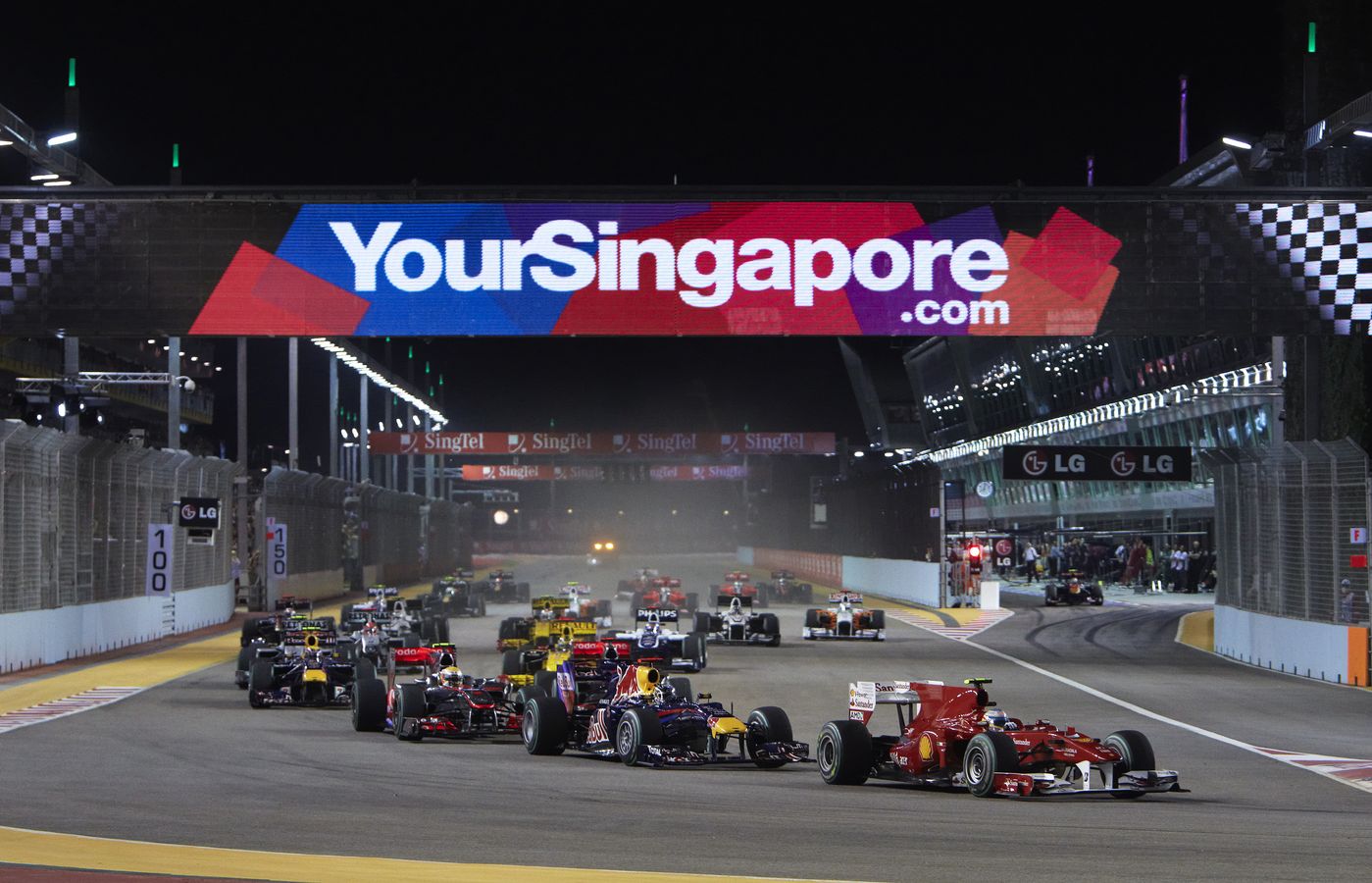 This was the only race (so far!) at which Fernando achieved that rarest of feats, the Grand Chelem.

The Grand Chelem, you may well ask?

A Grand Chelem is when a driver sets pole, leads every lap, wins the race and sets fastest lap. It’s the motor racing equivalent of the sporting grand slam.

This result required something a little different from the Fernando playbook. At Singapore, as at the previous race at Monza, Fernando was on the world title hunt: he’d won spectacularly in front of the adoring Tifosi in Italy, but arrived in Singapore anxious to prove that his Ferrari could triumph on the twisty tracks as well as the quick ones.

As a result, this wasn’t a race that required all-out attack; rather, Fernando needed to control everything, grind down his rivals through persistence rather than aggression. As the season neared its conclusion, and with – remember – five drivers still firmly in the hunt for the title (Fernando, Lewis, Jenson and the Red Bulls of Mark Webber and eventual champion Sebastian Vettel), it was essential to wear down the morale of his rivals.

And where better to do it than at the Marina Bay circuit, one of the harshest and most unrelenting tracks on the calendar.

The Grand Chelem tells its own story of Fernando’s dominance, but it’s not the timing sheets that say the most about this particular race; it’s the score sheets. Fernando went into the weekend in third place, 21 points off the top of the table; he came out of it in second position, just 11 points off the leader.

The hunt for the 2010 title was well and truly on. 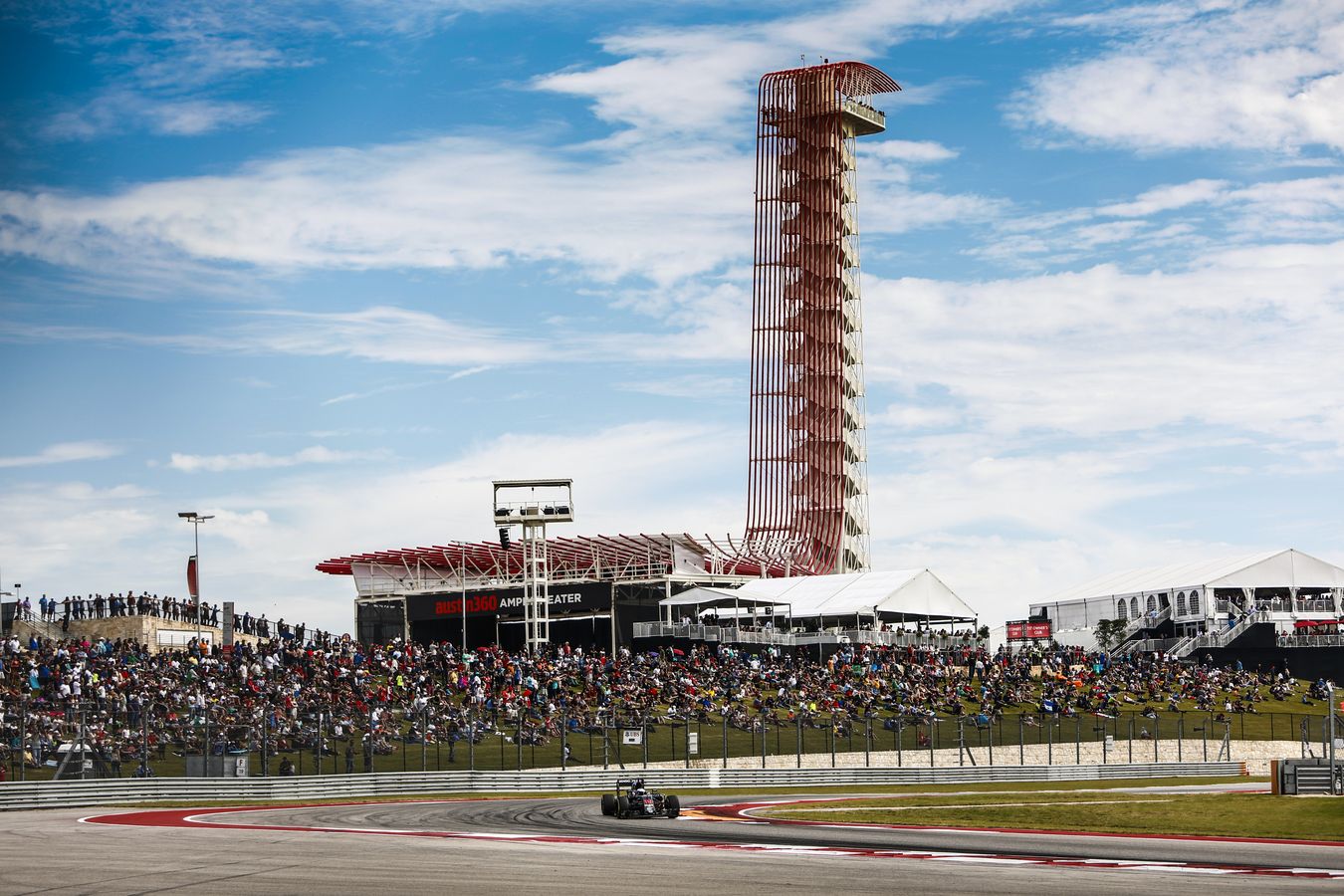 In the second season of the McLaren Honda partnership, the MP4-31 had proved to be competitive at the tighter, slower tracks on the calendar. That meant (relatively) rich pickings at places like Monaco, Hungary and Singapore but relatively little fortune elsewhere.

When the team found itself looking unexpectedly competitive around the high-speed sweeps of Austin’s Circuit Of The Americas, Fernando took the bull by the horns, keen to maximise every opportunity that came his way.

That meant using every trick in the book, including some cleverly positioned radio chat, to ensure that his progress was serene on race day.

Don’t forget, at the same race a year earlier, he had campaigned for the Safety Car to be brought out so that debris could be cleared from the track, a move that would - coincidentally – have allowed him to close the huge gap to the pack after a first-lap tangle.

In 2016, Fernando was keen to use the radio to his advantage. A late-race pounce to pass Felipe Massa resulted in the pair tangling wheels, with Felipe receiving a puncture as a result of the clash. It was a risky move, one investigated by the stewards after the race, but Fernando made sure his position clear was immediately clear by stating over the radio: “Felipe closed me on the door. I was already alongside him… you cannot close the door there that easy with half a car in front of you.”

With the stewards deeming no further action necessary, and Fernando passing a tyre-hobbled Carlos Sainz Jnr on the penultimate lap, fifth position was the very best that could he earned from a difficult weekend.

Made me learn a little bit faster…

Factor in a stunning qualifying lap at last year’s Indy 500, coupled with a storming drive at the front, and a debut win in the World Endurance Championship, driving alongside Sebastien Buemi and Kazuki Nakajima for Toyota, and it’s clear to see that Fernando knows how to boss a racing car to great effect.

… thanks for making me a fighter.

Fernando: one of the best?

Why the McLaren driver is considered the best on the grid