At the start of the century, Formula 1 was in need of a shake-up. Ferrari’s Michael Schumacher had demolished the opposition with five consecutive world titles and the sport was crying out for a new, young star to break the domination.

The saviour was the emerging talent from the Asturias region of Spain, who was already the sport’s youngest winner of a grand prix. All Fernando Alonso needed was to mount a consistent world title campaign and his 2005 challenger was the car to do just that.

“My new car, the Renault R25 is the best Formula 1 car that I have ever driven,” said Alonso before the start of the new season. “Everyone at Renault is confident that we finally have a car capable of challenging for the world championship.”

Brilliant wins in two of the first three races turned the form book on its head and as the sport headed to the first European race of the season at Imola, Fernando was set for the greatest fight of his career to date – taking on the seven-time world champion in a head-to-head dogfight – in Ferrari’s backyard.

Unrelenting, aggressive, yet beautifully measured, Alonso drove a superb race as he managed to keep Michael Schumacher at bay for the final, thrilling 12 laps of the 2005 San Marino Grand Prix. All doubts about his temperament were blown away; it was a turning point in the sport and the start of a new era. 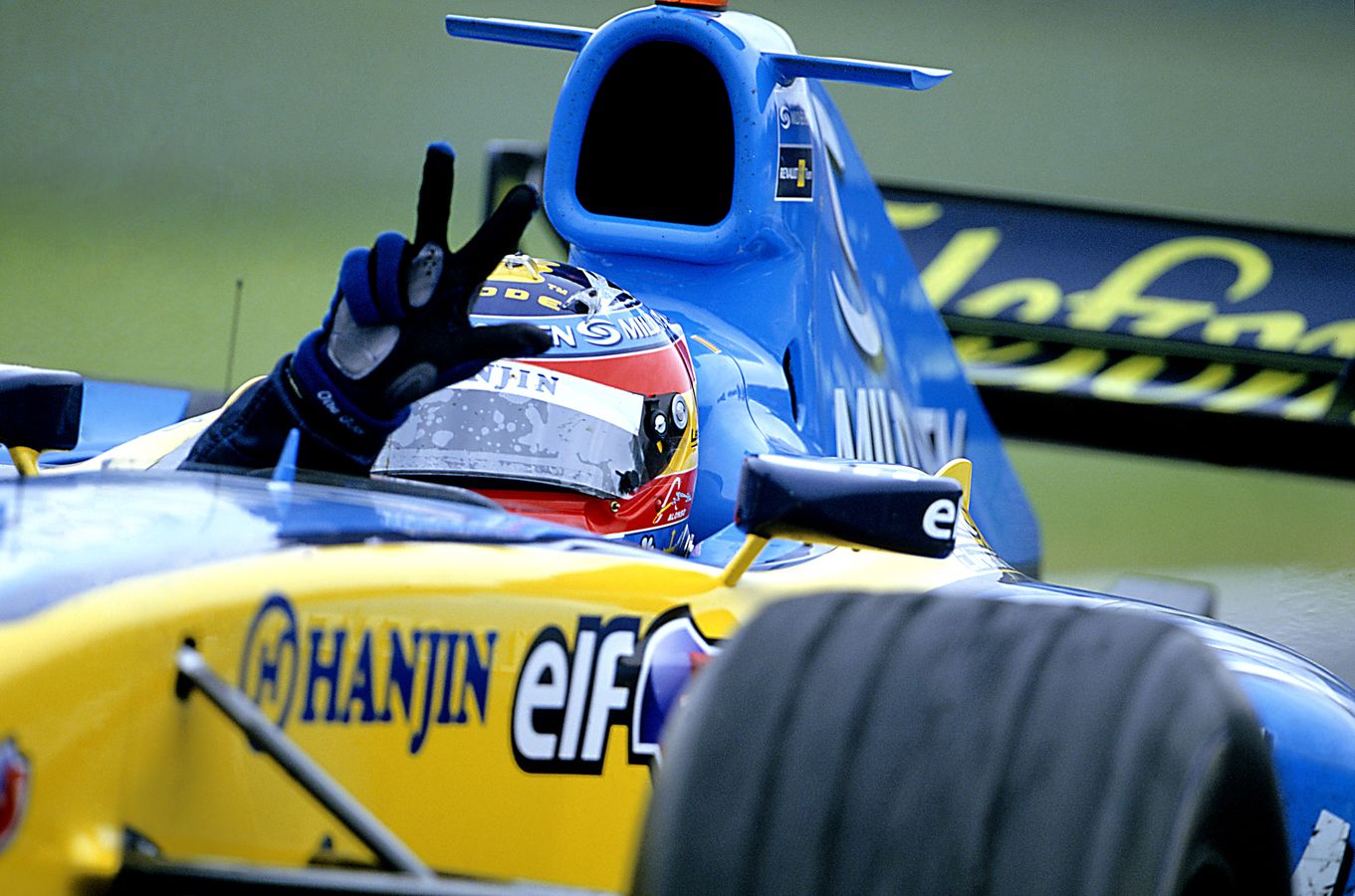 “Fernando Alonso is part of that class of drivers who never give up, who win races they shouldn’t win,” said former Renault engineer Mike Gascoyne. “He is totally focused when there is pressure, he can be instantly quick and also race something undriveable. He is something very special.”

Further wins at the Nürburging (where he chased Kimi Räikkönen down, passing him on the final lap), Magny-Cours and Silverstone put him on course for the world title. Spain, once a country that didn’t televise F1, now hailed their new hero, and Alonso was no longer able to walk down the streets of his homeland without getting mobbed.

Over 2005, he took seven wins, eight more podiums, six poles and two fastest laps to become the youngest driver to ever win the Formula 1 drivers’ world championship. At 24 years, 1 month and 27 days he eclipsed the record the great Emerson Fittipaldi had held for 33 years.

So effortless and rapid was Alonso’s rise to the top that observers predicted he could go on to be one of the greatest drivers the sport had ever known.

“Fernando is young, but he’s now had four years in F1,” said Renault team boss Flavio Briatore. “He realises that the best way to operate in this business is to keep calm, to try and finish the race. The brain is important and he’s very intelligent, very cool. I’ve no doubt that he’s getting the best out of the car at the moment. He’s been fantastic.”

Engineered by Paul ‘Pedals’ Monaghan and Rod Nelson they were full of praise for the man they dubbed ‘Gonzo’ and his brilliant ability to steer around a car’s deficiencies.

“Alonso worries that he drives around problems, but he shouldn’t be too concerned because he can adapt his car over a race distance. You need that quality,” says Monaghan. “At Monza in 2003, he finished with three-quarters of a car [after a start shunt] and still got a point. His ability to adapt to different circuit conditions on new or used tyres makes him a more adaptable and a very competitive driver.”

Heading into 2006, his closest challenger for the world championship was Michael Schumacher, a rival who failed to intimate the Spaniard. That year, the yellow and blue Renault rocket took wins in Bahrain, Melbourne, Spain (an emotional first home win), Great Britain and Canada. In fact, between Turkey 2005 and Canada 2006 he recorded an incredible 15 consecutive podium finishes…

But perhaps one of his best drives in 2006 was a second place finish at the Turkish Grand Prix. On fading tyres, he drove the last stint with Schumacher’s faster Ferrari breathing down his neck. A few races later he pulled out one of the most fearless overtaking moves in the sport – a courageous pass on Schumacher at the entry to the daunting 180mph 130R corner at Suzuka – around the outside. Brave stuff indeed.

But, in 2006, he also faced opposition from what he perceived as excessive outside intervention in his championship battle. Renault’s innovative suspension system was banned, plus he picked up penalties at the Hungaroring and Monza. Despite the mounting political pressure he remained sharp and decisive behind the wheel and took the title down to the wire.

Fernando emerged from the season finale in Brazil on top – a double world champion – and was gracious in victory over his great rival Michael Schumacher, who had earlier announced his plan to retire at the end of the year. 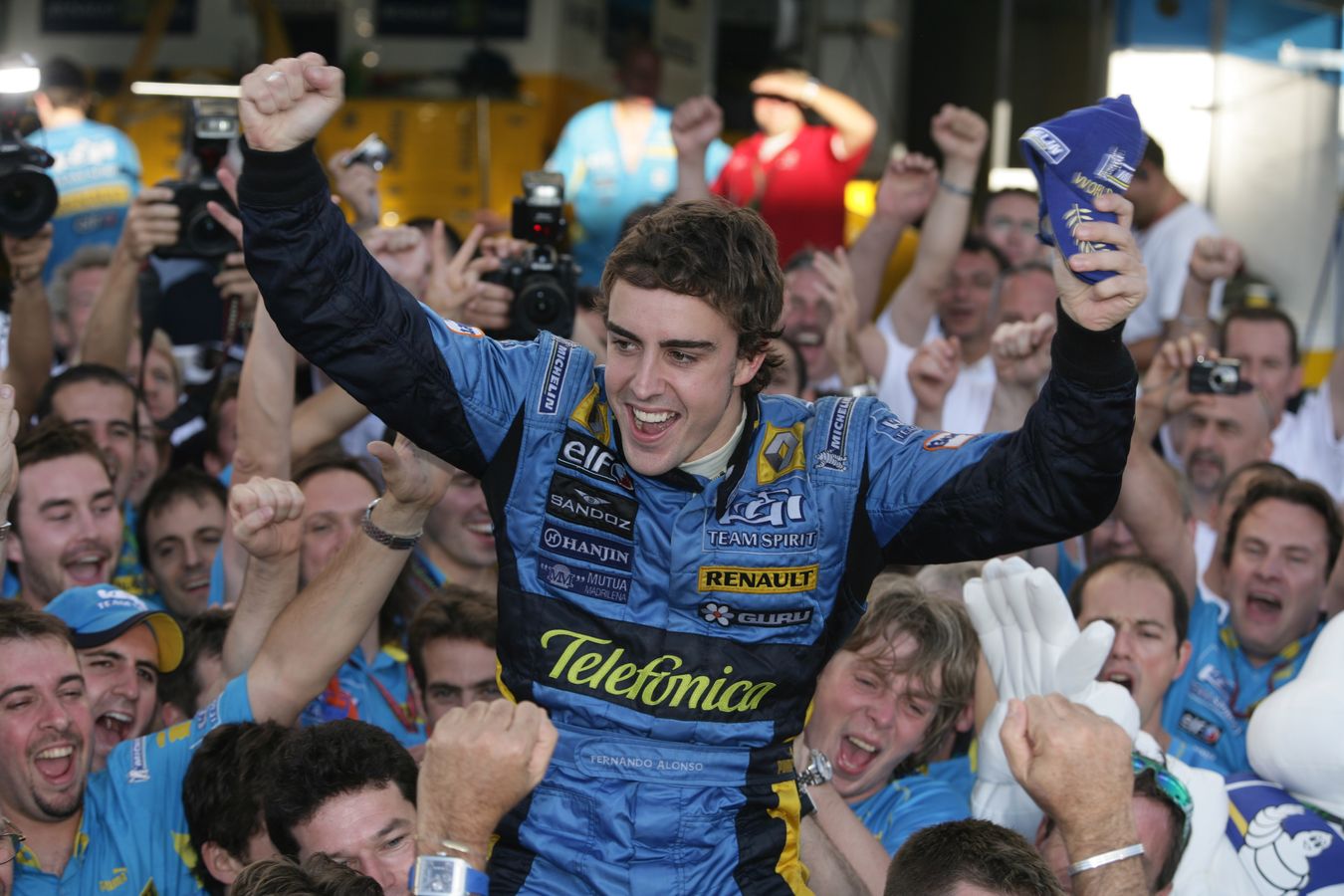 “I am proud to have been racing with Michael and it is an honour to have won the final two championships of his career,” said Alonso after Brazil. “And I think they will mean more than any others I can win in my career. I need some time to let this second championship sink in. I’m 25 years old and after five years with Renault, this is the best way for the relationship to finish.”