After 311 Formula 1 races, you’d be forgiven for thinking the race is finally over for Fernando Alonso.

After all, the Spaniard has driven more grands prix than all except one driver, Rubens Barrichello, who has 322 race starts to his name.

For every grand prix driver, there is life after Formula 1. But all of them adapt differently – some better than others.

Racing isn’t simply an activity; it’s a lifestyle. And Fernando has spent his whole life racing – even as a child.

His journey to and from school was like no other. He created three ‘timing splits’ – a bridge, a sign and a gatepost – along the route and timed himself every morning as he ran through the quiet, shady streets of Oviedo. He had two aims: to improve his sector times and to beat his grandmother, whose job it was to take him to school.

“I had to beat her,” says Fernando. “Every day! That doesn’t make me sound very nice, does it?”

It does make him sound very competitive: but everything is a competition to Fernando. He talks unashamedly about the selfishness required to win in F1. “You need to have no heart,” he says. “You are not enemies with the other drivers, but you have to focus on yourself to win. If you can ‘hurt’ someone by getting an advantage over them, that’s even better.”

Surely, then, it’s this love of competition that explains why Fernando drove for so long, and with such great success, in F1. 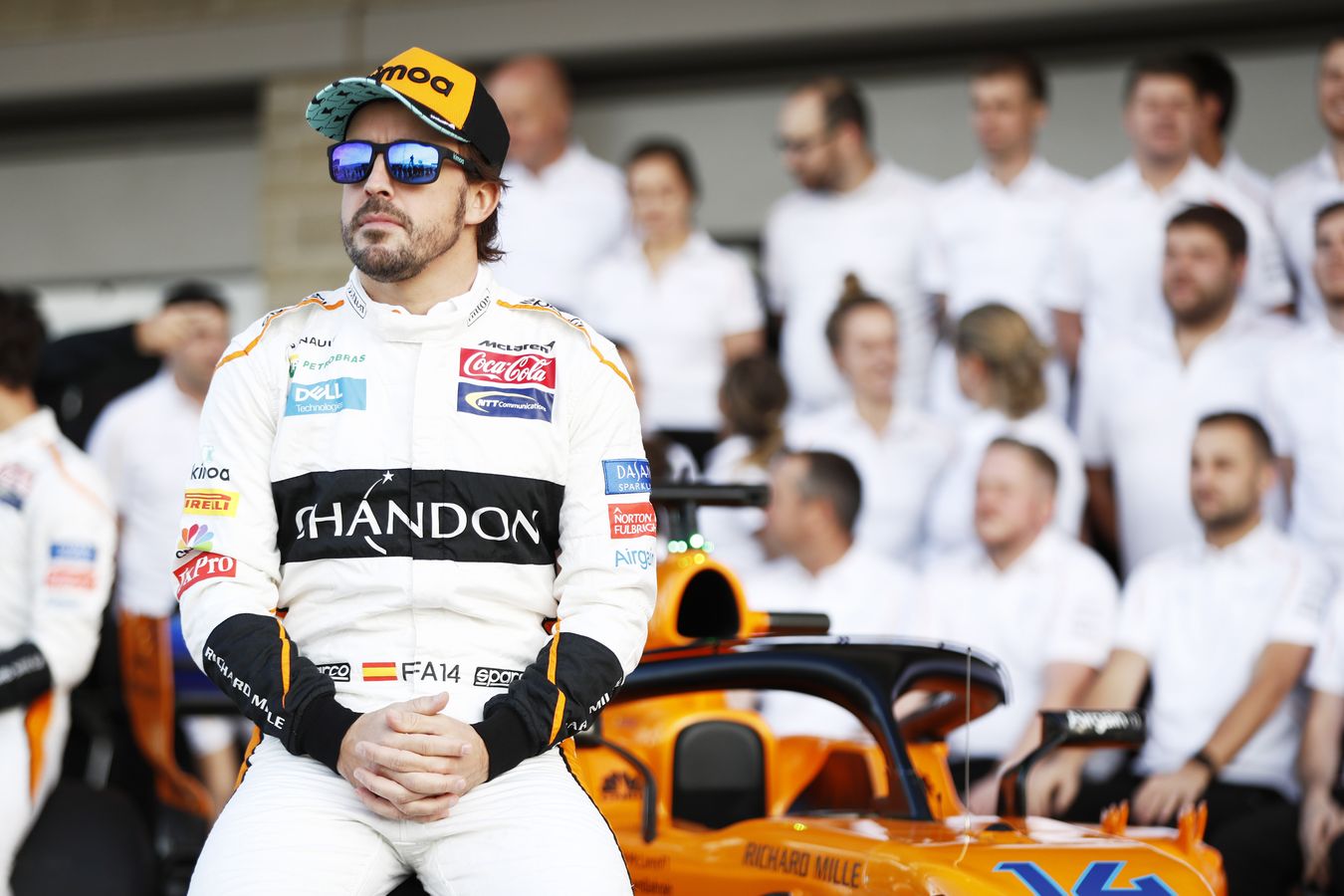 “No, that’s not it,” he says. “I am a competitive person and competition is important in F1, but I don’t race in F1 for the competition. I can get that in other areas of my life, like cycling and playing tennis – or racing my mother to the supermarket. The reason I race in F1 is because the cars give me a feeling that I can’t get anywhere else. It’s unique.”

“It’s hard to explain what this feeling is like,” he says, “because nothing else comes close to F1. Your brain has to re-set every time you get in the car because things happen so fast. If you haven’t driven an F1 car for a few weeks, the level of performance takes you by surprise.

“I go karting to enjoy the competition; I drive in F1 for this feeling. The driving styles in karting and F1 are quite similar, but nothing unexpected happens in a go-kart. Your brain is never taken by surprise. You can predict everything that the kart is going to do. That isn’t the case in F1, where you’re taken by surprise all the time. When you hit the brakes, your brain takes 0.2s to catch up. That’s a very nice feeling; that is the feeling.”

If Formula 1 proved so fulfilling for so long, there was nonetheless a desire to scratch the itch elsewhere. First, by taking part in the Indy 500, which he contested for McLaren in 2017, and to which he will return, again for McLaren, in 2019. 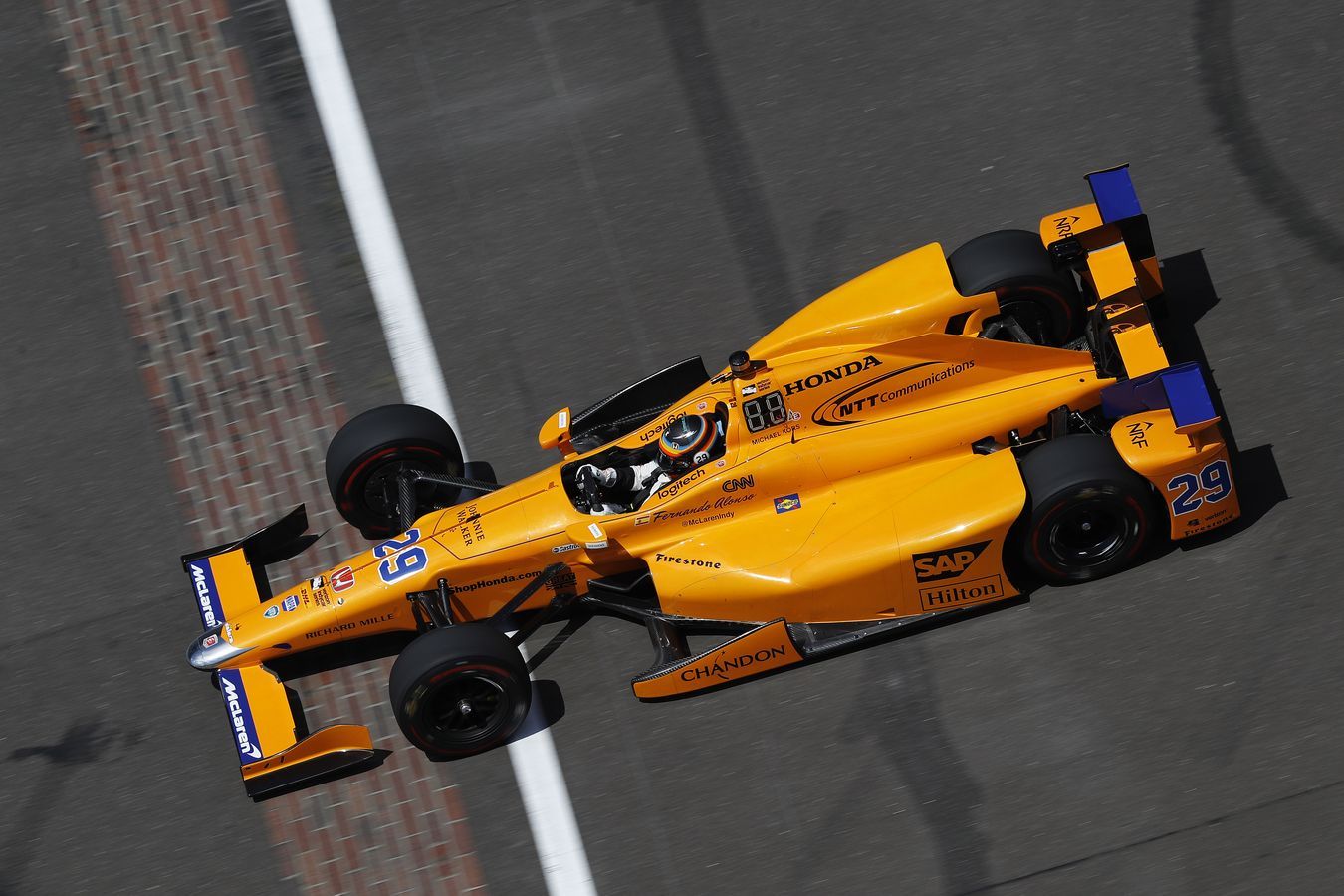 For 2018, he took on a dual campaign, balancing F1 duties with a full-time role in the World Endurance Championship, driving for Toyota. If his warmth for Formula 1 is reflected in his appreciation for the cars, it was the opportunity to get lost in a new environment, and to ultimately race for victory, that drew him elsewhere.

At the same time, he began to formulate an unlikely idea to take on motorsport’s ‘triple crown’ – victory in the three biggest races in the world: the Monaco Grand Prix, the Indy 500 and the Le Mans 24 Hours. If he succeeds, he will become only the second driver – after Graham Hill – to achieve it, a mighty accomplishment.

With two boxes ticked, he doubles down on his Indy challenge, safe in the knowledge that he has both the speed and, after 2017, the experience to successfully tackle the month-long event.

It’s that relentlessness – the ability to focus on a target and mentally deconstruct it and tackle it successfully – that has doubtless contributed to his longevity in the cockpit.

“Fernando extracts the maximum from everything around him,” says his former race engineer Mark Temple, who first looked after the Spaniard when he rejoined McLaren in 2015.

“He drives it in a very aggressive manner. He really attacks the braking areas and throws the car into the corners, but he doesn’t lose out on corner exit. Often, if a driver’s aggressive on entry he loses out on exit, but Fernando manages to keep the car on the limit in both areas.” 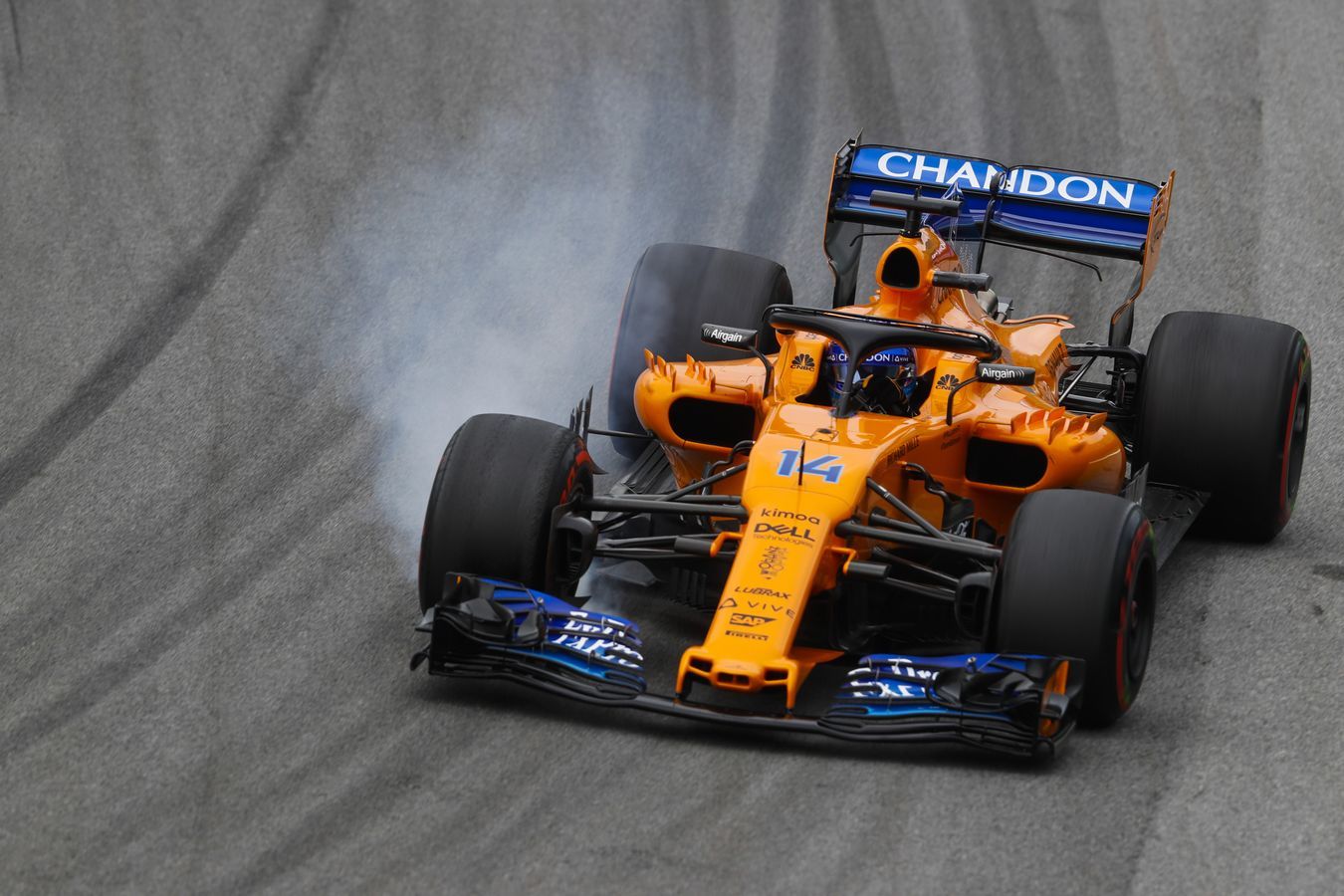 This ability to keep the car on the edge of adhesion sheds light on Alonso’s incredible feel for grip, which sets him apart from most of his rivals, and it’s also the source of ‘the feeling’ that he craves behind the wheel.

That’s most clearly evidenced on his qualifying laps and on the first laps of the race, when he’s able to briefly push beyond the natural capacities of his car, and the abilities of those around him, to find himself in positions that flatter the machinery beneath him.

He rides the limit of an F1 car’s capabilities for so long that he experiences the feeling of euphoria for prolonged periods. That is what makes F1 worthwhile for Fernando – and it comes naturally to him.

“I’ve never needed to prepare myself mentally before getting in the car,” he says. “I’m ready all the time; I don’t need to psyche myself up. My mentality doesn’t change, whether it’s free practice, qualifying or the race.”

Before the start of a race Alonso is often seen relaxing with his engineers, while other drivers are meditating alone, listening to music or searching for the mental stimuli they need to perform when the lights go out. 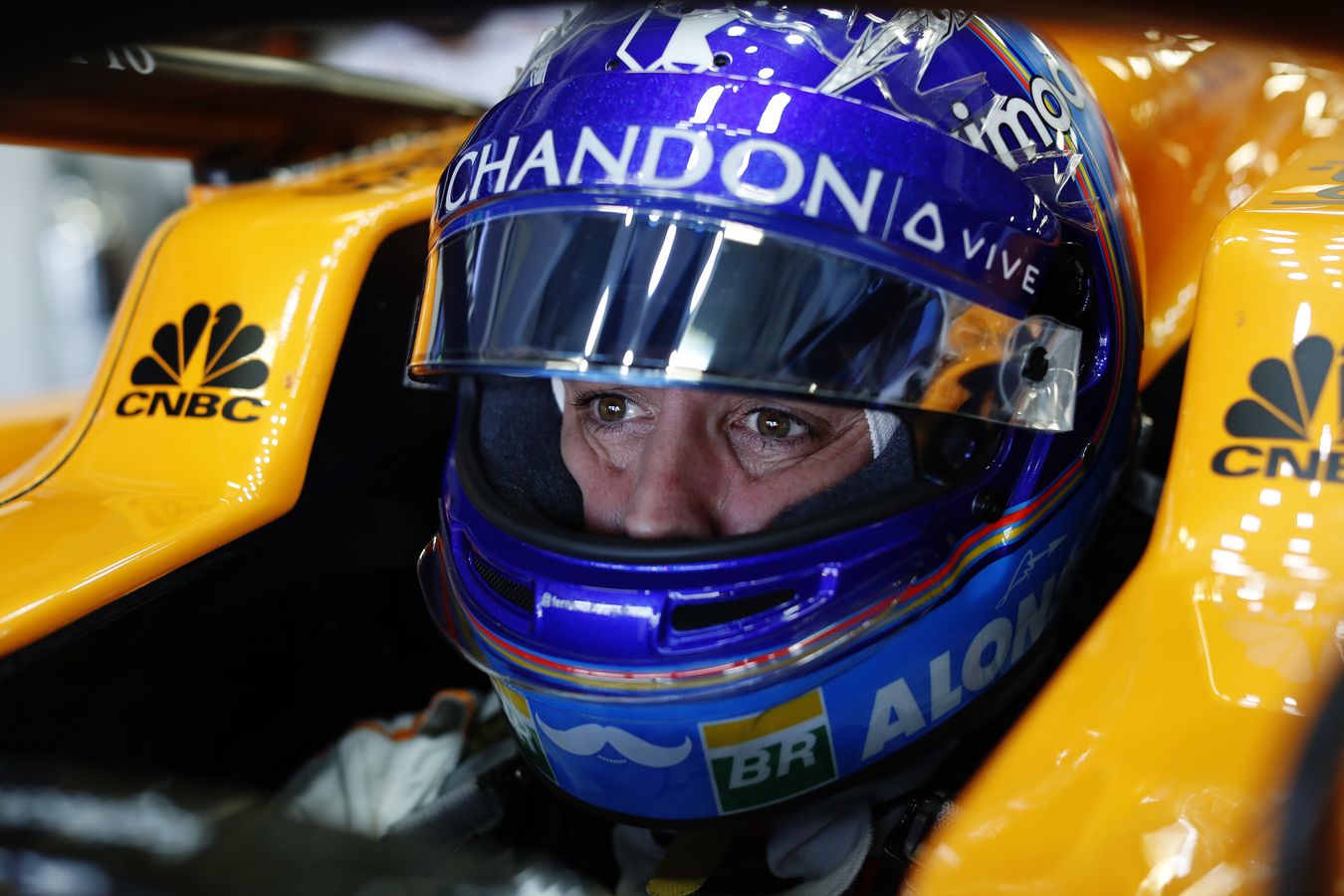 Such an unemotional approach to driving is at odds with Alonso’s love of the feeling he gets on the limit in F1. But there are many sides to his character; a more calculating side has always tempered his passion. Add a razor-sharp intellect to the mix and you have one of the most complete drivers in the history of the sport.

“He’s the most intelligent driver I’ve worked with,” says Mark Temple. “Combine this intelligence with a supreme level of natural talent and you’re left with a very potent combination. It allows him to do so much else while driving the car. He processes a lot of data and he’s always thinking about strategy.”

Witness his performance in Baku in 2018.

After being hit by another driver in a move which punctured two tyres and left his car with heavy bodywork damage, most drivers would have elected to park it. Fernando wrestled his wrecked machine back to the pits, the tyres so destroyed that he was barely able to steer the thing, knocking it into the pit-wall as he attempted to keep it pointed straight.

With a new nose and fresh tyres, Fernando attacked the circuit with typical verve, eventually finishing an astonishing seventh. Afterwards, he unflashily declared his performance one of the best of his life, even if the result didn’t necessarily reflect his efforts.

While most drivers have to focus exclusively on their driving, Alonso has the spare mental capacity to think about a myriad of other problems at the same time.

Perhaps that partly explains the decision to finally forego Formula 1 and seek out new challenges.

Whatever he does and wherever he goes, rest assured that Fernando will always remain a racer…

How 'Fernando Alonso' are you?

Find out if you think like our super Spaniard