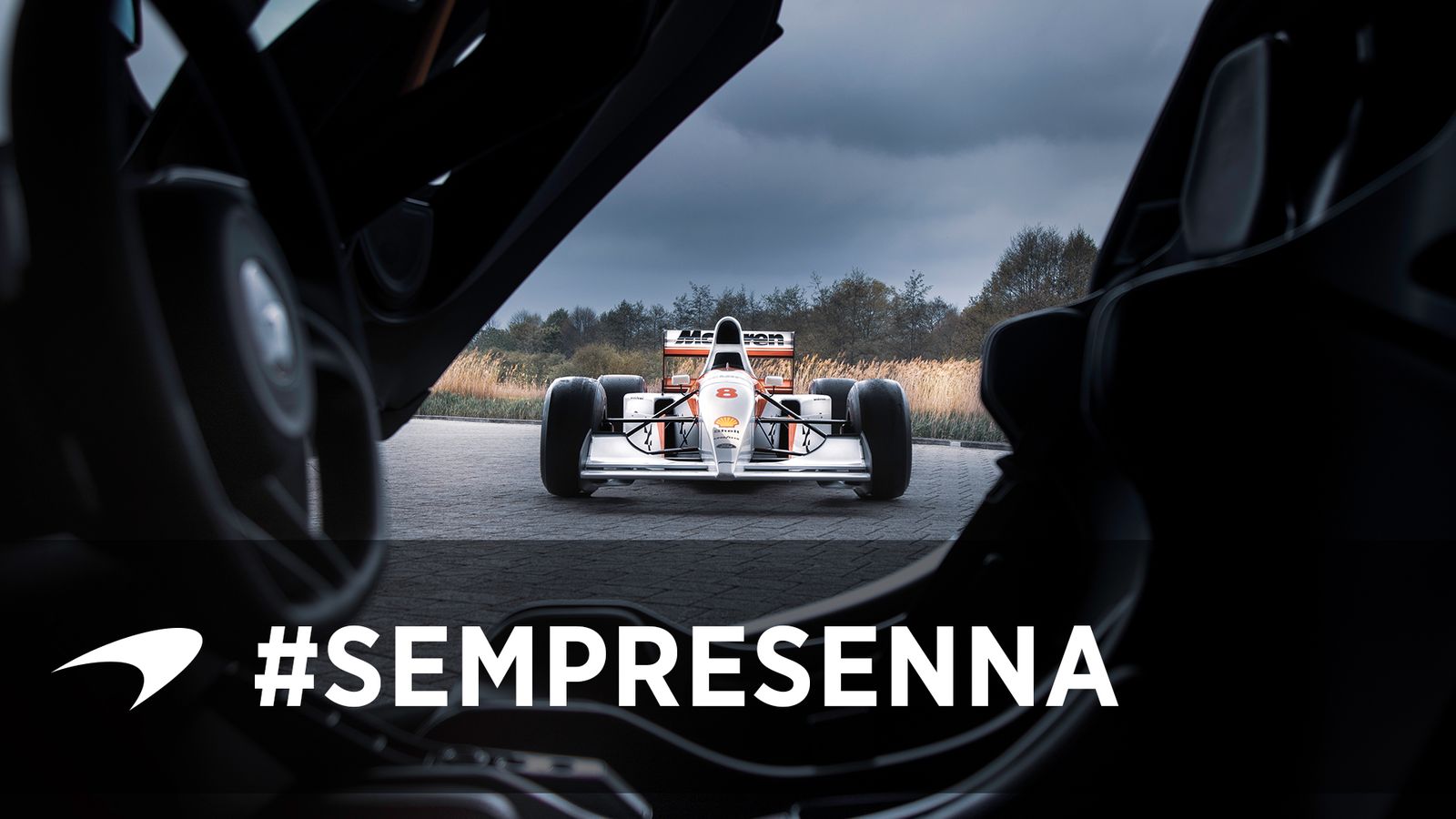 Gary Wheeler was Ayrton Senna's no.2 mechanic during his time at McLaren.

On the 25th anniversary of his untimely death, we sat down with Gary to reflect on his memories with friend and colleague, Ayrton Senna.

What’s your role at McLaren and how long have you been at the company?

This year marks my 35th at McLaren! I work in the Heritage department, and have done for the past two years, working on the cars we raced in the 80s and 90s.

What exactly does that involve? They don’t go racing anymore do they?

No, company policy! But we do demonstrations at Goodwood and shows around the world. We maintain the cars to make sure they still start and run just as well as they did when they raced in the heat of competition. We keep them alive.

Gary stands alongside the MP4/8 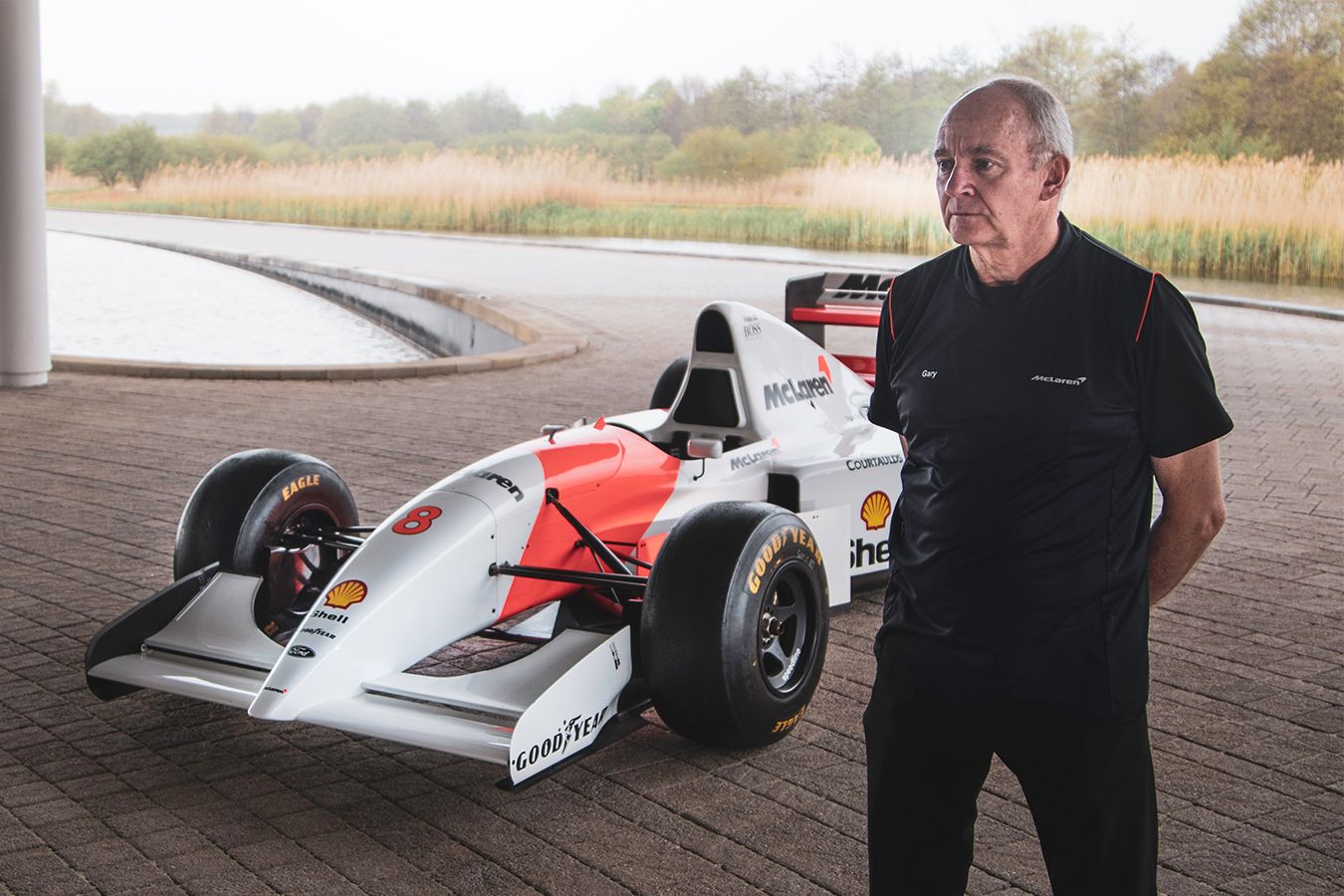 Gary stands alongside the MP4/8

What was your first job at McLaren?

I have a racing background as my father used to work in the industry, but McLaren wasn’t my first Formula 1 team actually. My first team was with Emerson Fittipaldi in 1981 at the team he owned, and that’s where I met Ayrton. Our driver was Brazilian, Chico Serra, and Ayrton had just come over to England so Chico used to bring him into the workshop. We got to know him quite well, before anyone else did really.

Emerson’s team folded at the end of that year, and eventually I heard that McLaren were looking for another mechanic on the T car (the spare car) and I ended up being that mechanic for two years. That was 1984, so I was at McLaren and Ayrton was at Toleman. We used to see one another in the paddock.

So when did you reunite at McLaren?

How I got to be a mechanic on his car is quite an amusing story. We were joking around one day, and I said, ‘Since you keep changing teams and are in great demand, if you ever come to McLaren make sure I’m on your car!’ He said he’d do his best and we laughed it off, and that was it.

Fast forward to 1988, he came to the McLaren factory and was shown around prior to signing his contract for the team. The next day, Dave Ryan who was Team Manager, approached me as I was in the bay working on the car. He said, ‘Gary, what makes you so special?’ And I told him I didn't know what he was talking about. He said, ‘Well, Ayrton was here yesterday. He was just about to put pen to paper on his contract and suddenly had one last request: ‘Can Gary work on my car please?’.

Ron and Dave looked at each other and stated that they decide who works on the cars, but lo and behold, I was on the car! The no.2 mechanic.

I got on very well with Ayrton, we all did. He kept the same mechanics the whole six years – all the championships, wins, pole positions. I always strapped him in the car. I was very lucky to meet Ayrton, very fortunate to work on his car. I appreciated every moment with him and we got on very well. He was a committed driver, and we were very committed to him.

As you mentioned, he was known to be very committed, passionate and dedicated. Did you see that working with him?

Yes. There was something very spiritual about him. We were with him the whole time he was at McLaren, and there wasn’t a lot we wouldn’t have done for him. You knew whatever you did, it was worth it. He was a natural leader. A top man. If he was still here today, I would make sure I was on his car.

The team pose with the MP4/8, with Gary on the second to left 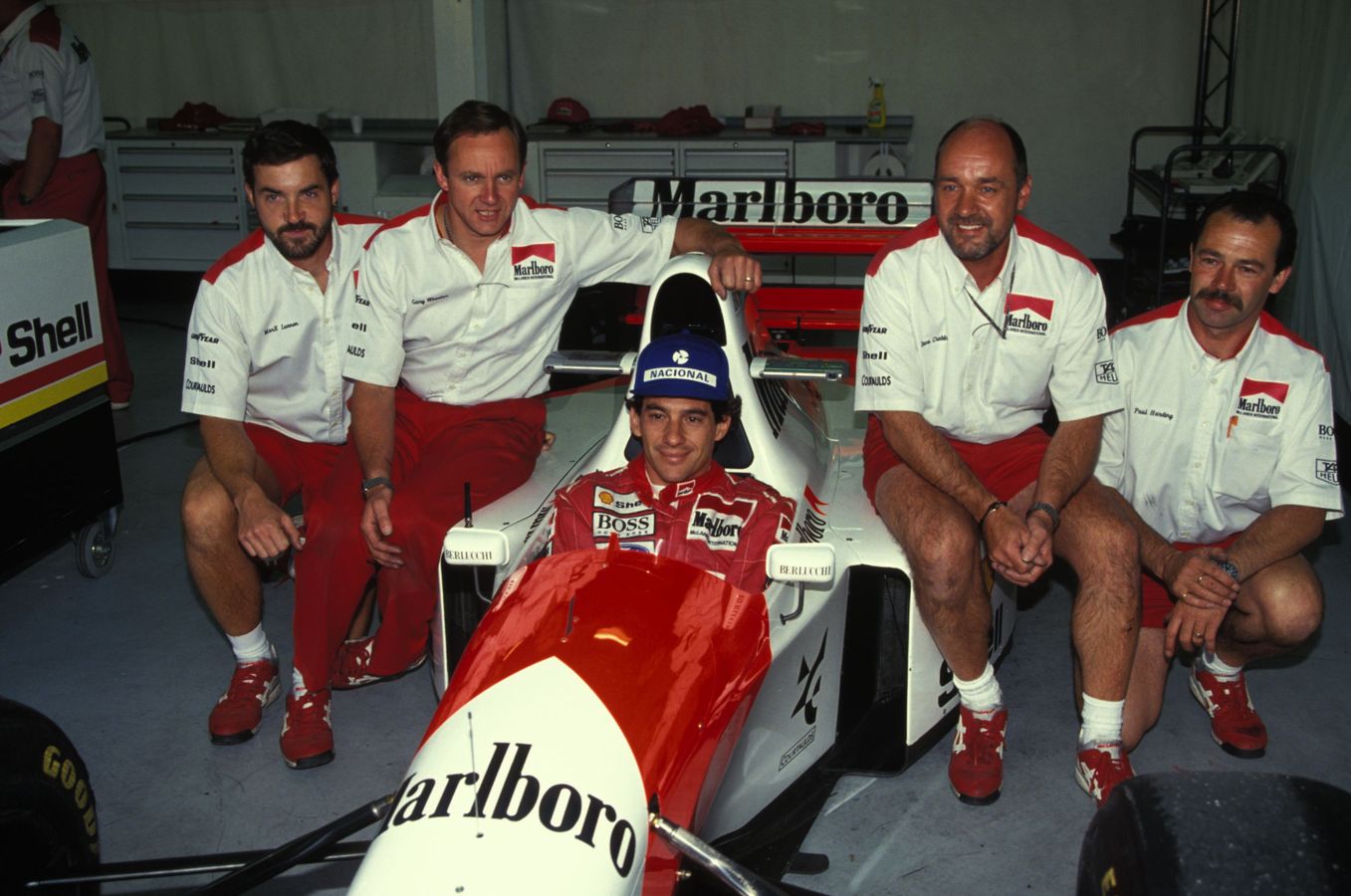 The team pose with the MP4/8, with Gary on the second to left

He was fiercely competitive, but he did mellow after his second World Championship. When Gerhard Berger came into the team he relaxed more, Gerhard taught him it wasn’t just about being totally focused on racing, you can enjoy life as well. Lots of pranks too! They got on very well, a nice atmosphere.

You were with Ayrton and the team throughout so many memorable moments, like his qualifying lap at Monaco in 1988, and the legendary win at Donington ’93.

To this day, I’ve never known anybody to pick up a grand prix car and drive it as quick as Ayrton. I remember talking to Ayrton about how fast people drive on the roads in Brazil, and he said yes, in Brazil you don’t drive, you fly!

It was perfectly natural for Ayrton. I’ve never seen anybody give full lock and change gear with the wrong hand halfway through the corner! When I saw footage of that, no one could believe it.

There were a lot of moments that stand out to me, especially in his last year with the team. Like Donington ’93. Or when I strapped him into a McLaren car for the last time for the Australian GP in ’93. He went out and won… you couldn’t have got a more fitting ending than him winning his last race with us. That was quite emotional. I remember Tina Turner was playing a concert after the race, and he came up on stage and she sang ‘Simply the Best’ to him. He was, simply the best.

When we raced at Monaco with the MP4/8, Ayrton had the chance to beat Mr Monaco’s (Graham Hill) record. Graham had won five times, and Ayrton had equalled this the year before. On race morning, when we did the half an hour warm up, I saw Betty Hill, Graham’s wife looking at the car. She looked at me, gave us a thumbs up and said, ‘good luck!’. Which was a very nice thing to say, especially as her son Damon was still racing! This was a chance for Ayrton to beat her late husband’s record and of course he went and did it.

I remember 1990 after the Japanese Grand Prix, we were packing up and preparing the car for Australia. It was starting to get dark, the media had finally disappeared, and Ayrton came into the garage to see how much damage there was to the car and if it was going to be a chassis change. He was waiting to see if anyone said anything, and we went up to him and asked him, ‘Are you happy with the way you clinched that championship?’ and he said, ‘I waited a while year for that’. 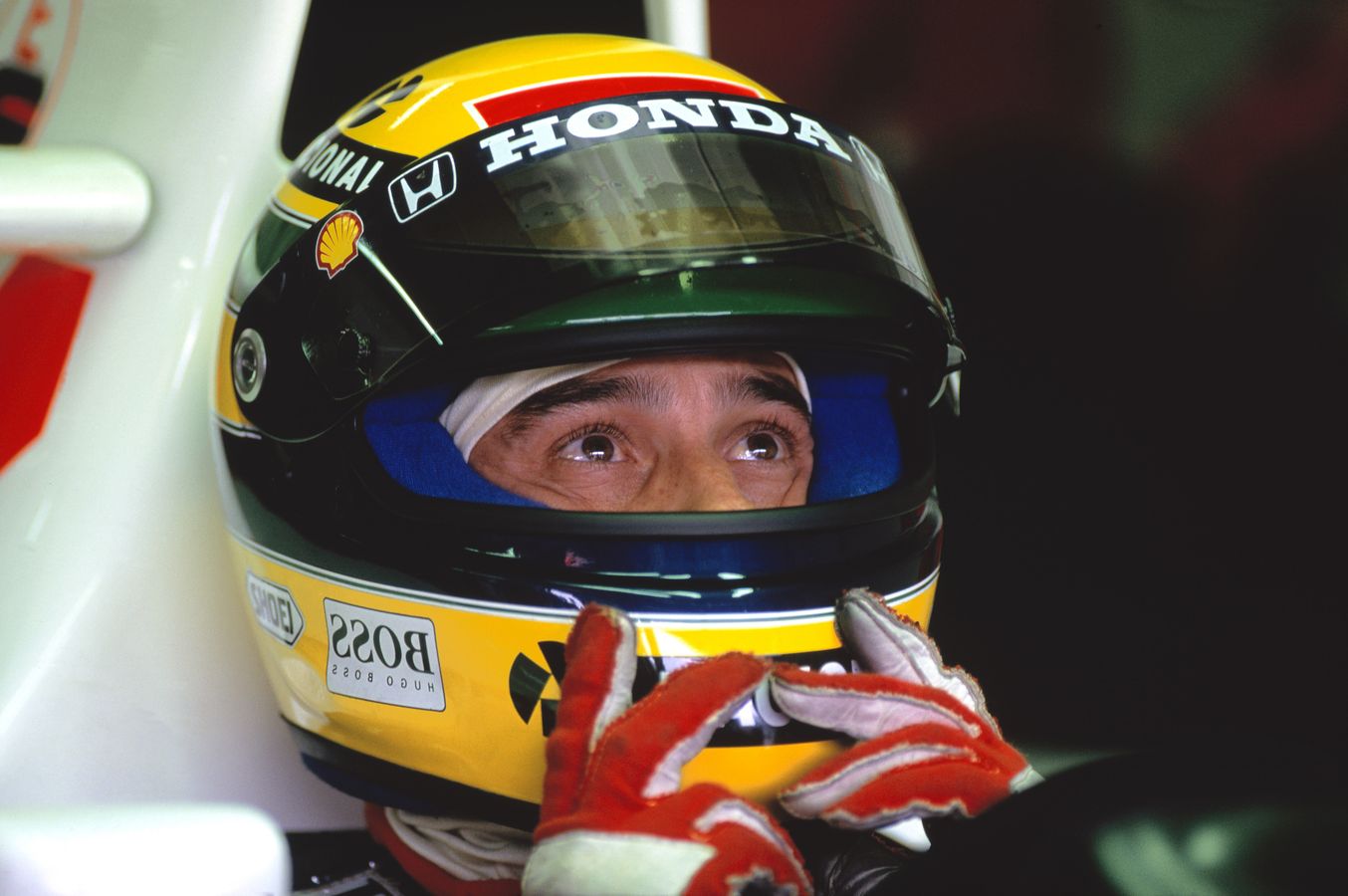 What do you remember from the 1994 San Marino Grand Prix?

We were running Martin Brundle. There had been a start-line shunt, but everyone was okay. We had just got back to the pits, and we heard there was another shunt. We went back to the grid, as you do in your normal routine. We got the blankets on the tyres, the fans on etc . I was unaware it was Ayrton at the time. We were focused on our car and what we could do with it. As I was getting ready to strap Martin back into the car, my colleague leant into the cockpit with me and he said, ‘It’s Ayrton, and he’s had a massive one.’ As soon as he said that, I thought… he’s not going to make it.

On the flight back home, you could have heard a pin drop. Nobody said a word. It was horrendous.

He’s still missed today. There’s hardly a week in this business that goes by where we don’t mention him or think of him.

Do you remember the last conversation you had with him?

I do actually. It was at Aida in Japan. It was the last race before we went to Imola. I was walking back across the paddock to the pit area after practice, and Ayrton was walking by. We were chatting away, and he said, ‘Your car’s not doing very well is it?’ and I responded: ‘No, but it’s doing better than yours!’. He explained how he was fighting the car. I told him that if anyone could beat it into submission, it was him.

We laughed and joked, and that was the last conversation we ever had.

How do you look back on your time with Ayrton and your time at McLaren?

Days like 1 May, 1994 when things happen… one of the guys on our team quit. He said he didn’t want to get close to anyone again and witness that. But those guys know what they’re doing when they get into the sport. I decided to carry on because I love this job and this sport. I’ve always got on with my drivers, I’ve been really lucky. Mika, David… diamond of a bloke. I carried on and we won more races, championships, pole positions. It’s amazing when you and your chums go out and put the car together and it performs. I’ve been very lucky and very fortunate. I appreciated it all.

Forever in our hearts. RIP Ayrton.