The end of an era

The end of an era

Some victories are earned through careful preparation and faultless execution. Others come through sheer grit and perseverance against the odds, and each of our five wins in the 1993 Formula 1 season fall into this category.

Ayrton Senna and Alain Prost – two talents who defined an era in grand prix racing. But as team-mates they were, like oil and water, destined never to mix. While racing together for McLaren in 1988 and ’89, they each won the world championship but – off track – fell out catastrophically. Rivalry turned to rancour.

Alain moved to Ferrari, took a year’s sabbatical in 1992, then returned to F1 in 1993 driving a Williams-Renault package that was formidably competitive. Ayrton remained with us and won the world championship in 1990 and 1991. But when Honda withdrew from the sport at the end of the following year we had to find a new engine partner, but with no such deal immediately in prospect we took the proven option of Ford power. And, since they already had a ‘factory’ team – Benetton – we would simply be customers, using engines one or more development steps behind.

This situation was not to Ayrton’s liking, but our design team excelled themselves even though the identity of the engine supplier was unknown during the early stages of the MP4/8’s development. In bare chassis terms this was a back-to-basics McLaren, as nimble and aero efficient as possible to compensate for the relative lack of power. Under the skin, though, it was the most advanced McLaren ever, deploying cutting-edge active suspension, traction and gearbox controls developed by McLaren Electronic Systems.

The season-opening South African Grand Prix set the template for what was to come: Alain cantering off into the distance in his Williams-Renault while Ayrton led the chase. Nobody else finished on the lead lap. 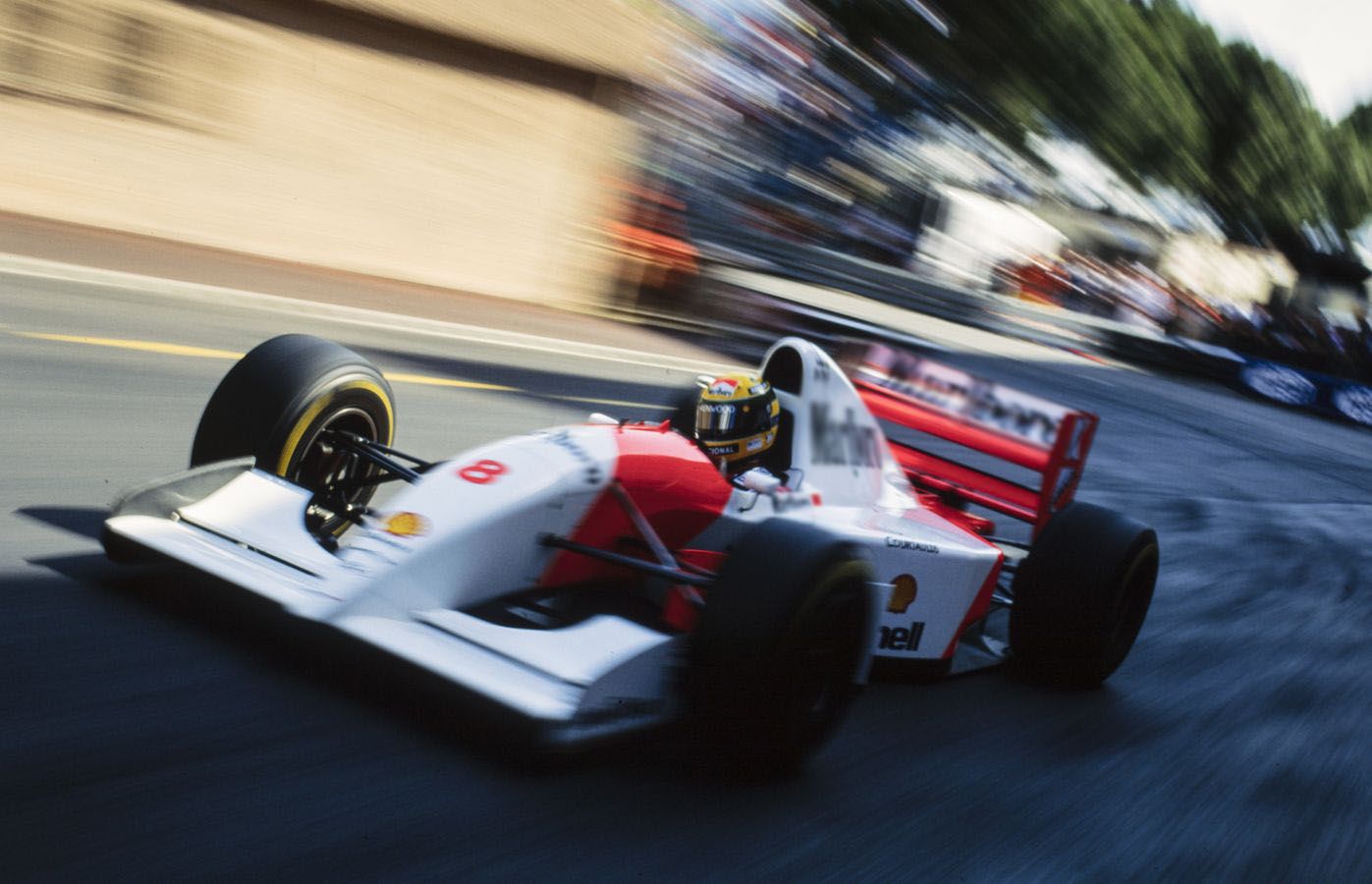 In dry conditions there was little prospect of catching Alain, but Ayrton took every opportunity to put one over on his great rival. Rain at Interlagos and Donington nullified the power difference and, backed up by faultless pitwork, Ayrton inflicted crushing defeats on Alain in both races. He was peerless at Monaco, winning from third on the grid in spite of a bruised thumb – sustained in an accident during practice – but by the end of the season frustration had taken hold and he negotiated a contract to join Williams for the following year.

Alain duly announced his retirement, having clinched the world title with two races to run, and the final rounds of the season felt like an epoch was coming to a close. Fittingly, both grands prix were epic Prost vs Senna duels. Ayrton triumphed in the wet at Suzuka, putting McLaren equal first with Ferrari in terms of all-time grand prix wins. We approached the final race, in Australia, with renewed confidence. Ayrton took pole position on the tight, fiddly Adelaide circuit, and the night before the race he and team principal Ron Dennis discussed the possibility of him remaining with the team for 1994.

Ayrton, though, would not renege on a contract, and started the race knowing it would be his last for McLaren. In spite of the dry conditions he could not be beaten, finishing over nine seconds ahead of Alain, and making McLaren the most successful constructor of all time with 104 wins.

As Ayrton and Alain stood together on the podium for the last time, neither of them could have imagined that this would be Ayrton’s final grand prix victory. Bounding on to the top step, Ayrton made this a moment of public reconciliation, seizing Alain’s hand and slapping him on the back.

Truly an era had come to an end.

Caught on camera: a trip down memory lane around Monte Carlo