The Belgian GP marks the 50th anniversary of Bruce McLaren’s first World Championship win with his own car. In part one, we look at the build-up through that memorable season.

At the start of 1968, the tinny transistor radio perched on the window sill of McLaren’s Colnbrook factory was playing the Beatles’ jaunty number-one single ‘Hello Goodbye’.

For Bruce McLaren Motor Racing Ltd, it was particularly timely: the little outfit, largely made up of hard-working Kiwi immigrants, had only been a grand prix team for two years, but was about to bid farewell to a spell as plucky newcomer, and usher in a new era as a powerful, race-winning Formula 1 constructor.

The mood within that little building nestled in the cul de sac of an industrial park right beneath the Heathrow flight path was typically bullish. Led by Bruce McLaren’s raw charisma, the small band was building a car that would forever change its fortunes…

McLaren’s first two F1 seasons in 1966 and 1967 were all about learning, and one of the lessons of which Bruce took note was that you had to have the right engine package for the new 3-litre formula.

Two years earlier, when McLaren had made its debut at the 1966 Monaco Grand Prix, it had used an Indy-derived Ford engine that proved to be heavy and unreliable. The Italian Serenissima that replaced it later that year was hardly better. Meanwhile, Jack Brabham had shown what could be achieved by winning the World Championship with the solid and reliable Repco V8, while Ferrari also had a superb engine from the off.

McLaren’s options for 1967 were still limited, but he decided to go with the BRM V12. The duly team set to work on designing a new car – to be called the M5A – but it was soon clear that the new engine would not be available for the start of the season. As a stop-gap the team instead created the M4B, a development of its F2 car with a 2.1-litre BRM V8. 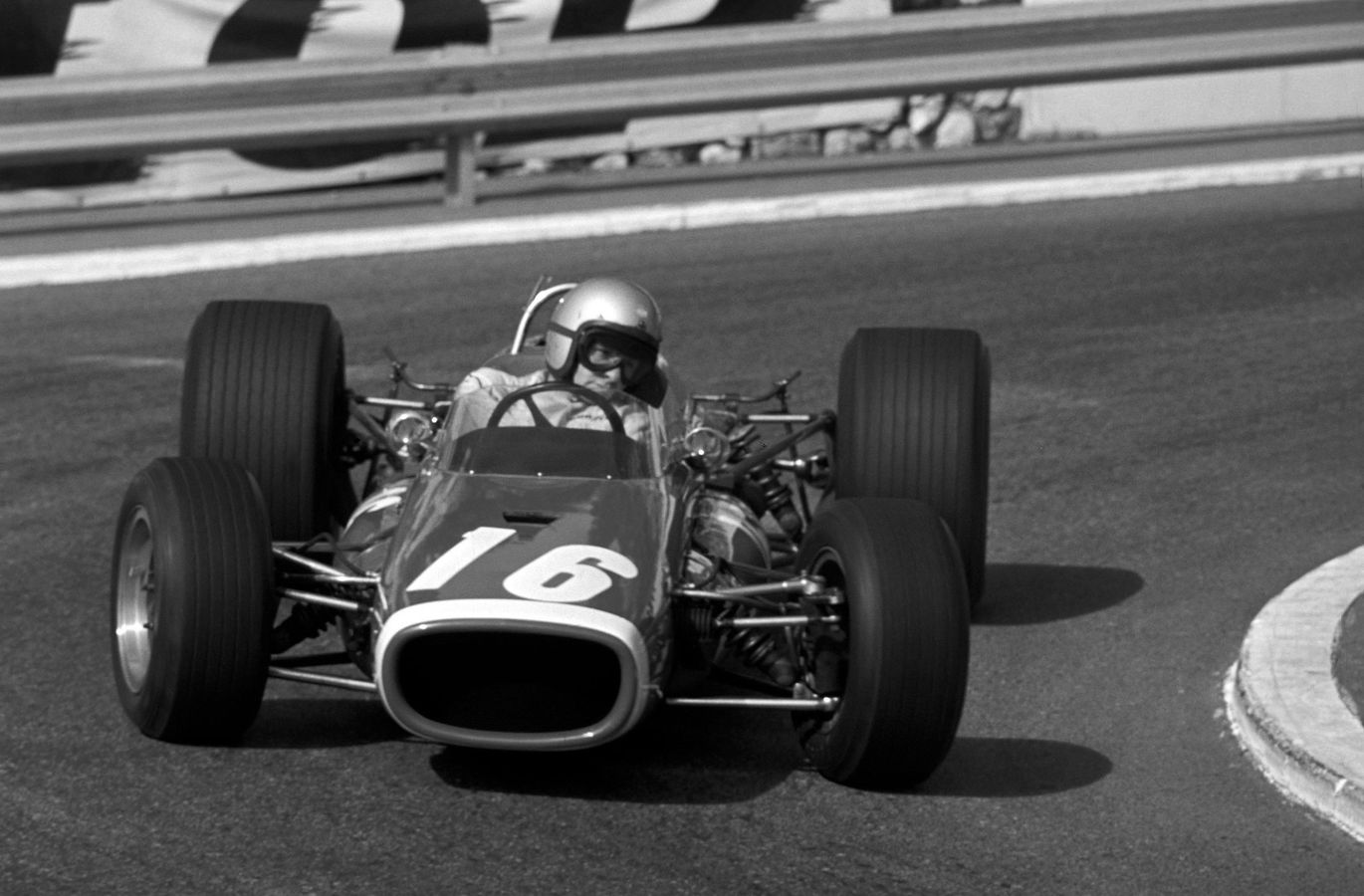 Having missed the opening race in South Africa, Bruce duly drove it in the Race of Champions at Brands Hatch, in Kent, and then the second race of the World Championship season in Monaco, where despite a pit-stop he finished fourth. However next time out in Holland he crashed, and the M4B was badly damaged. After it was repaired it was effectively written off in a fire while testing at Goodwood.

Bruce’s close friend Dan Gurney then invited him to drive a second Eagle-Weslake, and given that the American had won the previous race at Spa, it was an offer he couldn’t refuse. It allowed him to regroup the F1 effort back at base, while still racing himself. He drove three races for Gurney’s All-American Racers team, but all of them ended in mechanical retirements.

By August, the new engine had arrived and was fitted into the M5A chassis, which had been waiting unused since the start of the year. Unlike the upgraded M4B, the car had been designed from the off by Robin Herd as a pukka F1 machine, with no compromises in its systems and layout.

It was a progression from the F2 machine in that it was neat and tidy, and designed with simplicity and ease of maintenance very much in mind.

The M5A was given a brief shakedown at – where else? – Bruce’s favourite test track Goodwood before being shipped to Mosport, Ontario for the Canadian Grand Prix. The team experienced a few niggling problems fitting the engine – which apparently proved to be longer than promised! – and some of the ancillaries proved awkward to package. Indeed the crew made the decision to not fit the alternator in order to save weight. The battery was laid on its side under the driver’s seat, with the oil catch tank located above it. 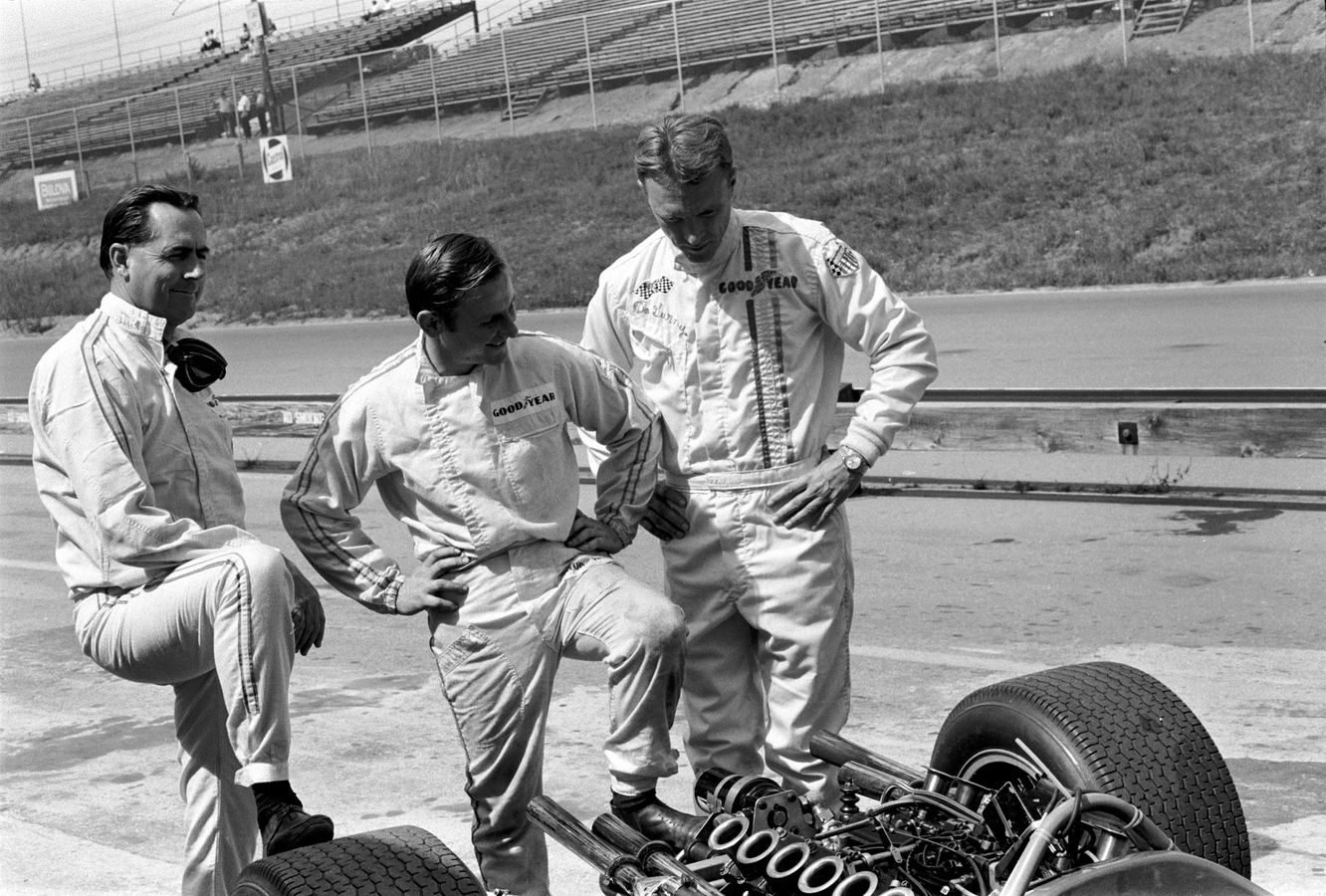 Bruce qualified a promising sixth out of 19 entrants, but in the race the lack of running proved a handicap. He had an early spin in the wet, but he fought back to second place, behind Denny Hulme’s Brabham. Indeed he looked set to catch his fellow Kiwi and take the lead when the new car began to suffer a misfire.

The oil catch tank got too hot and in turn that affected the battery that was underneath, in effect boiling the liquid inside it. During the race the battery became flat, as the lack of an alternator meant it didn’t recharge, thus creating a misfire. Bruce had no choice but to stop and get a new battery, a delay that dropped him to an eventual seventh. The race was won by Jack Brabham, who had been some way behind Bruce when he pitted.

Bruce enjoyed another strong race at Monza, which, without chicanes, was a venue that offered lengthy, thrilling slip-streaming battles, and was challenging the Honda of John Surtees for the lead when he had an engine failure. Then came a trip back to North America and the US Grand Prix at Watkins Glen, where a water pipe breakage stopped the car. In the season finale in Mexico a lack of oil pressure caused McLaren to withdraw before the engine failed.

All of this drama would provide valuable lessons for the fledgling team: and, like all good engineers, the same mistakes would not be made again. The M5A might not have scored points, but it did start to put the McLaren team on the map, giving everyone the confidence that they could get the job done.

Meanwhile the goalposts had moved on the engine front.

Delve deeper into the history of our iconic cars

At the Dutch Grand Prix back in June, Lotus boss Colin Chapman had introduced the Type 49 chassis, and with it the Ford-backed Cosworth DFV. The new V8 was an engineering gem, and Bruce could see that from the start. Jim Clark won on the package’s debut at Zandvoort, and the Scot would score three more victories that year.

The DFV was reserved for the exclusive use of Lotus in 1967, but at the end of the season it was made available to selected customers. Bruce and Ken Tyrrell, who ran a Matra chassis for Jackie Stewart, were at the head of the queue. Thus after all his various failed experiments Bruce was finally able to use his Ford connections to land a supply of DFVs for 1968.

The move was to be a game changer.

The DFV was warmly welcomed by the McLaren design team of Robin Herd and Gordon Coppuck. Now there were to be no more compromises with heavy and/or underpowered engines – the DFV was a racing car designer’s dream; compact, efficient, powerful and reliable.

On the tiny mezzanine floor that served as a design office in the David Road, Colnbrook, factory, they were able to set to work with renewed enthusiasm on what would become the McLaren-Ford M7A.

Meanwhile Bruce was moving to bolster the team in other ways. Keen to have a solid two-car line-up, he tempted newly-crowned World Champion Hulme away from Brabham. Many years later the likes of Michael Schumacher and Fernando Alonso would jump ship to new teams as World Champions – in the latter’s case to McLaren – but, even in 1968, hiring his close friend and fellow New Zealander was something of a coup for Bruce. 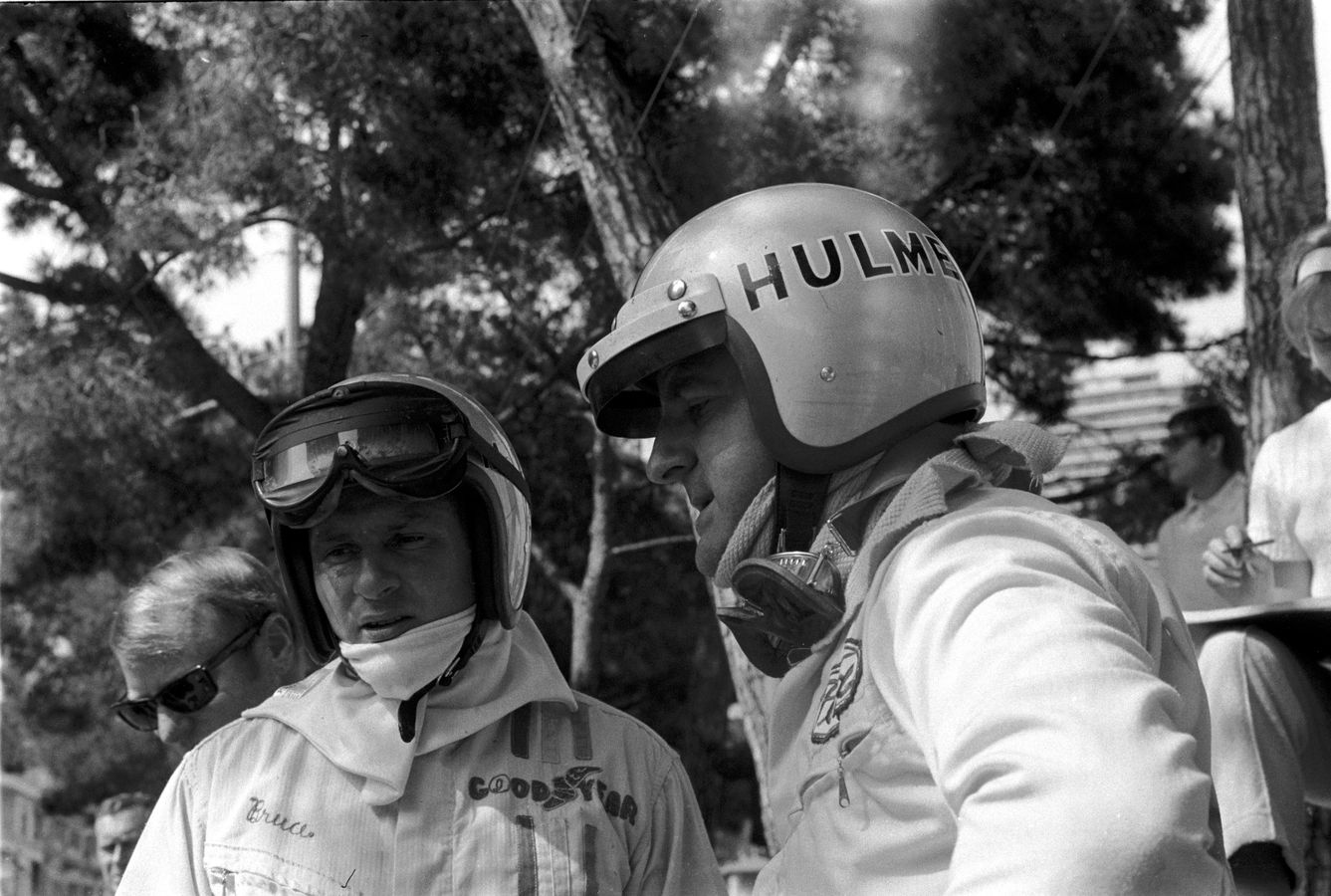 Like the Lotus 49 before it, the new M7A used the DFV as a stressed member, meaning the V8 was structural – it mounted directly off the chassis, and was able to support the rear suspension and gearbox. It was mated to Hewland DG500 unit, making for a reliable and tidy package. The suspension was derived from the M6A Can-Am car, and was typically workmanlike but efficient.

It was drawn by Coppuck, based on geometry by Bruce himself, when Herd left the team after designing the M7A chassis. The up-and-coming former aerospace engineer had been invited to design an F1 car for Cosworth, and his departure was a blow to the team and to Bruce personally.

As a final touch, the new car was painted papaya orange, as Bruce was keen to adopt a new identity for the team. If nothing else, the M7A would stand out on the track among the usual dark green and dark blue British garagiste entries.

Off to a flying start…

The M7A would be the car that really put McLaren on the F1 map in 1968. Not only did Bruce earn his team its first Grand Prix win in Belgium, but Hulme won twice, and challenged for the World Championship until the final race.

Still, it wasn’t ready for the beginning of the season, Bruce himself didn’t start the opening race of the year in South Africa in January, generously sending the single existing M5A for the use of new teammate Hulme. Denny finished an unspectacular fifth.

When the new M7A was unveiled a few weeks late it looked modern and sleek, especially in its papaya colours, and as is so often the case, its performance backed that up.

The car’s racing career started with the pair of non-championship races on home ground in England. In mid-March, Bruce won the Race of Champions at Brands Hatch from pole, and set a new lap record, with Denny taking third. It was a fully representative field, almost as good as a fully fledged Grand Prix, so the signs were positive.

The chequered flag waves as the M7A wins at Brands Hatch 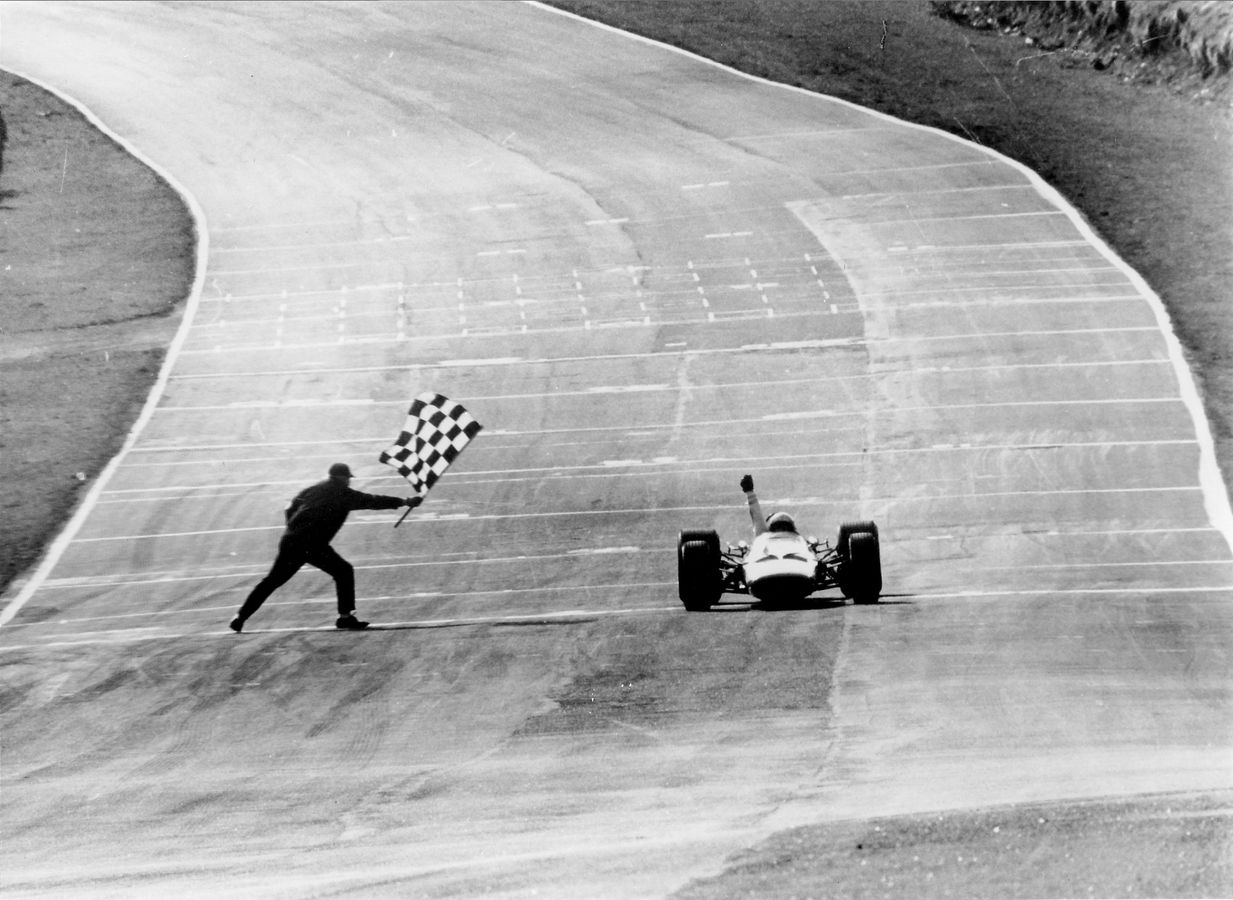 The chequered flag waves as the M7A wins at Brands Hatch

Five weeks later at the International Trophy at Silverstone, Hulme started from pole. Initially Bruce battled for the lead with BRM’s Mike Spence before his new teammate – slowed by a broken goggle lens – joined the fight. Spence then retired and Denny and Bruce went on to score a memorable one-two, with their countryman Amon taking third for Ferrari.

This was a big achievement for the McLaren team: “Finishing first and second in a race is great for any team,” he wrote. “But to do this just before the World Championship season really gets under way is quite a morale booster.”

The M7A had won its first two races, and thus rivals sat up and took note. For the first time the McLaren team was seen as a serious contender.

The car made its World Championship debut at Jarama, Spain, where Denny started third and finished second, while Bruce qualified fourth and retired with an oil leak. The boss also failed to finish in Monaco, where Hulme claimed fifth.

The next race was at Spa in Belgium – where, with a little good fortune on his side, Bruce was to make history.