You never forget your first...

On 12 December 1959 a famous name won a grand prix for the first time when Bruce McLaren crossed the line at Sebring to take victory at the United States Grand Prix for the Cooper team.

In so doing, the New Zealander established a new record as the youngest grand prix winner, at the age of 22 years and 104 days. Remarkably, it was to stand for over four decades, until finally beaten by Fernando Alonso in 2003. In subsequent years, only Sebastian Vettel and Max Verstappen have beaten Bruce’s mark, underlining what a special achievement it was.

And yet, things could have been so very different, as Bruce was originally not even supposed to contest the race that would earn him a place in the history books...

After finding success as a teenager in his home country, Bruce travelled to Europe at the start of 1958. He quickly proved to be a star with the works Cooper F2 team, even finishing fifth overall with the smaller class car at that year’s German Grand Prix.

For 1959 he was promoted to the Cooper F1 team alongside his mentor Jack Brabham and American Masten Gregory. The young Bruce was very much the pupil, and he proved to be a fast learner, logging two fifth places and a third in his first three outings. However, his efforts were thwarted in the next three races – all brought to an end by mechanical retirements.

The Italian Grand Prix was supposed to be the end of his season because team boss John Cooper planned to take only two works cars to the series finale in the US. And naturally, local star Gregory, who had more experience, was given the nod to partner Brabham at Sebring – a notoriously bumpy venue known to many of the F1 drivers through the famous 12 hours sportscar race, which had been established in 1952.

The race had gained special significance as it saw a three-way battle for the title. Brabham arrived, leading on 31 points, while Stirling Moss – who drove Rob Walker’s private Cooper – was his closest challenger on 25.5 points. The third man in with a shout was Ferrari’s Tony Brooks, on 23.

At the time the scoring system was 8-6-4-3-2-1, with an extra point for fastest lap carrying more weight than it does today, and potentially deciding the title. All Brabham had to do was finish second to put the title out of reach from his rivals.

Although he wasn’t supposed to race at Sebring, Bruce travelled to the US anyway, as it was a useful stop on his way home to New Zealand for the winter. In turned out to be a good decision.

Gregory had been injured in a sportscar crash at Silverstone in September, and while the bespectacled American hoped to be fit to compete, the Sebring doctors decreed that he wasn’t – so Bruce stepped in. 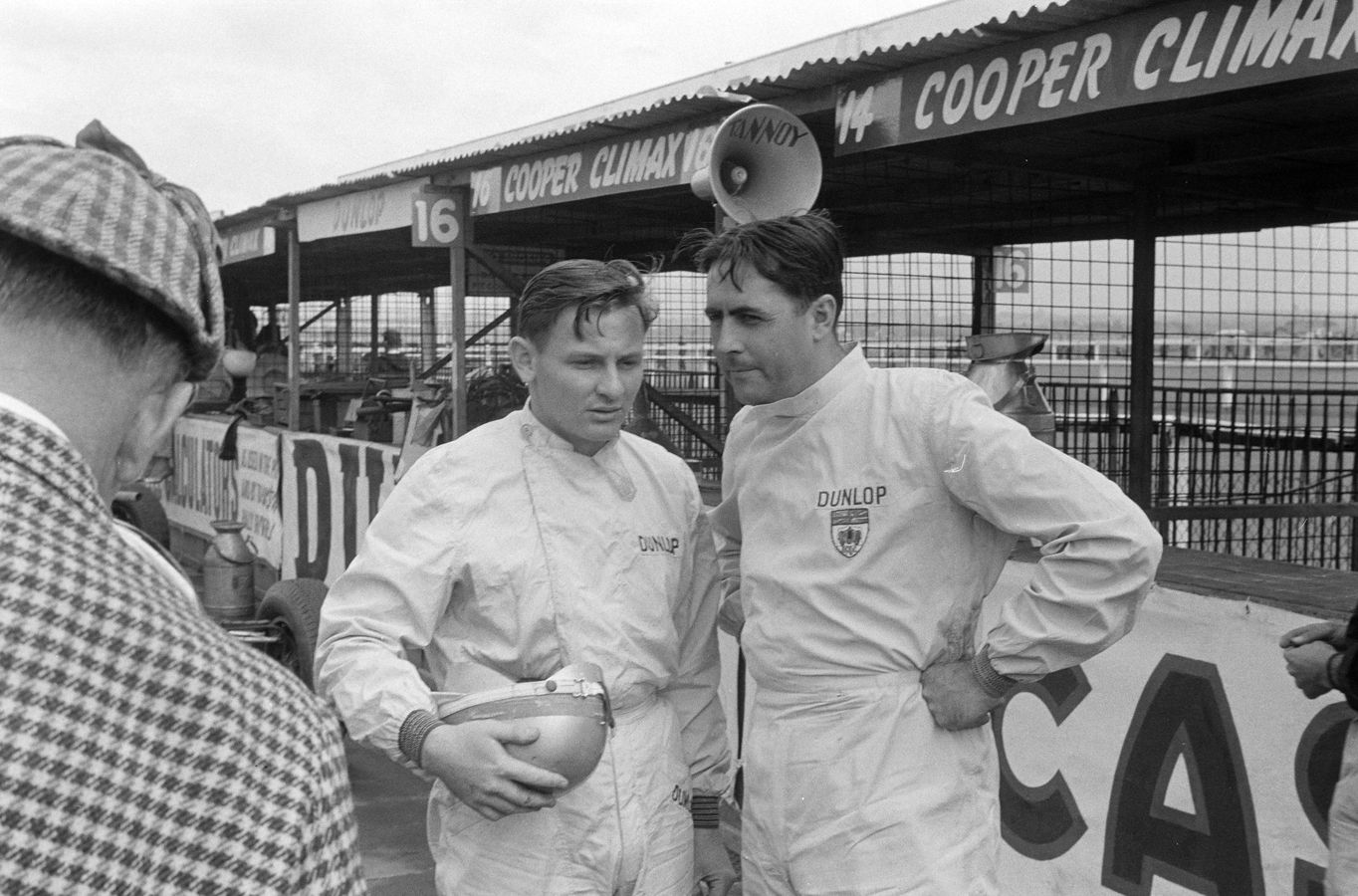 On the other side of the garage, Brabham’s title hopes were dealt a blow in a race at Nassau the previous weekend. A stone shattered his goggles and broken glass left him with a nasty eye injury. However, he was still able to drive.

The weekend didn’t get off to a good start for the Cooper team, and in practice Bruce suffered both engine and gearbox problems. He found himself consigned to a lowly 10th on the grid after qualifying, not helped by a chassis that was twisted following an incident with Gregory at the wheel in a previous round.

Moss took pole, while Brabham, who had a crash into straw bales, qualified alongside him on the front row. Title outsider Brooks was on the second row, in fourth place.

“When the flag fell I made my best-ever start,” Bruce recalled in his 1964 book From The Cockpit. “The car left the fourth row like a rocket and at the first corner I went in side-by-side with Moss.

“Discretion being the better part of valour, I let Stirling through and followed him closely, with Jack snapping at my exhaust. Going into the next hairpin I moved across to let Jack through onto Stirling’s tail.”

Bruce was happy to settle into third place and leave Brabham and Moss to fight it out for the win and the title, but the complexion of the championship battle dramatically changed when Moss retired with a gearbox problem on the fifth lap. Suddenly, the works Cooper team looked set for a superb one-two finish, more than enough to clinch the title for Brabham.

Bruce recalled: “Stirling had opened up a gap on Jack, who had drawn away from me. Then Stirling was standing at the side of the track, looking disconsolately at the broken Cooper. Another World Championship had eluded him.

“So Jack’s championship was now in the bag and, with the pair of us out in the lead, Jack gave me a thumbs-up wave and we settled down to some careful but quick motoring. This was one of the first of a series of occasions when I was able to follow Jack.” 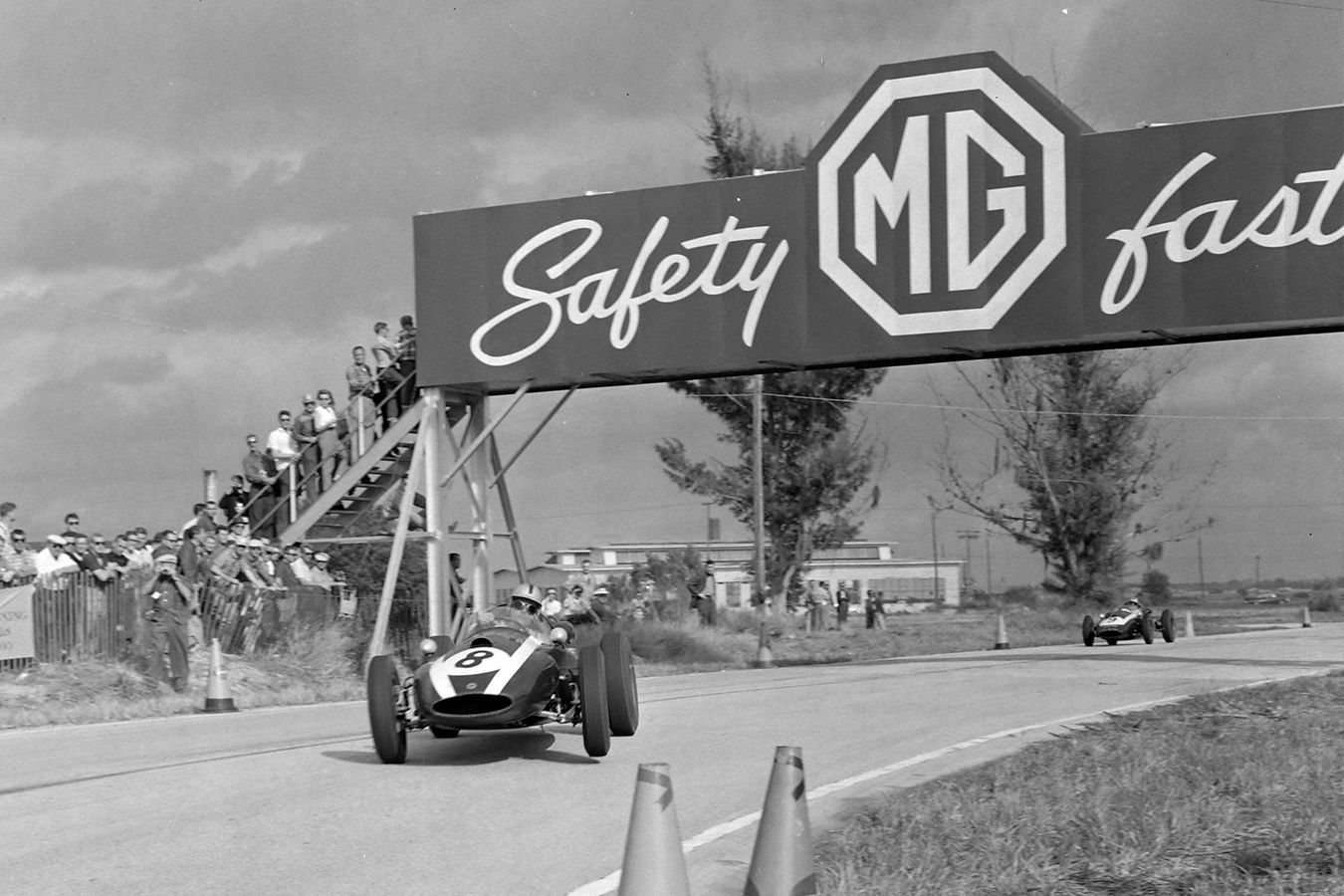 However, with a few laps to go, Brabham’s pace began to drop off, and knowing that he was being caught by Maurice Trintignant – team mate to Moss in the second Rob Walker Cooper – Bruce began to worry.

“With a few laps to go we were making a comfortable pace,” Bruce wrote. “When John [Cooper] started to point anxiously at the signal board giving the time to ‘Trint,’ who was only about 12 seconds behind.

“With each lap the gap dropped by about a second and I was making signals at Jack. I couldn’t have gone much faster, but if Jack had slightly increased his speed, he could have towed me along.”

What Bruce didn’t know at the time, was that the always cautious Brabham was saving his car and conserving fuel – but he was about to run out of the latter.

“With two laps to go and the gap to ‘Trint’ down to about six seconds, Jack slowed and pulled to one side, waving me by,” Bruce wrote. “I was staggered and looked across at him in utter dismay. I’d slowed right down myself, so picked second gear thinking that as ‘Trint’ wasn’t too far away, I’d better get on with it.”

Brabham shed more light on what happened in his autobiography, When the Flag Drops: “I was about a mile from the finishing line when the car started to run on two cylinders,” the Australian wrote. “I was shocked. I just couldn’t believe it. I automatically put the gear-lever into neutral as the engine went dead. I was out of fuel!

“I coasted on down to the second last corner, where Bruce came alongside me, almost stopping. My reactions were quick, and to the point. With much arm-waving and shouting, I told Bruce to get going. Bruce was horrified. He just couldn’t work out was wrong and had vague ideas of stopping to help me! Luckily, he got the message quickly, and pressed on.”

As Trintignant flew passed him, Brabham coasted to a stop, climbed out, and started to push his car towards the flag. Bruce meanwhile, kept his foot down, crossing the line less than a second clear of Trintignant to score a memorable first win at the tender age of 22.

“It was staggering,” Bruce wrote. “I couldn’t believe it. I was amazed, excited, and the victory lap after taking the flag must have been one of the most pleasant I have ever done. I stopped at the pits and was mobbed by pressmen and photographers, while Jack slowly pushed his car across the line to a heroic finish, nearly collapsing in the heat.” 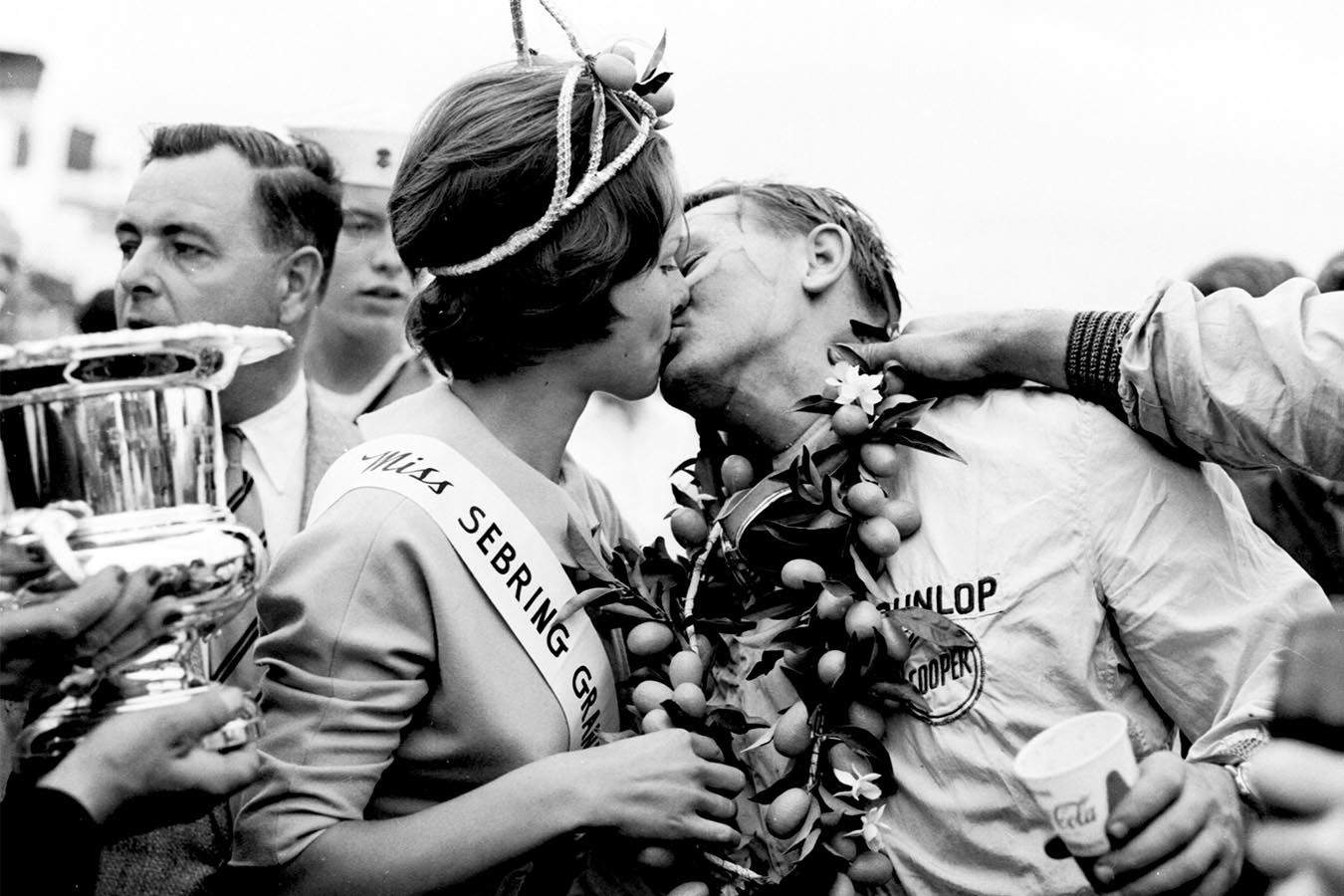 Brabham’s determined efforts were not in vain. Thanks to the high attrition rate, he still claimed fourth place - albeit five minutes behind the winner – but remained officially on the lead lap. The World Championship was his.

But just why did Brabham run out of fuel in the first place? Contemporary reports simply blamed a leak, but a decade later Brabham wrote that his car had run on three cylinders at the start, noting that “it must have lost a lot of fuel out of the overflow and the breather tube had been spilling the fuel down past the carburettor and making it run rich.”

Bruce had another version of the story: “It transpired that Jack, often a last-minute change man, had gone slightly smaller on choke tube size, which made the engine run a little bit richer, and the fact that he had been towing me in his slipstream helped save my fuel – and exhaust his.”

In his autobiography, team boss John Cooper suggested that while he wanted to start a car with a full tank, Brabham had overruled him, preferring to gain a weight advantage.

Whatever the case, Brabham’s misfortune handed the victory to Bruce, and for the first time, the McLaren name was associated with success in F1. It was to be the first of many and the opening chapter in a story that has lasted for six decades.

Celebrating our founder's birthday the only way we know how

Watch Carlos climb the hill from every possible angle