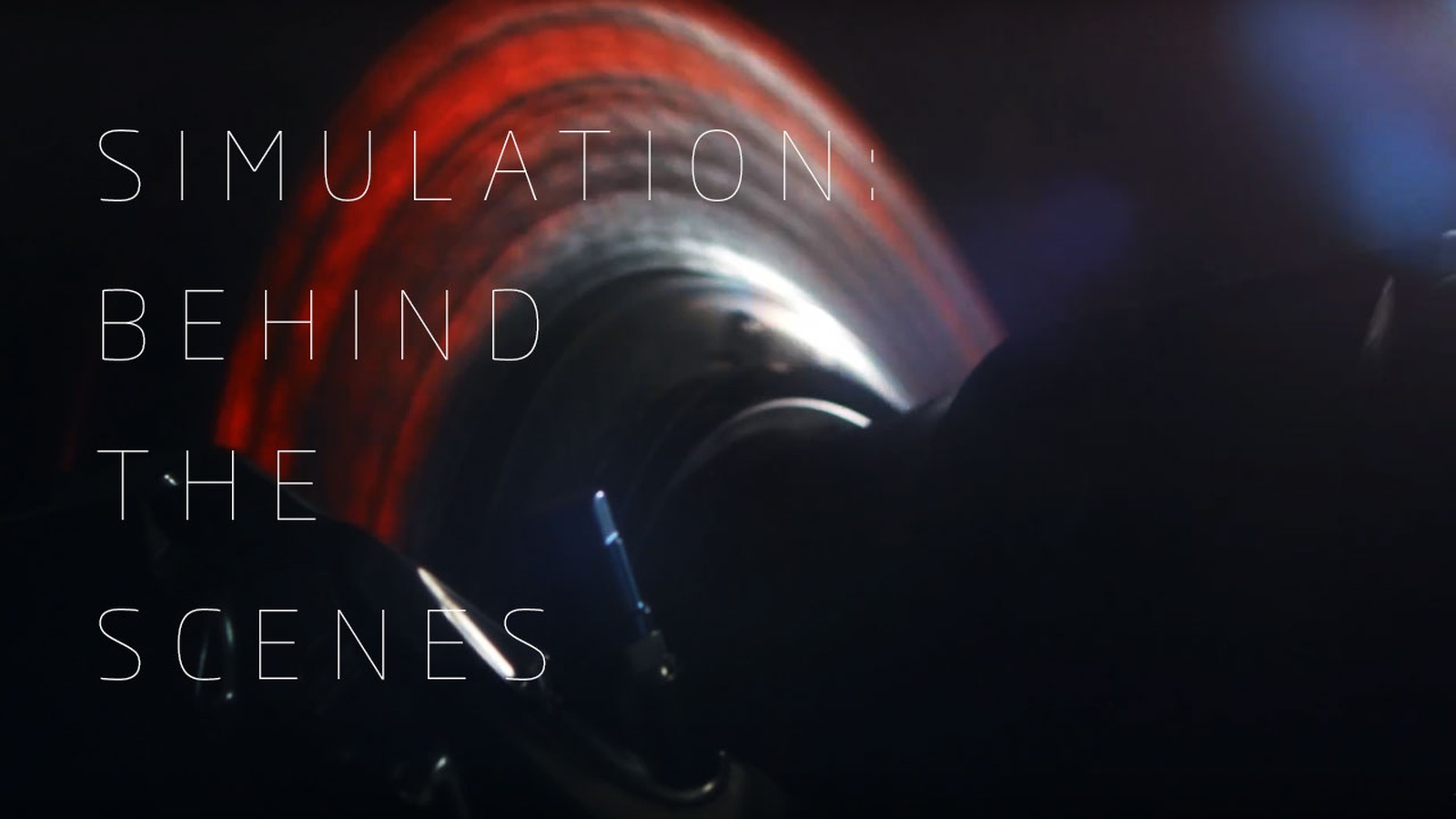 In years past, the primary method of developing an F1 car was to test it on track. Dedicated test teams travelled the world testing new components virtually non-stop, running thousands of kilometres every week. It was a hugely expensive method of proving out new components.

Today, such testing is heavily proscribed, limited to a few days ahead of the new season and perhaps an in-season or end-of-season test too. It has forced F1 teams to rely more heavily on different methodologies. The race to innovate has been intense, with the fidelity of correlation between track and lab becoming a key performance differentiator between teams.

In an ongoing effort to stop a spending war on track simply becoming a spending war in the lab, there are ever tightening limits on various types of simulation, forcing teams to become much more efficient in their use of the tools at their disposal.

It’s a technical challenge every bit the equal of the one on track – but just what armoury of simulations tools are in a top F1 team’s arsenal?

The key tool for power unit development is the engine dynamometer. Engine manufacturers in F1 will have development engines running constantly on test beds as they seek to improve reliability and power output. Work on the dyno begins early in the development cycle, usually with single-cylinder concepts, and continues throughout the design phase and into the working life of the engine.

The infrastructure of the dyno cell consists of a representative air supply, a ventilation system for exhaust gasses, a fuel supply, an absorption mechanism to provide resistance and a suite of sensors to measure torque, power output, rotational speed, fuel consumption etc.,

The engine on test is computer controlled and, rather than running at constant speed or with regular ramps, it will be commonly put through lap simulations. Track running provides excellent source data, and from that engines on a transient dyno can accurately replicate the loading they would undergo during a grand prix.

In the modern era there is more to dynamometer work than simply running the engine. The sophisticated energy recovery systems used in a modern F1 power unit require careful management to optimise their ability to store and return power to the drivetrain. Testing out the various charging and restoration modes is a task that begins on the dyno.

The dedicated transmission or gearbox dynamometer is an integral tool in F1 teams’ never-ceasing quest to develop gearboxes that are smaller, lighter and more reliable. Despite F1 now using gear ratios fixed for the entire season, the gearbox dyno is still a valuable tool in race preparation, analysing shift patterns, lubrication requirements and heat rejection.

The gearbox dyno requires a drive-motor to simulate engine load and an absorption device to simulate the downstream drivetrain. Sensors will measure input and output torque, lubrication temperatures and flow as the dyno puts the gearbox through race simulations.

After a run on the dyno, a gearbox will be inspected in much the same way it would be after a run in the car, with gearbox oil sampled in a mass spectrometer to check gearbox health ­– testing, among other parameters, for the tell-tale tiny slivers of metal (in the parts per million range) that indicate wear. 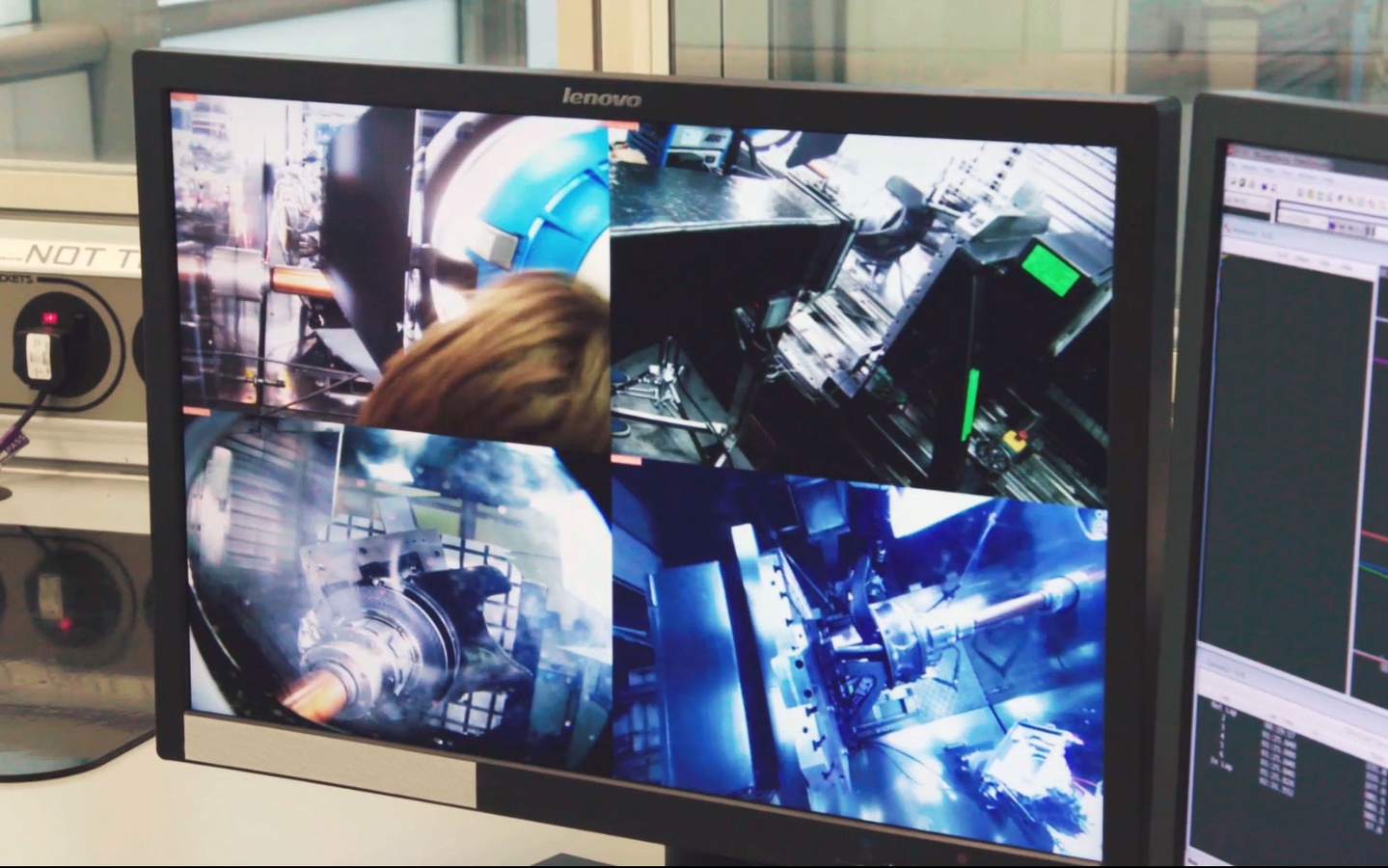 A brake dyno is used to test brake pads, discs and callipers beyond the most extreme conditions they are expected to face on track. As with other dyno tests used by F1 teams, the run cycle of a brake dyno is typically built to replicate the loadings and airflow experienced under race conditions. Depending on the sophistication of the dyno, this is either performed with the disc ‘naked’, or housed within a wheel. The brake dyno consists of a motor to drive a simulated half-shaft mated to a flywheel. The dyno needs to run at 3,000rpm+ to simulate race speeds.

Brake performance in F1 has a number of variables, ranging from the cooling requirements at a particular circuit to the personal material preferences of each driver to get the right ‘feel’. Finding the correct setup is a constantly moving target, with the initial work better done on the dyno than at the circuit. Dyno testing measures braking performance and temperatures, allowing engineers to select the brake correct duct sizes and material composition for each race. 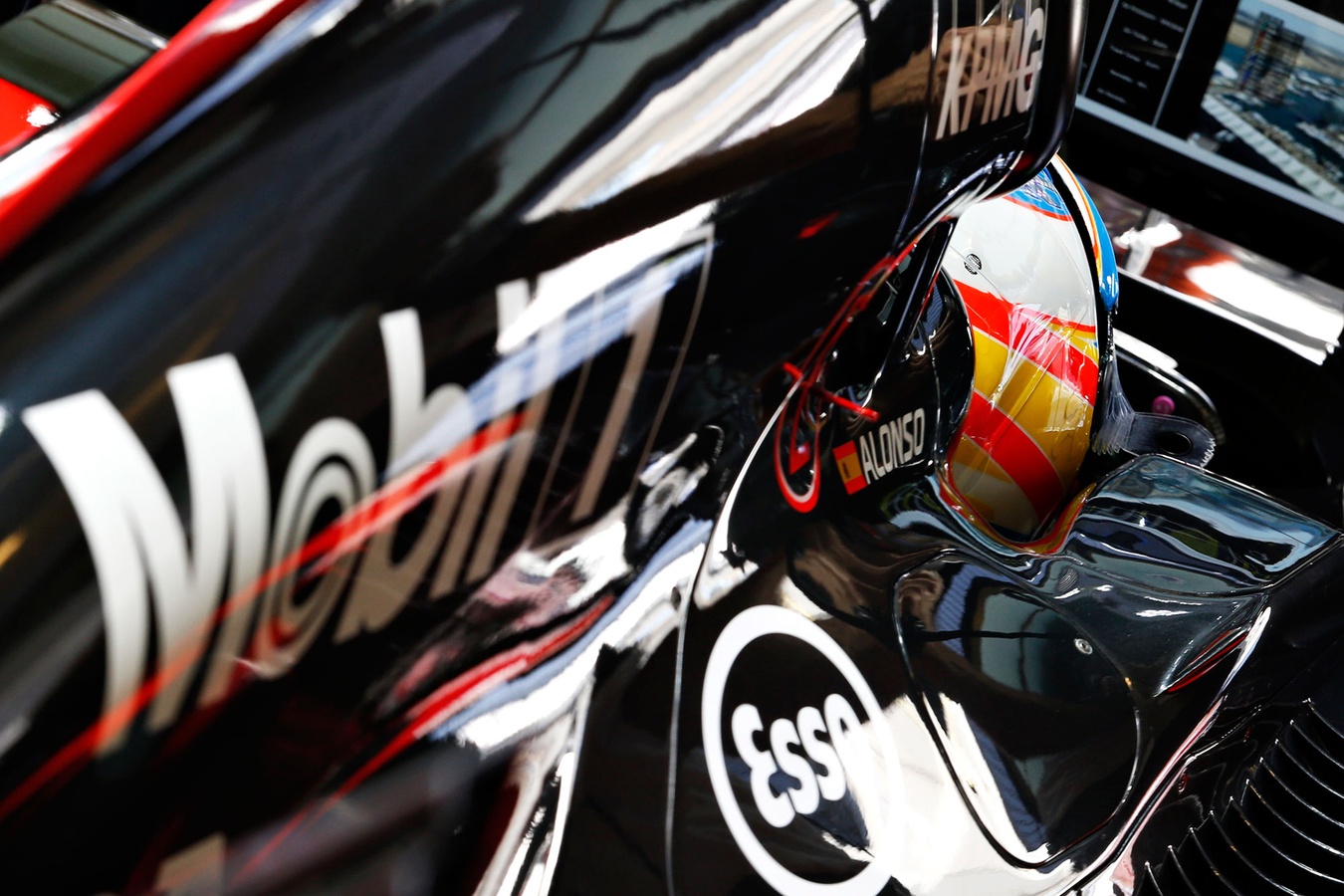 A driver-in-the-loop simulator is a very serious tool, not a video game. It’s always worth stressing this point. Granted, gaming has become very sophisticated, and some drivers admit their first experience of a new circuit has been via a PlayStation – but there is little real comparison.  Pioneered by McLaren, the driver-in-the-loop simulator is a method of modelling realistic car behaviour in a virtual environment, using real-world driver inputs.

Driver-in-the-loop builds on the work done with earlier lap simulators, in which the behaviour of vehicle characteristics is represented by values in an equation, usually derived from genuine track data. In a lap simulator, a mathematically modelled driver would then ‘drive’ the car.  Replacing this with a real driver (putting a driver-in-the-loop) creates a more realistic simulation.

The physical components of the driver-in-the-loop simulator are a seven-poster rig with an authentic survival cell mounted on top, surrounded by a wide-angle display wall. The cockpit features additional haptic feedback (steering wheel and brake pedal kick, seatbelts that pull and give under acceleration/braking) to make the experience as realistic as possible.

The driver-in-the-loop simulator will be used in car design – for example new steering wheel display and button layouts will be trialled before going onto the car – though it is of greater value as a set-up tool. The simulator will help the team to arrive at the baseline setup ahead of FP1. It will then run across the weekend, with a dedicated team at the factory patched into the engineers at the track, verifying set-up decisions taken in the garage and sometimes suggesting new directions, based on the data acquired from the car on track.

It plays a vital role during what is traditionally a time-poor activity. Set-up changes that might consume a half-hour of session time for a full crew of mechanics can be affected at the flick of a switch in the simulator, providing a good ‘read’ to the race engineers.

The driver-in-the-loop simulator has seen intense development in the years since limits were placed on track testing. Such has been its success, the technology has been exported to a variety of other industries. 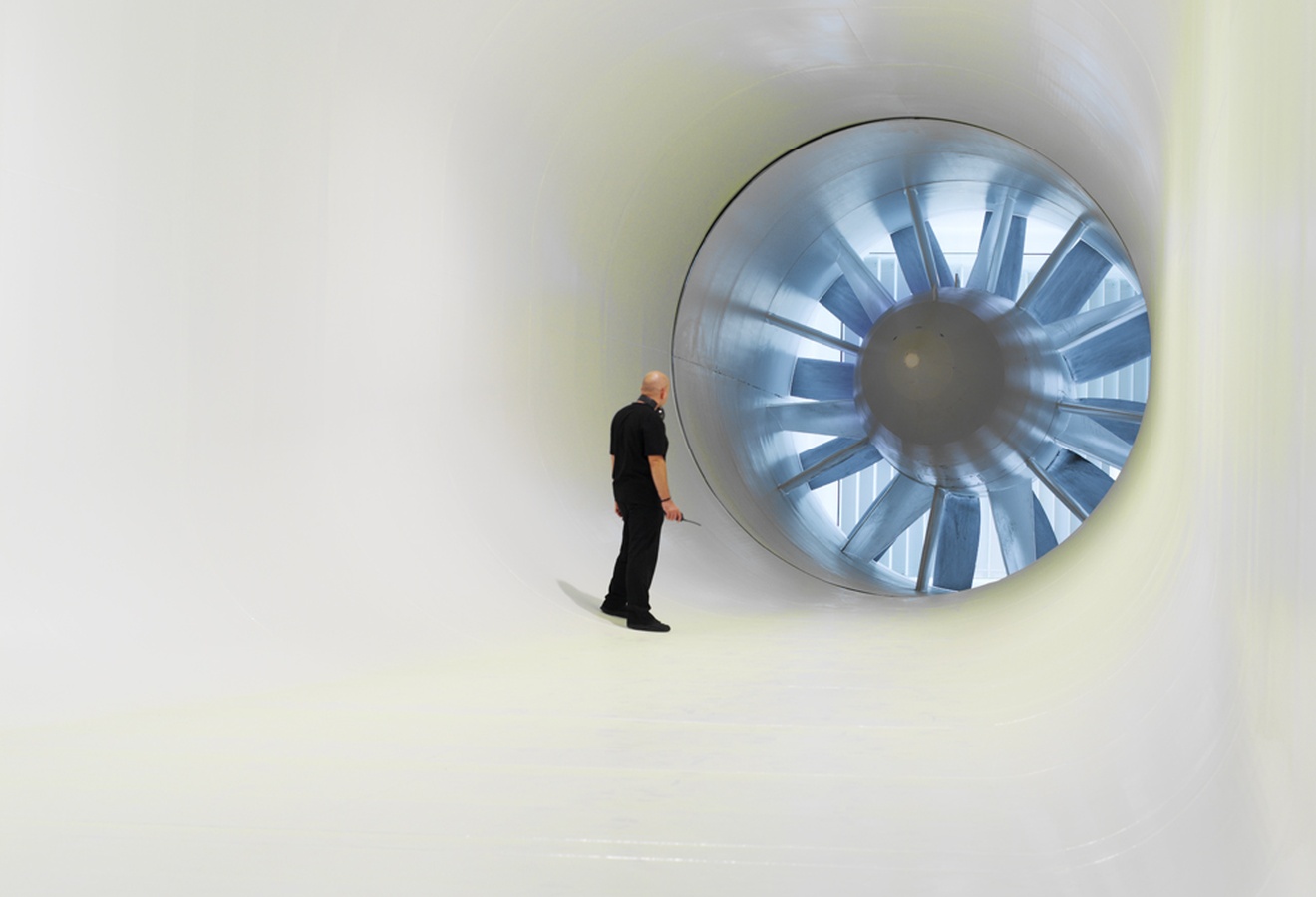 The wind tunnel has been an F1 staple for the last four decades. Despite the growth and increasing sophistication of computational fluid dynamics (CFD – see below), the wind tunnel remains the primary aerodynamic test tool used in F1.

Recent curbs on wind tunnel use (limiting wind-on hours, total hours and number of runs per week) have seen F1 teams greatly improve the efficiency of their work, one element of which is placing a model in continuous motion, driving it through various attitudes, acquiring data dynamically.

McLaren’s tunnel is located within the McLaren Technology Centre, it has a four-metre fan capable of rotating at 600rpm. The tunnel itself is 145m long and 400 tonnes of steel went into its construction. The ‘ornamental’ lake in from of the MTC is a cleverly disguised component of the wind tunnel’s cooling circuit. 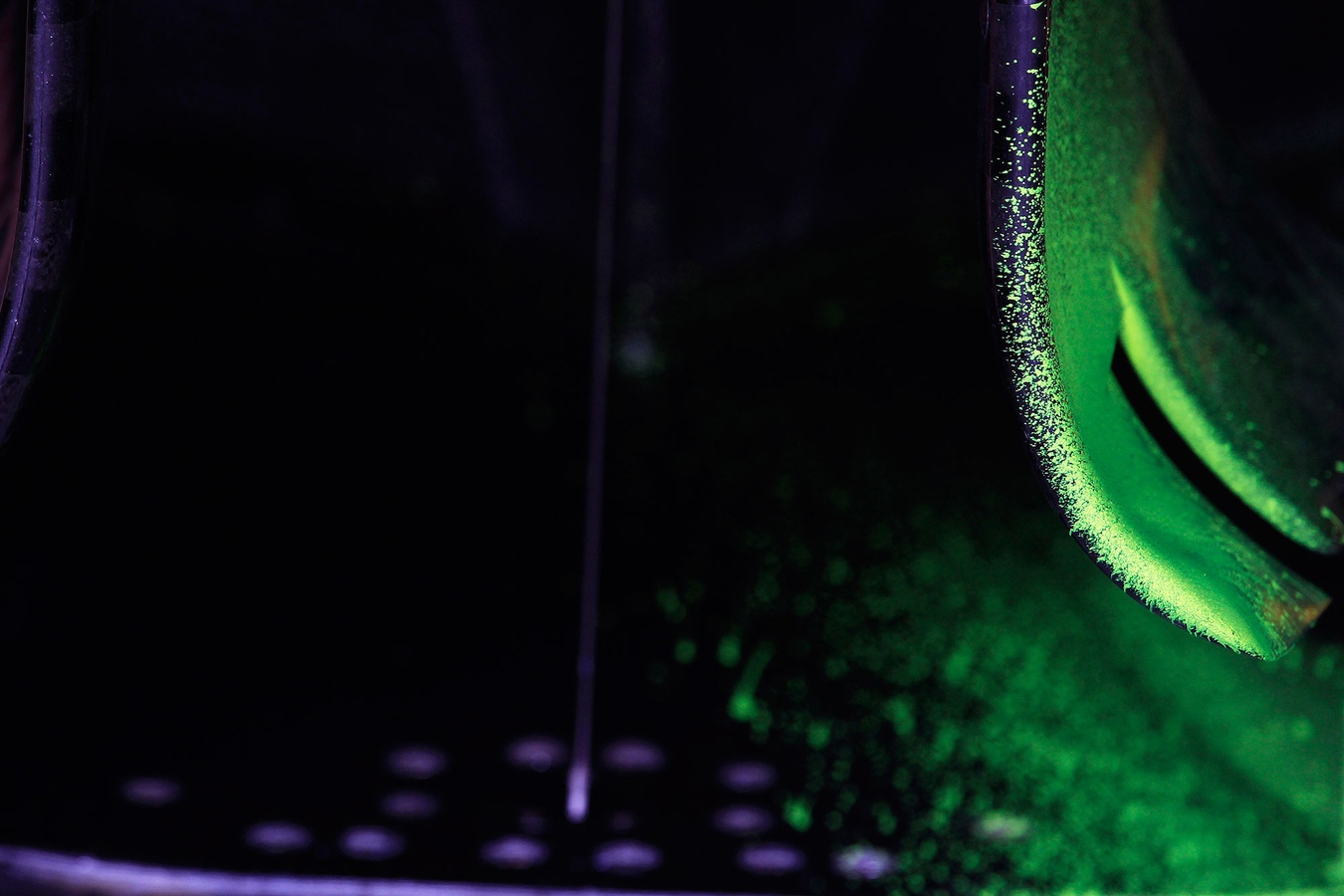 Computational Fluid Dynamics (CFD) is a relatively recent development in the armoury of F1 teams. It is used to simulation the flow of air (a fluid) around the vehicle and the interaction between the air and the various surfaces.

While the theory is not new, using a computer simulation to model airflow around the car requires a level of processing power that was prohibitively expensive in the last century. As processors have become more powerful (and cheaper), so CFD has gained in popularity. It is more cost-effective that building models and placing them in a tunnel but, at its current level of sophistication, CFD is less reliable. It is, however, making great strides.

The technology could be seen as a rival to wind tunnels, but, more commonly in F1, it is viewed as complementary, frequently used as a ‘first pass’ simulation to test ideas. The most successful designs in CFD are then built as physical models and taken to the wind tunnel. This has proved useful with the limits imposed on tunnel time (though CFD is now also limited).

CFD is used not only to research the pure aerodynamics of the car, but also to study exhaust flows, cooling requirements and anything else in the realm of fluid dynamics. 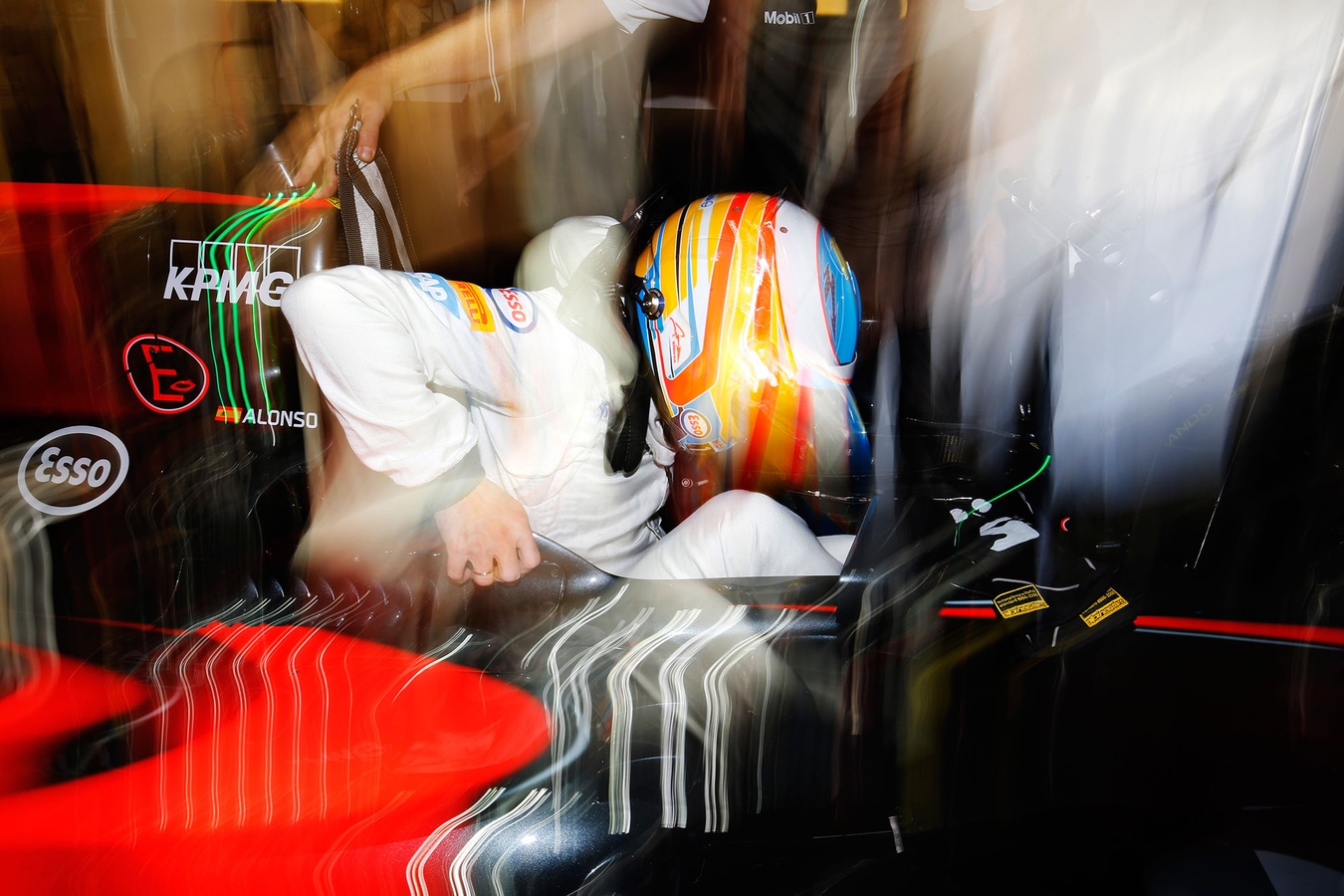 A chassis dynamics rig – sometimes called a ‘shaker rig’ or ‘seven-poster’ exerts forces on an F1 car to dynamically test suspension. The rig can be set up for general testing or to emulate specific race tracks, bumps and all, using data captured from a car on track. It will apply appropriate lift, downforce, braking, cornering and acceleration forces to the vehicle and record the compliance of the suspension.

The seven ‘posts’ are hydraulic actuators mounted on a seismically isolated concrete slab buried below floor level. The technology originated in the road car industry as a four-poster rig – with one actuator positioned under each wheel, used mostly for squeak and rattle tests. For racing, three more ‘posts’ were added to ‘aeroload’ the chassis, simulating the aerodynamic forces and weight transfer acting on the sprung mass car.

The chassis dynamics rig is one of the few testing tools to use a complete car body (perhaps minus the wings). While each component will have been tested individually, the seven-poster allows a team to see the interaction between all of those parts. It provides valuable data for set-up parameters such as ride height, spring rates and damper settings. 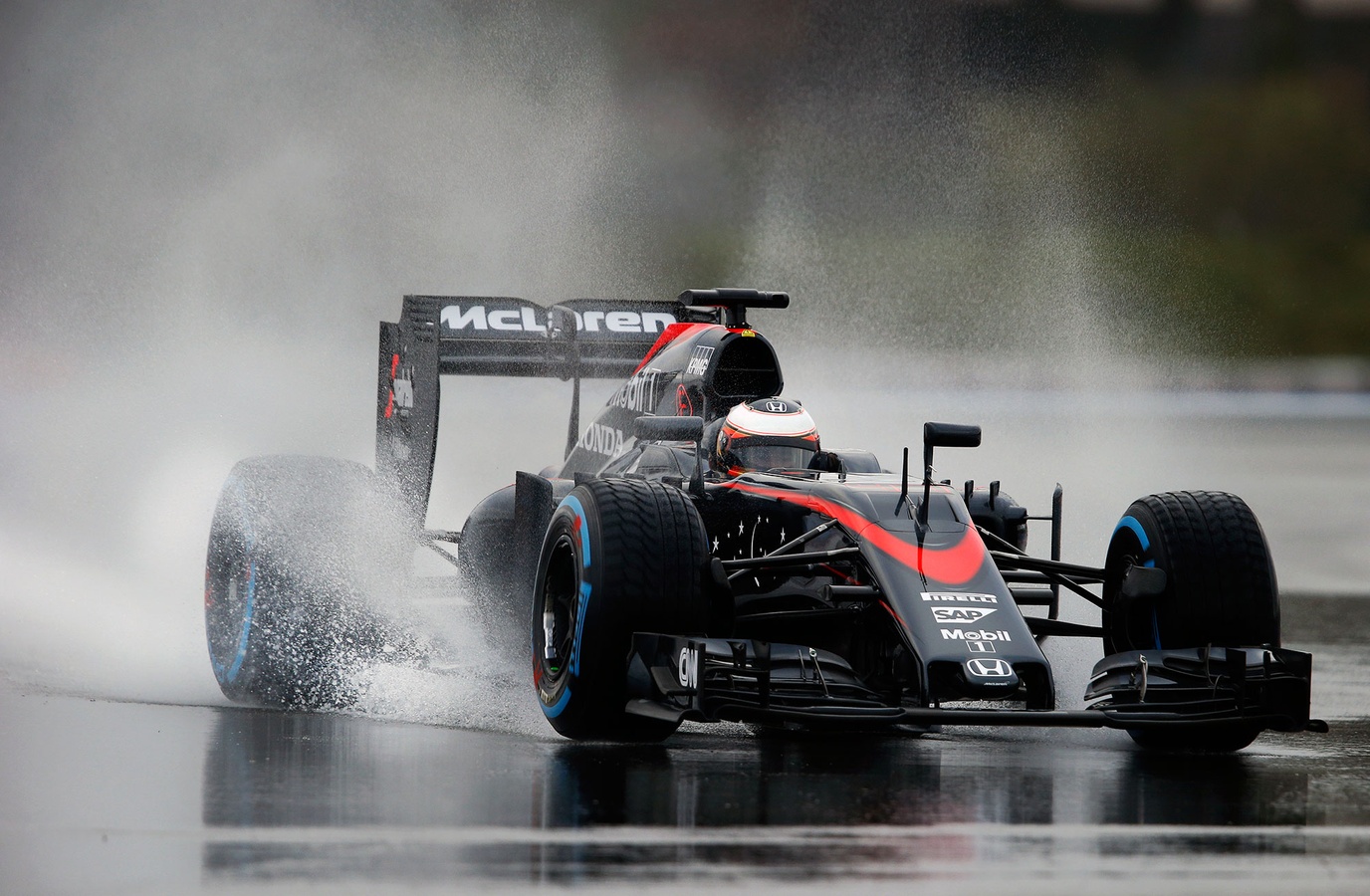 After petabytes of data have been generated at the factory, an F1 car will finally take to the track for the final stage of testing.

In modern F1, track testing is limited to a few short weeks of group tests. This is very different to the situation of a few years ago, when teams would employ dedicated test teams, running almost every day of the year – sometimes simultaneously at two different venues. Simulation tools have largely replaced those track days – but the official tests, and the FP1 & FP2 sessions on a grand prix weekend are now more important than ever.

Track testing is extremely useful for tyre work – as no-one has yet invented a satisfactory method of transient tyre modelling in the lab – but much of the work done on track is for the purposes of verification: proving empirically the conclusions drawn in simulation.

The key word is ‘correlation’. The data produced in simulation needs to closely mirror the data generated on track. A team with a poor correlation between track and any of its simulation tools is developing its car based on false data – and often ends up being led increasingly astray as it grapples to find ‘true north’.

As such, track time is frequently given over to data collection. Cars will be adorned with sensors, ranging from simple heat stickers to complicated aero rakes and pitot masts, measuring turbulence, air pressure and various other flow parameters.

Sometimes low-tech solutions are the best: F1 teams commonly use ‘flo-vis’ – a thin, luminous paint solution that is applied to bodywork in the garage. The car goes out, completes a lap and then is closely photographed to see the flow pattern. It’s very effective – but generally disliked by the crew because it creates a mess in the otherwise spotless garage!