“Give me Goodwood on a summer’s day, and you can keep the rest.”

Thus spoke Roy Salvadori, summing up what I imagine most people still feel about that little pocket of West Sussex for which the adjective ‘glorious’ was seemingly invented.

While ‘Glorious Goodwood’ doubtless conjures up mixed emotions for McLaren fans – after all, it was the circuit that claimed the life of Bruce McLaren during an innocuous day’s testing there in the early summer of 1970 – few would argue that it’s done a fantastic job of re-imagining motorsport’s shimmering, sepia-tinted halcyon days.

And, truth to be told, it does it in the most stylish, authentic and enjoyable way possible.

Put simply, Goodwood’s two tentpole events – the summer’s Festival of Speed hillclimb and the autumn’s Revival circuit meet – offer the best way in the world to enjoy historic motorsport. They combine to create a rich pageant of motor racing that vividly brings the sport to life.

For this weekend’s event, McLaren’s hard-working and dedicated heritage department will be wheeling out no less than three iconic Formula 1 cars to tackle the legendary hill course that snakes and winds its way through the grounds of Goodwood House.

The first needs no introduction.

The McLaren-Ford M23 is one of the most iconic and important grand prix cars of all-time. Great racing car designs are linked to each other like a chain: with regards to the M23, it slotted in immediately after the Lotus 72 (it took Colin Chapman’s early-’70s’ theories of over-body aerodynamics and successfully refined them), and was usurped by Ferrari’s iconic 12-cylinder racers (which dominated the late-’70s both before and during the ground-effect era).

The M23 was a car with oodles of personality – and it wasn’t hurt in that department by the roster of great drivers who helped make it great. When you have guys like Denny Hulme, Peter Revson, Emerson Fittipaldi and James Hunt refining the car over a number of season, you know you’re in safe hands. At Goodwood this weekend, the M23 will be driven by one of its most successful drivers – 1974 world champion Emerson Fittipaldi – as good as dammit a legend as there ever was.

Another reason for such an unparalleled series of great pilots was the design’s longevity: the M23 broke cover in 1973, at the third race of the season in Kyalami, and was officially retired by McLaren in 1977, when Gilles Villeneuve raced it for the very last time as a third-car entry at the British Grand Prix at Silverstone. As McLaren turned its attention to the newer, albeit less well-loved M26 chassis, the M23 still saw active service in the hands of a small army of privateers – including Bruno Giacomelli and Nelson Piquet – until the end of the 1978 season.

In total, the M23 made an utterly incredible 177 grand prix starts. It might not necessarily have been at the technical vanguard of Formula 1, but it carved its successful niche from the fact that it was solid, reliable and, above all, adaptable – it was a car you could throw into the heat of competition, and, week in and week out, it would prove competitive.

The M23 was easily my favourite car turned out by the team during its pre-MP4 era. It’s perhaps the most visually pleasing racer produced in the 1970s, too. And you’ll never, as a fan, get closer to that symphony of aluminium honeycomb and carbon-fibre composite than at Goodwood this weekend.

Yes, the MP4/4 may have won all but one of its races, earning its reputation (rightly, I’d probably agree) as the greatest and most iconic Formula 1 car of all time. But, in terms of wins, the MP4/2 eclipses it. 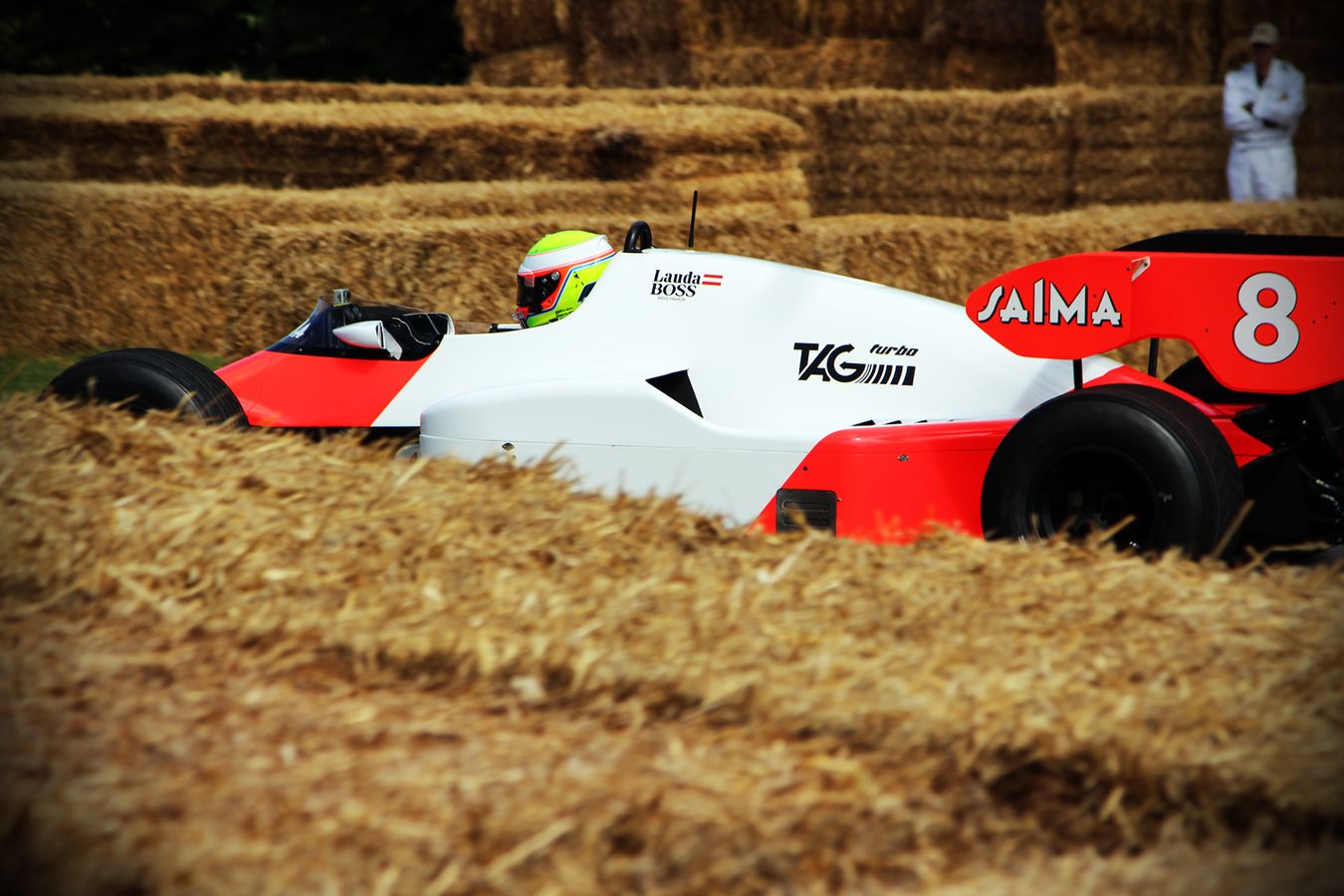 How so? Well, the MP4/2 that was fielded in 1984, and which will run at Goodwood this weekend, was only partly modified to make its successors – 1985’s MP4/2B and ’86’s MP4/2C. Indeed, so cosmetic were the changes that the same tubs were used throughout that three-year period with only minor revisions.

Now, perhaps you can start to see why I made such an initially contentious claim!

Anyway, why use logic to get in the way of emotion? After all, I’m pretty sure you won’t be at Goodwood this weekend armed with a pocket calculator!

The MP4/2 was a Formula 1 game-changer because it was the first modern car to fully mate chassis, engine and ancillaries to create a cohesive ‘package’ – that holy grail that F1 designers are still chasing to this day.

The genius of its chief architect John Barnard was to create a single over-arching design – from the tip of the car’s front wing to the rear of its gearbox. The 1.5-litre, 60-degree Porsche V6 was perfectly specced to fit the tub (in fact, it was specced with such a relatively narrow vee-angle in order to provide suitable swept-up volume for the elaborate ground-effect tunnels that were originally planned until the FIA pulled the rug from under Barnard’s feet by banning it at the end of 1982 – but that’s another story, and far too long to fit into this already too-long set of parentheses); the carbon-fibre tub – a technology pioneered by McLaren in 1981, remember – was simple but effective; and the suspension, cooling and ancillary routing was all duly considered and well implemented.

Remember, too, Barnard was instrumental in wresting design influence away from the humble mechanics who had previously enjoyed the freedom to design brackets, braces and impromptu Heath-Robinson-eque solutions to make the car more functional in the field. Barnard’s McLarens stopped all that – and the MP4/2 was the first chassis to make those revision work to truly devastating effect.

The MP4/4, my friend, was merely the beneficiary of all that crucial legwork – and benefited from it very nicely, thank you very much. The MP4/2 was the team’s true workhorse. 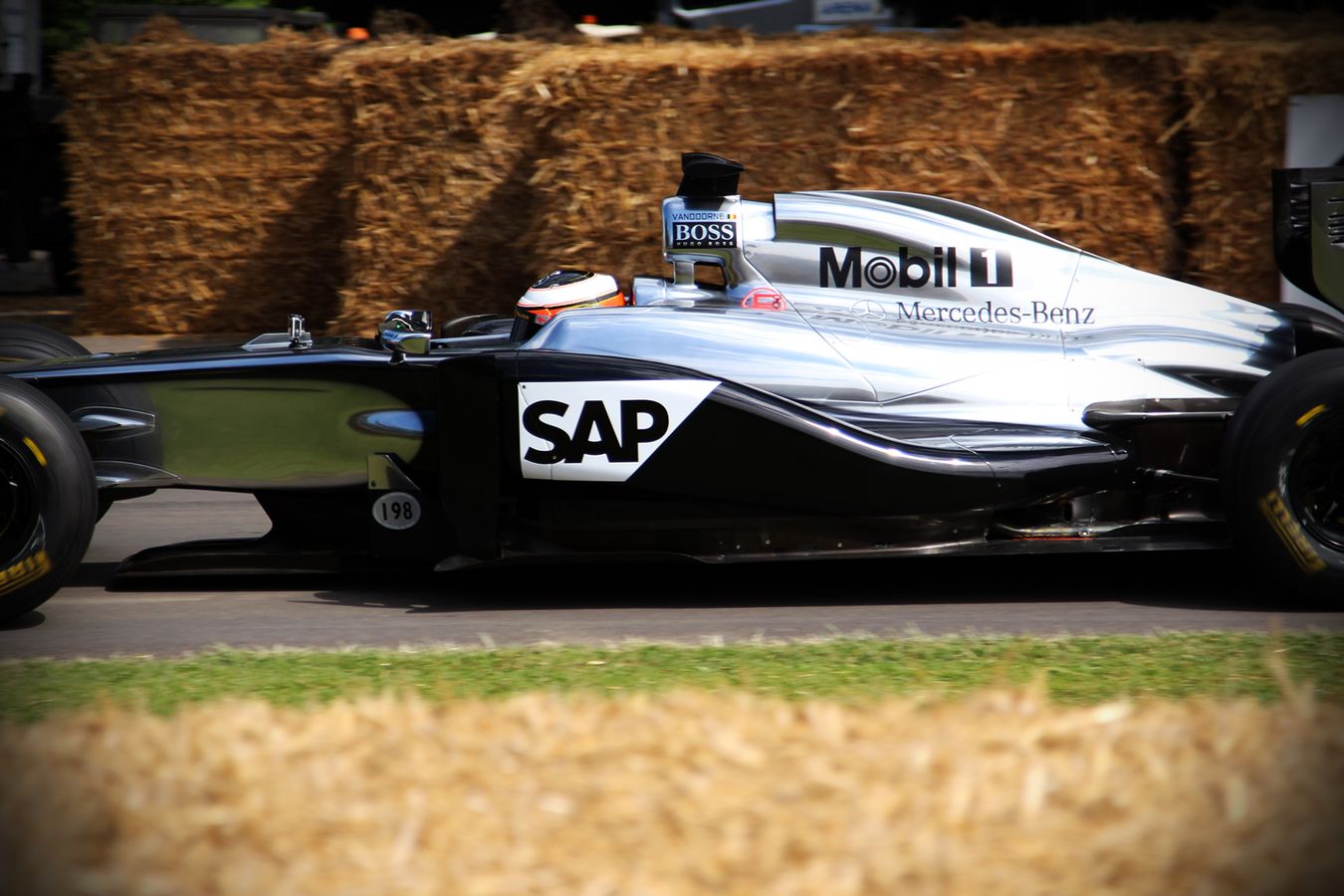 The third car on McLaren’s Goodwood list is certainly the least feted of the three – MP4-26, the car that won six memorable races in 2011. You couldn’t bracket it alongside the M23 or the MP4/2 – it wasn’t one of the torch-carrying cars of its era – but it was the style in which the car won that make it such a special and much loved part of the McLaren story.

MP4-26, if you’ll remember, didn’t come into this world in the best of shape. Revealed to the world at a somewhat funereal launch event in a shopping centre in downtown Berlin on a sleeting, freezing February morning, it went straight to Barcelona for its first test of the winter – and quickly encountered problems.

The car’s overly complicated exhaust configuration, which wrapped the primaries in all sorts of elaborate shapes before splitting them into a fan-like section that exited along the side of the floor, was intended to capitalise on Formula 1’s newly discovered enthusiasm for exhaust blowing. And this solution, reckoned McLaren’s brainy so-and-sos, was the best way forward.

Unfortunately for MP4-26, the ‘octopus’ exhaust configuration proved, ahem, exhaustively difficult to make work; it blistered and buckled the pipework with alarming regularity before any meaningful testing miles could be racked up. It was binned before it had even raced, and replaced with a far more conventional design – which happily proved to be immediately on the money.

The team was so wary about its untried solution, that it travelled to the first race in Australia feeling wary about even finishing. However, Lewis Hamilton planted the car squarely onto the front row and went on to finish second. It wouldn’t be long before those memorable wins started flowing.

It was race three, in China, where Lewis first came good. If you’ll recall, he had the bit between his teeth from the very start (always a good sign from young Lewis) when his car suffered a fuel leak in the pitlane before the start. He only made it to the grid following some hurried heroics from his faithful pitcrew, who got his car moving with only seconds remaining.

In the race, Lewis’s strategy placed him behind Sebastian Vettel’s Red Bull as the pair began their final stint. The advantage looked set to swing in the German’s direction, but Lewis continued to hunt him down, brilliantly making a pass at the most unexpected of overtaking spots to claim the lead in the closing laps. It was pure Lewis: a victory that drew on the strength of almost overwhelming odds to claim an unlikely victory.

MP4-26’s next win came in Canada, and it took Jenson Button more than four hours to achieve it. That bald fact might make the race sound somewhat tedious, but that couldn’t be further from the truth.

Jenson came from the back of the grid (twice!), where he was struggling to keep pace with the Safety Car; he endured five pitstops (encountering a drive-through penalty, a punctured tyre and a replacement nosebox on top of his regular stops for fresh rubber) and then drove his proverbial nuts off to close the gap and pass that man Vettel again. And he did it on the very last lap, to boot. It was Jenson’s day of days, the race performance that will go on to singularly define his life and career.

When a racing car wins a race such as this, there’s part of you that believes that the car itself is willing itself to win. That unlikely victory endeared the car to its engineers, mechanics and drivers because they all recognised something of themselves in its design. And that’s what makes it such a well-loved member of the McLaren heritage department.

That it went on to score fine wins in Germany (at a near-freezing Nurburgring), Hungary (appropriately enough, providing Jenson with a victory in his 200th grand prix), Japan (a mighty giant-killing performance from Jenson to see off the combined challenge of Vettel and Fernando Alonso) and Abu Dhabi (a tour de force for Lewis) only underlined its credentials as a bit of a scrapper.

It might only be a tangle of carbon-fibre, alloy, rubber and paint – but it’s something we’ve grown to love.

And that, after all, is why you’ll doubtless be making that annual pilgrimage to Goodwood this weekend – to seek and to find a connection with the men and machinery that work so hard to make our sport so good, so great, so glorious.

The day two heroes were made