Silverstone is gearing up to celebrate its 50th grand prix event this weekend – the Northamptonshire airfield circuit first hosted an international event in 1948, and memorably ran the first ever Formula 1 world championship event, when the British Grand Prix was held at the track in the summer of 1950.

Event organisers will be celebrating the landmark with a track parade of historic Formula 1 cars (driven by legends such as Sir Jackie Stewart, Nigel Mansell, and McLaren’s 1974 world champion Emerson Fittipaldi, who’ll be behind the wheel of the equally legendary M23).

By rights, I ought to be hosting my own little celebratory event this weekend, too.

A quick check on my trusty pocket calculator, then 2014 will mark my own personal 50th grand prix since my mother drove yours truly and his pal through the Dartford tunnel to watch the first British Grand Prix to be held at Brands Hatch, way back in 1964. And I’ve missed only one in that timeframe.

That’s quite a stretch, 51 years, but let’s keep it to ourselves, right?

Anyway, yes, it’s true: my first visit to the British Grand Prix was conducted from the front passenger seat of a Ford Consul, one of the dreariest automobiles known to man. And if you feel the need to ask what a Ford Consul actually was, then I can only say, ‘Lucky you’. It wasn’t one of the Ford Motor Company’s proudest moments.

Anyway, in 1964 I only went to two races, at two different tracks: Brands Hatch, where the legendary Jimmy Clark made his Lotus 25 shimmer and dance to a close win over Graham Hill’s BRM P261; and Crystal Palace, the parkland track in south London where new boy Jochen Rindt writ his name large in lights at the wheel of his a Formula 2 Brabham. Heady days.

I was back at Brands Hatch in the spring of ’65 to watch Mike Spence win the non-title Race of Champions in a Lotus 33, a race that saw Clark’s sister car all-but-written-off in a huge shunt behind the pits. I also returned to Silverstone for that year’s British Grand Prix – which had begun alternating the fixture between the two circuits on a yearly basis.

You might well ask precisely why the alternating fixtures came about? Haven’t a clue, is my honest answer. When you’re 17, and your spare time most weekends is spent marshalling at club races for the British Racing and Sports Car Club, you just accept events under the ‘that’s how it is’ mental sub-heading.

I always loved Brands, though. So while the world turns its attention towards the magnificent Silverstone for this weekend’s Santander British Grand Prix, I wanted to spare a thought for the other great British track that Formula 1 has somewhat forgotten.

If Silverstone was the king of speed, the ‘British Monza’, if you will, then Brands is this country’s Imola – grand, sweeping, tricky, dangerous and tinged with a certain sadness.

And, of course, Brands has better corners. So let’s take a virtual trip around the track and remember what makes this one of the greatest circuits in motorsport history. 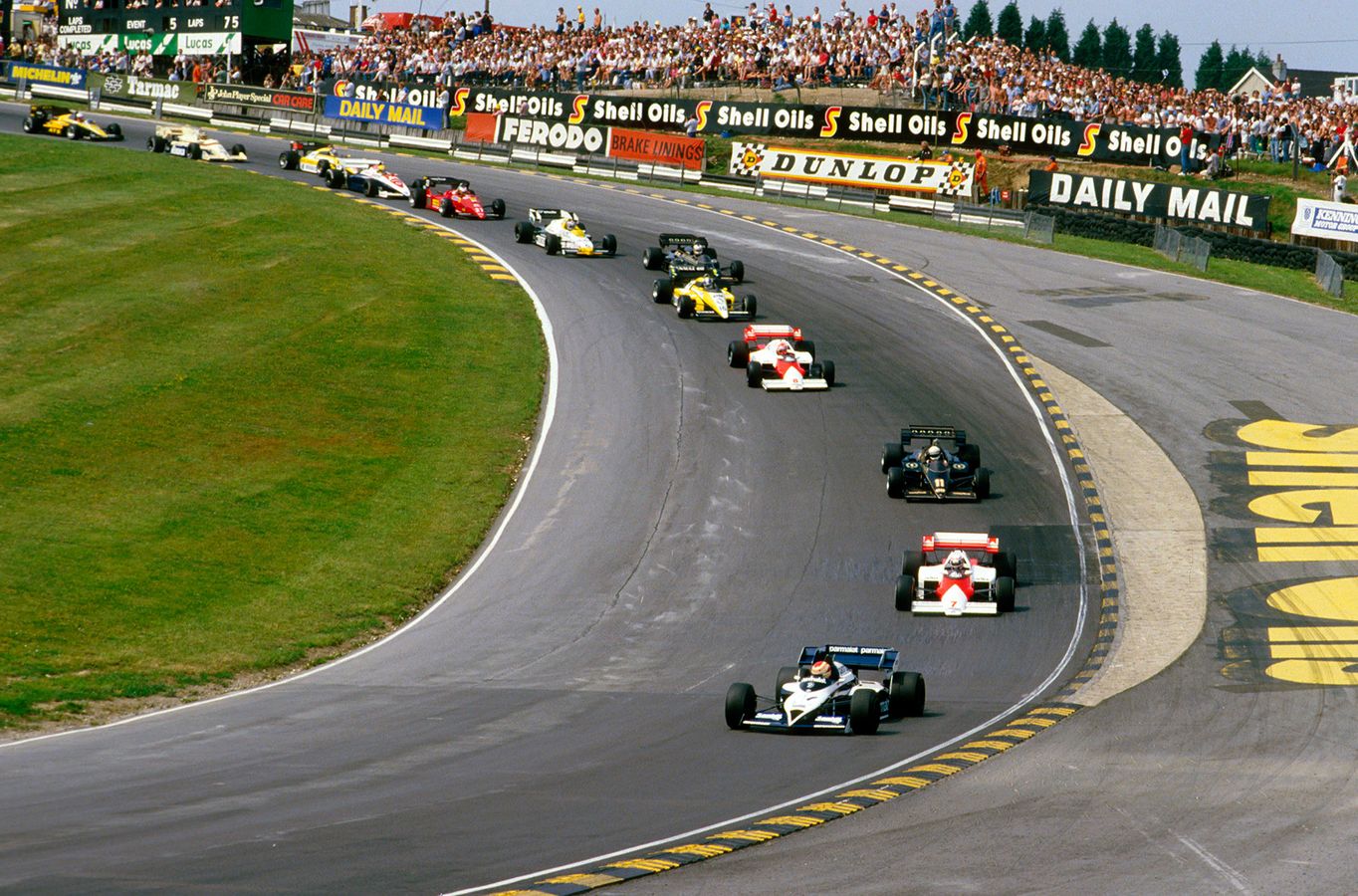 The first turn, Paddock Hill Bend, was one of the most exacting ‘vertical corners’ on any racetrack, and I used to marshal there quite regularly. It’s the kind of corner they simply don’t make anymore. When those first Brands architects simply spread asphalt over that lumpy, bumpy stretch of Kent countryside, they can nary have known what they were creating.

Indeed, they doubtless didn’t, because the very first iteration of Brands (a kidney-shaped track similar to the existing Indy circuit that sat within the bowl of the land) was raced counter-clockwise by enthusiastic pre-war motorcyclists.

Paddock Hill is unique – its meandering camber, blind entry, tucked-away apex, and rollercoaster swoop down into the basin of the land is something that only comes from letting Mother Nature be the judge of the racing line.

And a pretty fine judge she was: look at the Nordschleife, Laguna Seca, or Suzuka – all tracks that were carved into the natural landscape, all benefiting from the unique challenges presented by the local topography.

At the top of the hill, the cars scramble for grip, often raising the inside-front wheel as they drop into the groove, then compress heavily as the suspension loads up at the exit. The exit kerb grew wider and wider as the circuit was progressively re-profiled – and I don’t think I’ve ever seen a racing car not want more kerb at the exit of that particular corner.

It’s risky too – I’ve lost count of how many accidents and collisions I’ve seen at Paddock Hill, whether it be over-exuberant Formula Fordsters, or battling Ferrari drivers tripping over themselves off the startline.

A corner that introduces an element of risk – such as the old Woodcote at Silverstone used to – you add spice and variety to racing. To be clear, I’m not talking about unnecessary risk; what I’m referring to is the requirement for a driver to question his commitment before attacking. At Woodcote, there’s always the option to nail the throttle and take it flat, but caution usually comes into play, and a little confidence lift makes things easier than catching a massive tank-slapper. Just ask Jody Scheckter.

So, create an environment where the brave or the utterly committed can gain speed, and you’ve succeeded as a circuit designer. 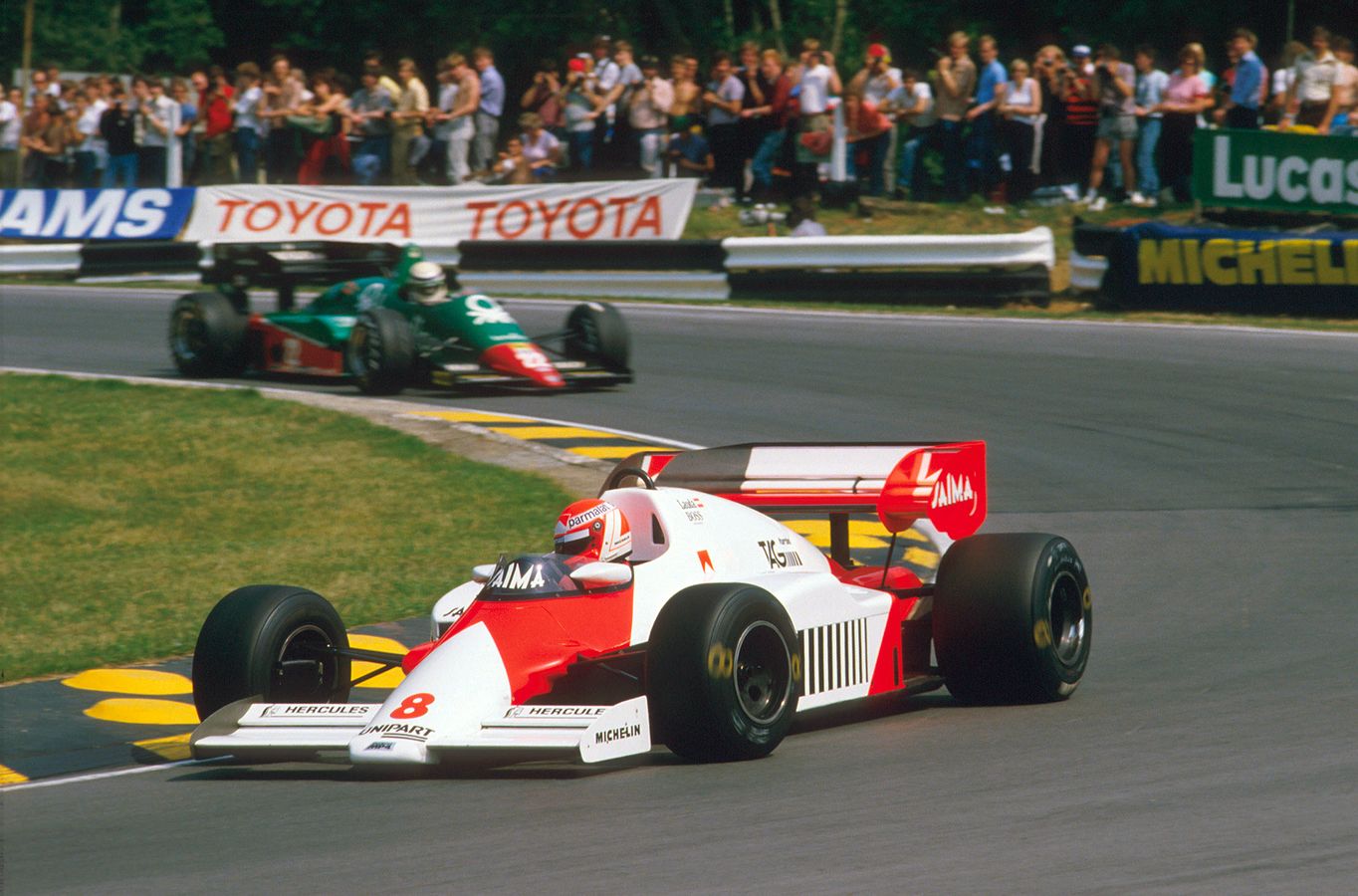 Out of Paddock, and provided you haven’t induced that aforementioned tank-slapper, it’s a relatively straightforward approach to Druids Hill. It’s a fairly straightforward 180-degree hairpin – but, again, it’s designed to catch out the unwary.

It has a blind entry as it sits on the crest of a hill, and there’s minimal run-off available to rescue the over-committed. It’s an easy one to overcook, too: the momentum and the flow that’s been carried round the rest of the lap gets scrubbed off for the circuit’s slowest corner, so it often requires careful calculation to reduce momentum to the necessary speed. It’s a long, understeer-inducing corner, too, so it also catches out the impatient.

Some racing drivers will tell you that the next corner, Graham Hill Bend, or Bottom Bend as it was once called, is barely a corner at all, yet I’ve seen countless drivers lose it through here, running onto the wide grassy run-off, or rolling to a halt with crumpled bodywork. Again, it encourages drivers to push above and beyond the limit; and, because it’s a relatively fast and straightforward corner, it prompts side-by-side racing – something that further narrows the odds of making a clean exit...

The Surtees left-hander follows the Cooper Straight, before the F1 contenders are spat onto the uphill Formula 1 extension like a bullet from a gun.

If the Brands ‘Indy’ circuit almost felt like one long continuous corner, the grand prix track was a different beast altogether. It was terrifically fast, composed of long, undulating straights, and three right-hand bends that all deserve the status of ‘mighty’.

Hawthorn Bend comes first. It follows the rolling dip of Pilgrims Drop and the uphill approach of Hawthorn Hill. It appears from between the trees, and like Stowe corner at Silverstone, used to be taken nearly flat in top gear, requiring a feathering of the throttle in the grand prix machinery of the time. 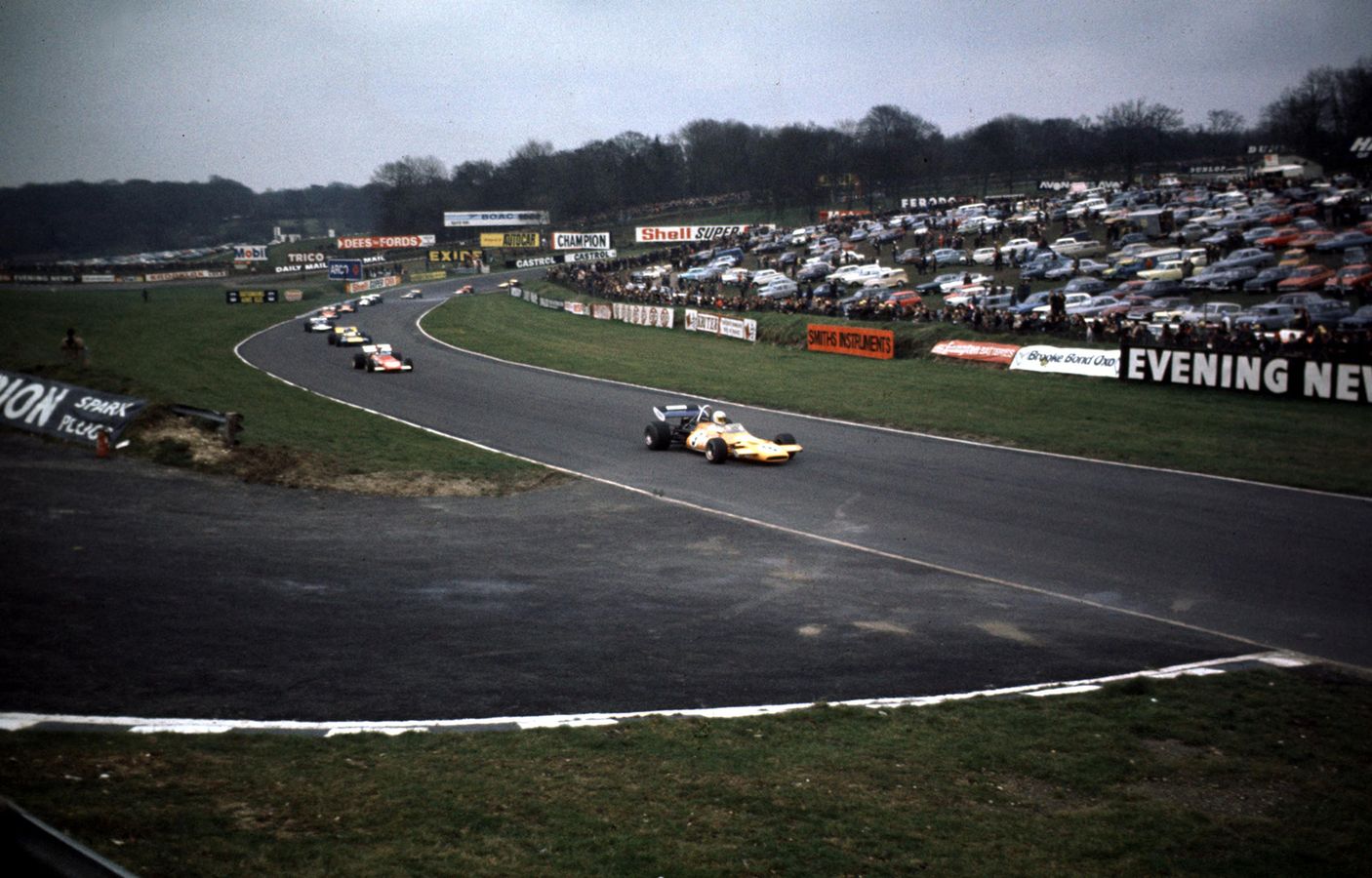 And there was minimal run-off too, just a fat, lumpy kerb, a strip of grass, then Armco. Behind that lay thick, dark forest. In those days, you didn’t want to hit the Armco, and you most certainly didn’t want to end up in the trees. It was at Hawthorns that Jo Siffert was so tragically killed in the 1971 Race Of Champions, in a fiery accident in his BRM P160.

Along the Derek Minter Straight, named after the great motorcyclist, and into Westfield Bend – an even faster corner than Hawthorns. Westfield was a downhill curve, the cars gathering speed at the exit before plunging through the quaintly named Dingle Dell. Still, those barriers were menacingly close, and if you got the car on the grass at that speed, there was a pretty good chance you weren’t going to get it back.

Then things started to get complicated: Dingle Dell’s right-hand kink was tricky to get right in order to fully commit the car to the fast-approaching Dingle Dell Corner, a fearsome right-hand flick that always seemed to spit the car out violently upon exit. Inertia tries to continue pushing the car leftwards, further away from the entry point, so it requires a tricky act of balancing throttle and brakes to get the nose of the car behaving properly and pointing in the right direction.

Stirlings Bend was probably the most straightforward corner on the circuit, a medium-speed left-hander with an assuring positive camber that sews the grand prix extension back to the original track. By virtue of the adjoining straight, the approach to Clearways became much faster and more intimidating. Clearways blends into Clark Curve, a graceful right-hander with a hard-to-spot apex. The temptation is always to get on the throttle early, to nail the back-end, and commit to the short startline straight before the next plunge into Paddock. But the exit disconcertingly narrows, and the track wallows a little, making it difficult to cleanly pick up the throttle without discombobulating the back wheels.

Will it ever come back? Who knows.

But if the Osterreichring had lain dormant since hosting its last F1 event in 1987 (which it did, apart from a brief foray between ’97 and 2003), you’d have thought little of its chances of making a fully fledged grand prix comeback. Yet that’s exactly what Dietrich Mateschitz made happen last month with the sensational return of the Red Bull Ring.

Can you imagine how incredible it would be to watch 22 contemporary Formula 1 cars cresting the rise into Paddock Hill Bend, surging and tumbling over themselves in the rush up to Druids?

If I could still squeeze into my old, orange BRSCC marshals’ uniform, I promise you I’d be fighting for the chance to be stood by the side of the Armco once more. Fantastic…