The Miami Grand Prix according to social media

The Miami Grand Prix according to social media

Alrighty then. Choose your own superlatives: the Miami Grand Prix weekend was amazing, inspiring, astounding and remarkable; on the other hand, the race on Sunday was frustrating, exasperating and, ultimately, unsuccessful. The last time F1 came to Florida, Bruce McLaren won; this weekend, the team that carries his name departed empty-handed. Such is the nature of the beast.

But first, the good part. Wow. For sheer bustle and swagger, there hasn't been a grand prix like this one. Monaco has always been the yardstick for activity; while Montreal and Interlagos call the tune when it comes to a densely packed, atmospheric paddock – but Miami comfortably (definitely the wrong word) takes top spot for both these metrics. And not by a little, by a lot. The team was busier than ever, entertaining more partners and guests; welcoming more fans to our bespoke Turn Four McLaren Race House, hosting more celebrities in the garage and just generally scurrying from pillar to post from dawn until… well, long past dusk. 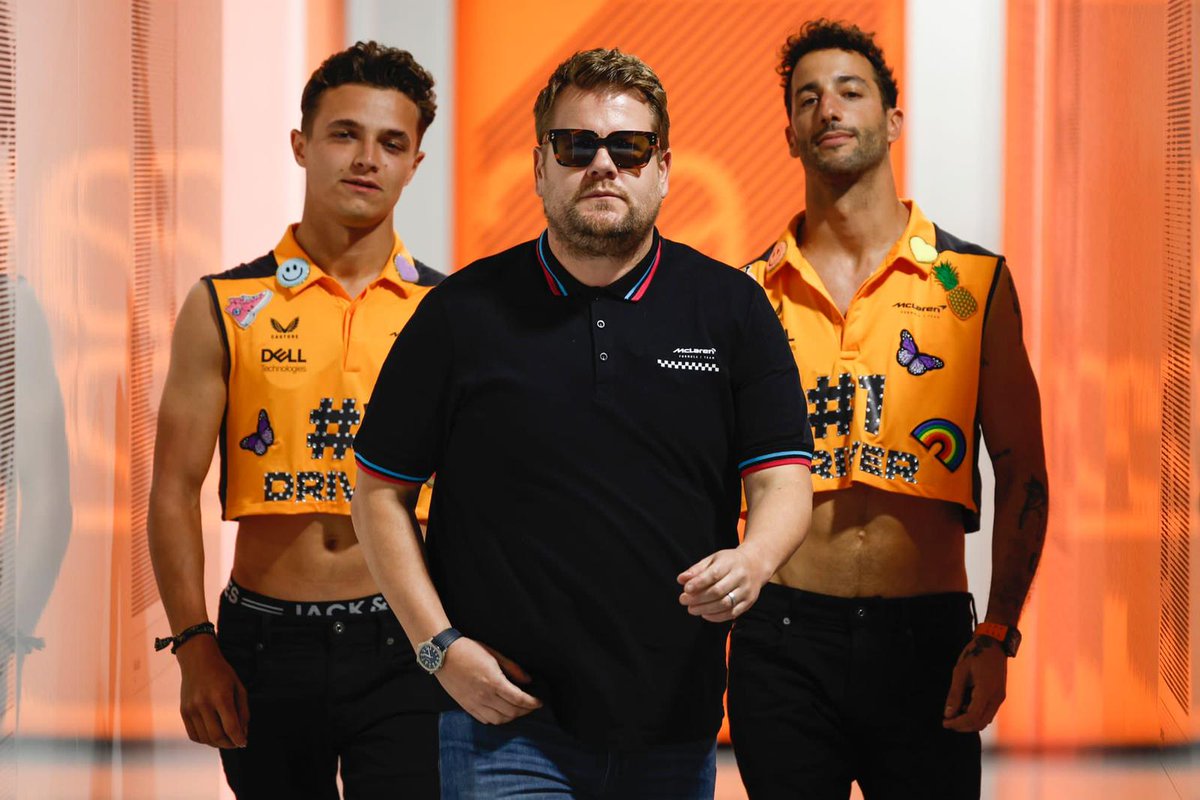 It'd been a busy week for Lando and Daniel, up and down the East Coast all week, doing everything from late night TV to gala appearances, water sports, golf and more. Lando also unveiled a basketball-themed helmet, while Daniel went for an Ace Ventura theme which, given he quotes the movie every three minutes of every single day, came as a surprise to precisely nobody.

@McLarenF1 @danielricciardo I don't know how to race will end on track , but in the helmet competition is easily a McLaren 1-2

With all the hoopla and razzamatazz, came the first track session. Low-grip on the racing line, no-grip off the racing line and hastily patched sections where the surface was breaking-up, made the track quite a handful for the drivers, most of whom felt they were tip-toeing around a very difficult circuit. Lando and Daniel negotiated Friday's practice sessions unscathed – but a series of red flags when others were less fortunate made for a disjointed day: the team gathered a lot of data – but in many cases it raised more questions than it answered.

@McLarenF1 Great work Team!!! Got thru the programs & got lots of data. Qualifying will be very important so heads down & full attack! 🧡👊

Saturday was a little more of the same. Before going to Miami, the expectation was that the circuit and the temperatures wouldn't suit the MCL36 to the same extent Albert Park and Imola had – but the team was hopeful of something more in-line with Jeddah, rather than Bahrain. That was confirmed by the practice times – which also made clear there was a great midfield scrap in store. 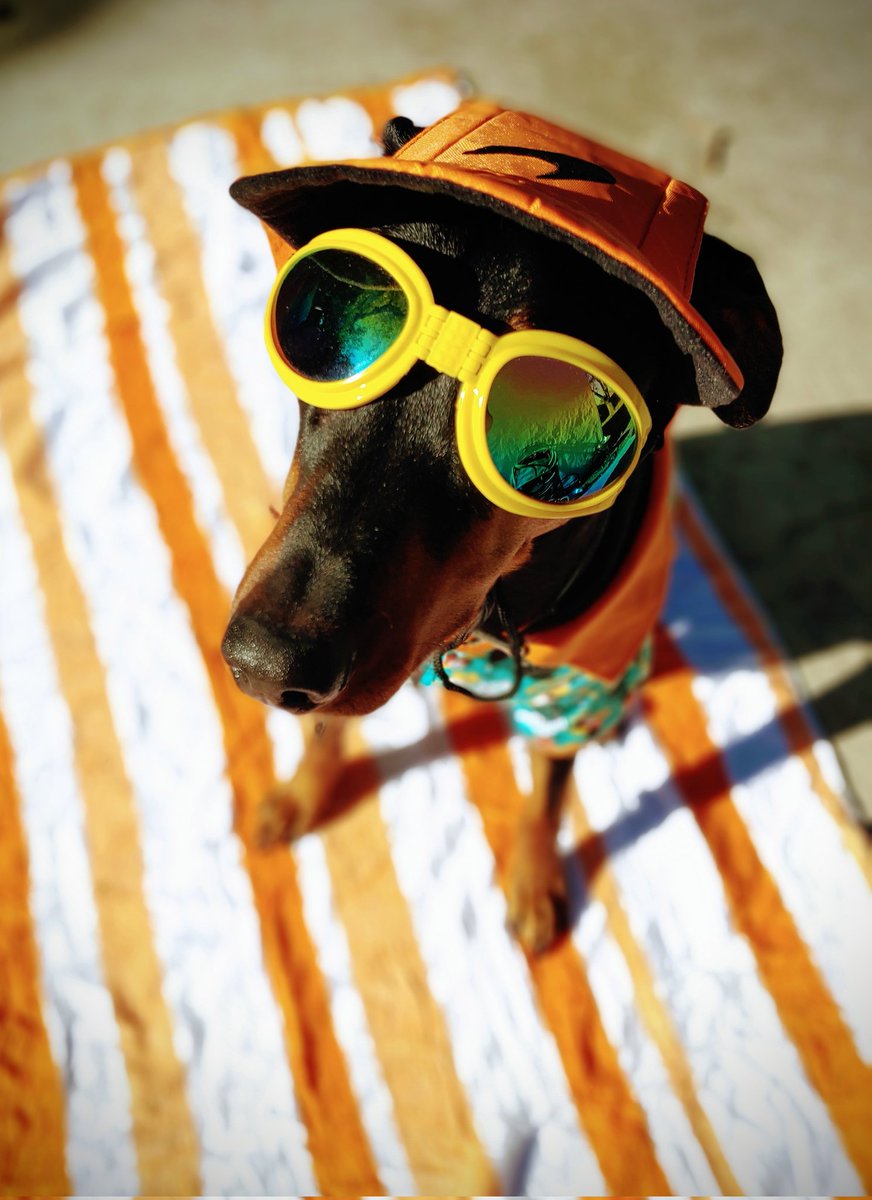 Qualifying, amazingly, went off without a single red flag, but Daniel suffered a cruel blow after looking very competitive. He hit the starter sequence for a final run in Q2 with three minutes left on the clock and… nothing. No fire-up. With no dramatics and very little discussion, Daniel, his crew and engineers diagnosed the problem, very swiftly reset, had the starter wand inserted and got him fired-up – but leaving the garage at the emergency leave time, he had to do a flying lap just to get over the start-line before the chequered flag. At that point his energy store was depleted, his Soft tyres cooked, and he could do no better than to limp to 14th. Few people noticed that Lando delivered an absolutely brilliant lap for P3… though some did.

@McLarenF1 All to play for tomorrow team. Another early morning one for us in Brisbane but we will be up cheering you all on 👏🙌🧡

In many ways, Lando’s Q2 lap summed up the weekend. It was a mystery. He couldn’t explain where it came from and couldn’t replicate it later: finding an elusive amount of grip that didn’t appear consistent. He qualified out of Q3 with a slower lap to start P8 – but didn’t feel there was much more he could have done. Other drivers were equally mystified. The Miami International Autodrome is an odd fish.

Sunday was much of the same. Overnight rain had washed away whatever rubber had gone down, and showers at lunchtime and then 30 minutes before the cars went out, had everyone looking thoughtfully at the sky – but the race stayed dry, which was good for the enormous horde of spectators.

@McLarenF1 Here in the Mclaren grandstand and ready to go!🧡🧡🧡 https://t.co/PAEWZP2pMI

@McLarenF1 Here in the Mclaren grandstand and ready to go!🧡🧡🧡 https://t.co/PAEWZP2pMI 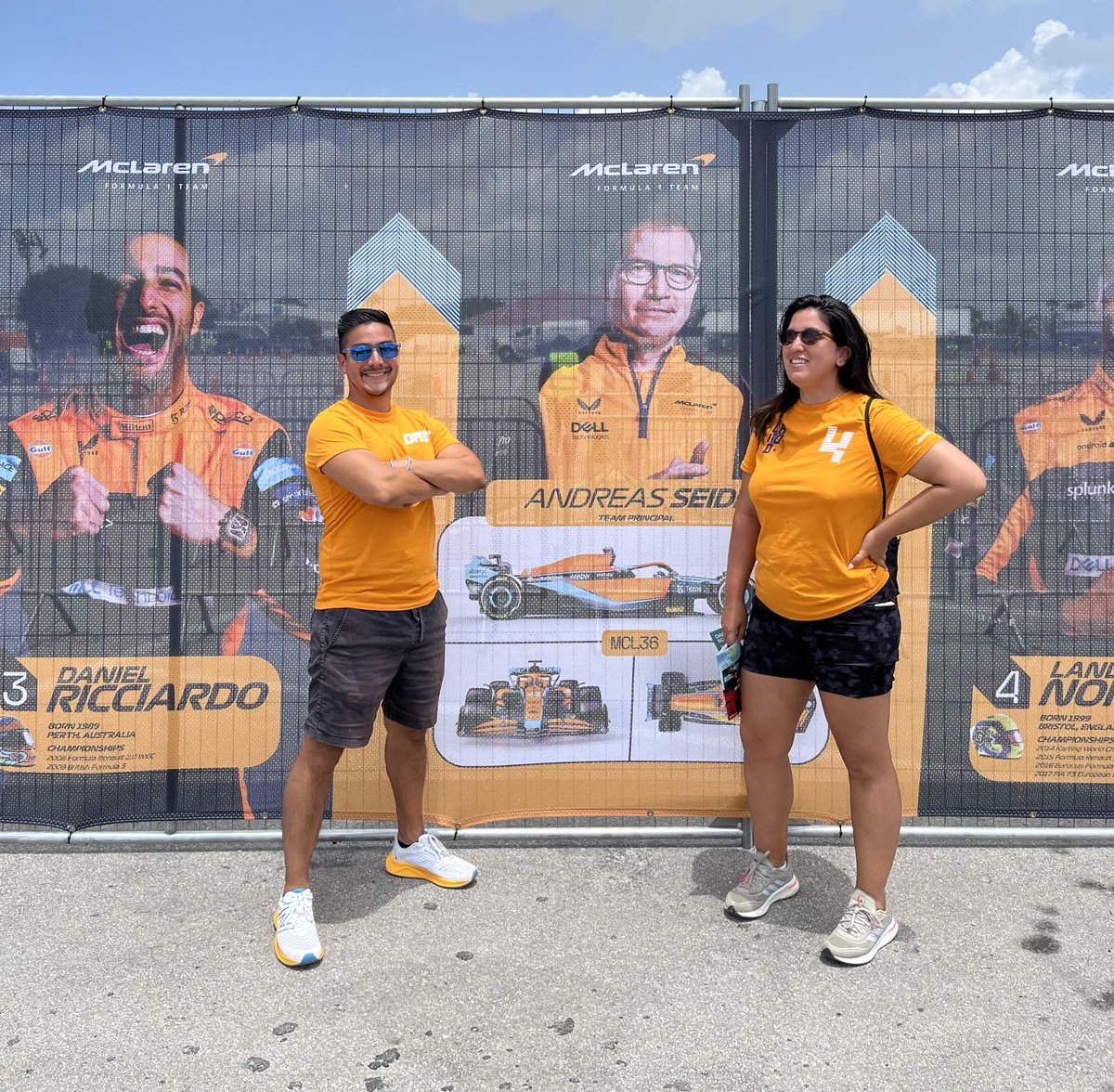 Sadly, we couldn't deliver a result for the multitude in papaya. Emphasising how much everyone was still feeling their way on Sunday, the drivers went for split strategies. Lando went with one group for an early stop, Daniel gutsed it out and went long. Lando was scrapping for a spot at the bottom-end of the top 10 when he made contact with Pierre Gasly. The stewards didn't investigate, both drivers shrugged. Racing incident. 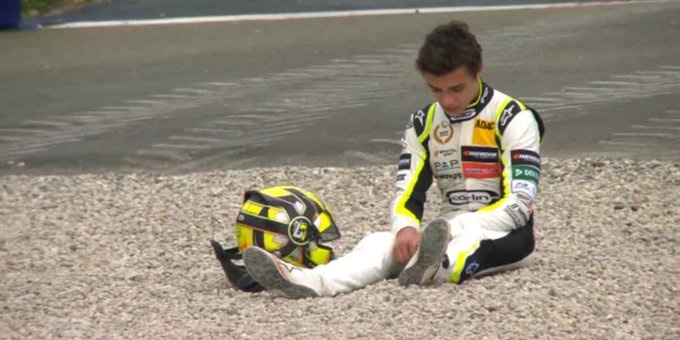 Unfortunately, one gets you two. Lando's DNF gave a free stop to several of the cars Daniel was chasing. He bit the bullet, came in for a second stop and dropped to the back of the pack. He delivered an overtaking masterclass in a chaotic, elbows-out last few laps – but came up just short. And that was that. Our first Miami Grand Prix, no points, gallons of sweat, some excellent memories and an anticipation of quieter, simpler weekends in places like Monaco– but first up, the Circuit de Catalunya. 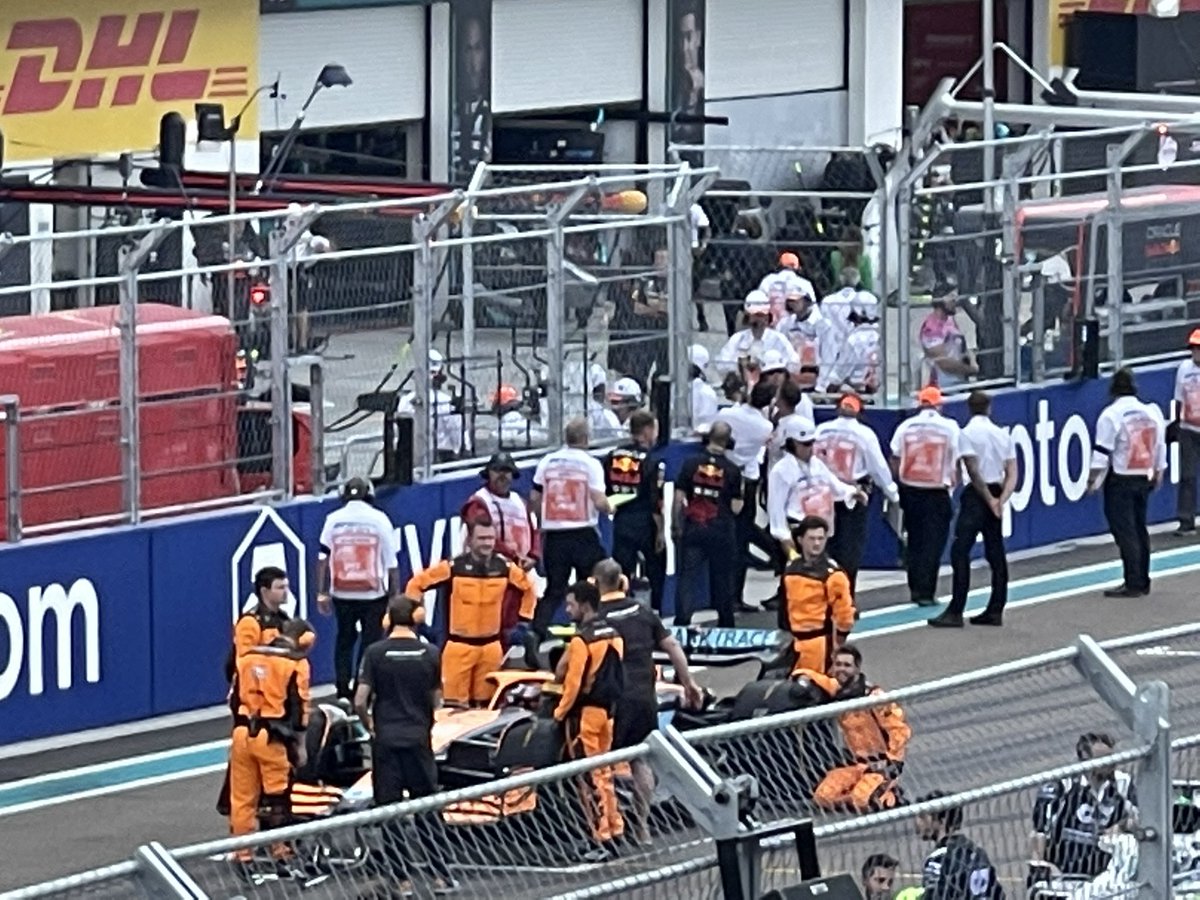 @McLarenF1 @LandoNorris It was my honor to finally cheer you all on in person. Thank you for your effort 🧡 https://t.co/cjxp1C96U8

@McLarenF1 @LandoNorris It was my honor to finally cheer you all on in person. Thank you for your effort 🧡 https://t.co/cjxp1C96U8

@McLarenF1 Gutted for Lando, Daniel pushed really hard to achieve P11 so close to the points, not our day we keep pushing and we keep fighting team #FearlesslyForward

@McLarenF1 😞😞😞
Really tough and gutted...
Nice bit of a recovery from Daniel to finish in P11... just a shame there aren't any points to go with it! But I know you guys will bounce back! https://t.co/pEMMmNcWn7

@McLarenF1 😞😞😞
Really tough and gutted...
Nice bit of a recovery from Daniel to finish in P11... just a shame there aren't any points to go with it! But I know you guys will bounce back! https://t.co/pEMMmNcWn7

@McLarenF1 Definitely not the race we all hoped for Team. Tough race week you all worked incredibly hard and gave it everything as always 🧡🏁👍🧡 Hold your heads high on to Spain we go. #BelieveInMcLaren #FansLikeNoOther #FearlesslyForward #TeamLikeNoOther

The Emilia Romagna Grand Prix according to social media