Multi-coloured shapes moving at speed? Highly addictive? Nail-biting? Hmm… turns out Formula 1 and Tetris may have more in common than we first thought. A fortnight after our unforgettable win at the Italian Grand Prix, we head to the nation that’s home to one of the greatest computer games of all time and the next stop on the 2021 F1 calendar, the Sochi Autodrom. That’s right, folks, it’s time for the Russian Grand Prix and it could be another blockbuster.

“Monza was a special moment for the team that was fully deserved. Being able to celebrate the result with the entire team at the factory last week showed just how much that meant to everyone. A one-two finish is something we can all be proud of. I’m so happy to be a part of this journey that McLaren is on together as a team and see the progress we’re continuing to make.

“We’re not getting carried away as we know it won’t be like this every weekend. We need to continue to put ourselves in the best position possible and maximise the car, pit-stops, strategy and everything in between. Heading into Russia, the battle for third in the Constructors’ is still tight and looks set to stay that way until the last race of the season. Hopefully we can keep the momentum going from Italy and score some solid points for the team.”

“A week on from Monza, it still feels good thinking about being back on that top step of the podium. We couldn’t have asked for a more perfect way to end a triple-header. I loved competing at the front of the grid and having the chance to fight for the win. The one-two finish is a product of hard work throughout the team and from myself. Since the start of my journey with McLaren I’ve been working through the challenges that come with adapting to a new car, but the team has been really supportive throughout. It’s great to have a result that completes that picture, and to have the team back in the winner’s circle has been a ride and I’ve only been a part of it for six months. It’s been the boost we all needed.

“I’ve definitely taken time to enjoy the moment but now it’s time to focus on Russia. I want to build on my Monza performance this weekend and will be pushing to score important points to keep up the fight with our competitors. Sochi can be a tricky circuit to make a move, so it’s important to make the most of qualifying to give us the best chance for points come Sunday.”

“Achieving a one-two finish in Monza meant a lot to each and every member of the team, who have been working incredibly hard over the years. It’s been great to take the time to celebrate the result as a team at MTC last week.

“There’s still a long way to go for us as a team through the remainder of the season. We will continue to keep our feet on the ground and our heads down as the battle in the Constructors’ Championship is still closely contested. Our key priorities remain the same: staying on top of reliability and parts management, extracting the best performance from our car alongside our colleagues at Mercedes HPP, and capitalising on every opportunity that presents itself.

“After a short break following the triple-header, the team is prepared and ready to head to Russia in the hunt for crucial points. The Sochi Autodrom is dominated by two long straights resulting in a high power sensitivity, however, the track presents relatively limited opportunities to overtake. Therefore, it’s key we maximise our results in qualifying to give both cars the best possible chance to fight higher up the grid on Sunday.”

Lando’s best result in Sochi remains P8 in the 2019 edition of the Russian Grand Prix. Coincidentally, he started the race in the same position a year later with aspirations of bettering his 2019 result. However, he was forced to take avoiding action on the opening lap due to an incident ahead of him, leaving him at the back of the field with a mountain to climb.

Similarly to Lando, Russia has not been the happiest of hunting grounds for Daniel since it joined the calendar in 2014. Daniel’s best Russian Grand Prix result to date, a fifth-place finish, did come last year though. He’ll be looking to build on that after his eighth grand prix win a fortnight ago at Monza – something the stats suggest he may well do given that every time Daniel has won a grand prix, he’s always finished P8 or higher in the following race.

Speaking of Monza, the Sochi Autodrom is also a power-sensitive circuit but that’s largely where the similarities end. Wind can be a factor here because the circuit is quite open and flat. In fact, it’s the flattest circuit on the calendar with very little elevation change. Tyre degradation tends to be very low here, partly due to the incredibly smooth asphalt; couple this with a high pit-loss time because of a 60 km/h pit-lane speed limit as opposed to the usual 80 km/h, due to a tricky pit-lane entry, and one-stop strategies are likely to be prevalent. It’s also worth remembering that F1 will be reverting to its traditional race weekend format after another instalment of the sprint qualifying experiment at Monza last time out.

Vodka, space travel, the Red Square, Russia is famous for many things, including dolls. You know, those ones that fit inside each other: they just keep going and going, like the gift that keeps on giving. Well, we’ve got something else that keeps on giving. We’re talking about the Klipsch T5 II True Wireless ANC Earphones, which are packed with features like – deep breath – noise-cancelling tech, built-in gesture control, Bluetooth 5.0, splash resistance, a wireless charging pad for earphones and phone, a carbon fire and Papaya trim, six pairs of oval ear-tips, and more. And, even better, they're now available from the McLaren Store. 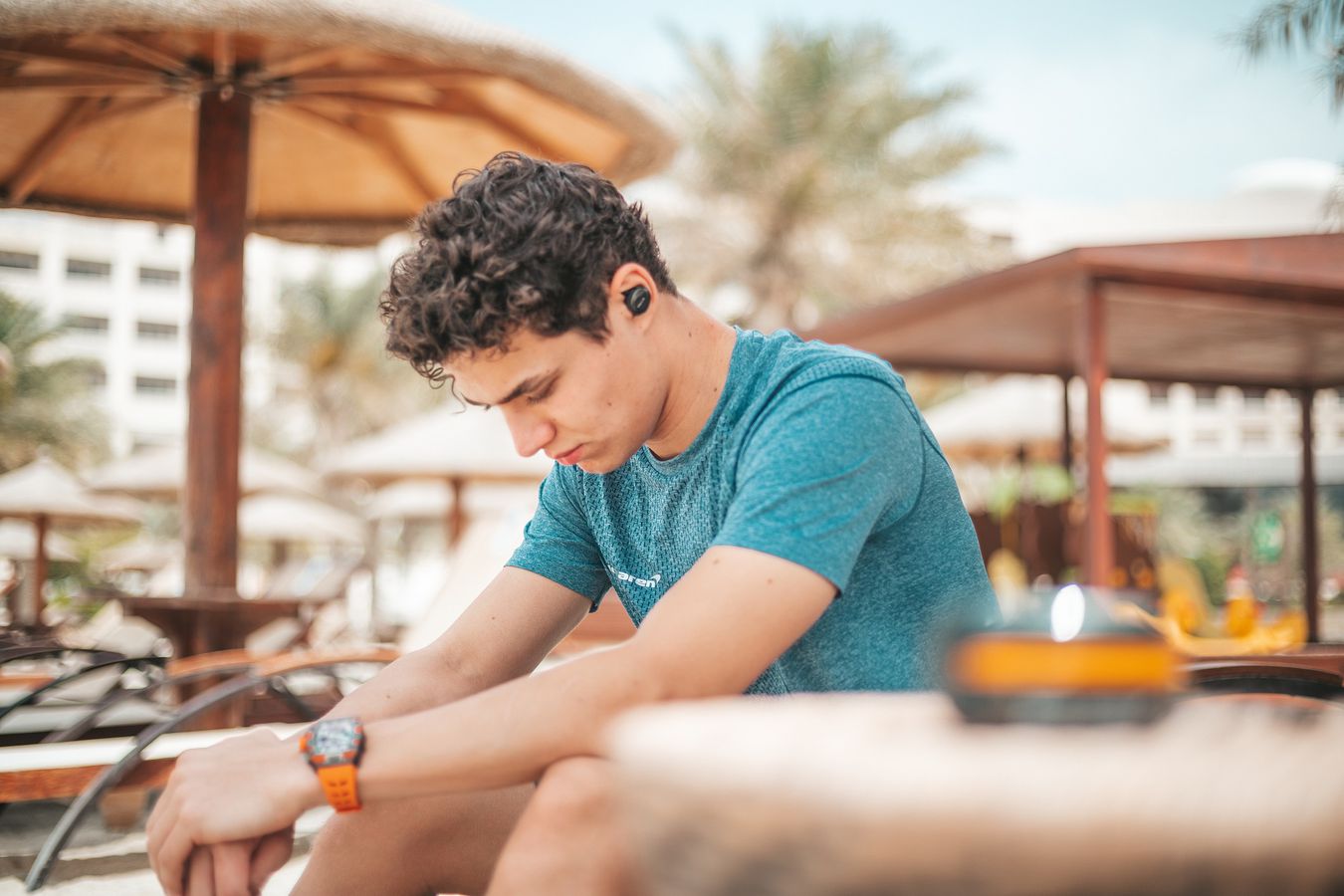 Red, yellow, blue, black, even chequered, Formula 1 is home to all sorts of flags – and that’s before you even get to the ones waved by fans in support of teams and drivers. The question is, can you design one? We’re not looking for a modern take on double-waved yellows or an alternate version of a chequered flag though. Instead, the flag we’ve got in mind is for us. We want you to submit your designs for a brand-new McLaren flag that we can fly proudly at the United States Grand Prix. To get all the details, and a little more inspiration, make sure you sign up for the Webex Fan Briefing that’s going to be hosted by none other than our very own Daniel Ricciardo on 23 September.

Drive the design by Webex

Find out what happened during our team celebration at MTC