A new Formula 1 season means new strategies and, while strategy in the early races doesn’t rely on guesswork, there’s more than a little faith mixed in with the fact. In association with FxPro and with exclusive insight from McLaren F1 Director of Strategy and Sporting Randy Singh, we dissect the season-opening Bahrain Grand Prix.

At the start of an F1 season, the thing strategists crave most is reliable data. Much like a forex trader who knows that information is king when it comes to making successful trades, our strategy group uses data to make the right calls at the right time. In F1, some of this data – mostly that concerning your own car – can be gleaned from testing but the good stuff comes from racing and, in this sense, Bahrain is the motherlode. Whereas the traditional curtain raiser at Albert Park is too eccentric to provide the sort of data you can resolutely trust, the Bahrain International Circuit is much closer to the norm. Not perfect by any stretch of the imagination, but sufficiently representative for the strategists to gain a fairly good understanding of where everyone is on one-lap and long-run pace. Happily, our strategy group did their homework well and the race fitted into a pattern they expected – albeit with a few moments of drama and doubt.

• A grand prix dominated by pace, rather than track position
• Higher than average degradation creates conditions for a rare two-stopper
• All three tyre compounds in play
• Balancing the race on track with the race against an out-of-position Pérez
• Working with very little empirical data

While the cars and tyre constructions are both different for 2021, the Bahrain International Circuit hasn’t changed and nor has Pirelli’s allocation of compounds, so no one was expecting the strategy to deviate from that used – first-lap red flag notwithstanding – last year. It looked very much like a two-stop race barring the intervention of Safety Cars.

All three tyre compounds were in play, and both Lando and Daniel attempted to qualify on the yellow-banded C3 but couldn’t quite make it stick with their first runs, and subsequently we opted to play it safe with a Soft tyre for their second runs in Q2. Thus, both drivers started the race on a used Soft tyre. They each also had available one new Hard, one new Medium, one used Medium and three more sets of used Softs. Within that allocation, most permutations of a two-stopper were available. At many circuits, the choices will be dictated by the demands of track position versus rivals – but at the Bahrain International Circuit, it’s mostly about choosing the fastest way to the finish.

“In Bahrain, the tyre degradation is above average, and because the overtaking is a little bit easier than the average, what tends to happen is that people run races that are more race time dominated,” says Randy. “You race a little bit more like you’re driving by yourself. If someone undercuts you – or you undercut someone else – that’s not necessarily a permanent thing. You can build up a big pace delta by having a difference in tyre age and you can pass. There are still tactical elements– especially around the first stop – but this race was one of the more deterministic races, based around getting to the flag quickly rather than focussing too much on track position.”

Strategic choices are built around the requirements of attack or defence. After qualifying and starting well – passing Daniel on the opening lap, Pierre Gasly on lap four and Charles Leclerc on lap nine – Lando’s strategy in P4 was firmly focussed on safeguarding his position against the cars behind. With Leclerc trailing him by only 1.4s at the end of lap 11, the undercut was a distinct possibility. Fernando Alonso, from the back of the group in P7 was the first driver to pit, and we followed him in with Lando the next lap, securing his position against an undercut.

“We boxed with Lando to protect against Charles. It seemed like the right thing to do,” says Randy. “The first stops were timed because we expected other people to pit. We obviously didn’t want to lose a position to Alonso, but really why we boxed at that stage was because we knew Alonso boxing was likely to drag-in Charles. It dragged-in Lance Stroll as well. These stops were a little bit more about track position because we knew we’d lose two or three spots if we didn’t stop.” 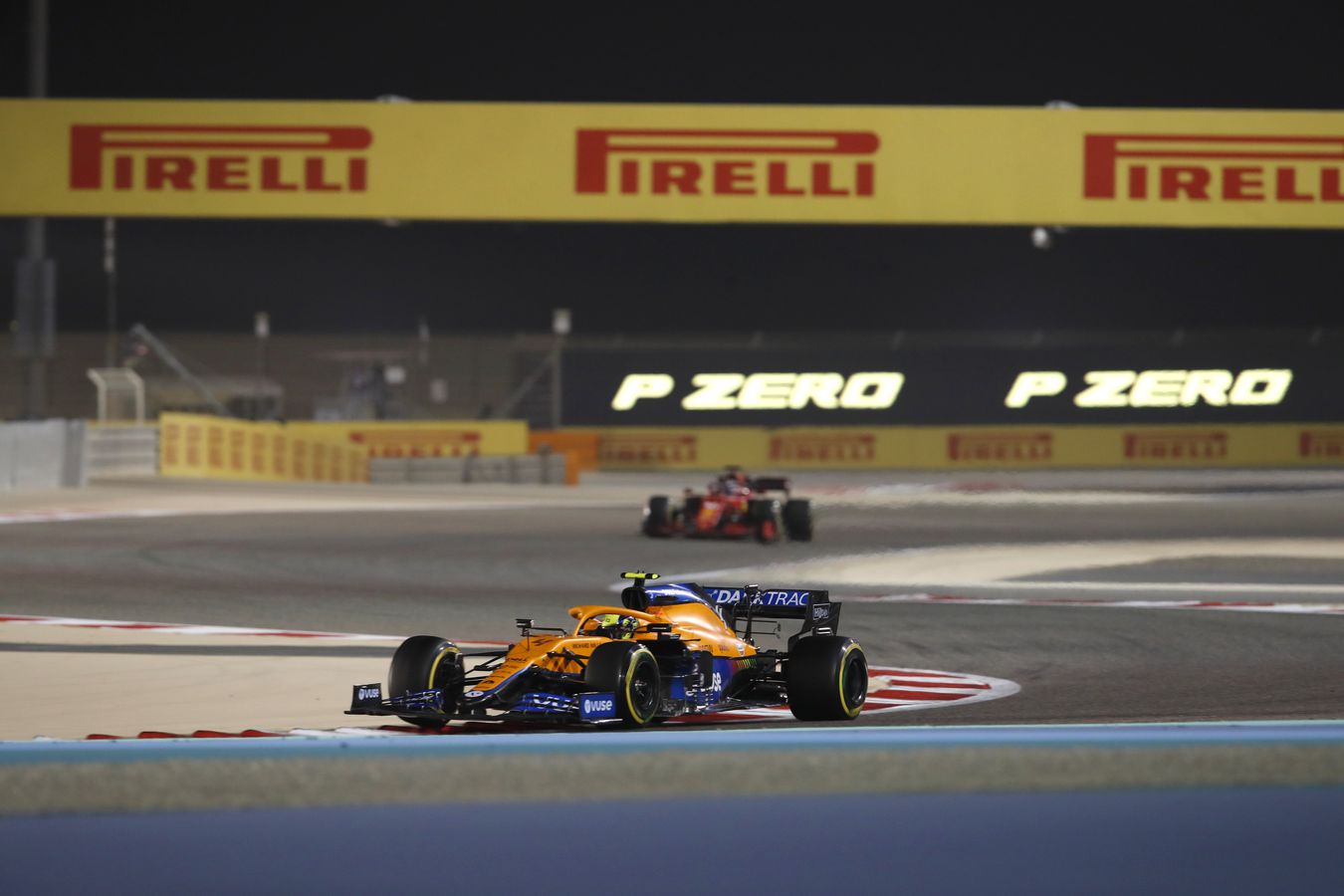 Following the stops, Sergio ‘Checo’ Pérez in the out-of-position Red Bull posed a potential threat, but once he pitted on lap 19 – too early to realistically make a one-stop race work – Lando’s race was about staying ahead of Leclerc. He built up a four-second gap to guard against the undercut, then waited until a lap after Leclerc pitted to make his second stop, emerging with his track position intact. He kept the pace up in the final stint to ensure he maintained a comfortable margin over Leclerc, while keeping a watchful eye on the pace of Pérez.

“On Lando’s side, we boxed a lap later than Daniel but that was really just a coincidence,” says Randy. “We boxed to cover Charles and, with a good margin, there was no point pushing that. Charles had boxed to undercut and we were comfortable with the tyres to the end of the race, so it was a good time for us to pit there as well. It wasn’t too far from what we would have wanted to do ideally, racing by ourselves.”

Daniel’s race was more involved. He made his first stop a lap after Lando to defend against an undercut, but found himself behind Alonso who had triggered the cascade. The team told Daniel not to worry about the Spaniard – who had to take a huge amount out of his tyres on his out-lap to make up ground – and Daniel duly took the place back and set about chasing down Leclerc, though the Monegasque driver seemed able to maintain a five-second gap through most of the stint.

Daniel was also, at this point, in a race with an out-of-position, out-of-sequence Pérez. His best chance of being able to fight the rapid Red Bull driver was to stay ahead for as long as possible at this stage of the race – but not lose any time defending against Pérez, to ensure he had a margin after the Mexican made a later second stop after a long middle stint on the Hard tyre. Thus, Daniel stayed out until he was passed by Pérez and then pitted immediately, following Leclerc into the pitlane. 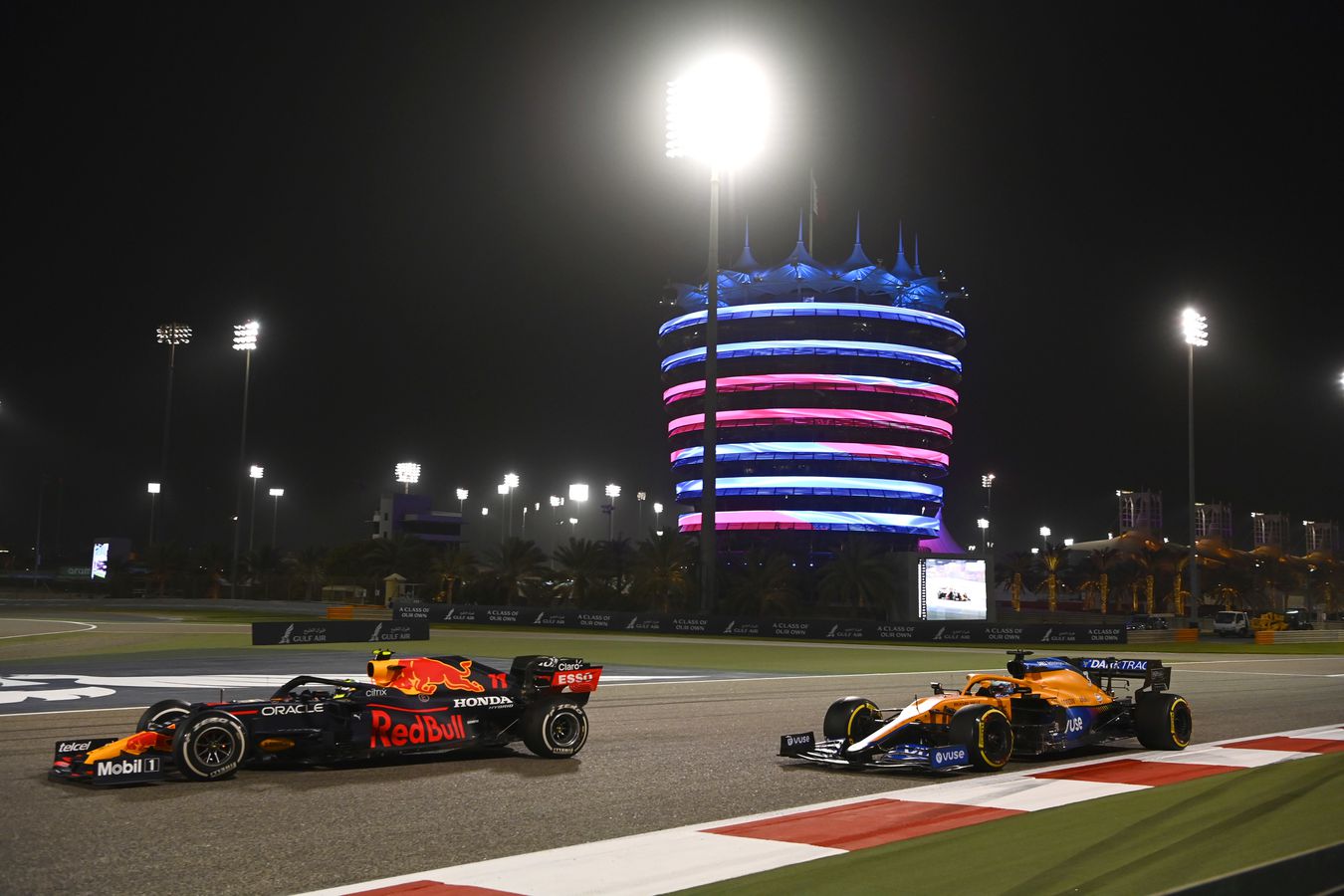 “Checo was obviously going to be in a different race to us after he had the incident on the formation lap – so we weren’t necessarily racing him directly but we were biasing our race to try to beat him,” says Randy. “It was quite clear to us that he would be a consideration – but likely not until later in the race. So, for us, the way to counter that is to run a more balanced strategy. We expected him to catch us in the final stint, so we wanted to make sure we were quick in that stint to protect against him.

“A combination of things made us bring Daniel in. You want to get a lot out of that middle stint, so that the final stint can be a bit shorter. That way, when Checo catches you, you have a good chance of defending. With hindsight, Checo was quick enough that he easily got past Daniel irrespective – but we should always maximise those chances. Once we were passed by Checo, it was clear we wouldn’t be able to hold him up – and then we wanted to pit to cover the Aston Martin of Vettel. It wasn’t a big consideration – but there wasn’t any reason to not do it.”

Floor damage from an earlier clash with Gasly seriously hampered Daniel performance on his final set of tyres, and he couldn’t overhaul Leclerc. He was soon caught by a later-stopping Pérez and ceded P6, with the hope of being able to use the DRS to follow Pérez and roll-up to Leclerc – but he couldn't stay with the faster Red Bull and soon dropped back. Towards the end of the race, Daniel’s main concern was staying ahead of Sainz in the second Ferrari. He eked-out what tyre life he had, crossing the line 1.1s ahead of his pursuer.

"We had the third-quickest car today, but we acknowledge there's going to be a tense battle"