Full-on, flat-out and incredibly tense. In association with FxPro, and with the help of McLaren F1 Head of Strategy and Sporting Randy Singh, we reveal why the Spanish Grand Prix was one of this season’s toughest strategic challenges and the thinking behind the decisions that defined our race.

There isn’t really such a thing as an easy race for strategists – but there certainly are tough ones. The 2020 Spanish Grand Prix fell into the latter category, with all the things that occupy their attention happening simultaneously – much like thousands of forex orders being executed at the same time by FxPro.

McLaren F1 drivers Carlos Sainz and Lando Norris were involved in different battles, with opportunities ahead and threats from behind, various strategies in play, blue flags to contend with, a chance of bad weather and, on a circuit where overtaking is difficult and track position has primacy, a revolving cast of backmarkers representing a risk whenever a pit-stop was contemplated. In the final analysis, both Carlos and Lando ran something close to a standard two-stop race – but an awful lot of scrutiny and decision-making went on behind the scenes to reach that point.

The weather at the Circuit de Barcelona-Catalunya was stable across the weekend, and Friday’s running gave some excellent pointers to a possible race strategy. The Hard tyre was generally unpopular but both the Medium and Soft, despite track temperatures north of 50°C, seemed capable of a long stint with none of the blistering and little of the graining seen at Silverstone. For the top 10, all starting on a Used Soft tyre, this made the two-stop race the favourite strategy, with the one-stop a riskier proposition. Those starting behind, with a choice of starting tyre, had greater potential to make the one-stop work – but also a strong likelihood of becoming pivotal in the faster two-stoppers’ afternoons.

Pirelli’s predictions – based purely on lap time, without the potential to become entangled in traffic – suggested Soft>Medium>Soft was the fastest way to the flag but, intriguingly, a three-stop Soft>Medium>Soft>Soft strategy wasn’t far behind, and comparable to a Soft>Medium>Medium race. We, as is often the case, saw things slightly differently.

Having qualified for Q3, both drivers were obliged to start the race on their fastest tyre from Q2, which in both cases was a Soft. Carlos ran that for 22 laps, pitted for another Used Soft and ran that for 19 laps before coming in for the final time on lap 41, to take a New Medium tyre to the flag. Lando ran a very similar strategy: he pitted on lap 21 for his second Used Soft tyre, and kept that for 23 laps, pitting on lap 44, then swapping to a New Medium that took him to the flag.

While strategy always has a degree of fluidity, everything from practice suggested a two-stop race was the optimum, staying away from the Hard tyre. “Track-position is so important at this race that the three-stop never really came into it. It even made the two-stop seem slightly negative, and we were conscious some people might try to use a one-stop strategy,” explains Randy.

Lando had a good launch but found himself boxed out at Turn One and dropped from P8 to P10. Through the first stint, he gained a measure of security against the undercut by pulling out a gap over Sebastian Vettel who was in P11.

Lando’s immediate targets were the two cars that passed him into Turn One: Pierre Gasly, up to P8 and Charles Leclerc, up to P9. In the early stages of the race he dropped back from them a little to look after his tyres, with a view to attacking at the end of the stint. Once that pair started fighting, Lando made his first stop.

“When cars are fighting, they’re losing time,” says Randy. “Lando had closed-up on Leclerc and Gasly by that point and so we went aggressive to try to the undercut. It didn’t work on Gasly, who boxed right in front of us, but we managed to undercut Leclerc.”

A memorable battle between Lando and Leclerc was unfortunately, for neutral supporters, cut short when Leclerc spun and retired. This left Lando without an immediate threat from behind – but caught in a train behind Gasly and Albon.

“On Lando’s side, we got stuck,” says Randy. “In that middle stint, we were trying to find the way to get past Gasly and Albon and decided the best approach was a relatively short middle stint, boxing to overtake – but Gasly boxed first, so we elected to stay out.”

Lando thus went into the final stint with a slight tyre advantage but the prospect of a hard chase much interrupted by blue flags. He attempted to use this to his advantage but could never quite get alongside Gasly into Turn One. Both had fallen behind a one-stopping Vettel, and thus Lando completed the race where he had finished the first lap, in P10.

Carlos’ home race was rather more successful. He held P7 at the start and was content to follow Albon through the first stint, while building a small gap over the chasing Gasly. Although Carlos wasn’t right on Albon’s tail, he was close enough to present a threat, so Albon was the first of the top 10 to box, pitting on lap 17 and falling back into traffic. Carlos’ attention then switched to defending against Gasly.

“Initially, Carlos fell back from the Racing Points and Albon, but then Albon started to come back towards him,” explains Randy. “Red Bull decided to pit Albon when Carlos became close enough to try an undercut – we would certainly have thought about it – and they pitted him into traffic. 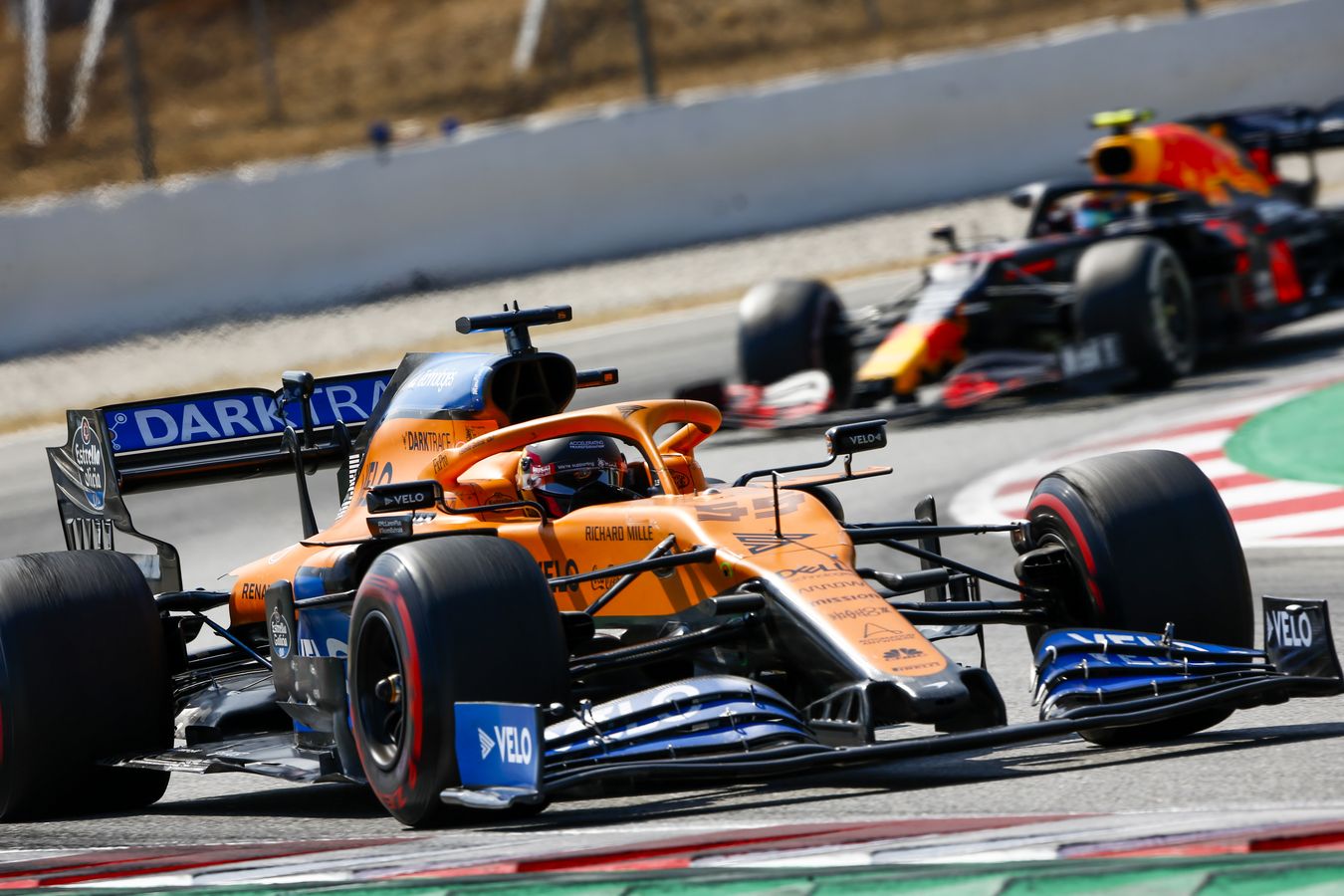 “After that, our decision point came when Gasly boxed. We had to decide whether we wanted to cover him or stay out. We decided to cover, and pitted the next lap, coming out ahead of Gasly – and just behind Albon, Esteban Ocon and Kevin Magnussen. They were in a train and it wasn’t an ideal position – but we made sure we didn’t lose position to Gasly, and we would have, had we stayed out longer.”

As was the case for Lando, traffic in the middle stint presented difficulties for Carlos. He passed Ocon on track and slowly gained places back as the one-stoppers pitted off ahead. We managed to briefly undercut Sergio Pérez before the latter used his pace advantage and fresh tyres to take the place back. Heading towards the final stop, Carlos’ immediate rivals were the Racing Points and Albon – plus a likely one-stopping Vettel some way back up the road.

“Once Carlos had cleared the traffic he got caught behind Pérez,” adds Randy. “We had Albon coming up behind us, who was definitely a risk. We wanted to attack the Racing Points and protect against Albon, so we pitted and managed to get out close to Albon and pass him. Racing Point couldn’t cover us with both cars and elected to pit Stroll. He came out behind us but got back past Carlos because we weren’t quick enough to hold the position.”

The end of Carlos’ race saw him run an attacking stint, catching and overtaking Vettel for P6 before setting off after the Racing Points, particularly Pérez, who was now on a one-stop strategy and also had a five-second time penalty. Carlos was a little unlucky to finish up a couple of seconds outside Pérez’s penalty margin. He had to take one more blue flag than the Racing Point driver, which proved crucial – but also the MCL35 didn’t quite have the pace to make the chase effective – however a net gain of a place left us relatively satisfied after a tough weekend in Barcelona.

How we kept it cool at the Spanish GP

"We want to use this momentum, keep pushing and further develop the car"