Formula 1 is back! After 217 days since the curtain fell on the 2019 season in Abu Dhabi, we’re finally going racing again. Here’s what you need to know before the lights go out next week…

Okay, okay. Let’s just remind ourselves of where we got to before, well, you know what. Less than two weeks before arriving in Melbourne in March, for what we all expected to be the 2020 season-opener, we had completed a fortnight of pre-season testing at the Circuit de Barcelona-Catalunya with our drivers Carlos Sainz and Lando Norris behind the wheel of our brand-new car: the very slim, very svelte, very papaya and – for the first time ever – very matte MCL35.

Having racked up a total of 2,320 miles, McLaren F1 Team Principal Andreas Seidl concluded: “This test has been the best for McLaren for some time, with strong reliability enabling us to complete our programme as planned and collect valuable information for analysis.” Mileage and reliability aside, the competitive order, particularly the midfield, looks even closer than 2019 and we can expect a fierce battle from the outset. 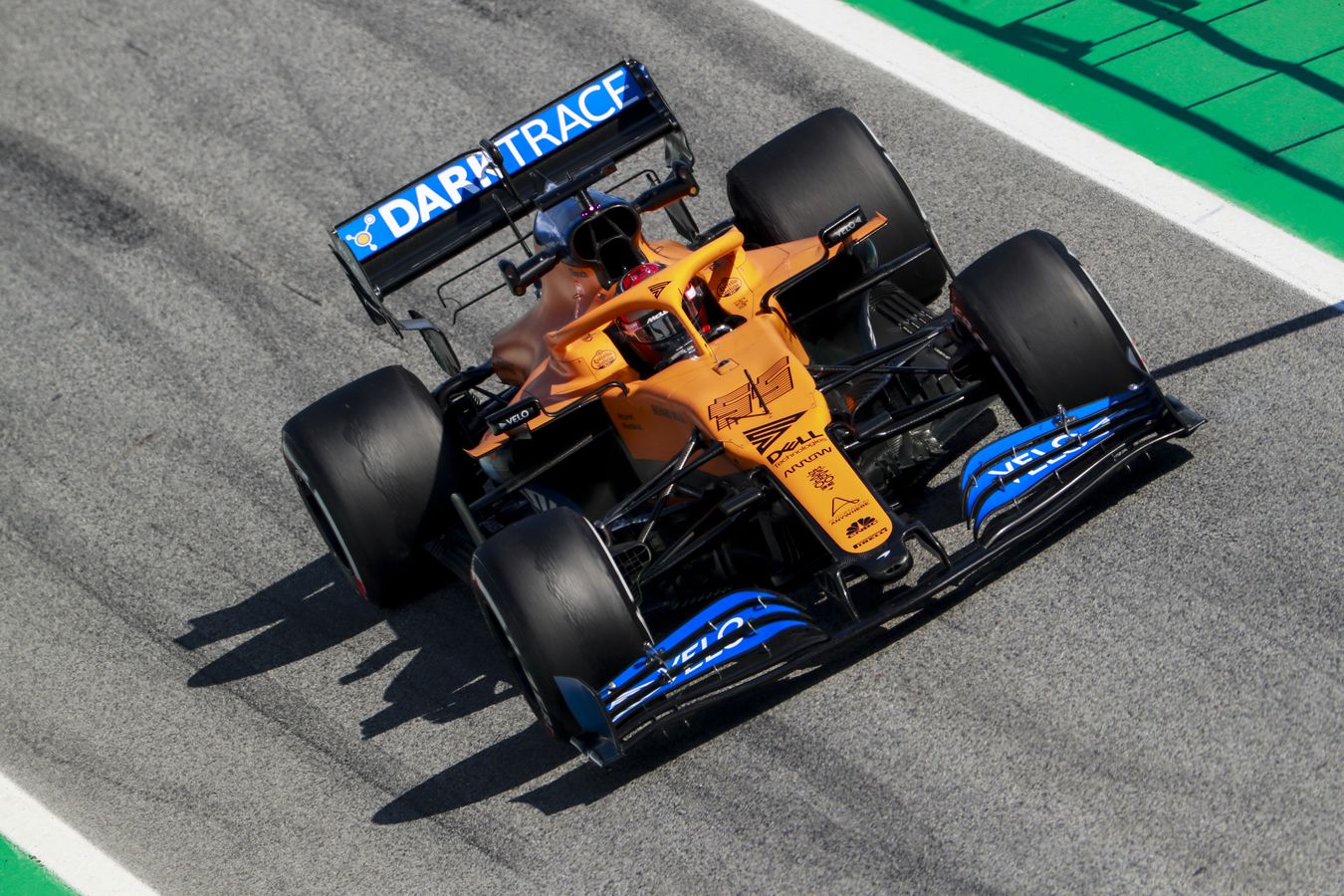 2 | The schedule is unrelenting

Eight races in 10 weeks; two triple-headers and a double. And that’s just the start. The F1 season has never been concentrated into such a short space of time. And while only the first eight races have been confirmed, barring a second significant wave of covid-19, there will be no let-up until the campaign’s likely conclusion in mid-December.

The races will come thick and fast and that’s music to all our ears given the recent impromptu hiatus, but you can be certain the fitness and fatigue levels of everyone in the team, both at the track and back at the McLaren Technology Centre, will be sorely tested. 2018 was the last time we had a triple-header and the first since the championship’s inception in 1950. So expect some tense moments ahead.

As F1 seeks to pack in as many races while overcoming the logistical challenges of this post-lockdown world, we’re going to find ourselves becoming very well acquainted with certain locations. The season will kick-off with the Austrian Grand Prix and next up will be the Styrian Grand Prix – or the 'Formula 1 Pirelli Grosser Preis Der Steiermark 2020' to use its official name. But don’t let the name of the latter fool you, we’ll still be racing around the Red Bull Ring. Fast forward a month and it’s Silverstone’s turn to double up. We’ll have the British Grand Prix, followed by the 70th Anniversary Grand Prix.

And don’t fall into the trap of assuming the races will be carbon copies of each other. F1 teams’ thirst for knowledge is unquenchable and it’s going to be fascinating to see how we fare once we’re armed with all the data from the previous weekend. There will be added spice courtesy of different tyre allocations at Silverstone and this should shake-up race strategies. Teams will use the hardest three compounds – the white-walled C1 (Hard), yellow-walled C2 (Medium) and red-walled C3 (Soft) – for the first race, whereas a week later the tyre allocation goes a step softer with only C2, C3 and C4 available. 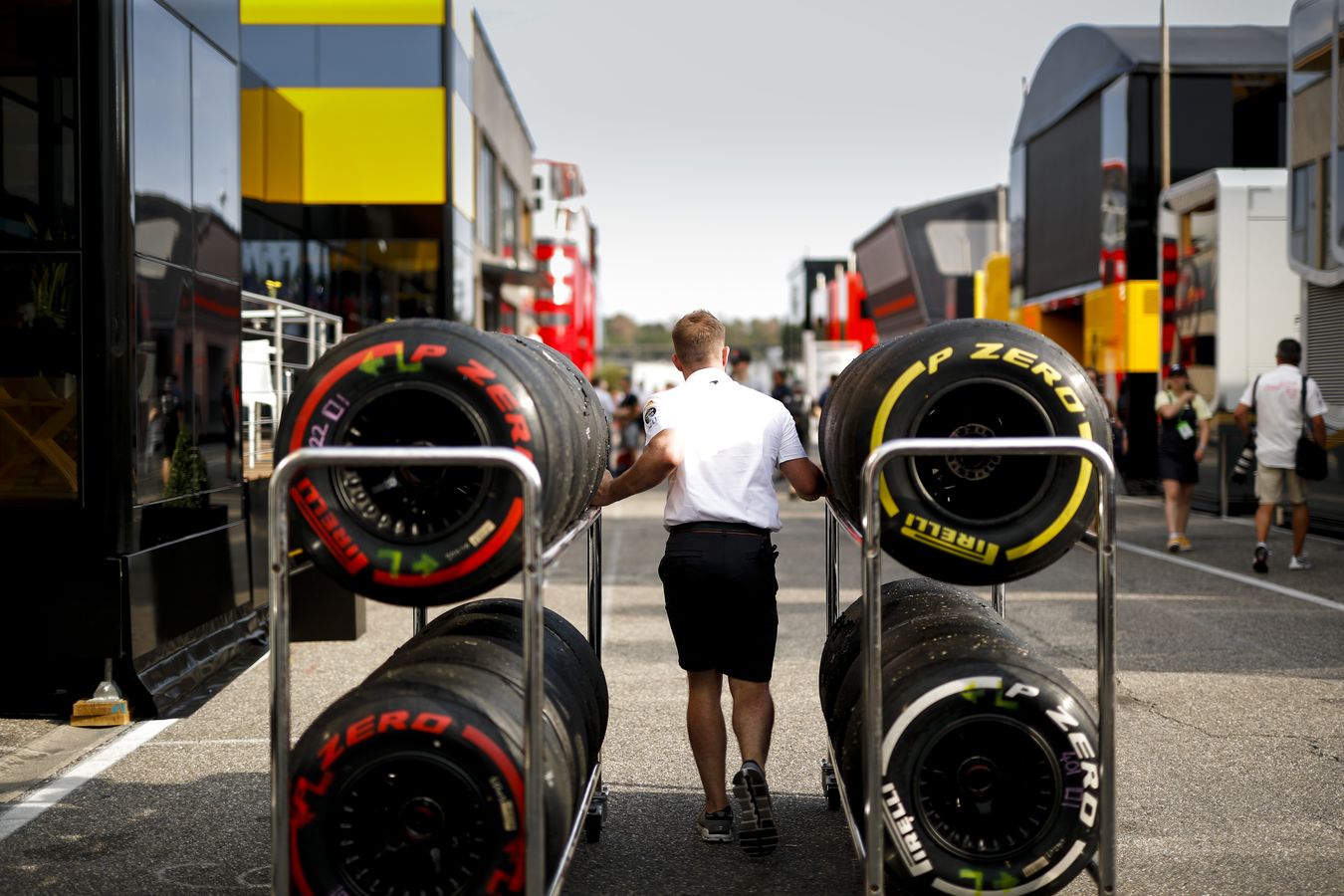 Before covid-19 became a pandemic, F1 was heading for its longest-ever campaign, with a record-breaking 22 races on the original calendar. Now, that number looks unlikely. But if we do fall a little short of that tally – even if we only complete the first eight confirmed races in the revised calendar – we’ll have a bona fide world championship on our hands, as the rules stipulate only eight races must be held for a season to qualify as a legitimate championship campaign.

5 | The racing will be behind closed doors, for now…

Unsurprisingly, the opening races will be closed events to minimise the spread of covid-19, but the hope is that fans, guests and partners will be able to attend later in the season when it is safe to do so. Only essential personnel will be in attendance – a maximum of 80 per team – and that’s only after they have been tested for covid-19 and produced a negative result before travelling. They will travel in strict ‘social bubbles’ through the use of charter flights and private transfers, and stay in specific accommodation.

Once at the circuit, everyone will be wearing face masks and personnel can expect regular testing and screening, with teams isolating from each other and adhering to social distancing measures. Driver briefings may take place outside if a large enough room cannot be found. Meanwhile, only select media will be allowed on site to cover the event and the remaining members of press that do attend will carry out interviews via teleconference. You can also wave goodbye to the drivers’ parade – drivers will be interviewed one-by-one during the pre-race build-up instead – and the traditional podium ceremony. The grid procedure will look different too, with only the minimum amount of people required to start the cars allowed on the grid. 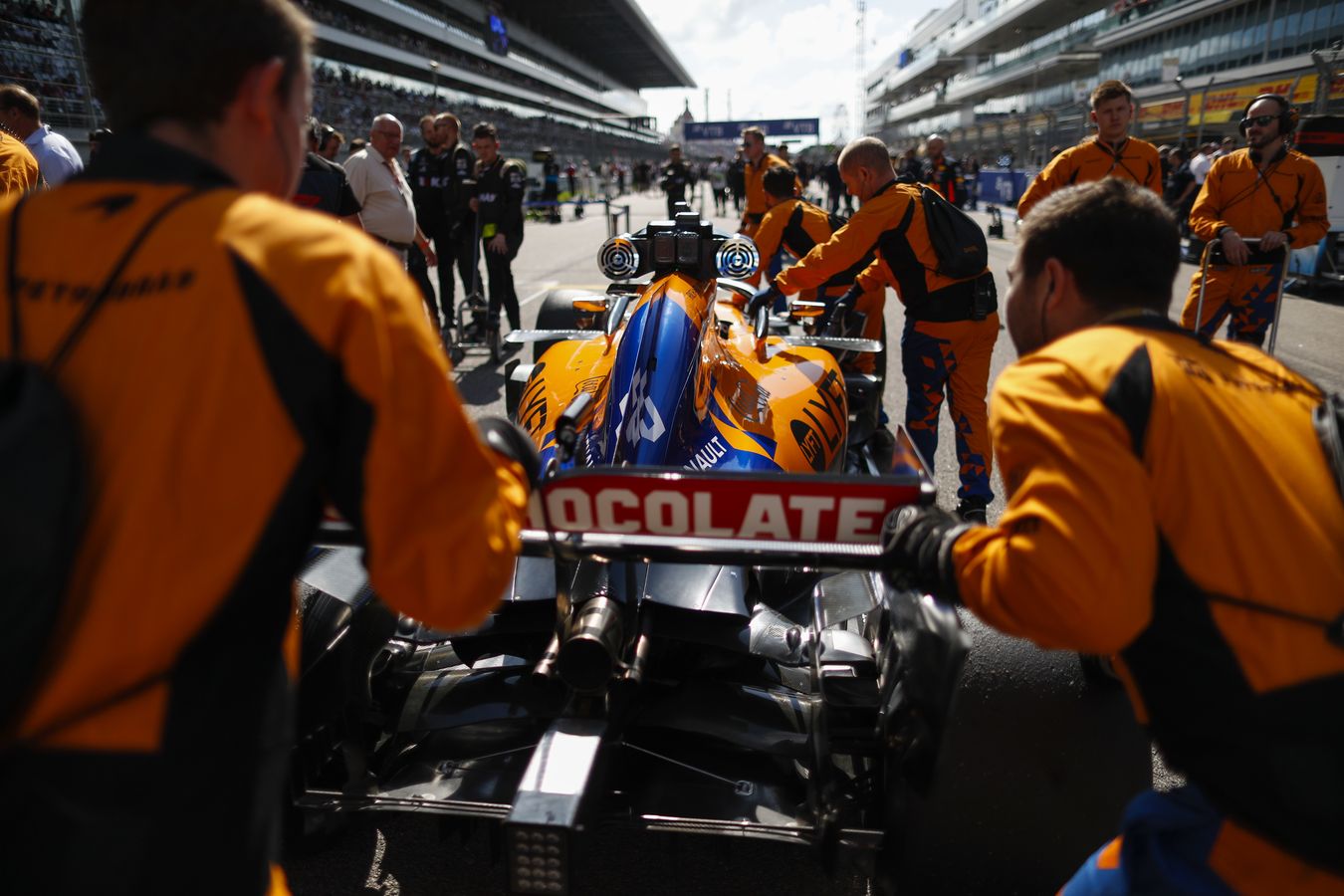 6 | But you can still be part of the action

That’s right, you may not be able to attend any races just yet, but we’re going to get you as close to the team as possible from the comfort of your own home. For starters, show your support on social and use the hashtag #FansLikeNoOther for your chance to feature across our channels. Not only that, but we’ll get you in the garage too – digitally that is. We want the atmosphere in the McLaren garage to be absolutely buzzing, so we’re going to fill the garage screens with photos of fans showing their support from home.

We’re also using our digital wizardry to give you exclusive access to the team through the McLaren App. It’s your must-have companion for the season and the easiest way to keep up to date with everything that’s going on at the track, with insight from the drivers, real-time commentary during every on-track session, and the chance for you to go behind the scenes at race weekends.

We’re right behind Formula 1’s #WeRaceAsOne campaign which means that, along with celebrating the return to racing, we’re using it as an opportunity to raise funds for charities responding to covid-19 and its effects. The halo on the MCL35s, as well as the race suits of Carlos and Lando, will sport rainbow colours – in keeping with the universal symbol of unity, solidarity and hope during the coronavirus crisis.

We’re also recognising key workers tackling the virus across the world and that includes you, our fans. We want to shine a light on your amazing efforts in the response to the virus, so post a short video on social with the hashtag #FansLikeNoOther explaining how you’ve played your part, and we’ll post a select number of stories across McLaren’s channels.

Don’t forget to check out the #WeRaceAsOne merchandise range on the McLaren Store and get your hands on the We Race As One Fan Bundle. It’s packed with Carlos and Lando stickers and face masks, wearable paper helmets for you to make at home, special edition pin badges, and even a fisheye camera lens to help you show off your new items. It’s the sure-fire way to be ready for the return to racing and, even better, all the profits go to charity. 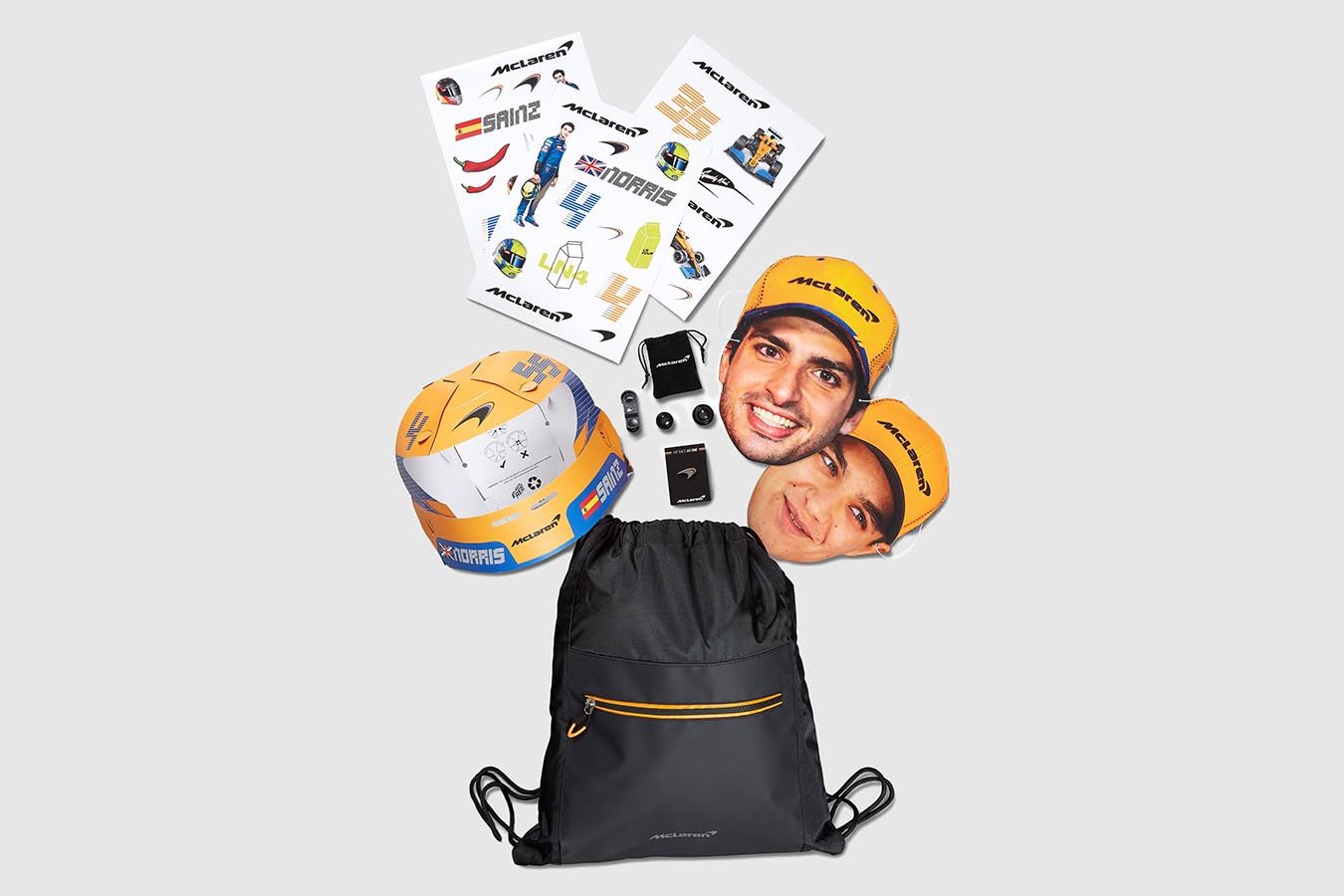 8 | The knock-on effect for next season

The delayed start to this season has had a knock-on effect for F1’s new and eagerly anticipated sporting and technical regulations. Originally slated for 2021, they have been pushed back to 2022 and all teams have agreed to retain the current regulations for next season for cost-saving and practicality reasons. Furthermore, a ban has been imposed to prevent teams from developing their 2022 chassis this year – eliminating the tricky balancing act of developing this year’s car while designing and building a completely new car for ’21. Teams will need to use this year’s chassis in 2021 and the carry-over of designs into next year will be managed by a token system that will freeze the design of some parts.

We’re also looking at a later finish to the 2020 campaign. Given the fluidity of the situation, saying exactly when and where the final race of the season will take place is still tricky at this stage. However, all being well, the season could reach its conclusion in December at Yas Marina Circuit in Abu Dhabi. When you consider the traditional curtain-raiser, the Australian Grand Prix, takes place early to mid-March, teams will probably have no more than three months to be ready for the start of the 2021 season – a far cry from the seven-month wait we’ve endured this time around.