After a few lean years, McLaren began to gather momentum during 1997, as its partnership with Mercedes gelled and drivers Mika Hakkinen and David Coulthard proved to be regular frontrunners. That trend continued into 1998, when Hakkinen emerged as a title contender – and the man most likely to deprive Michael Schumacher and Ferrari of their first championship together.

Mika got the season off to a flying start, taking the MP4/13 to wins in Australia, Brazil, Spain and Monaco, while team-mate Coulthard gave the team another early-season victory at Imola. Schumacher was also on top form, posting three wins of his own in Argentina, Canada and France. The latter marked the mid-point of the 1998 campaign, and it saw Hakkinen head to the next race at Silverstone with a 50 - 44 point lead over his German rival.

Every race mattered, but Silverstone was a special one for Mika. He’d done a lot of racing there earlier in his career, and it was of course the home race for his team. McLaren had not won at Silverstone since Alain Prost triumphed with Honda power back in 1989, and another success was long overdue, especially after a frustrating engine failure for Mika in 1997.

Mika was fastest in pre-event testing, and, come the race weekend he was again the man setting the pace, duly taking pole – but it was close, for part way through his final run, Schumacher was 0.001s up, before he locked a brake at the Abbey chicane. He ended up half a second shy of his rival, while Mika’s team-mate Coulthard was fourth, behind Eddie Irvine’s Ferrari.

On Sunday fans awoke to heavy rain. The race morning warm-up saw the McLarens flying, with Coulthard ahead of Hakkinen, and Schumacher – acknowledged as a wet weather ace – some way back in fifth. 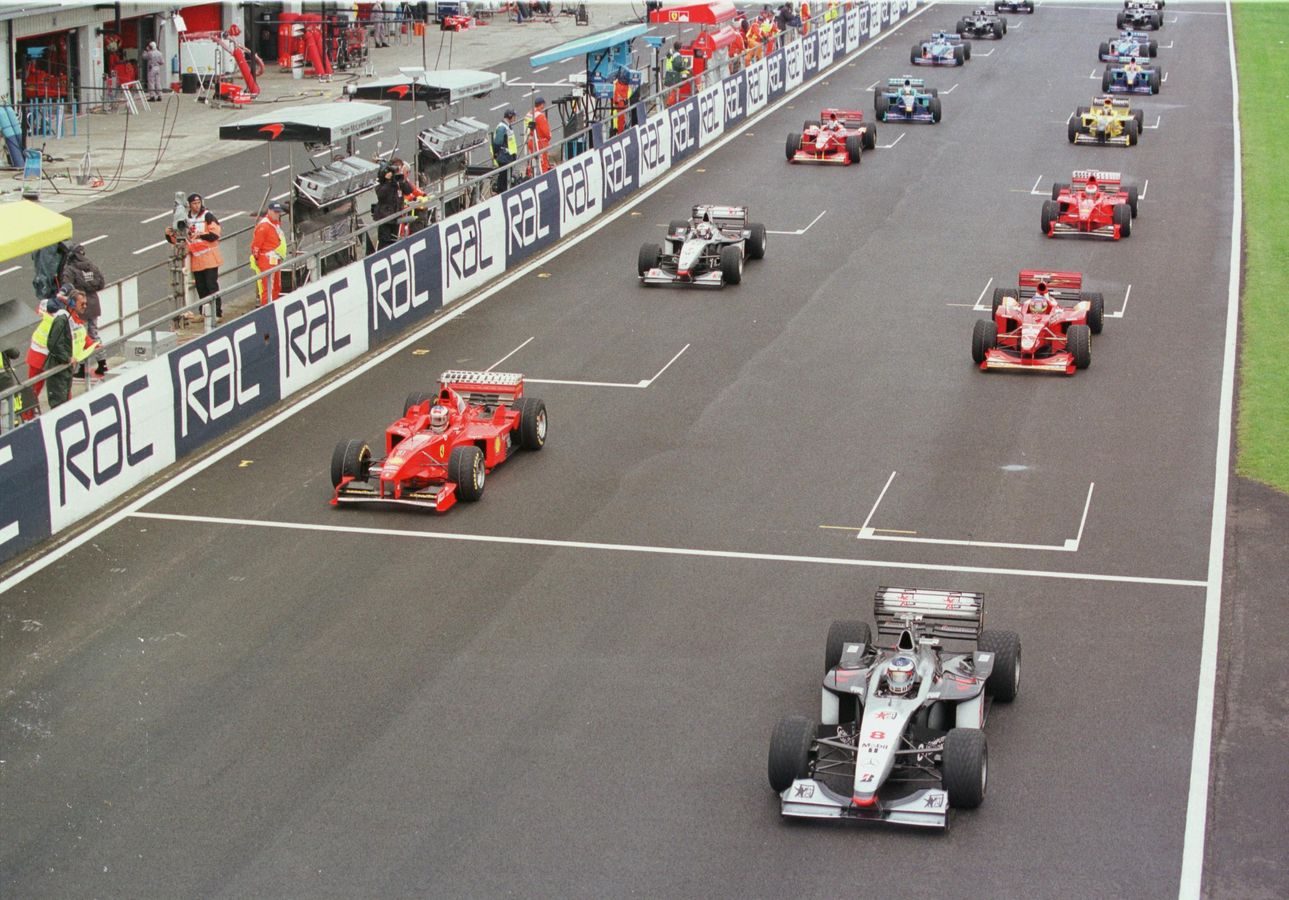 The track was still wet in the afternoon, and Hakkinen made a good start from the front row, maintaining his lead ahead of Schumacher and Coulthard. After a few laps rain began to fall again, and on lap five Coulthard nipped ahead of Schumacher at Abbey to take second place. Just 10 laps into the race, Mika was 10 seconds clear of third placed Schumacher, and it looked like being McLaren’s day.

As the rain continued, the first round of pit-stops began. Schumacher stopped for a new set of Intermediates, dropping as much as 21 seconds behind leader Hakkinen. Coulthard also stopped for Inters, but when Mika came in, the rain had intensified, so he went for Full Wets.

Coulthard then began to close in on his team-mate. But conditions were changing all the time, and while trying to lap Giancarlo Fisichella David spun into the Abbey gravel and instant retirement.

After the subsequent second round of pit-stops, Mika still had a huge advantage over Schumacher, and he was driving superbly. But when the rain became heavier once again he spun off at Bridge, splashing through huge puddles as he skated across the grass. He managed to get back onto the track, having not only lost time but also damaged a front wing endplate and the floor.

He still had an advantage over Schumacher, but then the Safety Car was dispatched, and his hard won lead disappeared. At the restart the Ferrari was right with him, and fighting a car that was now not handling well, he understeered off at Becketts, handing the lead to his rival.

Then came more drama. Just before the Safety Car appeared, Schumacher had overtaken another car under yellow flags, and he was now subject to a 10-second stop-and-go penalty – but there was some confusion over how and when it was to be applied. Bizarrely Michael came into the pit-lane on the last lap, crossed the finish line 22 seconds ahead of Hakkinen, and then took the penalty at the Ferrari pit – after he’d finished the race! 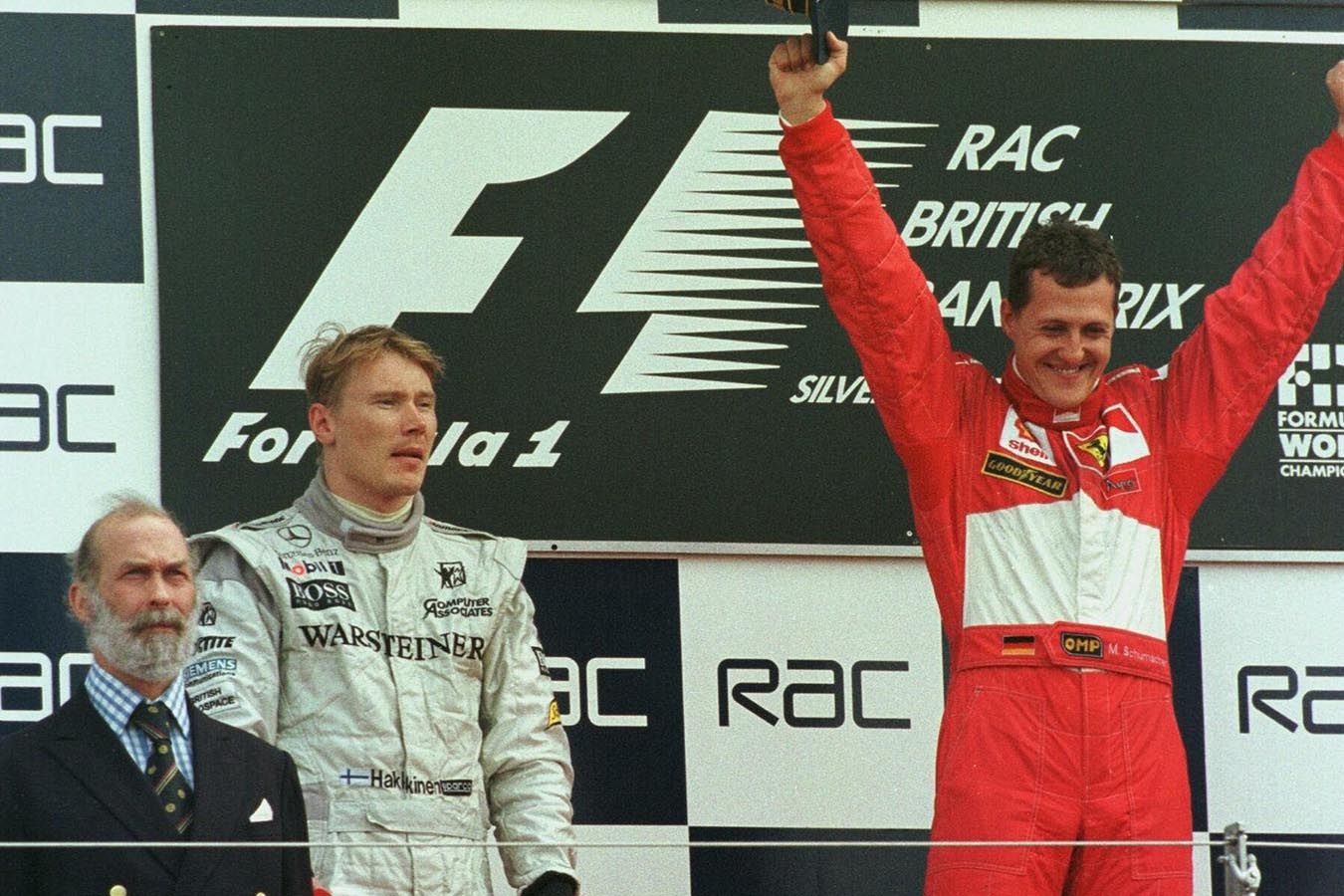 Controversy erupted, and after some discussion results emerged with Michael the winner by 12 seconds, with the 10 second penalty taken into account. Had he taken a stop and go in race conditions, and lost time coming in and out of the pit-lane, Mika would have won.

Instead another McLaren British GP victory would have to wait for another day. However, Mika had at least bagged some priceless points, despite his two excursions – and they would prove to be vital come the title showdown in Suzuka...