The history of Bruce and the Italian Grand Prix

The history of Bruce and the Italian Grand Prix

Bruce McLaren clearly enjoyed the high-speed sweeps of the Autodromo di Monza, for in his Cooper days he logged four consecutive top three finishes in the Italian GP. However there’s little doubt that his most cherished day at the fabled track came not as a driver, but as a team owner. After retiring from the 1968 event he watched countryman Denny Hulme take the sister car to victory on Scuderia Ferrari’s home turf.

Bruce first went to Monza in 1959, his maiden season as a Formula 1 driver, for Cooper. He was very much playing a supporting role to title-contending team-mate Jack Brabham, and indeed in the race he was dutifully following the Australian in sixth place when the car failed on him.

“We were bombing down into the South Curve and I was easing my foot off the throttle when a rod went through the side of the engine with colossal bang,” he wrote in his book, From the Cockpit. “With no braking from the defunct engine I went into the corner too fast and, with no sane hope of making it, braked hard and skidded nose-first into a bank.”

He escaped unhurt, and next time out at Sebring he made amends by scoring his first Grand Prix victory.

He then missed the 1960 Italian GP, held that year with the notorious banking included in the layout, due to a boycott by the British teams.

“This steeply banked oval circuit, used mainly for record breaking attempts, had become bumpy, and was dangerous not only if a driver lost control over the bumps, but also because banking of this nature imposes a far greater load on the suspension. All sorts of mechanical components could either give trouble, or fail completely.”

The banked layout was retained for 1961, and this time the British teams did contest the race – an event that was to be marred by an appalling tragedy that Bruce was to witness in person. That season had developed into a battle between Ferrari team-mates Phil Hill and Wolfgang “Taffy” von Trips, a contest that was sadly resolved by a clash between the German and Lotus driver Jim Clark. 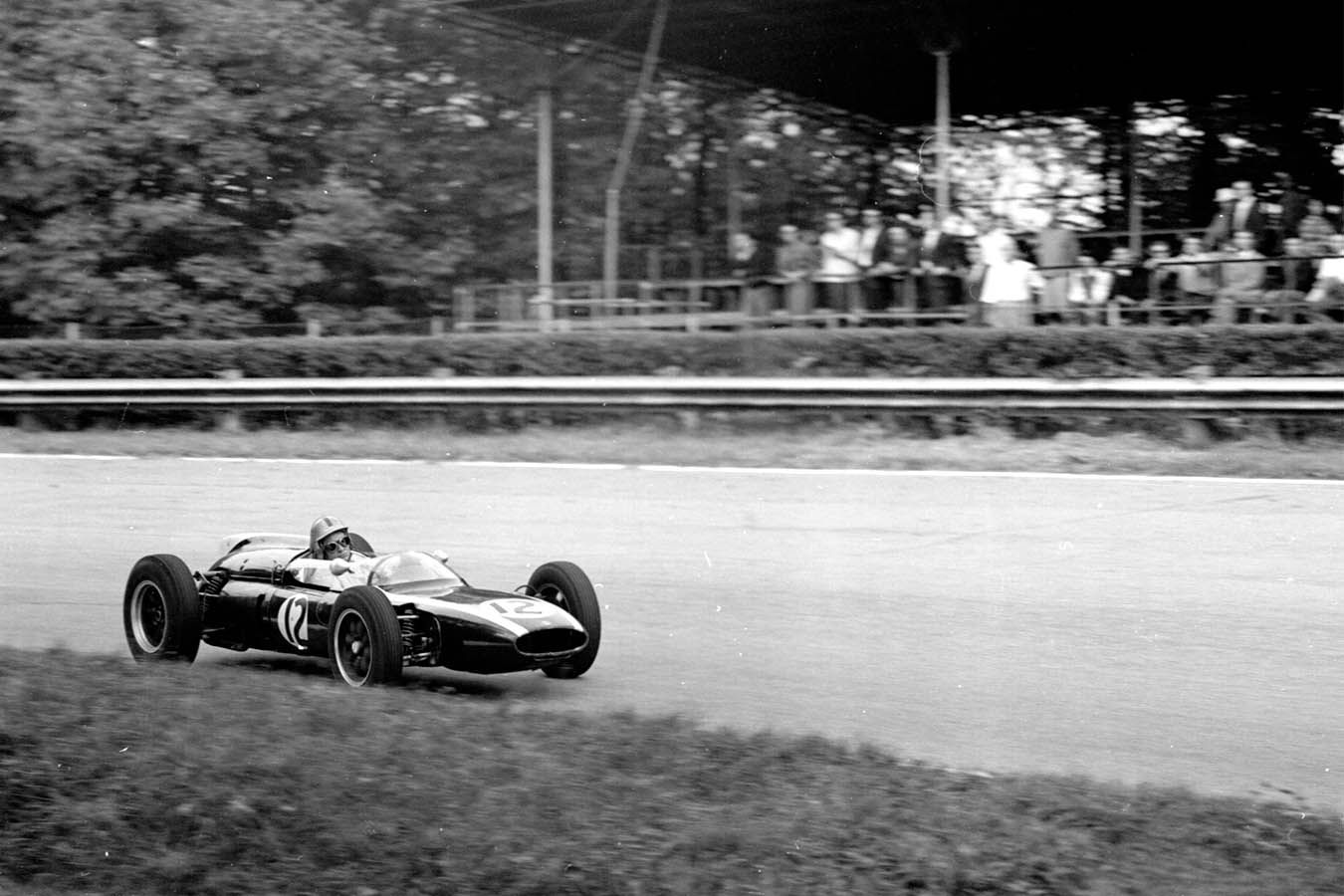 “Soon after the start two cars touched,” wrote Bruce. “One of them, the Ferrari of Von Trips, climbed a bank and ran along a safety fence, knocking down many spectators and throwing out the driver.

“I was with a group of cars a couple of hundred yards behind when it happened. Our first warning was a huge cloud of dust, as one of the cars in the group ahead shot on to the grass at the side of the road. We were too busy trying to slow down and find a clear path through the wreckage to look closely at what had happened. We just hoped that everyone was all right and raced on.”

As was always the case in those days the race continued, and Bruce eventually made the top three.

“I sat close behind Dan Gurney’s Porsche until he dropped out with transmission failure and finished third as the first four-cylinder car and first British car across the line.”

It was only then that Bruce learned that not only had Von Trips been killed, but that the accident had also climbed the life of spectators. The tragic toll was eventually confirmed at 14.

“Dinner that evening was very quiet. Someone suggested the best thing to do was have a party in the bar. ‘You can’t have a party after a day like this,’ came a shocked reply. ‘The last thing Taffy would have wanted was you lot sitting around moping,’ said one of his friends. I guess he was right. Most people managed to forget at least some of the events of the day in the hours that followed.”

The 1962 race was an altogether happier experience, but it had the same outcome for Bruce as he again finished third, beaten only by the team that won that year’s World Championship: “After a race-long slipstreaming dice, which ended with an out-fumbling match against Willy Mairesse’s Ferrari on the last lap, I was pleased to place third behind Graham [Hill] and Richie [Ginther] in the BRMs.”

The 1963 Italian race saw Bruce returning to action for the first time since a major accident at the Nurburgring, which had seen him thrown from the car after a suspension breakage. His confidence took a major knock as well, and he worried more about mechanical failures.

“With this in mind I wasn’t happy when a rear hub broke up on the banking, throwing the Cooper sideways at 140mph, during practice for the Italian GP. The rough banking was worrying others, too, and the race was transferred to the road circuit only.

“The usual Monza slipstreaming told the tale of the race. It was my first time back in the Cooper seat since being hurriedly evicted in Germany and I was pleasantly surprised to pass Innes [Ireland], who was stopped on the back of the circuit with a seized engine, and move up to take his third place on the last lap.”

Following his three straight third places at Monza Bruce went one better in 1964. By now the Cooper team was not the force it was, so second – behind only the Ferrari of World Champion-elect John Surtees – was a real boost. The following year, with Cooper fortunes fading, he could only manage fifth place.

Fighting for places in 5th position, 1965 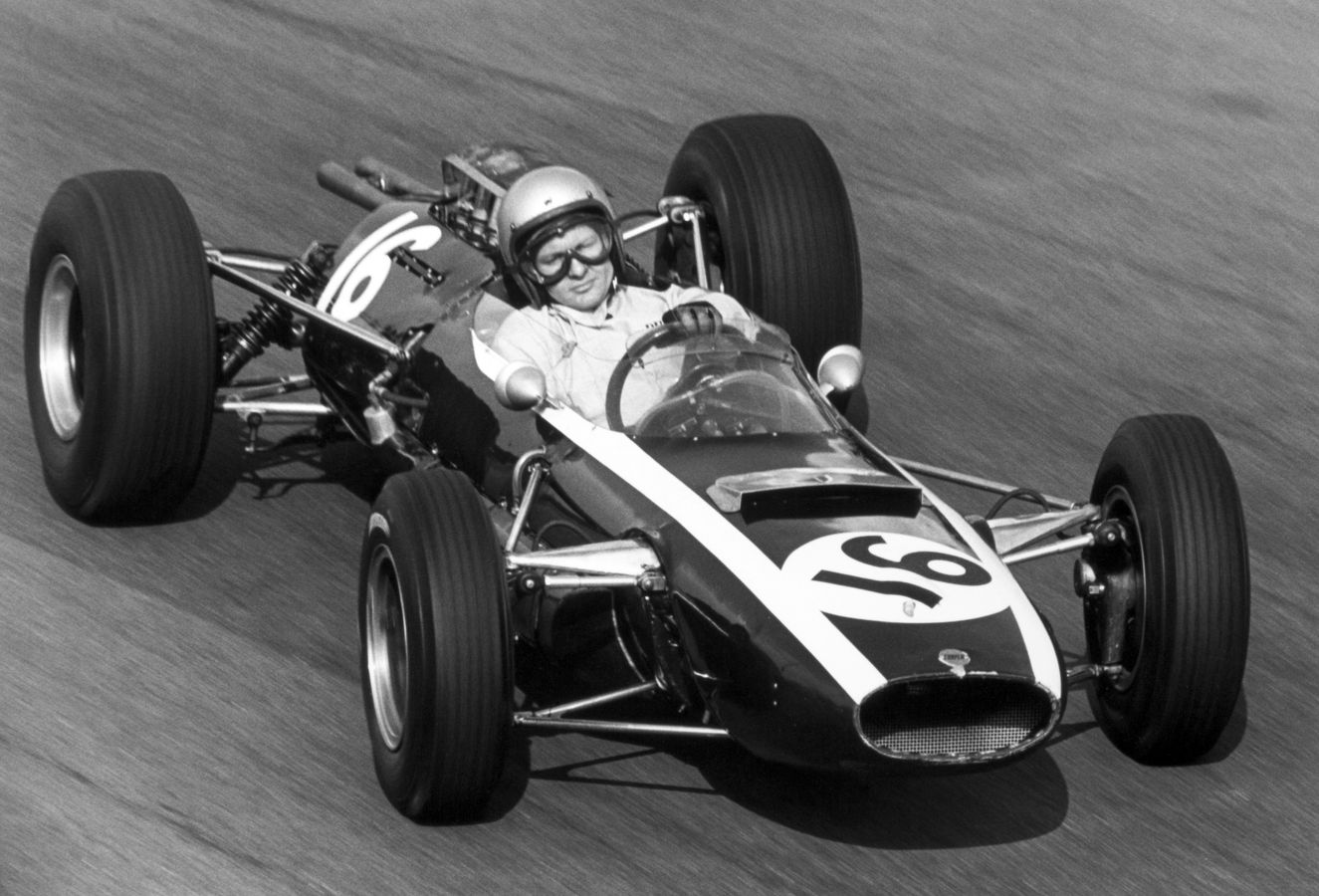 Fighting for places in 5th position, 1965

For 1966 Bruce had his own car and his own team, but he was forced to skip some races due to engine issues, and Monza was one of the events he missed. However, he was back in 1967 with the BRM-powered M5A. That year’s car was painted red, and this being Italy, there was a discussion with officials who felt that particular hue should be reserved for a certain local team! In the end, the car ran unchanged.

Bruce qualified an encouraging third behind Jim Clark and Jack Brabham – the new team’s best-ever performance up to that point – after snaring a sneaky tow from Graham Hill’s Lotus. At a late stage the grid was changed from a 2-2-2 formation to 3-2-3-2, and the story soon went round that the organisers wanted to see a red car on the front row! In the race Bruce initially ran behind the lead group, battling mainly with the Honda of John Surtees.

“I dropped back into what I supposed was my rightful place in the field with the Honda and Chris Amon’s Ferrari,” he wrote in Autosport. “While the two Lotuses and two Brabhams steamed off.

“Although we were all in a group doing 180mph, just hanging there in the slipstream getting towed along was not as exciting as it was for the spectators, because after 10 laps or so you’ve settled down into an established pattern of where you can pass and where you can’t.”

After several top contenders dropped out or fell back Bruce found himself climbing the order while still running with Surtees.

“With 20 laps to go the Cooper [Jochen Rindt] and Ferrari [Amon] dropped back, and Surtees and I were pounding on by ourselves. Then my engine blew up with a broken cylinder liner.”

Much to Bruce’s frustration Surtees would go onto win the race after leader Clark slowed with fuel pick-up problems on the last lap, and the Honda man managed to outfox Brabham to cross the line in front: “If only my engine held together there could have been three of us going into that last corner, although from descriptions I've heard there wouldn’t have been room for three cars!”

In 1968 with the Cosworth-powered M7A Bruce enjoyed his best Italian GP qualifying position, earning second place behind Surtees. He jumped ahead at the start, and became embroiled in a heated slipstreaming battle. He lost the lead to Surtees for a single lap on lap seven, got it back, lost out to Jackie Stewart for a further single lap on lap 12, and again got it back for one more lap. Then Stewart, Jo Siffert and Hulme all took turns to lead. Bruce himself remained in contention until his engine failed.

He watched the rest of the race in the pits as Hulme continued to dispute the lead. Gradually the lead group shrank as top contenders retired, and the Kiwi was eventually left out front on his own. He duly came home almost a lap clear of his nearest rival as the McLaren team logged its second Grand Prix victory, following Bruce’s earlier success at Spa. 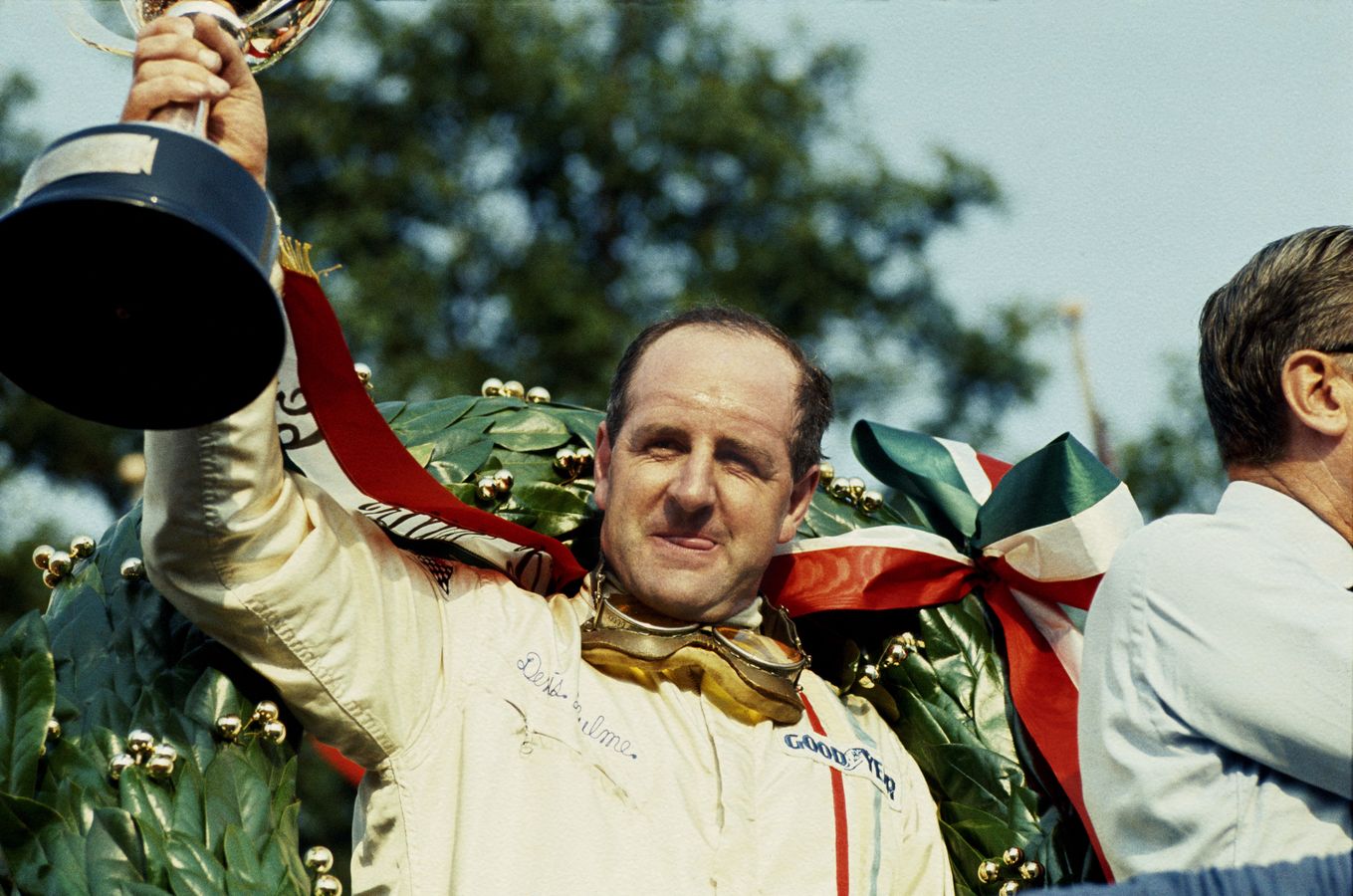 “It was bad enough biting my nails on the pit wall while watching Denny do battle with Siffert, but when the other two dropped out the suspense was even worse as Denny barrelled on through the closing laps well in the lead. There was a battle royal going on between Ickx and Servoz Gavin for second place, but I was just watching the man in the orange car. Now I suppose we’ll have to pay him!”

Bruce would return to Monza one final time in 1969 with the M7C, with which he qualified fifth. He ran in a sensational slipstreaming lead group for the whole race, and was still in contention on the last lap – but unfortunately in the sprint to the line he was left at the back of the surviving quartet, finishing fourth just 0.19s behind winner Stewart.

Sadly Bruce would lose his life before the 1970 event. Incredibly the next McLaren win at Monza would have to wait until Niki Lauda’s triumph in 1984, but the team that bears Bruce’s name has gone on to enjoy many more successful days at the famous circuit.