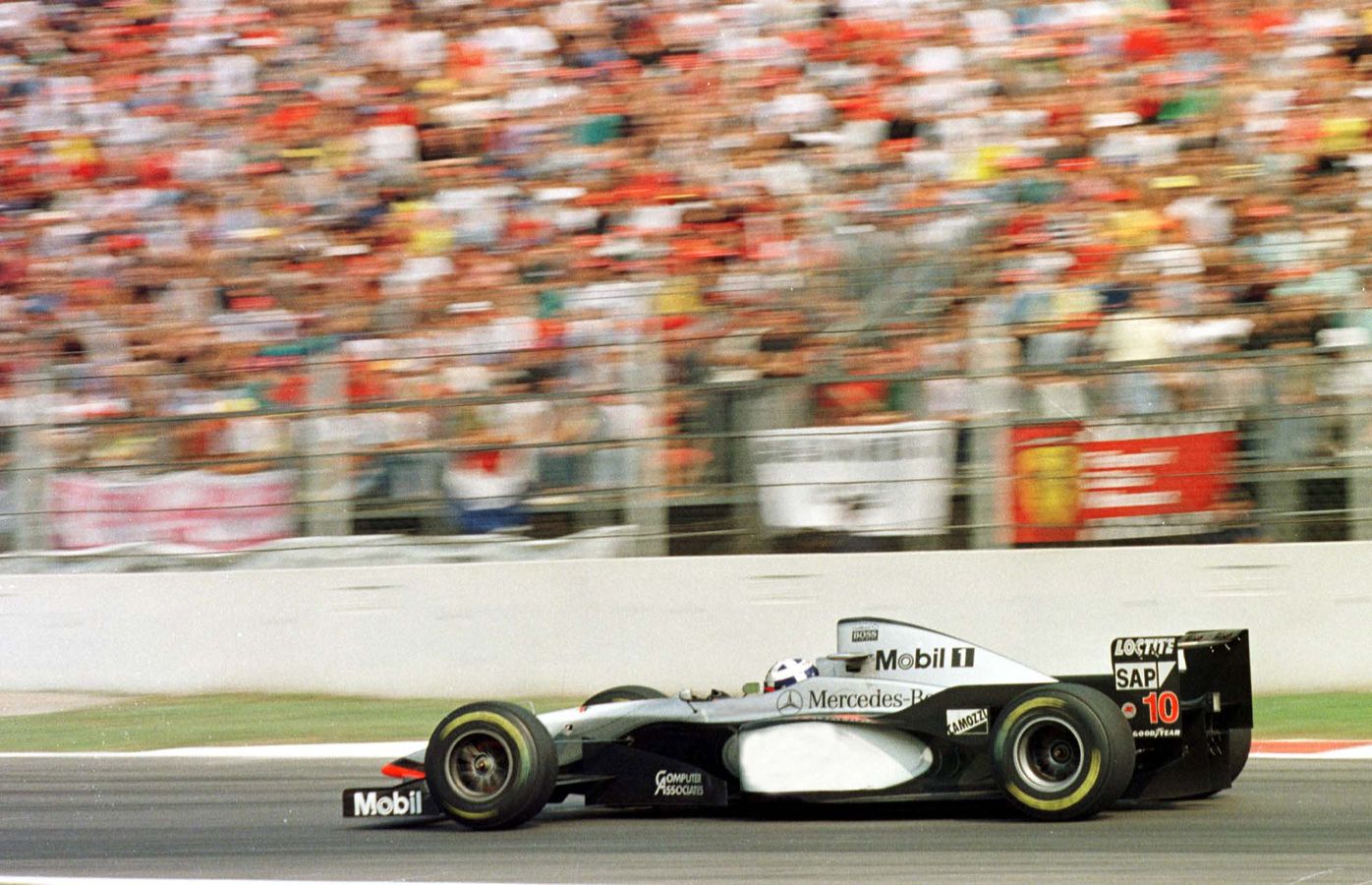 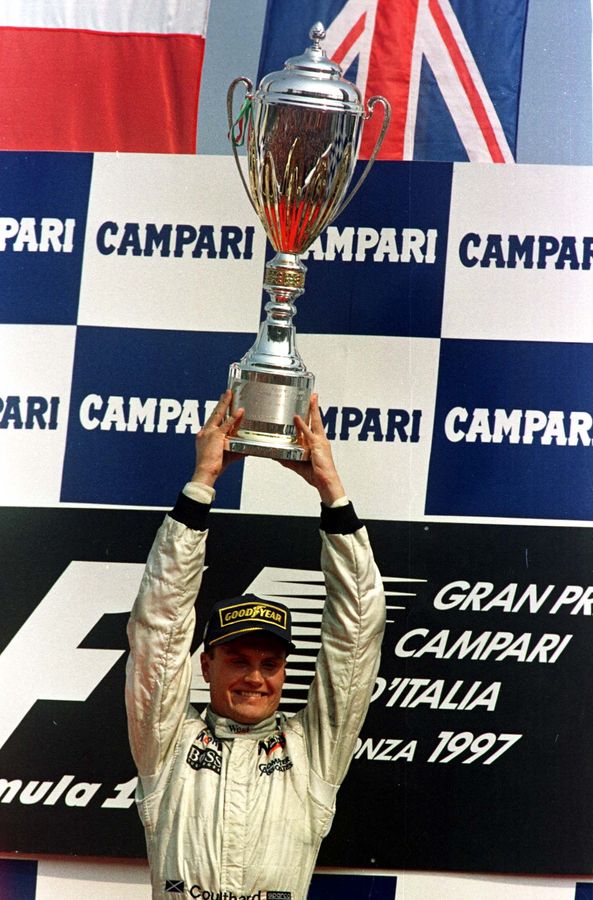 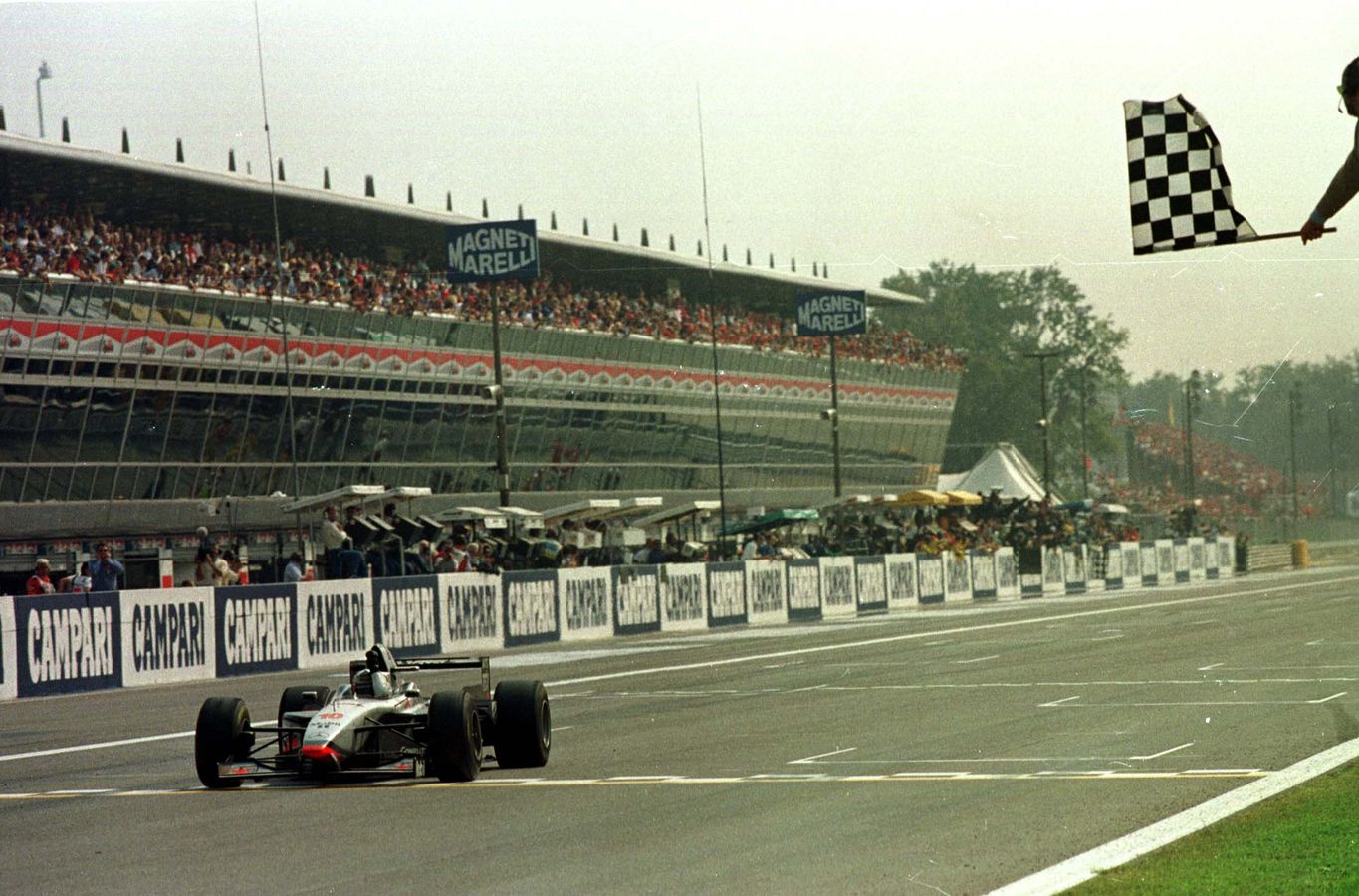 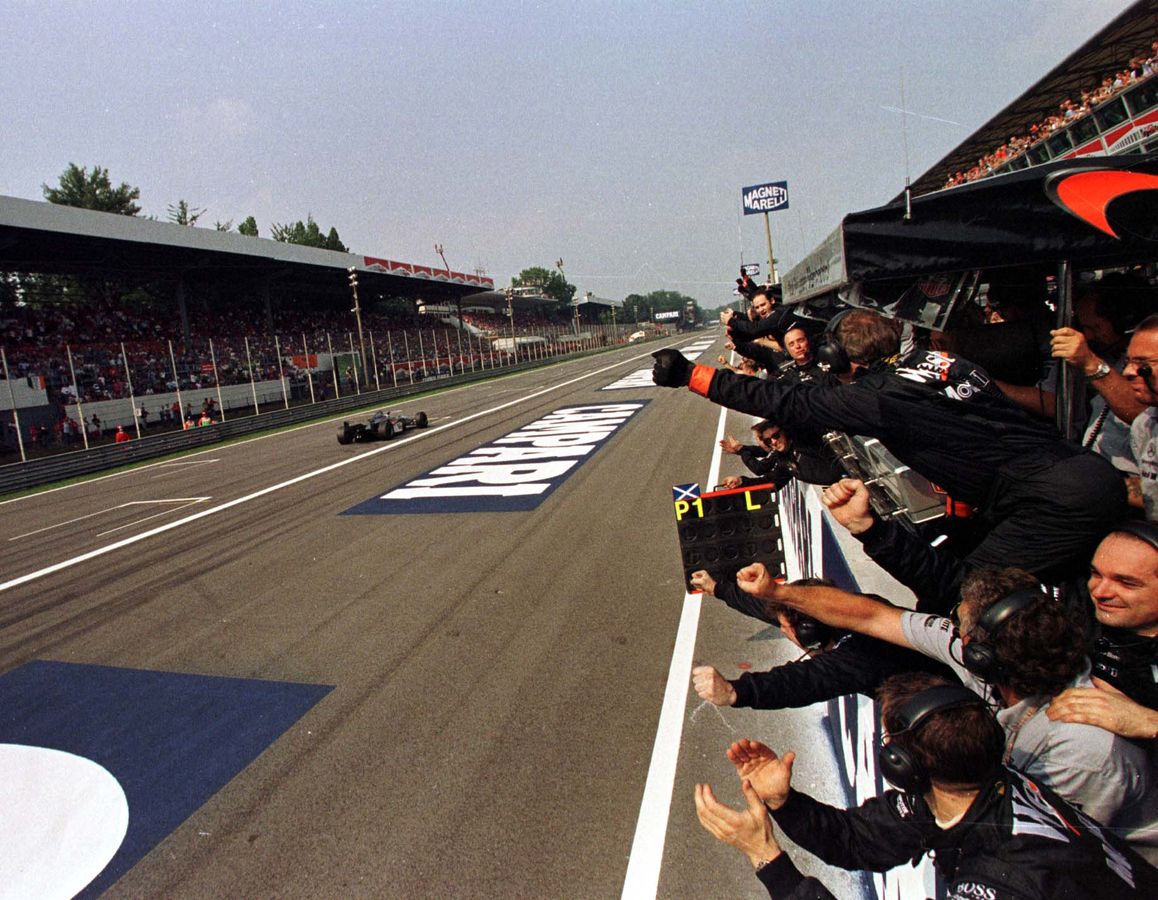 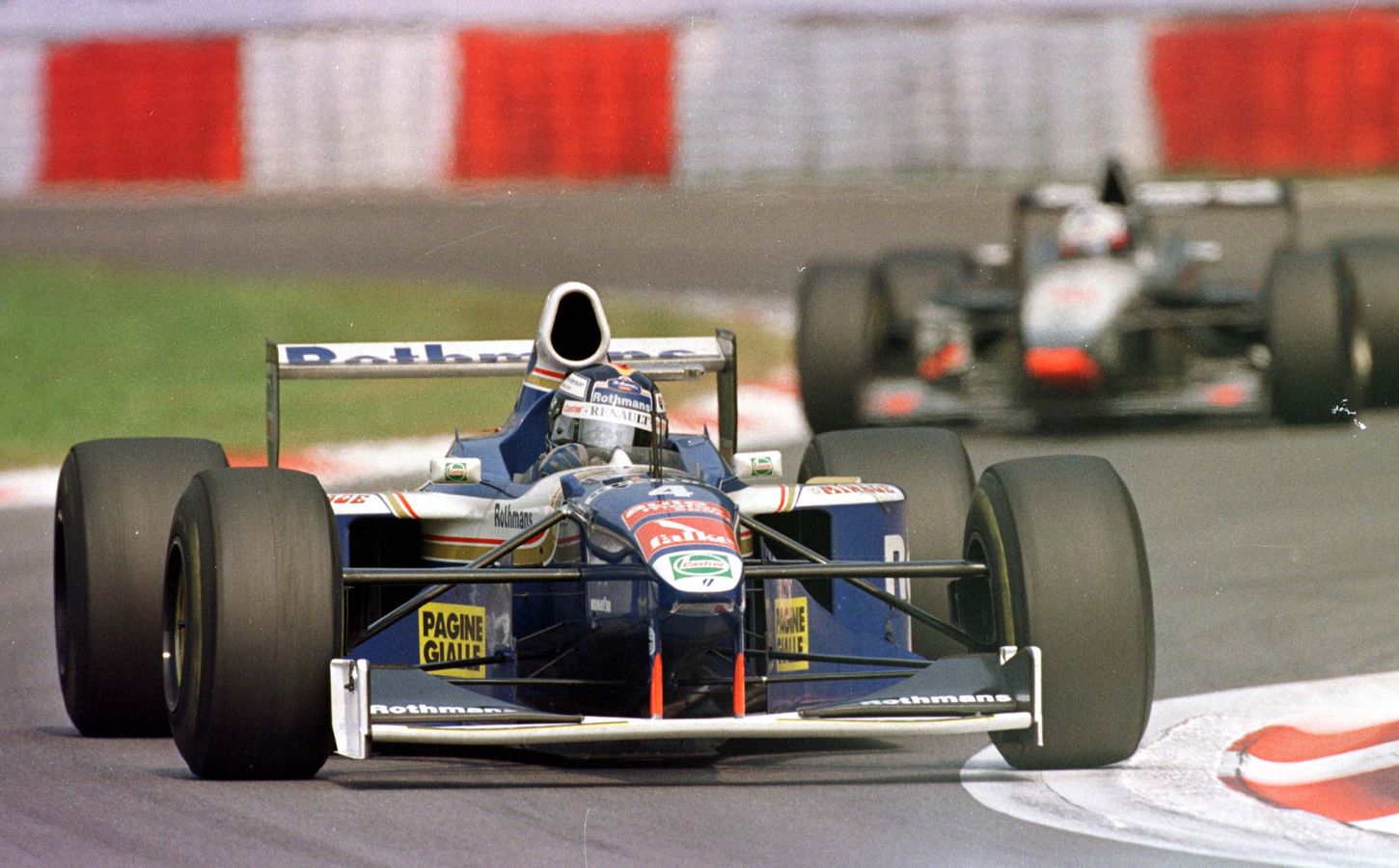 Of course, any victory at Monza in front of Ferrari’s home crowd has a sweet taste to it, but this was important in other ways too.

Helped by some attrition David had won the opening race of the 1997 season in Australia, ending a three-year victory drought for the team, and seemingly signalling a fresh start with the new silver/grey livery.

However, by race 13 in Italy there had been no more successes, and the season has developed into fight between Ferrari’s Michael Schumacher and Jacques Villeneuve of Williams.

But there had been clear signs of progress in the McLaren camp. At Silverstone Mika Hakkinen had led only to retire with an engine failure, and it was evident that the MP4-12 was becoming more competitive – and yet, frustratingly, a second '97 success continued to elude the team. The wait came to an end at Monza.

Not that qualifying in Italy gave any sign of what was to come. Indeed the weekend started disastrously for McLaren when Coulthard suffered an engine failure on Friday, and team-mate Hakkinen spun off on the Scot’s oil!

Jean Alesi gave his former team Ferrari something to think about when he put his Benetton on pole, with Williams man Heinz-Harald Frentzen joining him on the front row. Giancarlo Fisichella was an impressive third for Jordan, ahead of Villeneuve.

The McLarens shared the third row, with Hakkinen fifth, and Coulthard sixth, the pair separated by just 0.007s. The big surprise was that World Championship leader Schumacher was down in ninth, ahead of Ferrari team-mate Eddie Irvine.

Sunday morning began to look promising when Hakkinen and Coulthard were first and third in the warm-up, split by Ralf Schumacher in the second Jordan. And from there, the day got better. David made a great start and had a strong first lap, shooting past second row men Fisichella and Villeneuve to claim third, behind Alesi and Frentzen. Mika meanwhile didn’t get away as well, and found himself stuck behind Villeneuve.

“I started sixth on the grid, but leapt up to third after the first corner,” said David. “All those rainy days spent hurtling down to the first corner in karts were coming in handy!”

Alesi opened up a lead of as much as three seconds, but struggling with a handling problem after a small off on the warm-up, he fell back into their clutches. But the Frenchman wasn’t too worried about anyone overtaking – it was evident that up and down the field all drivers found it hard to pass, a trait that continues at Monza to this day.

“I wasn’t trying to pass Heinz-Harald,” said David. “I was just trying to keep calm, and stay out of trouble until the pit stops. I knew we’d have a quicker stop. We were coming in later than most of the others, so therefore we wouldn’t need to put in as much fuel. And that turned out to be the key to getting past Jean.”

On lap 29 Frentzen pitted from second place, but Alesi and Coulthard had more fuel on board, and both stayed out. This was what we now call “Hammer Time,” and both men started to push – David a little bit too hard, as he had a big slide at the Ascari chicane, which fortunately he managed to hold: “I was very fortunate. I was going hard, trying to close in on Alesi, and I put a wheel on the white line going into the corner. It was very lucky that I didn’t go off.”

At the end of lap 32, the McLaren followed the Benetton into the pit lane – and it was here that the race was decided.

In those days of refuelling, all pit stops seemed to take an age compared to now. David’s stop was completed in 7.8s, and Jean’s in 8.7s, and that was to prove crucial. The McLaren accelerated away from its pit box first, and Coulthard seized the lead, having also easily jumped Frentzen, whose slightly earlier stop meant more fuel, and 10.3s stationary.

After that it was a question of reeling off the laps, and David duly came home safely in front of Alesi to the tune of nearly two seconds, logging McLaren’s first victory at Monza since Ayrton Senna scored his last success with Honda power in 1992.

Meanwhile Frentzen took third, ahead of Fischella, Villeneuve and Schumacher, as the tifosi endured a tough afternoon for their favourite team.

Hakkinen should have finished at least fourth, but he crossed the line in a lowly 13th. At times he had the fastest car on the track, but after his stop a tyre delaminated, and he had to come in again. His 1997 luck didn’t seem to be getting any better – but it would change by the end of the season...

The victory had been achieved through a real team effort, with great driving and superb strategy and pit work. It was also a win that had a positive impact on Coulthard’s image, as he remembered in his autobiography: “It was this race that Frank Williams would later describe as one of my greatest, classing me as he did in the F1 ‘elite.’”