The Italian Grand Prix is an ever-present on the F1 World Championship calendar, and Monza represents its last remaining circuit dedicated to pure speed. Like Monaco at the other end of the scale, Monza requires a car outside the normal parameters. With only three chicanes and three corners to link the long straights, downforce is sacrificed in favour of drag reduction, with minimal ‘Monza-spec’ rear wings allowing the cars to accelerate up to top speeds in excess of 360km/h (224mph).

It isn’t quite so brutally simplistic as it sounds. End-of-straight speed is perhaps less important than the velocity a driver can carry onto the straights: the nature of acceleration in F1 ensures that a car carrying an extra 10km/h (6mph) out of the corners will maintain that advantage down the length of that straight.

A lot of attention is paid to vehicle dynamics and setting the cars up to ride the kerbs at Monza’s chicanes. Since the addition of higher ‘sleeping policemen’ behind the primaries, drivers aren’t able to take quite so many liberties, but it’s still important to straighten the line through the Rettifilo and Roggia chicanes and get good exits on the straights. That suggests quite a soft car – but the faster Ascari chicane is more about a quick change of direction, which means suspension can’t be too soft. The fast Parabolica and Lesmo corners would also benefit from harder suspension and more downforce – but the circuit characteristics mean that drivers simply have to do the best they can and hang on with a nervous car.

McLaren’s record at Monza includes ten victories, stretching back all the way to Denny Hulme in 1968. In more recent times, Fernando won here for McLaren in 2007, his first of two Italian Grand Prix victories. 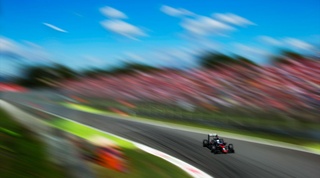