2016 sees the revival of the European Grand Prix, relocated to the Caucasus and a new street circuit layout in the Azerbaijan capital city Baku on the shores of the Caspian Sea.

Little is known about the new circuit other than the outline map – as with any street circuit, until it is first prepared, accurate data cannot be gathered. It is nominally listed with a length of 6.006km (3.732 miles) – making it the second longest on the current calendar, beaten only by Spa. The track will run anti-clockwise and feature 20 corners. In common with the usual limitations of street circuits, it has many 90° turns, which tend to constrict the potential for overtaking – but it appears to have a prodigious pit straight and other high-speed sections capable of providing good opportunities. Teams will use GPS data and maps to create basic simulator programmes – but factors such as grip levels and uniformity of the surface will be something to discover in the first free practice session on Friday.

The European Grand Prix name is as old as the Formula 1 World Championship. First used as an honorific title and attached each year to a specific round of the championship, the race became an entity in its own right in the 1980s, until now a title of convenience when a European nation hosted more than one grand prix. The original venue was Brands Hatch in England, followed by the Nürburgring’s new GP circuit. The race would also be held at Donington Park, in Spain at Jerez and, latterly, on the Valencia Street Circuit.

In total there have been 22 stand-alone European Grands Prix, and McLaren’s four wins have each been special. Alain Prost won at the Nürburgring in 1984 on that circuit’s official debut, while Ayrton Senna won on F1’s only modern-day visit to Donington on a day when he beat not only the competition but also the weather. Mika Häkkinen’s first of 20 McLaren victories came at Jerez in 1997, while Fernando Alonso also survived terrible conditions to triumph at the Nürburgring in 2007, the second of his three European Grand Prix victories. 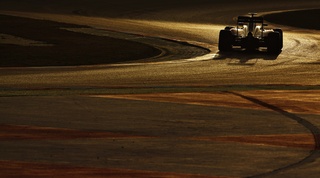