The contrast between the grands prix of Monaco and Canada really shows the versatility of Formula 1, with the relatively low speeds of Monaco followed by the ultra-quick, heavy-braking layout of Montreal’s Circuit Gilles Villeneuve.

Built on a man-made island in the St Lawrence River, the circuit is, in essence, a sequence of straights linked by tight chicanes and a hairpin. Downforce is cut back to medium-low levels for the first time in the season to propel cars to top speeds in excess of 330km/h (205mph). Canada offers the season’s sternest test of brake performance with continuous heavy stops around the lap and not much time in between to cool the pads and discs. Traction is also a concern, with drivers keen to get the power down early coming out of the slow turns. The chicanes also demand a delicate hand with suspension settings: soft enough to ride the kerbs but without compromising the swift change of direction required to dive through the chicanes. It’s one of those things drivers and engineers need to fine tune during practice – so everyone looks for a dry weekend.

Montreal often has other ideas, and rain is at least as common as blazing sunshine. Neither eventuality seems to affect the crowd, however, which always fills the grandstand and makes the Canadian Grand Prix one of the most enjoyable at which to work.

Fernando took victory here in 2006, while Jenson won for McLaren in 2011, one of our 13 Canadian Grand Prix wins. With the greatest of respect to the stellar list of names that have gone before, it’s difficult to imagine a finer victory that Jenson’s, completed in atrocious weather conditions, involving a red flag and a record six safety cars. Jenson, who received a drive through penalty and made five pit stops, was running last well into the second half of the race. He took the lead coming into the final sector of the final lap. It simply doesn’t get more dramatic than that. 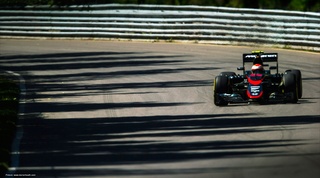