The British Grand Prix is one of only two ever-present races on the world championship calendar and its appeal has never been greater. The regular sell-out crowd makes the race a season highlight, especially for those teams that regard it as their home race.

Despite being ten races into the 2016 season, the challenge provided at Silverstone is again different to that which has gone before. While several other circuits feature the high speeds and rapid changes of direction that characterise Silverstone, they tend to be scheduled after the summer break; the British Grand Prix, therefore, tends to provide a good indicator of things to come in the second half of the season.

Silverstone tests the aerodynamic prowess of a chassis, in particular around what is now the back of the circuit at Copse corner and the Maggots-Becketts-Chapel complex, 300km/h+ (186mph) turns all with a degree of uncertainty as to whether they are flat-out or require a small feather. The new infield section of track introduced in 2010 still divides opinion, but the choice of lines through the hairpins had added something extra to the challenge of Silverstone.

Historically, the circuit is tough on tyres as a consequence of the lateral loads through the high-speed sections. It is, however, gentle on brakes – perhaps too gentle as, in a direct contrast to Montreal, the long gaps between braking events can see drivers struggle to generate temperature. In the modern era this also diminishes the utility of the MGU-K. 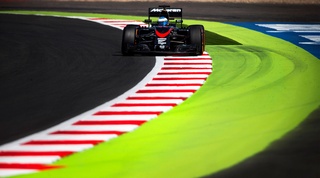