The penultimate race of 2016 sees F1 make its annual visit to South America. The most memorable feature of the ultra-compact Autódromo José Carlos Pace, aka Interlagos, is the long flat-out section, climbing the hill from the Junção corner, up over the start-finish line and then plunging down into the braking zone for the tight Senna S chicane. It’s a prime overtaking location that frequently ensures a dramatic Brazilian Grand Prix.

Despite not being the most flowing of circuits, many of the infield turns at Interlagos are medium to high speed and require a strong front end. This is balanced by the need for a car with a good change of direction through the slower Pinheirinho section in the middle of the lap. Here, and at Junção, good traction is vital.

McLaren has dominated the Brazilian Grand Prix with a dozen victories. Eight of these have come at Interlagos, of which the most recent was a quite brilliant drive by Jenson, mastering changeable conditions in 2012. Undoubtedly the most popular victories, however, were those of our Brazilian World Champions: Emerson Fittipaldi won on the longer Interlagos circuit in 1974; Ayrton Senna on the shorter in 1991 and 1993. Rather less popular with the Interlagos crowd but infinitely more dramatic, was the fifth place for Lewis Hamilton in 2008, which crowned our most recent Drivers’ Champion. The circuit has happy memories for our current line-up also: the three World Championships won collectively by Fernando and Jenson were all sealed at Interlagos. 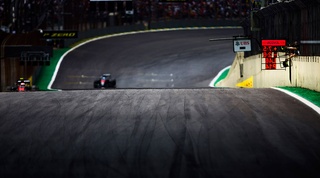