It’s easy to run out of superlatives when talking about the Circuit de Spa-Franchorchamps. ‘The Beast of the Ardennes’ showcases Formula 1 at its fastest, most daunting best, replete with history but just as exciting and challenging today as ever. Popular with spectators for the overabundance of wonderful viewing locations, and popular with drivers for the fast, flowing examination of talent it provides.

Setup for Spa is a tricky proposition. The fast first and third sectors are split by the technical turns of the middle. Bias the setup in favour of the higher downforce Sector Two and the car is vulnerable for the heavy braking zones at La Source, Les Combes and the Bus Stop; set up with skinny wings for high-speed performance and time will be lost in the middle of the lap. Choosing the right level of compromise often includes a degree of informed guesswork as the ‘right’ solution is often a moving target.

That isn’t helped by the notorious Ardennes weather. Mixed conditions are normal, with the topography of the circuit meaning it’s perfectly possible for some parts of the lap to be wet while others are bone dry. The length of the lap is also a factor: at 7km (4.3 miles) long, making the wrong decision for tyres causes bigger problems than would be the case at shorter circuits.

Spa-Francorchamps was the scene of Bruce McLaren’s final Formula 1 win. The 1968 Belgian Grand Prix was also our first, and the only victory Bruce took for his eponymous team. We’ve had 13 more since then, including 11 more at Spa, the latest of which was a lights-to-flag win from pole for Jenson in 2012. 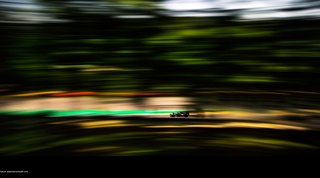