Every Formula One circuit has the capacity to produce a thrilling grand prix – but Montréal’s Circuit Gilles Villeneuve delivers more often than most. In part this is responsible for the race’s enduring popularity – but there’s also the welcome provided by lively, vibrant Montréal to thank for that. No other city celebrates the F1 weekend in quite the same style as Quebec’s metropolis.

Constructed on an artificial island in the St Lawrence River, the circuit features an atypical mix of very high speeds and very close walls. Characterised by tight chicanes providing links between a series of straights, it’s the first opportunity of the season to see cars in medium-low downforce trim – and while that generally garners the technical headlines, it’s not necessarily the area on which the team is most focussed over the weekend.

Suspension is a headache in Montréal, with the contradictory demands for a soft car that rides the chicane kerbs well, set against the requirement for a stiff car for a swift change of direction in those same chicanes. Finding the best compromise is a delicate business that often involves a great deal of empirical testing during the practice sessions – while other races would see the brunt of this work done in simulation, the harsh Canadian winters and baking summers tend to buckle and break the surface, meaning the Canadian Grand Prix track is never the same twice.

Another factor that occupies the team’s attention on Fridays is brake temperature. Canada is the heaviest braking circuit in F1; most likely the ultimate challenge for racing brakes anywhere in the world. In common with Monza, Montreal is a stop-go circuit with straights interspersed by chicanes. Unlike the Italian track, however, many of Montréal’s straights are relatively short, making it much harder to cool the carbon discs and pads between braking points. With spot temperatures hitting 1200°C, this is a matter of considerable concern.

McLaren have won more Formula 1 World Championship Canadian Grands Prix than any other team, and are distinct in having its 13 victories shared between the three circuits to hold the race. Both Fernando and Jenson are winners at the Circuit Gilles Villeneuve – with Jenson’s victory coming in the spellbinding 2011 Grand Prix in which he held every position in the field, was running last well after the half-distance mark, and scrambled into the lead with less than half a lap remaining! 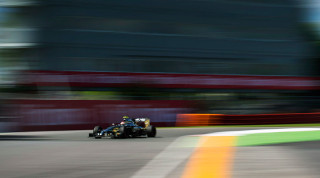