Great Britain is the first of only two ever-present races on the Formula 1 World Championship calendar, and Silverstone is the venue again this year, as it was for F1’s very first championship round in 1950. In the early history of the race, Silverstone shared hosting duties with both Aintree and Brands Hatch but for the last three decades it has been the sole venue of the British Grand Prix, with the event and circuit firmly linked in the minds of the public.

The layout of the grand prix circuit has seen constant revision over the last 65 years, with the most significant change coming in 2010 when the old perimeter layout was altered to create a new infield section. The new layout, known colloquially as the Arena Circuit, lowers the overall speed of the lap but introduces more guile with the addition of low speed corners and a choice of racing lines around the eponymous Arena.

Silverstone remains a power track, however, with the run from Woodcote corner to Stowe one of the most exhilarating in racing. F1 cars take this section of track almost flat-out with only minor lifts for Copse corner and in the Maggots-Becketts–Chapel curves. It is the word ‘almost’ that makes this section of the circuit both difficult and a firm driver favourite. There are definitely elements or risk and reward to balance when pushing hard. It is a spectacle rarely equalled in F1.

Roughly two-thirds of the lap is spent at full throttle – and, with limited braking points, recovering energy is a difficult proposition. It’s also responsible for the circuit being notorious for causing the opposite problem to Montreal: drivers struggle to keep temperature in their brakes.

Of McLaren’s 14 British Grand Prix victories, 12 have come on the Northamptonshire circuit – victories that have been made sweeter thanks to the overwhelming presence of so many McLaren fans in the grandstands. 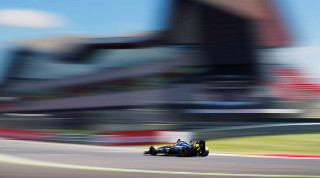