Formula 1 ends the season with a day-night race at the imposing Yas Marina Circuit. As a venue for a season finale, Yas provides plenty of opportunities for spectacle, and a real challenge with which to decide a title or two. It is also a holiday destination which makes the most of its grand prix with a range of outside attractions that pulls in one of the most cosmopolitan crowds of the year – many of whom will fit the grand prix into schedules taking in the nearby theme park and rock concerts that support the event.

It is not uncommon to see a racetrack with a good mix of characteristics, it is, however, rare to see them quite so delineated as they are at Yas Marina. The first sector is characterised by high-speed corners and the need to dial understeer out of the car, the second by two long straights separated by a chicane, while the final sector is a low-speed street section of track requiring cars with swift changes of direction and an ability to ride fairly high kerbs.

Another factor thrown up by the unusual timing of the Abu Dhabi Grand Prix is a circuit that will cool rapidly as the race progresses into darkness. It makes Yas a very attractive testing venue but something of a headache for race engineers. 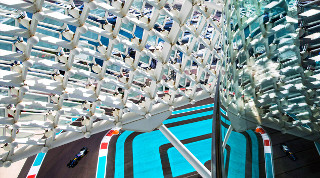