The Circuit of the Americas (COTA) was an instant hit with drivers when the US Grand Prix was revived in 2012. This brand new track on the outskirts of Austin attracted a spectacular crowd to the Texan capital, vindicating the gamble to take Formula One out of its comfort zone.

The new circuit features several sections of track that bear more than a passing resemblance to more-established grand prix destinations, including a sweep of high-speed bends reminiscent the Maggotts-Becketts-Chapel complex at Silverstone. COTA’s signature corner, however, is completely original: the daunting Turn One is approached uphill and blind. It offers a choice of several different racing lines and an excellent overtaking opportunity.

McLaren won the inaugural grand prix at COTA with Lewis Hamilton delivering in the MP4-27. It gave the team and Hamilton back-to-back USGP wins, albeit with a long gap back to the preceding race, held at Indianappolis in 2007. These are the latest of McLaren’s dozen victories in America – but our history goes back further still, to Bruce McLaren who, at the tender age of 22, took his debut F1 win in Sebring at the 1959 United States Grand Prix. 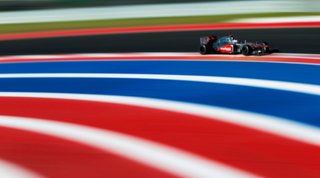