“This looks like being a decent opportunity for us”

The team undertook a busy aero evaluation programme during both sessions as they worked to understand and measure the effectiveness of a suite of new components introduced for this weekend. The improvements look positive, although the engineers will further examine the data gathered today before moving forward with the parts for FP3 and qualifying tomorrow.

This afternoon, running on the markedly faster Option tyre, both Kevin and Jenson posted impressive times, finishing the session in sixth and seventh positions respectively.

“It’s a nice track. It’s very warm and humid out there, and it gets extremely hot inside the cockpit, but it’s a good feeling to drive around this place.

"It’s still difficult to say where we are right now, pace-wise, but I think we ought to be okay. We’re still trying to evaluate and get the best from the new package – but we’ll study it carefully tonight and see if we can get any more out of it for tomorrow.

“Today’s runs showed us that the Option tyre wears out very quickly; the Prime lasts longer and is more consistent, but we’ll look more closely tonight so that we can get a better idea for tomorrow.

“Hopefully, we can improve and find a bit more pace.”

“It’s always good getting to grips with this place – it’s so different from most of the circuits we visit, and it’s such fun.

“We tried a few things on the set-up this afternoon that didn’t work so well for us; but at least we know what to do tomorrow, and, all things considered, it’s not looking too bad, particularly compared with some of the others around us.

“The difference between the two tyre compounds is particularly apparent around here – it’s around 2.5s per lap – and I can’t see that changing over the course of the weekend. We normally don’t profit from that, as we’re usually very good on the Prime tyre, but this looks like being a decent opportunity for us, particularly as qualifying is so important here.

“In terms of radio traffic, I think the situation has ended up without much being taken away. They’ve stopped the engineers from coaching the drivers, but I’ve never been coached around a lap to go quicker, so not much has changed for me personally.” 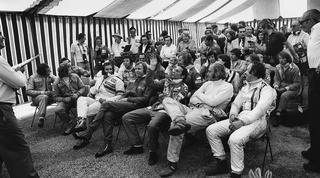 Making (non)sense of the 2015 silly season

“There’s a certain magic – a je ne sais quoi – to the Singapore Grand Prix: it’s an incredible, unbelievable race. And, even on the first practice day, it’s clear that this is no usual racetrack, and no ordinary event. These cars look spectacular around here, and it appears that we’ll have a close, unpredictable and exciting race on Sunday.

“In terms of our own preparation, today has been both problematic and productive: problematic in that not everything we tried proved fruitful, but productive in the sense that we moved quickly through a busy aero programme, gained a stronger understanding of this weekend’s package, and look like being respectably competitive for the remainder of the weekend.

“There’s a lot of work left for our mechanics and engineers tonight – we gathered an awful lot of information from our aero and set-up runs, and I think we can further improve for tomorrow.”

Making (non)sense of the 2015 silly season