"We got the best out of what we had"

A case of slightly mixed fortunes for McLaren today.

Kevin drove beautifully throughout all three qualifying sessions, establishing himself in a solid eighth position in Q1, Q2 and Q3. A position in the top 10, after a couple of difficult races for the team, was a great reward for Kevin, and sets him up well for an attacking race tomorrow.

Jenson had been matching Kevin’s pace all weekend, but struggled in the critical Q2 session, where he failed to set a representative time on his final run using the Supersoft tyre. With the track appearing to lose grip in the closing minutes of Q2, Jenson was unable to improve on 12th fastest time.

We will start the Monaco Grand Prix in eighth (Kevin) and 12th (Jenson).

"I’m not completely happy to be starting eighth, but we pretty much got the best out of what we had; maybe seventh would have been possible – at a push.

"It’s always a challenge to hook up the perfect lap around here – and it never really feel like you succeed. This is a street circuit, and it’s bumpy, with barriers and walls right at the apex, so you make little mistakes and corrections, and always feel like you could have gone a little closer to the barriers.

"Nonetheless, the car felt really good – it’s just frustrating when you see the laptimes, because it feels like we should be higher up.

"We can be reasonably happy with today. Tomorrow, we need a good launch, a good first lap, and to stay out of trouble – then maybe we can score some solid points tomorrow."

"On the first lap of my final run in Q2, I came across one of the Toro Rossos at the Swimming Pool. I don’t think he initially saw me, then he tried to back out of the corner, but there wasn’t enough room for two cars into the second part of that particular corner.

"The race will be tough starting from 12th position – the tyres last so long around here, so it could end up being quite processional. Maybe somebody will be brave and try some moves and make the race a bit of fun. Let’s see if that upsets the order.

"I’m not hoping for rain on Sunday; no driver likes the wet around here, especially with these tyres – you can’t get enough temperature into them. For everybody’s sake, I think it’ll be better if it’s dry tomorrow.” 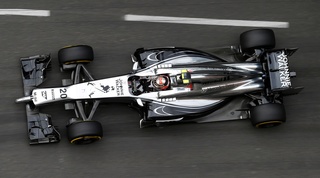 "Getting one car into the top eight was what we were realistically expecting today – and Kevin did a great job to do just that. He’s driven with great assurance all weekend, made no mistakes, and pulled it all together when it mattered.

"Jenson was unfortunate in Q2 – he’d been working on some balance issues all weekend, and couldn’t quite get rid of them. He was unlucky on his final run – he didn’t get a lap in when the tyres were at their best, and he just missed the cut.

"Our focus now turns to tomorrow, and maximising our chances of scoring points with both cars. A circuit like this can always throw up surprises, so we’ll be aiming to have clean races with both drivers, establishing Kevin in the top 10, and helping Jenson move into the points.

"Both drivers have shown great consistency and pace all weekend, and they’re both capable of mopping up places tomorrow. It’ll be a long and eventful race."

Join us on McLaren LIVE for live commentary and team radio chat throughout the 2014 Monaco Grand Prix.