"We can do a better job tomorrow"

Neither driver was able to set a representative lap-time in FP3 this afternoon after both cars were affected by sensor problems. The issues were cured ahead of qualifying.

Heavy rain throughout the late afternoon meant qualifying for tomorrow’s Malaysian Grand Prix was delayed by almost an hour, when track conditions were deemed dry enough for the session to start.

The session was a bit of a scramble: in Q1, both drivers started on Full Wets before rapidly switching to Inters; in Q2, the rain fell more heavily, requiring Jenson and Kevin to run Full Wets; into Q3, further changeable weather conditions prompted Kevin to start on Inters before immediately pitting for Full Wets. By contrast, Jenson felt the conditions were finely balanced between the two compounds, so he opted to run Inters in the hope of swiping a few extra grid positions.

However, heavier rain in the final minutes of Q3 just swung the balance away from him.

"The car isn’t too bad in these rainy conditions, but I think we just got the timings a bit wrong. I’m still learning about Inters and Full Wets, so it was hard to make the right calls this afternoon. But I’m discovering more all the time, and overall I’d say today was good experience for me.

"Eighth isn’t too bad, but it isn’t too good either. It’s certainly not satisfying, because it’s not where we want to be.

"It’s a shame I went off near the end of Q2 – the trip into the gravel caused some damage to the floor – I don’t know how much performance we lost, but I think we could have done a little bit more in Q3 if the car had been in one piece.

"Our car feels good, and it definitely has untapped potential.

"I think we can do a better job tomorrow. The pace probably isn’t quite there yet for us to be able to fight for outright victory, but we’ll be in the mix.

"The decision to run on Inters in Q3 was my choice. I usually make those kinds of calls – and tend to get them right – but I got it wrong today.

"When you’re quick enough to be fastest on Full Wets, then choosing to run on Inters isn’t worth the gamble; but, when you’re fighting at the back of the top 10, it’s worth giving it a go to see what happens. And into that final qualifying session, just as it looked as though the conditions were heading back towards favouring the Inter, it went and rained again.

"Funnily enough, though, I’m not too disappointed that I made the wrong call. We might have qualified only a couple of places higher if we’d called it differently, and that’s not what we’re aiming for – so it was worth a gamble.

"Besides, if it’s wet tomorrow, it’ll be tough for everyone – the tyres give us no grip in these conditions, since all the cars are obviously running lower downforce than last year.

"No-one knows what’ll happen tomorrow – but one thing everyone knows is that, if it rains, it’ll be tricky." 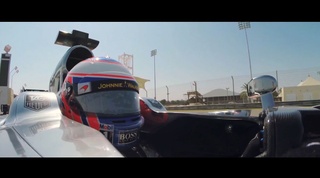 "That was a very difficult qualifying session for all the teams, as is always the case when the weather conditions are wet yet changeable.

"Kevin had a minor ‘off’ near the end of Q2, as you saw, and damaged the fences of his rear diffuser as a result. He duly embarked on Q3 without them, which adversely affected the handling balance of his car. That being the case, his eventual P8 in Q3 was a very creditable performance.

"Jenson moved through Q1 and Q2 smoothly and calmly, as you’d expect of a campaigner as experienced as he. In Q3, however, he opted to run on Inters instead of Full Wets – and, with hindsight, perhaps he may have been able to earn himself a slightly better grid slot for tomorrow had he not done so. But there’s no point in our speculating about that because we’ll never know.

"Besides, in truth, it’ll probably make little difference. Tomorrow’s race may well be affected by unpredictable weather, just as today’s qualifying session was, and for that reason I’m relieved that both our drivers will be starting from positions from which they can drive measured yet spirited races towards points finishes."

Join us on McLaren LIVE for live commentary and team radio chat throughout the 2014 Malaysian Grand Prix.

How fans can take part during race weekend

The words of a winner

30 minutes in the life of a Formula 1 car

VIDEO: Behind the scenes with the MP4-29