After showing promise in all three free practice sessions, both drivers delivered superbly in qualifying this afternoon, McLaren locking out the third row of the grid for tomorrow’s race.

After a number of balance and mechanical issues this morning, Kevin managed to pull everything together for his final Q3 run, qualifying fifth. Jenson seemed to have the upper hand throughout the qualifying session, but lost momentum through the Lesmo corners on his final Q3 run. He was only able to narrowly improve on his Q3 ‘banker’ lap, but nonetheless lines up sixth.

Our focus now turns to tomorrow’s Italian Grand Prix – one of Formula 1’s greatest events. With a relatively narrow window for experimenting with strategy, all our efforts will be on maximising our car’s race pace and tyre management.

“I’m happy – but it only really came together for me in qualifying.

“Fifth and sixth is pretty solid for the team. In fact, I didn’t think our qualifying pace would be quite that strong. I’m really happy to have the power from the Mercedes engine behind me – and hopefully we can challenge the other Mercedes runners in front of us. The Williams cars look a bit stronger than ours, and the Mercs too obviously, but I still think we can give it a go and score some good points.

“The team has done a great job to deliver this Monza-specific package. I have a feeling that our race performance is quite good – perhaps not on raw pace, but it has good straightline speed and feels strong under braking.

“We definitely have a car that we can race.”

“We’ve looked pretty good all weekend, and we gradually tweaked the set-up and balance through every session. On my final flying lap in Q3, I didn’t get a clean middle sector – I lost a little bit of time through the Lesmos – but we probably qualified better than expected.

“I’m a little surprised at how quick the Williams cars have been – we didn’t expect them to be that far in front of us – but we’re the third-best team on single-lap pace, which is nice.

“I think things will be a bit more competitive in the race: our Friday long-runs proved somewhat tricky for us, so we’ll be aiming for a better race tomorrow. It’ll be hotter on Sunday, too, which could potentially help us, so we’ll see what happens in the race.” 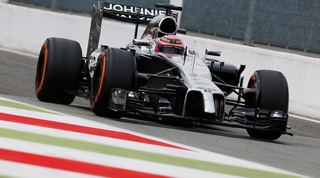 “After suffering a destabilising brake issue in FP3 this morning, for Kevin to pull together a lap good enough for P5 in Q3 today was massively impressive – underlining his talent and character – especially for a 21-year-old guy who’s qualifying for only his 13th grand prix.

“Jenson did an excellent job, too, and will line up for tomorrow’s race alongside Kevin on the third row, in P6.

“Okay, we’re ultimately aiming for a lot better than fifth and sixth, of course we are, but it’s clear that our car’s upward performance trend is consistent and that the momentum of our improvement is also very solid. For both our cars to out-qualify both Red Bulls and both Ferraris feels good, too.

“As I say, we’re not resting on our laurels; we know there’s more to find; but find it we will. In the meantime, I want to thank everyone at Woking for working so hard to improve our car in recent months. Today’s result is a direct consequence of a huge amount of effort on the part of a group of very passionate and committed people, and as I say there’s more to come.”

Join us on McLaren LIVE for live commentary and team radio chat throughout the 2014 Italian Grand Prix.

Monza: "The Greatest Racetrack in the World"

Inside the MTC Motor Show 2014