"It’s always tough in these conditions"

A tricky day for the McLaren team: neither Jenson nor Kevin made it through to Q3 in this afternoon’s qualifying session, which was held in rainy conditions. Both drivers found better performance on the Full Wet tyres during the wetter Q1 session, finishing 10th (Kevin) and 12th (Jenson).

However, in Q3, as the rain lightened and all the teams ran the Intermediate tyres, neither driver could get heat into them. As a result, they finished 12th (Jenson) and 15th (Kevin).

With dry weather forecast for tomorrow, the team is nonetheless confident of pushing for points.

"It’s always tough in these conditions – it was difficult for us to get heat into the tyres, especially with the low ambient temperatures we experienced today.

“I had tyre-shuddering during Q2: shuddering is what happens when you can’t get enough temperature into the tyre. The surface of the tyre is affected when you apply steering lock; the tyre doesn’t grip and it just jumps across the circuit.

“It’ll be difficult in the race tomorrow – we’ll be racing on a green track with no grip because of all today’s rain. So it’ll be about succeeding with the hand you’re dealt.

“So I really hope it’ll be dry tomorrow because in the dry I think we can have a fun race. We’re further back than we’d like, but there have been some pretty good results from this far back already this season.

“We’ll get out there and see what we can do tomorrow afternoon."

"I’m pretty disappointed to have qualified 15th – it’s not great. I don’t really know what happened, we had issues with overall grip – I’m not sure if it was the tyres not being in the correct working temperature range.

“We’ll go back and look at things – I believe we’re better than 15th, so we clearly didn’t get everything right today. Still, we’re not fast enough and we need to find more speed.

“The team is doing a good job of improving things, but it just takes time. These things aren’t fixed overnight, but I have faith in the team. We’ll get there.

“We’ll see what we can do in the race tomorrow." 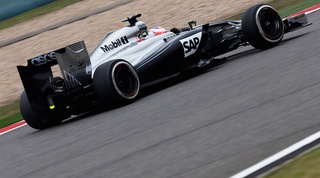 "To put it in simple terms, we performed poorly in qualifying today.

“We know our car is lacking in overall performance, but most notably it lacks sufficient downforce.

“That’s always a significant problem in any conditions, of course it is, but it becomes an insuperable handicap when it’s both cold and wet, as it was today.

“Then you get a downward spiral, because you can’t get enough heat into your tyres, and that’s what we saw today. Our drivers did their best, but in truth they were facing an impossible task.

“Having said all that, both Jenson and Kevin will drive their hearts out tomorrow in an effort to score as many points as they possibly can."

Join us on McLaren LIVE for live commentary and team radio chat throughout the 2014 Chinese Grand Prix.

Shanghai on cue for an F1 spectacle