Formula 1 returns to the Far East for round four of the 2014 world championship, the Chinese Grand Prix. The race takes place just outside Shanghai, China’s industrial and financial capital, and the on-track action is always frenetic thanks to the Shanghai International Circuit’s huge straights, wide run-off areas and notoriously unpredictable weather.

Even now, 10 years after the Shanghai International Circuit first hosted a grand prix, the sheer scale of the venue is breathtaking. Its two nine-storey pit buildings, the 29,000-seat main grandstand and the ornate team pavilions in the paddock give the track a dimension that sets it apart from other circuits around the world.

The 5.451km track was built on marshland deemed unsuitable for housing in 2003. To shore up the wallowing wasteland more than 40,000 concrete pillars were inserted into the ground – something that the track’s designers, Hermann Tilke and Peter Wahl, described as “a huge undertaking”. Construction work was completed in time for the inaugural Chinese Grand Prix in September 2004.

The clockwise layout contains an eclectic mix of corners, from the 270-degree ever-tightening Turn One to the fast esses in sector two. The final sector incorporates the longest straight on the F1 calendar, at the end of which lies the best overtaking point on the lap, a second-gear hairpin. 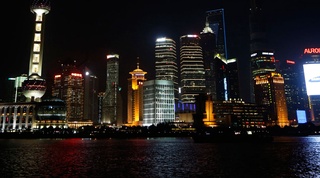 Temperatures are expected to be much cooler than at the last couple of races, and there’s always the chance of rain on China’s eastern fringes in April. Four Chinese GPs have been affected by wet weather, and the 2009 edition was one of only eight races in F1 history to be started behind the Safety Car due to poor weather.

Pirelli will take their Medium and Soft tyre compounds to China, as they did in Australia and Bahrain. The Soft tyre is expected to give better performance over one lap, with the Medium compound, which performs well on cooler track surfaces, expected to be the better race tyre.

McLaren has won the Chinese Grand Prix three times, Jenson magnificently leading home a one-two at a deluged event in 2010. The Shanghai International Circuit is another new racetrack for Kevin Magnussen, but he’s already proved this year that he’s a very fast learner.

McLaren at the Chinese Grand Prix

"After a disappointing race in Bahrain, I think we head to China with a bit of a point to prove – we need to get some points on the board, and get another race under our belts that demonstrates the pace that we feel this year’s car has.

"That won’t necessarily be straightforward – Bahrain showed that, the top two cars aside, the racing this year is fast, fraught and very evenly matched. The margins are so slim that it’ll require us to get everything right: a focused practice, problem-free qualifying sessions and a clean race to try and establish ourselves at the forefront of that chasing pack.

"But I’ve always enjoyed racing in China – I won here in 2010, and I’ve always had good results here for McLaren. While it’s not necessarily a track that perfectly suits our package, I think we can pull everything together and have a stronger weekend."

"I came away from the last race feeling like I didn’t get the maximum from either myself or the car, so the couple of days’ testing in Bahrain, and my preparations for this race, will hopefully allow me to rediscover my comfort zone with MP4-29.

"I’m looking forward to this race – it’s a track I’ve only seen on the TV, but it looks to have a real variety of corners. The first turn looks like a real challenge, but, most interestingly, I think we’ve going to see some spectacular speeds, and a lot of overtaking along the back straight, which is one of the longest in Formula 1.

"The first three races have seen different cars and drivers emerge as the closest challengers to the Mercedes drivers. I still think it’s a bit early to be able to see a competitive order emerge among all the teams battling for points, but our aim this weekend will be to try and consolidate our position at the forefront of that chasing pack."

"It’s never easy to come away from a grand prix with two retirements, so it’ll be important to get some further points on the board in China this weekend.

"I think there are reasons to be encouraged by our general performance: the chasing pack in Bahrain was extremely closely matched, but we were in the thick of it, and see the potential to hopefully edge clear.

"We’re aggressively developing MP4-29: we know we have a good baseline, but it’s a concept that requires development. We have some useful steps in the pipeline, and the key to success this year will be, firstly, the quick translation of those concepts into useful components; and, secondly, getting those steps to work successfully at the track.

"I think we’ve got good correlation between the windtunnel and the track, and our designers are encouraged by what’s already been brought to the track. We’ll have another little step for China, and will hopefully be bringing more key updates to every race.

"The Bahrain race was rightly acclaimed as a thriller, and I think we have all the ingredients in place for another exciting contest in China this weekend."

30 minutes in the life of a Formula 1 car