The Circuit Gilles Villeneuve never produces a dull race. The high speeds and heavy braking zones make it a paradise for overtaking, while the walls which hem the track on all sides provide a drama all of their own, especially around the chicanes that  dare drivers to take just a little more kerb every time pursuit of the ultimate lap…

Braking performance dominates on the Île Notre-Dame. The long, thin course is a stop-start race track, linking straight with chicane with straight with hairpin. It features four braking points with loads in excess of 5G, including the colossal stop at L’Epingle where cars go from 300kph down to 60kph in the blink of an eye – roared on by a vociferous Montreal crowd that might be baking in a midsummer heatwave, staunchly ignoring a torrential downpour or alternating between the two.

The Canadian Grand Prix has been good to McLaren with 13 victories, of which nine have come at this circuit, including a recent hat-trick of wins that included a memorable 2011 victory for Jenson Button that involved six pitstops, two collisions, a drive through penalty, every position in the field and a last lap, last-gasp pass for the lead in the longest grand prix in world championship history. 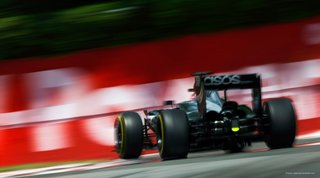 14 moments of triumph and tears at the Canadian GP