The Santander British Grand Prix is an ever-present on the Formula One calendar and Silverstone has hosted the majority of its races, including the first ever World Championship grand prix in 1950. For much of the year this rural location is quiet and unassuming but come British Grand Prix weekend it turns into the centre of the world, thronged with hundreds of thousands of spectators, cars, campers, helicopters and excess.

Silverstone is a monument to speed. The circuit is a power track with fast corners and lightning changes of direction. The revised circuit, altered to accommodate the new pitlane complex, changes the challenge somewhat but after the initial surprise has become a firm favourite among many drivers, adding an extra layer of subtlety to the lap without taking away anything from Silverstone’s traditional thrills.

Twelve of McLaren’s 14 British Grand Prix victories have come at Silverstone, among them wins for home favourites James Hunt, John Watson, David Coulthard and Lewis Hamilton – which is one reason why we’re always guaranteed to see grandstands reassuringly filled with rocket red. 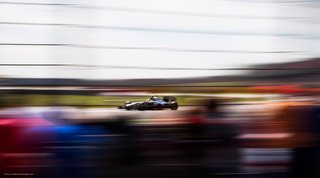