"I simply can’t over-state how much I love driving here; it’s superb fun"

"The conditions were extremely tricky today. In fact I almost failed to make it through to Q2 because I acquired bad flat-spots on both my front tyres at Turn One of my first lap, so I had massive understeer and couldn’t really push. But, despite that, I just about managed to make it through, so that was okay.

"I then made it through Q2, and Q3 worked out pretty well too. I nailed a strong lap and had a good feeling in the car. Okay, P7 might not be a fantastic result, but it’s not a bad position from which to start tomorrow’s race.

"I simply can’t over-state how much I love driving here. It’s truly amazing to drive this track in any race car. It’s superb fun, and hopefully tomorrow we can do what we came here to do, namely get a good result and score some good points.

"A dry race tomorrow would be nice."

"My first run in Q3 was pretty good.

"But, during my second run, on new Inters [tyres], in the slightly drier conditions, I locked up at the top of the hill – and, as soon as you lock up, that’s it really. I went straight on, and that was the end of my lap. I tried to continue, but I was 1.5 seconds down, so I was never going to get that back. It should have been the run that got me the lap-time I wanted, but it wasn’t to be, which was a pity.

"With regard to tomorrow, I’d prefer it if it were dry. The wet is always a real mess here, especially at Eau Rouge. After the first lap it always gets pretty horrible if it’s wet, in fact, so as I say I’d like it to be dry. 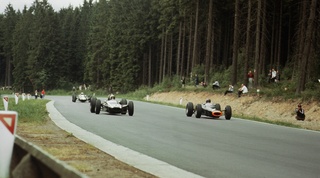 "There’s nothing more challenging for a Formula 1 driver than tackling a wet qualifying hour at Spa, but I’m pleased to say that both Kevin and Jenson met that challenge very well this afternoon.

"Their performances were particularly impressive in light of the fact that their cars were both running low-downforce set-ups, not ideal for today’s wet conditions, but which we’d deliberately selected in anticipation of a dry race tomorrow.

"Kevin did a particularly doughty job, ending up in P7, which was a mighty fine effort, especially bearing in mind that he achieved it with a low-downforce dry-weather set-up.

"Jenson, too, did well, and would have done better still had he not locked his brakes at the top of the hill before Turn Eight when he was running his quick Q3 lap on new inters.

"A dry race is forecast for tomorrow, and both Kevin and Jenson, in P7 and P10 respectively, are well set to put in controlled but combative drives in an attempt to bag a useful haul of World Championship points."

Join us on McLaren LIVE for live commentary and team radio chat throughout the 2014 Belgian Grand Prix.