“With our low-downforce set-up, Eau Rouge is, er, interesting: you’ve got oversteer at more than 300km/h!”

Today was a satisfactory first day at Spa for the McLaren team, both Jenson Button and Kevin Magnussen relishing the challenge of tackling Formula 1’s return to one of the most daunting and most challenging racetracks on the calendar.

As always, FP1 and FP2 were test sessions as much as anything else – but, even so, in running through all the team’s planned programmes, Jenson and Kevin both managed to make good progress in terms of set-up development.

There’s a lot more work for the team ahead, however, and further improvements can undoubtedly be made.

As ever at Spa, the fickle Ardennes weather may play its part; some forecasts are predicting rain for tomorrow; time will tell.

“We found a decent balance here today, but, as always on a Grand Prix Friday, we’re never completely happy.

“On the Option tyre, I’m very happy; on the Prime, Kevin is happier than I am, so we’ve got to work out the reasons for that this evening. In the first sector we’re quickest, in the third sector we’re a tenth or so off the pace, but in the middle sector we’re almost a second down. So we’ll have to work on getting the balance a bit better, and hopefully we can improve in the areas we’re already strong in, too.

“Overall, I’d say our car feels reasonably nice to drive around here, but the circuit demands a low-downforce aero configuration, and that’s given us some areas to work on, especially with the Prime tyre, on which we’re struggling a little as I say.

“But there’s definitely room for improvement, and hopefully we’ll have a good weekend from here on in. Having said that, we don’t really know what’s going to happen with the weather; I think there’s a good chance of rain tomorrow, which will change everything of course.

“Finally, I just want to say something about Eau Rouge. With our low-downforce set-up, it’s, er, interesting. You’ve got oversteer at more than 300km/h, and I admit I let out a few screams inside my crash helmet through there on a couple of laps, especially on high fuel. But this is a track on which you always have moments – and, as ever at Spa, it’s a great experience, and I’m really looking forward to the next two days.”

“I really enjoyed today. Coming back to Spa is always a pleasure, because it’s such a fantastic racetrack.

“Our car feels pretty good here, and I was able to push it today. Even so, we can still improve it, or fine-tune it anyway.

“Personally, I hope it’ll be dry tomorrow, because that’ll give us developmental continuity – and anyway it’s always more fun driving at Spa on dry asphalt. Oh, and by the way, Eau Rouge is still flat, even on high fuel.

“So, in summary, I reckon we’re looking okay, and I’m pretty happy with what we’ve achieved so far.” 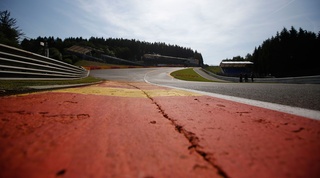 “Today we worked effectively and efficiently, completing our planned programmes for both our drivers, and I’m pleased to report that there were no major issues of concern on either car.

“This morning’s FP1 session was decidedly chilly, but the air warmed up a bit this afternoon, and we saw a track temperature of 32C at one point.

“Both drivers preferred the feel of our car on the Option, which we expect to be our preferred qualifying tyre for tomorrow.

“Kevin was perhaps a smidgen happier with the car than was Jenson, who struggled a little with front and rear lock-up under heavy braking, but that’s an inevitable side-effect of a deliberately lower-downforce aero configuration, which we’ve opted for here at Spa and will persist with at Monza in two weeks’ time.

“Overall, then, I’d say we’re reasonably satisfied with our day’s work, and are now looking forward to many hours’ hard graft this evening, in an effort to optimise our preparation for the morrow.”