"We’ve got a fighting chance of making up places tomorrow"

In qualifying today both Jenson and Kevin tackled Q1 and Q2 confidently, without encountering problems.

In Q3, Jenson drove a flawless lap that was good enough for P7 (which became P6 after Daniel Ricciardo’s demotion), while Kevin ended up close behind in P9 (which became P8).

"Although we haven’t qualified where we’d ideally like to have done, as a team I reckon we’ve done a more or less perfect job so far this weekend.

"It was very tight out there, we did all we could, and we ended up very close to P4; all you can do is get the best out of the car, and that’s what we did here today.

"The four fly-away races are all about picking up points as and when you can. We’ve done that pretty well the first two races, and we’ve got to continue doing that. We’re not the quickest, so we’ve got to make the best of what we have and what we are.

"A podium finish tomorrow would be great, but it’ll be very difficult because the first two places are already fully booked as long as the two Mercedes cars are reliable. But let’s be positive: we’ve got a fighting chance of making up places tomorrow, and third place is only three spots better than where we’ll be starting from [sixth]."

"I’m not entirely happy with my qualifying position today, to be honest.

"We’d hoped that the cool temperatures would confer more of an advantage to us, and help us a little bit more, but it didn’t work out that way. Having said that, Jenson did a very good job, and got a bit more out of the car than I did, and I think that’s probably the most anyone could have got out of it today.

"Our race pace might be better than our qualifying pace was, and we should hopefully be a bit more competitive tomorrow as a result of that. We should be in the thick of the fight for points.

"But, first of all, I need to make a clean start tomorrow. I don’t want any damage to the front wing at the first corner!" 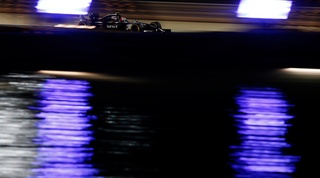 "Obviously, you’re never happy when your cars qualify seventh and ninth, and it’s not much of a consolation to know that they’ll be starting sixth and eighth following the demotion of Daniel [Ricciardo].

"But, having said that, both Jenson and Kevin did a good job here in Bahrain today, keeping their heads during what was a fraught and frenetic qualifying hour, smoothly moving through Q1 and Q2, and securing Q3 grid positions from which we expect them to be able to mount measured yet combative challenges for world championship points in tomorrow evening’s race.

"It’s worth noting that, discounting the two fastest cars, Q3 was very tightly bunched, very close indeed in fact. So, all in all, we’re expecting both our drivers to be able to play a significant part in the battle for world championship points tomorrow."

Join us on McLaren LIVE for live commentary and team radio chat throughout the 2014 Bahrain Grand Prix.