"Hopefully, we can go forwards tomorrow"

"My fastest lap wasn’t too bad – I had a small lock-up at Turn 15, but I don’t think it cost me too much laptime. So, what we have is pretty much everything that we could have achieved today.

"We’ve developed a useful set-up for tomorrow afternoon, and we’ve also fitted a seventh gear that’s long enough to hopefully enable us to do some overtaking. That means I’m looking forward to an exciting race.

"We really need to score some points tomorrow, and I think we’re in a good position to do so."

"On my fastest lap, I lost a tenth and a half behind Kimi [Raikkonen] in Turns 11 and 12. It’s quite frustrating: they’re pretty quick corners, and, when you’re that close to the car in front, it damages your lap. It’s difficult – because most of those corners are blind – but we’ve all got radios, so we should all know where other drivers are.

"It’s a pity: without that delay, I’m pretty sure I would’ve qualified inside the top 10.

"Still, there are positives for tomorrow – we’ve got new tyres for the race; Turns One, Three and Four are always very interesting on the first lap; and we’ve got interesting straightline-speed compared to our rivals – both in terms of ratios and downforce levels – so the first couple of laps should be really interesting for us.

"Hopefully, we can go forwards tomorrow." 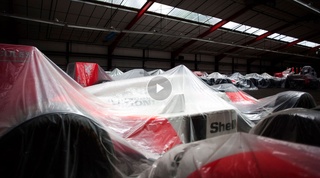 "That was a disappointing qualifying session for both drivers, particularly for Jenson, who encountered traffic on his quick lap that almost certainly cost him the opportunity to graduate through into Q3.

"Still, we’ve proven repeatedly throughout this season that we have greater strength and versatility in the race itself. For tomorrow, we’ve got total flexibility over our strategy, and two strong racers, so we’ll see what we can do."

The dawn of the turbo age