The Korean International Circuit provides the teams with a fascinating technical challenge. The first half of the 18-corner racetrack contains several high-speed corners and a 1.2km straight, while the end of the lap is tight, twisty and hemmed in by walls. Car set-up is a compromise between straight-line speed and low-speed grip.

There are several overtaking opportunities around the lap, the most obvious being into Turn Three. The cars exceed 310kph (and will also benefit from DRS) along the preceding straight: a crest in the braking area also makes it easy to lock a wheel and make a mistake. Other passing opportunities are into Turns Four and 10.

In the three Korean races to date, cloudy conditions have led to low track temperatures. That has made tyre warm-up difficult, particularly in qualifying, and the teams are preparing for more of the same this year. Another natural influence on car performance is the sea-level location of the circuit. The high atmospheric pressure has a positive effect on engine performance and aerodynamics.

Lewis Hamilton had a strong record at the Korean Grand Prix, having finished second in both 2010 & 2011. Jenson’s best result is fourth in 2011. 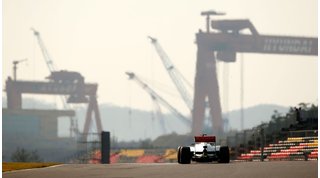 The inaugural Korean Grand Prix in 2010 started with the Safety Car and stopped after three laps due to heavy rain. Re-starting 40 minutes later, Lewis drove a tenacious race to second place after the race lasted 2hr48mins!

In 2011, Lewis ended Red Bull Racing’s run of 16 consecutive pole starts when he qualified first by 0.2s . He ended second place in the race after Vettel passed him on the first lap and opens a gap of 12 seconds during the course of the 55-lap race.