"We have a good chance in the race"

"Ninth was probably the best we could have achieved this afternoon. It was always going to be difficult to beat Fernando [Alonso], but I might have been able to achieve it if I’d done one more lap on the Prime. But we need to look after the tyres for tomorrow, so that wouldn’t have been the right thing to do.

"Clearly, we’re on a different strategy to most of the other cars, so it’ll be very interesting to see what we can do on the Prime tomorrow. There are four other cars inside the top 10 starting on the Prime, so we’ll be looking to take the advantage if the Option-runners pit during the early laps tomorrow.

"I think we have a good chance in the race. Our long-run pace looks pretty strong – so, with a good strategy, I think we can do well tomorrow."

"Running the Prime in Q3 was probably the best strategy call for the race. Of course, that hurt, because my heart was telling me that I ought to be out there [in Q3] on the Option.

"Our qualifying runs on the Option looked really good – I was quickest in Q1 – but the Prime tyre didn’t work as well for us. I found it more difficult because I couldn’t get any temperature into the tyre, so I was about half a second off in the first sector on my run in Q3.

"Still, running the Prime was probably the right thing to do, and I’m sure it’s the best tyre for tomorrow. I’m looking forward to an exciting, eventful and unpredictable race." 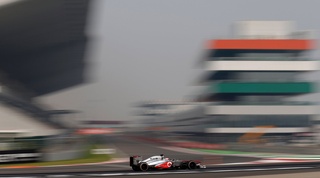 "It’s always tempting to take a short-term view – if we’d gone for the Option tyre in Q3, we could potentially have been halfway up the top 10 – but I don’t think we’d be headed into tomorrow’s race feeling comfortable had we done that.

"Fundamentally, it was about doing the best thing for the race tomorrow. And, if the experience of the last few days is borne out tomorrow, then we’re probably happy that we’re not starting the race on the Option.

"For tomorrow, we’ve very much focused on putting ourselves in the best possible position for the race. We’ve got two very good racers, both of whom have shown impressive flashes of speed this weekend, so I think we’re looking at a competitive showing tomorrow."

On the road with McLaren: tour kit essentials

Hall of fame: US Drivers